Getting gadgets near water is rarely a good idea, but we can understand the attraction in some circumstances. Watching a TV episode in the bath without fear? We like. Third-party iPad 2 accessory makers offer a number of different ways to protect your tablet from moisture. Some offer water resistance, others waterproofing. However, the OverBoard waterproof iPad 2 case is one of the most hardcore of the lot. 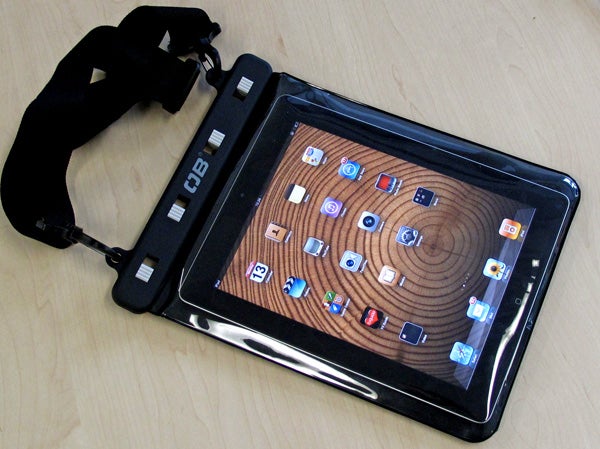 It’s certified to keep your iPad safe to 6m underwater, after which it’s the pressure that’ll cause problems. This case earns OverBoard’s top waterproof rating, making it suitable for snorkelling and other such aquatic exploits.

You wouldn’t necessarily guess at this level of expertise from looking at the thing, though. It is, like many underwater gadget cases, effectively a plastic bag with a seal up top. The bag part is made of biodegradable polyurethane, the top a chunky length of black plastic that seals the bag using four translucent grey plastic sliders. 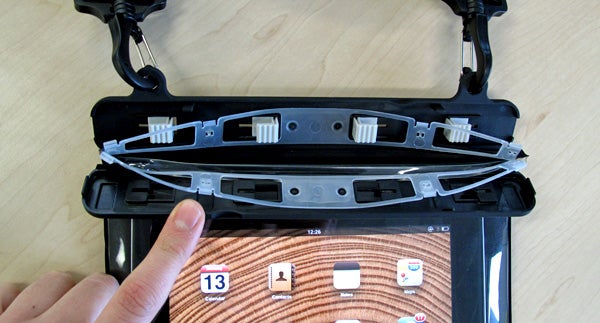 It’s the polyurethane that makes the seal rather than an extra rubber layer, though. The grey inner part is plastic rather than something capable of making a watertight seal itself. 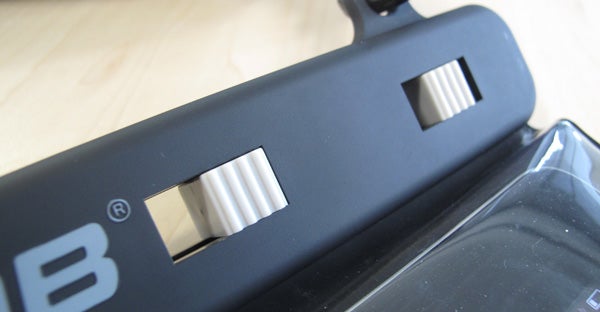 Next to the majority of cases we review, the OverBoard iPad 2 case is ugly, but there are some neat tweaks to the design that make it worthwhile. The back is padded, making holding it surprisingly comfortable, and features a hand loop for one-armed use. The placement of this loop lets you hold the tablet in landscape aspect with your right hand, and portrait with the left.

Although the OverBoard waterproof case blocks off some functionality – the dock port, headphone jack and easy access to the orientation lock switch – there is a little see-through panel for the rear camera. If you’re looking for a scuba camera, though, the iPad 2 is one of the worst gadgets you could possibly choose. Its rear camera is terrible. 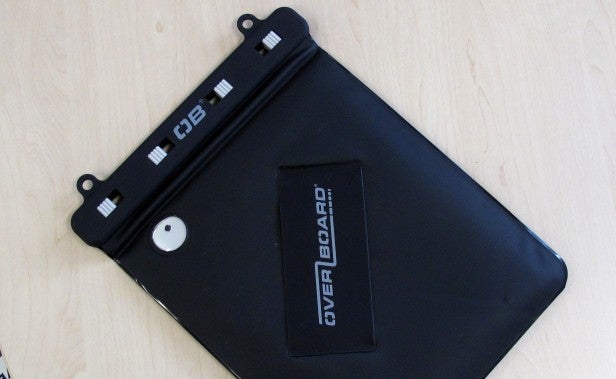 The most important aspect of the OverBoard iPad 2 case is that the front layer gets on perfectly well with the capacitive touchscreen. It’s a higher-friction surface than the glass front of an iPad 2, and as there’s some slack it tends to ruck-up a little under your finger, but there’s no real loss of sensitivity.

Its front doesn’t offer any anti-glare properties, and using the iPad 2 on a sunny beach will remain a reflection-ridden trial. But it also doesn’t spoil the display other than bringing a few additional reflections of its own.

One minor usability issue to the design is that to use the tablet on its side, you have to fold over the plastic top, leaving it resting under your palm. However, it’s sufficiently curved to sit there comfortably.

Other than the case itself, OverBoard includes a hardy, adjustable shoulder strap that grips onto the sides of the top plastic slab and a carabiner to hook onto existing gear in a similar fashion. It will accept devices other than iPads too, as long as they don’t exceed any of the tablet’s dimensions. As long as the device isn’t too heavy, it’ll float too, although we didn’t have a sufficiently-large lake to test this feature out properly.

The OverBoard waterproof iPad 2 case isn’t pretty, but it is very practical. It’s lightweight, ruins none of the functionality you might need in water and offers unbeatable moisture protection, short of placing an iPad 2 with a deep sea diving submarine.

Verdict
The OverBoard iPad 2 case offers superb waterproofing for your tablet, without blocking-off too many of its core functions. It’s not pretty, but it is surprisingly comfortable to use thanks to its very low weight, padded back and handy shoulder strap.