Last year, Orange unleashed the best budget Android phone on an unsuspecting market place in the form of the Orange San Francisco. It offered a high resolution screen, half decent processor and a new-ish version of Android for just £100 on PAYG. Now the company is back with another budget Android offering, the Stockholm, which continues Orange’s obsession with naming its phones after cities, but this phone comes with an even cheaper price tag of just £80 on PAYG. However, while the San Francisco was manufactured by ZTE, this model is a Huawei design, so the question is just how well does it stack up against its older sibling?

Like the Vodafone Smart, the Stockholm is quite dinky and one of the more pocket friendly Android handsets around at the moment. It stands just 104mm tall and is fairly narrow too at 56mm wide. It feels quite light, but unfortunately also relatively flimsy, especially compared to higher-end Android phones. The plastic battery cover has just a little bit too much flex for our liking and we’re not fond of the loose feel of the home button either. 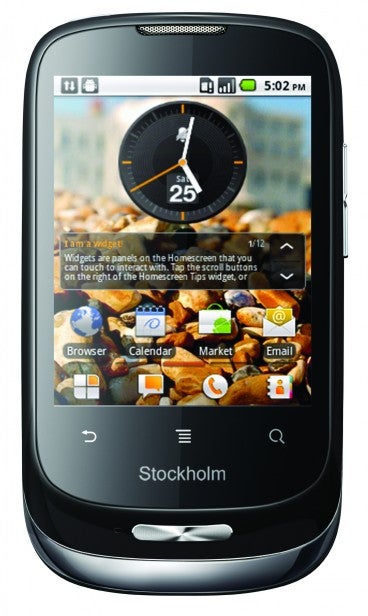 In fact, we don’t even like the placement of the front buttons. Beneath the screen there are three touch buttons for back, menu and search, with the home button mounted beneath them. Because the home button on most Android phones is posited directly beneath the screen we found ourselves often pressing the menu button instead of the home button when we wanted to exit the App Drawer, for example. The buttons also take up a huge amount of room on the front of the phone, as there’s over three centimetres between the bottom of the screen and the bottom of the handset, which makes the design look more than a tad unbalanced.

Elsewhere, though, the phone takes a pretty traditional approach. The standard 3.5mm headphone jack is positioned at the top of the handset, while the microUSB port is on the bottom. There’s a power button/lock switch at the top too, and a volume rocker switch on the right hand edge. However, as with a lot of today’s Android handsets, there’s sadly no dedicated camera button.

The Stockholm only has 256MB of memory built in, but it comes with a 2GB microSD card pre-installed in its card slot. Unfortunately, the card slot is placed beneath the battery so you can’t hot swap cards – an admittedly minor inconvenience. 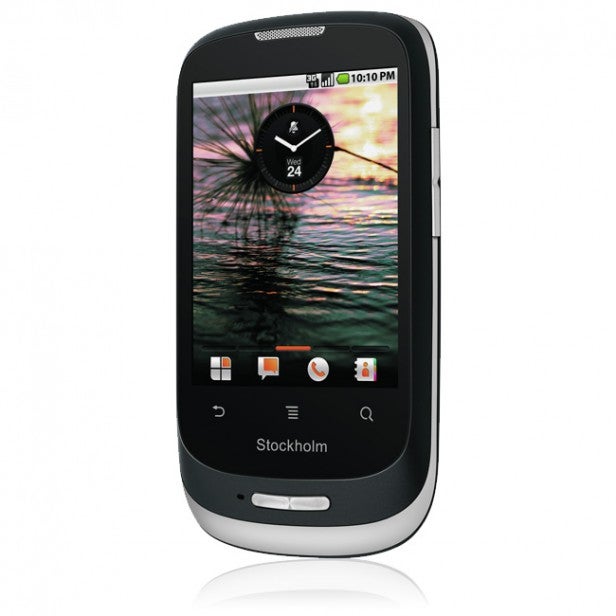 Rather than the Android V2.3 common on many phones, this phone comes with the older V2.2 version, which is equal parts surprising and disappointing as V2.3 has been out for quite some time now. The Stockholm also uses an older first generation Qualcomm chip that’s clocked at 528Mhz and has an ageing Adreno 200 graphics co-processor. The upshot of this is that the phone feels quite sluggish to use as it sometimes pauses for thought when loading apps, or moving through menus. The processor also hasn’t got the grunt to run Adobe Flash, so you can’t uses services such as the BBC iPlayer (without the app), which are available on higher end handsets.

As on its other own-branded Android phones, Orange has added it’s own skin over the top of Android and also installed a load of its apps too. These include both an App Store and a Navigation app, but seeing as these are both pretty poor you’re unlikely to be tempted away from the Android Market and Google Maps. Annoyingly, though, you can’t uninstall the Orange apps.

The small screen is another problem. At just 2.8inches it’s tiny, but the low resolution of 240×320 pixels is the real kicker. Text and icons look pixelated and blurry in the menus, but its negative effects are even more noticeable when you use the browser. Unless you’re zoomed in very close on a webpage, text is pretty much impossible to read and even when you are zoomed in close enough to actually read the text, there’s not very much of it visible at any one time. A knock on issue from the low resolution is there are several apps that will be unavailable to you in the Android Market. This is because it’s becoming increasingly common for developers to set a minimum requirement of a resolution of 320×480 pixels.

When it comes to the Stockholm’s camera, things couldn’t really be much more basic either. It’s got a 3.2megapixel sensor, but it lacks extras like autofocus and any kind of flash. The result is that the pictures it takes are pretty woeful. Unless you hold it very, very steady when you’re taking a photo, your pictures are likely to come out looking very blurry. In fact, even when you do manage to hold it steady enough, the images it takes have so little detail you’re likely to get similar results from the cameras you find on £30 PAYG handsets. In doors under low light conditions it’s unsurprisingly rubbish too, producing photos that are noisier than a drum kit falling down a stairwell. Certainly, if having a good camera on your phone is important to you, this is not the handset to buy.

The handset is not without its’ strengths though. Battery life from its 1200Mhz battery isn’t bad as you can expect to get around a day and a half’s worth of use out of it before it needs a recharge. Also, call quality was pretty good and there’s a neat application called signal boost that allows the phone to use your Wi-Fi network for making calls if the signal in your area is particularly weak. 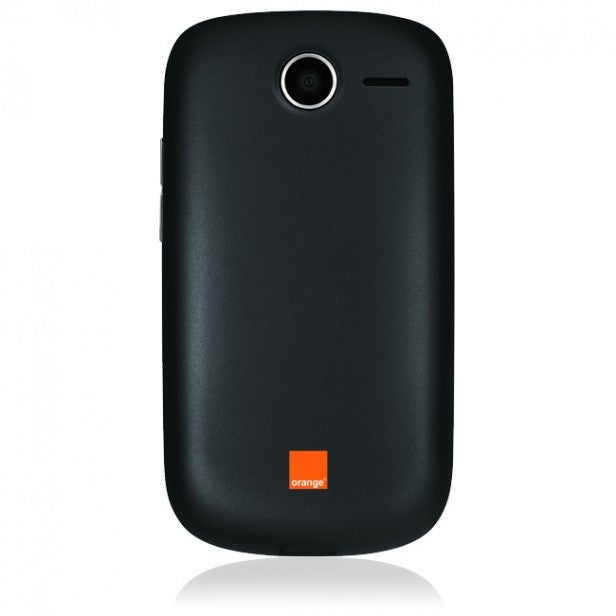 We also like the gesture app that lets you assign onscreen gestures to quickly launch applications or dial numbers. For example, you can set a ‘W’ gesture to quickly launch the web browser or draw a triangle shape to dial a number.

Verdict
The Orange Stockholm has it strengths, including its low price tag and pocket friendly size. However, the low resolution screen, sluggish processor and abundance of Orange bloatware means that it wouldn’t be our first choice if we were on the hunt for a budget smartphone. In fact, the San Francisco is still a much better phone than this one. 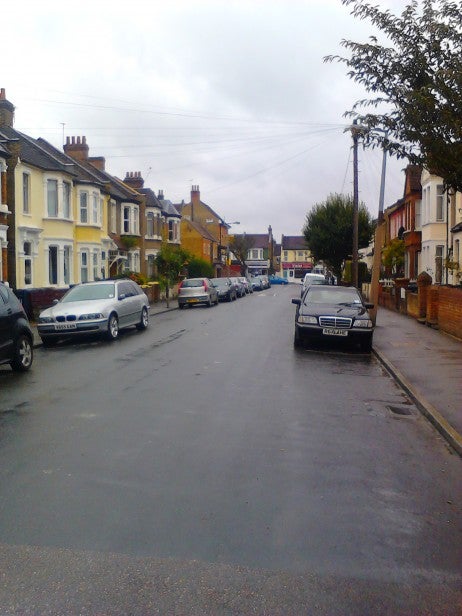 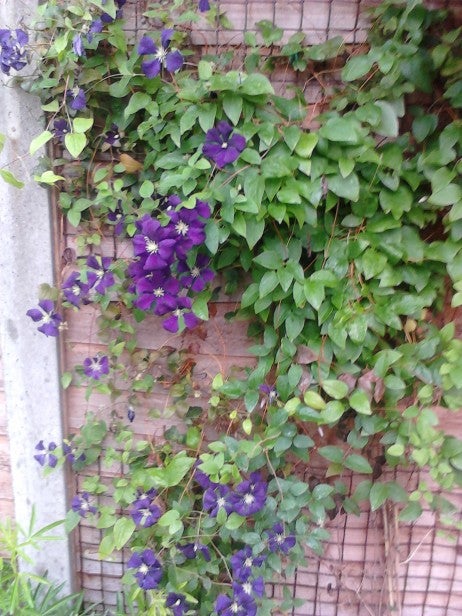 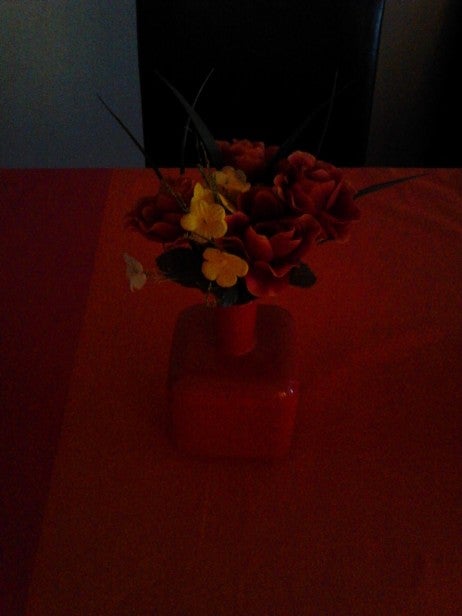