Just under a year ago I reviewed the original 3G Orange Mobile Office Card and was decidedly unimpressed. The problems were many with this 3G card, with sub standard hardware and poorly considered software adding up to a package that, quite simply wasn’t up to the job at hand. This situation was made worse for Orange by the fact that only a few weeks earlier I had reviewed the Vodafone Mobile Connect 3G data card, which had performed flawlessly.


I was therefore a little wary when Orange offered to send me the new Mobile Office Card, but I shouldn’t have worried because with this new card the future is bright with Orange! It comes as no surprise to me that the new Mobile Office Card is manufactured by Option. Option is the company that manufactured the original Vodafone Mobile Connect card, which pretty much kicked the original Orange card’s butt – the original Orange Mobile Office Card was manufactured by Merlin. I imagine that Vodafone had an exclusive contract with Option for a while, which is why Orange had to look elsewhere, but now it seems that the exclusive period has expired. Of course that’s only guess work on my part. 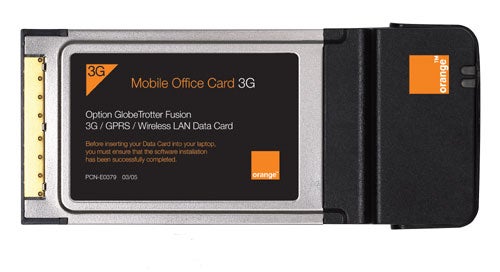 What I received from Orange looked very much like the pack that Vodafone sent me last year. There was a thick DVD size box, but inside the card itself was housed in a much smaller box for easy transport. I also received a booster aerial that’s pretty much identical to the one I got from Vodafone. One plus point for Orange is that that aerial can clip onto your notebook lid, whereas the Vodafone one attaches via stick-on Velcro patches – the Orange method makes it far easier to use the aerial with different laptops.


Where this new Orange card does differ from my Vodafone one is the inclusion of WiFi into the bundle. So, as well as 3G and GPRS connectivity, you’re also getting 802.11g WiFi thrown in. Of course if you bought your notebook in the last couple of years, the chances are that it will already have WiFi built-in, so this feature is somewhat limited. However, it’s worth remembering that the original Centrino standard was 802.11b, so there will be a large number of notebook users out there who will welcome an upgrade to 802.11g.

The software has also been updated significantly since I reviewed the last Mobile Office Card. The new interface is clean and simple to navigate and it’s now possible to send text messages while you’re connected to the Internet – a feat that was beyond the original hardware/software setup. Another major issue that I had with the original software was the fact that the signal strength indicator wasn’t real time – basically it showed you the signal strength at the time of connection and stayed that way. This was probably the most bizarre feature I’d ever seen on cellular device, but thankfully this problem has been resolved and the signal strength indicator in the new software is real time.


The software application runs in a small floating window. The central portion shows your connection type and your signal strength indicator, while the disconnect button is to the right of this. Below this are your usage indicators, showing you how long you’ve been connected and how much data you’ve transferred. At the bottom is the main row of buttons – the Internet button gets you online, the Text Messaging button opens up a window from which you can send SMS messages, the Internet Email button opens up your browser at the Orange web-mail page and the Office button allows you to configure remote connection to your office network. The Help and Settings buttons are pretty self explanatory.

Now, we’ve looked at a couple of Orange 3G products in the past and the biggest stumbling block has always been the actual network coverage. When Benny reviewed the Sanyo S750 handset he found it almost impossible to find 3G coverage, making the device close to useless, and when I reviewed the last Orange Mobile Office Card I had a similar experience. However, I have had no problems at all getting a 3G connection with this new card. I’ve used the card at home in West London, in Central London and up North in Bolton – in every location the card connected at full speed over 3G without ever dropping down to GPRS. Even in the TrustedReviews office which is a notoriously hostile environment for anything wireless the Mobile Office Card managed to lock onto a 3G signal, and although it sporadically dropped down to GPRS, it renegotiated a 3G connection whenever possible.


In use the Mobile Office Card feels very fast, just like a 3G data card should. Performance was at least on a par with my Vodafone card, a feat that the previous product had no chance of achieving. I had no problem browsing the web, using POP3 email and sending the odd SMS concurrently. Quite simply, the Mobile Office Card does exactly what it’s supposed to and it does it very well.

So, Orange has turned an “avoid at all costs” product into a first rate mobile data solution, but how much is it going to cost you? Surprisingly, it’s not going to cost you any more than the original – taking a medium usage tariff, you’re going to be paying £150 for the card and then £23.50 a month for up to 65MB of data, with additional data costing £1 per megabyte. Although that’s not bad value, the Vodafone Mobile Connect card is priced identically, except you get 75MB of data each month instead of 65MB. Of course you’re not getting integrated WiFi with the Vodafone card, but you have to weigh up how important that is to you – if you already have 802.11g integrated into your notebook then you don’t really need this feature. 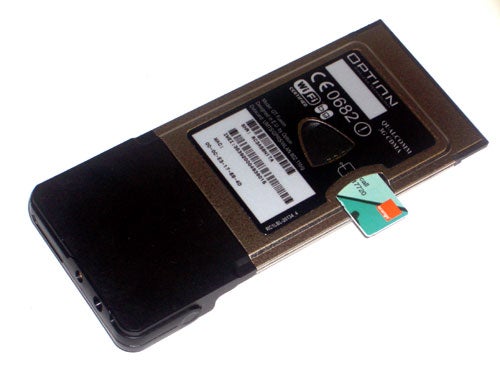 Ultimately, splitting hairs over an extra 10MB a month and integrated WiFi doesn’t seem important to me. What is important is that the pricing of 3G data cards hasn’t dropped since I reviewed the first one a year ago! I would have hoped that at least the initial hardware cost might have dropped by now, after all that’s what happens with mobile phones. That said, you either need a 3G data card or you don’t. For me it’s an invaluable tool that really helps me do my job. If you’re in a similar position to me, the initial and rolling costs will be money well spent.


The original Mobile Office Card was a disappointment in more ways than I can list, but Orange has atoned for its earlier sins by producing the new version. This latest 3G data card is a pleasure to use, and if Orange would just pull their finger out and match Vodafone’s tariffs it would be the solution of choice. As it stands, Orange has a product that performs equally as well as Vodafone’s, and if you only have 802.11b in your notebook you’ll even get a WiFi performance boost.