The UMPC concept has been around for some time now, but in my opinion no company has yet produced a better-designed, more desirable device than OQO. When Riyad saw the company’s first miniature PC at CES way back in 2005 he badly wanted to lay his hands on one.


It was about as small as you could imagine a PC being, squeezing in an amazing amount of functionality, but it was the design and engineering quality that made the OQO Model 01 so desirable. The company’s latest version – the Model 02 – exudes the same technological pheromones. 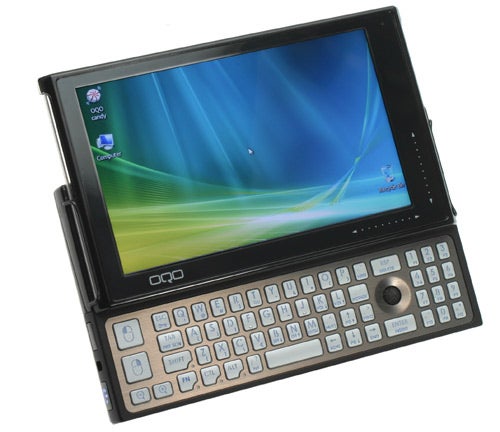 It is just as small as the Model 01: at 142 x 84 x 25mm it’s about the size of a small but thick ring-bound notebook. It still has that solid, military hardware feel to it. The screen still slides up in one smooth, fluid motion to reveal a QWERTY keyboard underneath. And the chassis is constructed of the same stiff magnesium alloy. Compared to the Sony UX1XN, a comparable Windows Vista pocket PC I looked at recently, this is a mile ahead in terms of engineering quality.


But the Model 02 hasn’t stood still, and this latest version represents a pretty big facelift. The most obvious change is the colour scheme, which has gone from gunmetal grey and silver to a combination of matt and gloss black finishes, with the odd flash of brushed aluminium here and there. I liked the old colour scheme because it was different and still managed to look really smart. But though the Model 02 now merges into the crowd a bit more – everyone is doing gloss black these days – it still manages to pull the look off with great panache. 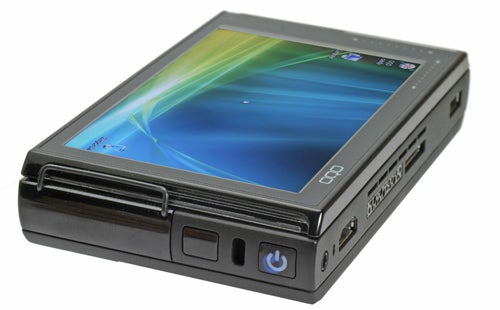 The lines of the diminutive Model 02 have been softened a little this time around, with curved sides where you grip the device. The Model 01 and 01+ were quite blocky and could be uncomfortable for long periods of time, but the Model 02 is much easier on the palms.


Flick up the screen with your thumbs and you’ll see that OQO has gone to town on the keyboard as well. With the Model 01 and 01+ we had a usable but occasionally fiddly keyboard. The unusual circular keys were quite difficult to hit accurately and, though better than most smartphone keyboards, this made text entry relatively slow. However, the development guys at OQO have clearly been paying attention in keyboard classes, because the one on the Model 02 is a vast improvement.


The keys are now square-ish, so it’s much easier to hit the keys in the first place, and they have more feedback to them too, so it’s much easier to tell when you’ve actually hit a key successfully. More importantly, you can actually thumb-type quite quickly on it. It’s never going to match a notebook keyboard for speed, but for writing short documents and emails it’s perfect. Again, compared to the Sony UX1XN this is streets ahead, and much more convenient to enter text and web addresses than a plain tablet-based UMPC like the Ubiquio 701.

The keys are backlit too and in another nice engineering touch the backlight is controlled by a sensor that switches it on and off depending on the ambient light conditions. This makes the Model 02 a dream to use in dimly lit environments. On a plane when everyone else is asleep and your insomnia kicks in, you’ll now be able to type away without having to turn on your light, or squint at the keyboard every time you reach for the @ key.


Perhaps the only flaw here is that the size of the device means you have to stretch a bit to reach the keys in the middle of the keyboard, but this small niggle is offset by the fact that you have a dedicated number pad for number entry, which is much more convenient than having letter keys double up as number keys. 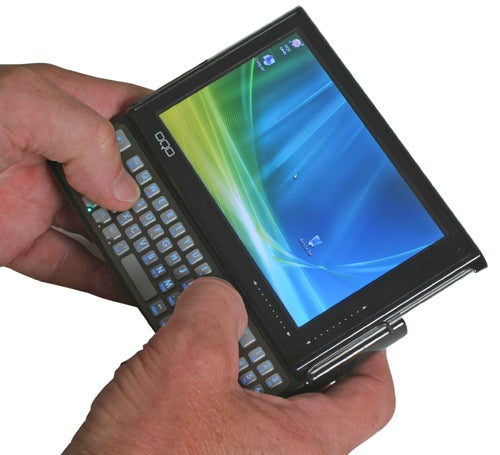 Mousing duties are taken care of by a touch stick, which works as well as the keyboard does. It’s reliable and accurate and the left/right buttons located on the right hand side of the keyboard can be clicked without contorting your hand. But in a slightly regressive step, there’s no touch screen on the Model 02. If you prefer the pen tablet approach then the screen will work with OQO’s digital pen, but it’s an optional extra and you can’t simply use your finger in its stead.


What you do get, however, are a couple of touch-sensitive scroll bars, situated at the bottom right hand corner of the screen, which can be used to zip up, down and across web pages and documents with ease. It’s a simple idea but one that’s intuitive and once again bears the mark of quality engineering.


These swish navigational aids are supplemented by a pair of dedicated zoom keys, which are located just below the left and right mouse buttons, which can be used to quickly zoom out to 1,000 x 600 or 1,200 x 720 – essential if you come across a dialogue box which can’t be resized when OK and Cancel buttons disappear off the bottom of the 5in, 800 x 480 screen. 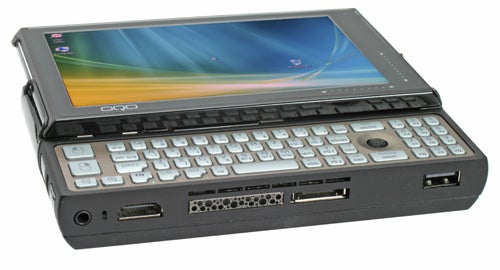 Under the hood, as you’d expect from a machine that’s now being asked to power Windows Vista (Ultimate in the Model 02 Expansys supplied to us for review), there’s much more power on offer than before. The CPU is a Via Esther 1.5GHz ultra low voltage model, the hard disk capacity has been upped from 30GB to a 60GB 1.8in Hitachi Travelstar drive with active drop protection, and RAM is now at 1GB, though we’d expect the latter as a minimum specification with any machine running Microsoft’s memory-hungry OS – even one as tiny as this.


It all results in perfectly acceptable levels of performance when running office applications and the whole system seems to run much quicker and cooler than the old model. But there is a caveat: the graphics chipset – VIA’s integrated S3G UniChrome graphics with shared memory – isn’t particularly powerful. In fact it isn’t even capable of displaying Vista’s Aero graphics, so no fancy transparent glass windows and it definitely won’t put up with any 3D gaming. This is one area where the Sony UX1XN beats the Model 02, with its Intel 1.33GHz U1500 processor and Intel GMA 950 graphics chipset able to display all of Vista’s eye candy.

One thing it will happily cope with is video playback, and to this end, OQO have equipped the Model 02 with an HDMI port, which is sited on the device’s bottom edge next to the USB 2.0 and docking ports. And though you might not think it has the credentials to be a media centre PC in its own right, especially with the limited 60GB hard disk, you could turn it into one. Buy the optional docking port, hook up an external hard disk and DVB-T tuner to that, and you could have the world’s smallest media centre PC on your hands.

Elsewhere, however, the Model 02’s connectivity options aren’t quite up to scratch – and this is another area where the Sony UX1XN pulls ahead. The Model 02 has no card reader, just one USB 2.0 slot and a single 3.5mm audio in/out socket around its edges in addition to a port for docking. The long, knobbly docking cable of previous versions has been replaced with a stubby docking dongle and this adds a D-SUB output for powering an external monitor (up to resolutions of 1,600 x 1,200) plus an RJ-45 port for connection to the Model 2’s Ethernet adaptor. It lacks a FireWire input, though.


The Model 02’s wireless capabilities haven’t been improved either. There’s both Bluetooth and Wi-Fi on offer here, but it’s only 802.11a/b/g capable and neither is there an HSDPA adaptor for fast wireless communications on the move. 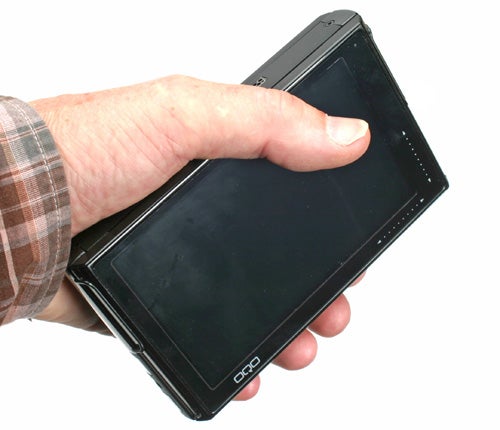 The Model 02’s battery life is also a concern. While Intel-based ultra-portables are producing battery life stats of five hours and more from a single charge these days, the Model 02 has stood still. With the Model 02’s standard lithium-ion polymer unit you’ll be stuck at just three hours – and that’s just editing documents, browsing websites and the like. Move to watching video or listening to music, and that figure will drop dramatically. The optional double-sized battery allows you to improve on things, but it comes at the expense of larger size and weight.


The OQO Model 02 clearly isn’t for everyone. But if you need more power than a smartphone, want a built-in keyboard and the power of a Windows PC in your pocket, then it’s a straight fight between the OQO and Sony’s UX1XN.


The latter is the more powerful and fully featured device as a quick comparison will confirm. But what a spec sheet or a price comparison can’t tell you is how a device feels to use and, critically, in this department there’s simply no contest. OQO’s Model 02 has taken the desirability of the original model up a notch and has made it much more usable. That, coupled with a cheaper price makes it the better device in my book.