Today’s AV world is much more fluid than it used to be. The days when a product stays the same from the day it appears to the day it’s withdrawn are increasingly things of the past.

This is especially true in the projection world, where we’re increasingly hearing tales of quite radical changes being made to some projector models in the course of their shelf lives. Which brings us to the Optoma ThemeScene HD83.

It’s fair to say we weren’t exactly blown away with this 3D projector when we first saw it, criticising it for considerable problems resolving dark scenes. Especially with 3D. Fair play to Optoma, though; seemingly stung by our comments, over the past few months it’s been busy tinkering away with the HD83, introducing firmware improvements it believes are so significant that it contacted us a couple of weeks ago to see if we might consider revisiting a machine it clearly now feels proud of. 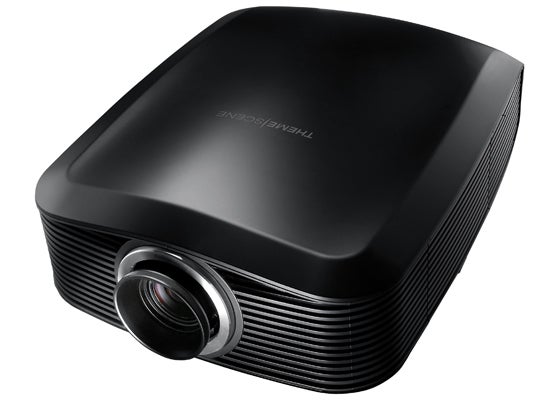 Naturally we said we would. Especially when we learned that Optoma also believes that the original review sample we had for test may have been suffering from a faulty lamp.

Keeping up with the Optomas
It wouldn’t be fair, after all, to leave a review on record that might now be out of date and not representative of the product currently available to buy. Also, we’re all in favour of supporting any brand that responds to criticism in such a positive fashion as Optoma has – even if that means doing a completely new review of the product in question.

Not surprisingly, though, the HD83 hasn’t changed at all on the outside. It’s still the same serious-looking elongated unit with a matt black finish and gently curved top edge. It’s hardly a supermodel, but its design and finish do help it become ‘invisible’ in a dark room – and that’s all that really matters on a projector that clearly hopes to appeal to fairly serious film enthusiasts despite its relative affordability.

Connections are the same as before too, with highlights of two V1.4 HDMIs, two 12V triggers, and a round socket where you have to jack in the provided external 3D transmitter. Some people might feel aggrieved that the Optoma ThemeScene HD83’s transmitter isn’t built into the projector’s body, we guess, but it doesn’t really bother us, to be honest. Especially as the transmitter itself is unfeasibly tiny.

The main reason it’s so small is that it uses RF transmission rather than Infra-red. This approach was ahead of its time when we first reviewed the HD83 back in November, though now most other 3D brands are starting to follow the RF approach due to the fact that it consistently delivers much more stable transmissions.

3D glasses included
You also get two pairs of 3D glasses with the projector, which is actually a pretty good deal when you consider that the whole package only costs £2,400.

Setting up the HD83 reveals that it still uses rather vertical and horizontal image shift wheels rather unhelpfully positioned under its front edge, and that there still isn’t as much range in the vertical shift arrangement as we would like. This could cause problems for people wanting to mount the projector behind them on a shelf or dedicated projector stand.

At least the Optoma ThemeScene HD83’s focus ring is slick and easy to use, though, and the onscreen menus, while not glamorous, are pretty easy to find your way round.

The only downside to them is that they do contain a few important but rather inscrutably-labelled features (such as Image AI), meaning that we’d strongly recommend that anyone buying this projector takes the time to read its instructions manual quite methodically.

The changes that have been brought to the HD83 all reside inside its presets and firmware. And as detailed in Optoma’s own words, they stack up like this: ‘The offset, gamma and colour balance have been tweaked to provide a brighter and more natural colour balance while playing 1080p 24-frame 3D content. The NATIVE colour space setting also now allows for a more accurate representation of the production companies’ enhancements to Blu-ray material in 3D, allowing for a brighter, more saturated 3D image with excellent contrast and black levels.’

While the apparent extent of these improvements certainly seems to support the findings of our initial review of the HD83, they also, of course, raise big hopes for the 3D performance of the current model. So without further ado, let’s don a pair of Optoma’s chunky but effective 3D glasses, and see if all the promised changes – and potentially better-performing lamp – really do make a difference.

Substantial improvements ahoy
Actually, they do. In fact, they make a very substantial difference. Feeding the ‘reborn’ HD83 the same 3D material that caused the original version so much trouble, the results are night and day. Where previously dark backgrounds were so dark they were basically just black holes, now you can make out plenty of shadow details in all but the very darkest of corners. Which is pretty handy, really, when you consider how important background information is to creating a sense of 3D depth.

Even better, unlike with the previous model this vastly superior contrast performance doesn’t require any OTT upping of the projector’s brightness to get the shadow detail information to appear. Which in turn means that blacks can still look decently black rather than grey, and that colours can look much more neutral, natural, and subtly nuanced than they ever did with the previous HD83.

Perhaps because of the sudden increase in visible shadow detail and colour subtleties, it also seemed to us that the Optoma ThemeScene HD83’s 3D pictures looked sharper and more detailed this time round.

All these new-found 3D ‘skills’ join another considerable 3D strength noted with the original HD83: the almost complete absence of crosstalk. DLP technology’s advantage when it comes to response times usually serves 3D well in this respect, and the HD83 is no exception.

All in all, from being one of the projection world’s biggest 3D disappointments, the HD83 has transformed itself into being one of the most watchable 3D performers around – no mean feat when you consider the affordable price bracket it sits in. Maybe that lamp in our original sample really wasn’t working properly.

Shifting our attention to 2D, hopes are now high that Optoma’s changes will deliver lots of good here too. And so they do – though not quite as all-round effectively as they did with 3D.

Pictures certainly look brighter and more contrast-rich, which in turn leads to colours looking more nuanced and more natural. There also seems to be a slightly crisper look to HD images as a result, most likely, of us being able to use more neutral image settings than we needed to in order to get the previous Optoma ThemeScene HD83’s 2D pictures looking in any way balanced.

With the latest HD83 able to produce good brightness levels while working less hard than the previous version, it’s also easier to be very impressed by how little noise its pictures display. Particularly gratifying is the almost complete absence of DLP’s dreaded rainbow effect – no mean feat on a single-chip DLP projector that costs just £2,400 and pumps out 1600ANSI Lumens of maximum brightness. 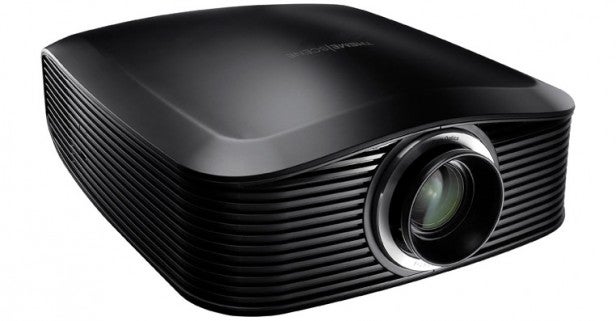 Thanks to all the strengths just described, bright scenes look nothing short of superb on the latest HD83.

There does remain an issue with the HD83’s 2D pictures, though: their black level response. Watching very dark scenes reveals a distinct grey wash over parts of the picture that should look black. This leads to a few dark colours looking a touch off key too, as well as hiding shadow details so that the darkest corners can look rather hollow.

Another Gear
Trying the simple Gears of War 3 Gamma test (it’s in the game’s video options menu) that we stuck into the original HD83 we tested, we found that while the new HD83 is certainly much better than the previous one, it still struggled more than we would have liked to bring out the left most ‘cog’ on the five-cog scale. Basically we had to turn the game’s brightness almost up to its maximum level again. This is much higher than we’ve had to go with any other projector we’ve tested in recent times, and definitely suggests that the HD83 has had its brightness/contrast balance tuned with 3D in mind more than 2D. 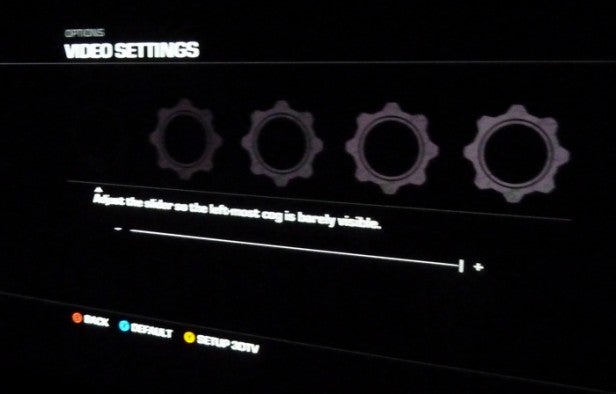 The final thing we should talk about with the new HD83 is its running noise. Happily, with its lamp in standard mode it’s really not distracting at all, even if you opt to use its dynamic iris system. And actually volume levels don’t by any means go through the roof when the lamp is driven harder to support 3D viewing.

Verdict
It’s difficult to be sure how much the improvements we’ve noticed on the latest ThemeScene HD83 projector we’ve received are down to Optoma’s firmware tinkering and how much they’re down to the previous sample possibly not having a fully functioning lamp.

But whatever the main cause of the differences, we’re very pleased indeed that Optoma persuaded us to look again at its mid-range 3D model. For while it’s still not quite good enough with dark scenes in 2D mode to earn an unbridled recommendation, it’s certainly a vast improvement on what we saw before. So much so, in fact, that this time round it’s worthy of a qualified Trusted Reviews Recommended badge.