A few weeks back we checked out an intriguing new concept aimed at the gaming community from projector maker Optoma. The GameTime GT-3000 package comprised of a DLP projector, a separate, colour-matched 2.1 speaker system, and a specially designed carry bag to lug everything about in – all for the frankly amazing price of £349.


However, while the GT-3000 was sort of OK, it ultimately failed to win TrustedReviews’ heart on account of its lack of HD support. After all, while the Nintendo Wii might be alright for Christmas parties, the vast majority of our gaming time is spent in the HD company of a PS3 or Xbox 360. Sorry Wii fans, but that’s just the way it is!


So it is with considerably more excitement that we take delivery of the GT-3000’s bigger brother, the GT-7000. For despite costing just £150 more than the GT-3000, the GT-7000 introduces an HD Ready native resolution and HDMI input to the party, instantly making it much more likely to tickle our game-playing fancy.


Actually, its much-improved HD credentials aren’t the only improvement the GT-7000 brings. For it also claims a contrast ratio of 4,000:1 – double the figure claimed for the GT-3000, raising real hopes that the GT-7000 will tackle the slightly underwhelming black levels witnessed with the GT-3000. 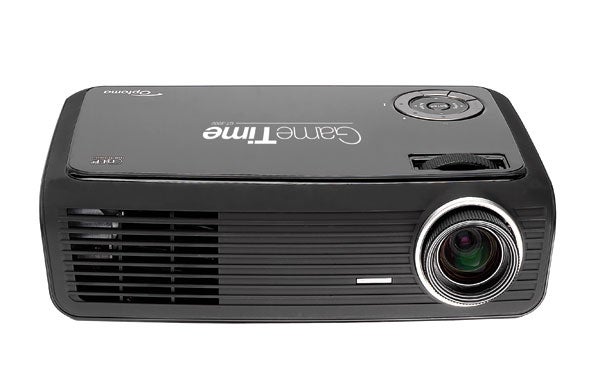 My hopes that this will be the case grow with the discovery that the GT-7000’s brightness is rated at 1600 lumens versus the GT-3000’s 2300 lumens. In my experience, while you can never fully trust manufacturer’s quoted specifications, the GT-7000’s contrast-favouring contrast/brightness balance is far more likely to produce really likeable results than the brightness bias of the GT-3000.


To my eyes the GT-7000 betters its cheaper sibling aesthetically, too. It’s basically the same remarkably small, slightly business-like shape as the GT-3000, but it sports a piano black finish that’s much classier and easier to keep clean than the ‘ice white’ of the GT-3000.


The speakers with the GT-7000 are, so far as we can tell, identical to those found with the GT-3000, other than they’re black, not white. They’re quite attractively designed, looking like a classic iPod speaker accessory. And their design is quite clever too, thanks to the way they ‘flat pack’ for transporting around but sport a fold-down subwoofer that allows the stereo speakers to stand up when placed on a table.


As we’ve already noted, the GT-7000’s connections include an HDMI input. But gamers might also appreciate a component video port and a D-SUB PC input. Plus there’s an S-Video port, and even, surprisingly, a 12V trigger output that could be used for automatically firing up a motorised screen. We’ve seen many projectors costing thousands of pounds fail to provide one of these handy little jacks, so kudos to Optoma for being so thoughtful.

As you’d hope of what’s designed to be very much a ‘casual’ machine aimed at casual users, the GT-7000 is a doddle to set up. Simple zoom and focus rings sort out image size and sharpness, while there are menu options for shifting the image a respectable distance sideways or vertically, and a vertical keystone adjustment for straightening the edges of the picture if you’ve got the projector sat above or below the centre of your screen.


If you want to go more in-depth with your set up than this, though, you can. Other options in the menus include overscan adjustment, EdgeMask adjustment, a number of themed picture presets, various Degamma settings (which really are well worth experimenting with), and even the facility to tweak the gain and bias of the picture’s red, green and blue elements.


However, to be honest the first thing I did as I set about actually testing the GT-7000 was turn BrilliantColor right down to its two or three level (out of 10). For if you leave it any higher than that it tends to make pictures look distractingly grainy and ‘forced’. Also, I personally wouldn’t recommend that you use the TruVivid setting at all, for while it can enhance the vibrancy of richly coloured objects, it can make skin tones look distinctly odd. Not for the first time I’m left feeling that features like TruVivid and BrilliantColor should be left for really high-end projectors better-equipped to get the best from them. 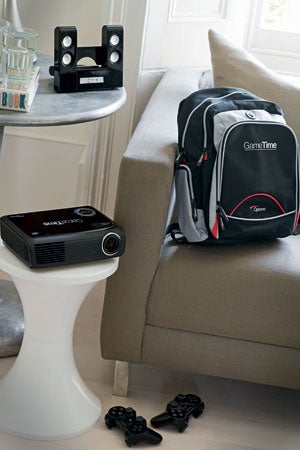 Another provocative setting is the Gamma preset control. For fiddling around with this can have a huge impact on the general flavour of the final picture being shown, and as a result it’s a feature you would be well-advised to revisit regularly, depending on whether you’re watching a film or TV show or, of course, playing a game.


Provided you take these reasonably basic precautions, though, the GT-7000 can actually produce some startlingly good pictures for such a crazily cheap projector.


Black levels, in particular, are a revelation, making the endlessly dark corners of Dead Space on the Xbox 360 look spine-chillingly black and believable, and helping to create a good sense of scale. In other words, the GT-7000’s black levels create a sense of you ‘being there’ far more successfully any other sub-£800 projector I’ve ever seen – including the GT-3000. Clearly this is an extremely important strength for a projector focussed on gamers.


I was also pleased with the sharpness of the GT-7000’s pictures. Extremely textured graphics like those of Gears of War 2 genuinely look HD, with decent sharpness, solid detailing, and less signs of scaling ‘softness’ than we found with the non-HD Ready GT-3000. The GT-7000’s extra resolution also helps it produce colour blends with more subtlety, so that there’s less of the striping effect witnessed with the GT-3000.


Although not as bright on paper as the GT-3000, for me the GT-7000’s pictures are actually considerably more dynamic thanks to the vastly improved black level response. So much so that crucially the GT-7000 proves to be a perfectly capable projector for Blu-ray movies as well as games, making its GameTime name actually feel unnecessarily limiting.

Yet more good news finds the GT-7000’s colours looking both more richly saturated and much more naturally toned than those of the GT-3000. I need to be realistic about this and say that we’re clearly not talking about colour subtlety or accuracy to rival a normal- or high-priced projector, here. But tones are generally good enough to convince rather than distract, and in fact it’s this respectable colour palette together with the really very decent black level response that ultimately make the GT-7000 so much better than any other projector we can think of for anything like the same money.


As always with a budget DLP projector, the GT-7000 does suffer with the technology’s rainbow effect, where stripes of red, green and blue flit around in your peripheral vision or appear over very bright image elements. This can be slightly annoying during gaming, which tends to use more contrasty images than your average film or TV show. But actually the problem is far less overt than on the GT-3000, or indeed numerous more expensive DLP projectors we can think of. What’s more, the GT-7000 also keeps an impressive lid on those twin DLP issues of dot crawl in dark areas, and fizzing noise over moving skin tones. 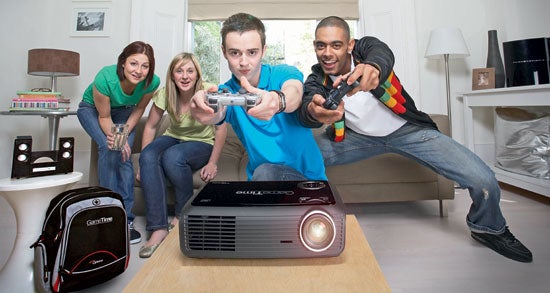 I also wasn’t as perturbed by the GT-7000’s standard definition performance as I’d expected to be. Sure, the lack of any truly high-level video processing circuitry means standard definition pictures look rather soft, and there’s little if any effort to reduce the MPEG blocking noise found in many digital broadcasts. But actually the slightly soft flavour of the GT-7000’s standard def picture seems to reduce grain and mosquito noise, and provided you take care to adjust the video and gamma presets to suit whatever source type you’re watching, there’s also less trouble from dodgy colour tones than I’d have anticipated on such a dirt-cheap projector.


One concern I do have, though, is that the GT-7000’s surprisingly high performance almost seems beyond the physical limits of the projector’s chassis. In other words, even though its cooling fans appear to be working extremely hard judging by the occasionally distracting amount of noise they pump out, the GT-7000 projector runs intensely hot. While this may be handy for keeping the house warm if you run out of heating oil over the New Year, it’s a little concerning so far as the projector’s longevity is concerned. Still, the GT-7000 comes with a five-year colour warranty from Optoma, so maybe I’m worrying too much.


Turning to the sound produced by the GT-7000’s included speakers, I’m afraid the situation is just as uninspiring as it was with the GT-3000. For while the little speakers can go louder than you’d think from looking at them, and can cope OK with relatively undemanding audio like the ‘cutesy’ soundtrack of Viva Pinata 2, they rather fall apart with the explosive histrionics of something like Gears of War 2. The mid-range distorts and even disappears under duress, all too often taking vocals with it.


Although the GT-7000’s audio system is a let down, the projector more than makes up for it by producing startlingly good pictures for such an astonishingly affordable unit. In fact, it’s good enough to perform credibly with HD movies as well as games, giving it an all-round appeal that makes its £480 price tag look so cheap it’s almost obscene. But in a nice way.