For the past two Christmases, Onkyo has been the UK’s best-selling AV receiver manufacturer, and as another Yuletide approaches the Japanese brand is hoping this year’s line-up will once again bring them plenty of festive cheer.


It’s not hard to see why Onkyo kit is selling like hot cakes. Lauded models like the TX-SR607 and TX-NR906 blend ultra-generous, cutting-edge feature lists with scintillating audio performance at prices that mere mortals can afford – and if that’s not enough to secure a major chunk of the market, then we don’t know what is.

So step forward Onkyo’s latest stocking filler, the TX-NR807. If you thought the TX-SR607 was generously equipped, you ain’t seen nothing yet. Just a glance at the long list of logos on the box suggests we’re in for yet another trip through the A-to-Z of audio innovations; and in terms of power its seven x 180W rating is muscular enough to wake up a whole county, not just your next-door neighbours.


From an aesthetic angle, the TX-NR807 doesn’t rewrite the rulebook but the sloping lines and brushed finish of our black model are undeniably fashionable (the alternative silver finish is almost as tasty). The arrangement on the double-layer aluminium fascia differs from the SR607, in that most of the buttons are concealed beneath a large flap, keeping everything nice and clean.


Beneath the flap is a wide assortment of buttons, which actually gets a little confusing when making up-close adjustments – you’re better off with the remote, which is primed for maximum comfort and minimum confusion. It boasts intuitive button placement and clear labelling for every single key, and you can programme ‘Easy Macros’ that carry out a sequence of commands at the touch of a button. Some of the buttons at the top even light up when pressed, making in-the-dark operation a cinch.

The unit’s operational cogs are further greased by a series of easy-to-follow onscreen menus, output in colour over the HDMI socket. These aren’t available through the S-video, component or composite video outputs but thankfully the front panel display is equally easy to use.


Front-panel connections include a set of auxiliary inputs – composite video, analogue stereo and optical digital – but surprisingly it lacks the front-mounted HDMI input found on the TX-SR607 and TX-SR707. All of unit’s six HDMI v1.3 inputs are found on the back, alongside a single output to pass signals onto other equipment.

There are also eleven pairs of speaker binding posts, far more than your average AV receiver. That’s because the TX-NR807 offers Dolby Pro Logic IIz and Audyssey Dynamic Surround Expansion (DSX) – the former allows you to add ‘front height’ channels where non-directional ambient effects are directed to the front of the soundstage, while the latter offers front wide or front height channels. In both cases you have to sacrifice the surround back channels, but the results are a fuller and more immersive soundstage, and with the right material the results can be very effective.


The surround back terminals can also be used to bi-amp speakers if needed, plus you can power stereo speakers in Zones 2 and 3, making this the ideal receiver for multi-room setups. Elsewhere the connections are extensive, featuring more than enough digital and analogue audio inputs/outputs to satisfy the busiest of setups, as well as loads of component, S-video and composite video sockets for your video switching needs. There’s even an Ethernet port (more on which later), two subwoofer pre-outs (making it a 7.2-channel receiver) and a universal port that lets you connect peripherals like a DAB+ tuner or Onkyo’s ND-S1 iPod/iPhone dock. With the latter, the TX-NR807 supports its onscreen menu feature, which makes it easy to find the video and audio files you’re looking for.

The TX-NR807 has been rigorously scrutinised by the good folk at THX, who have deemed it worthy of Select2 Plus certification. Not only does it meet the company’s exacting home cinema standards (including the ability to fill rooms up to 56m3) but it also features a bunch of THX’s own listening modes, such as Cinema, Music and Games.


Chuck any format at the Onkyo and chances are it’ll play it. The full complement of Dolby and DTS formats are supported (Dolby True HD and DTS Master Audio HD being the important ones for Blu-ray owners) plus you get more listening modes than you can shake a stick at – DTS Surround Sensation, Theatre Dimensional, DTS Neo:6, Dolby Pro Logic II/IIx and eleven Onkyo DSP modes.


Among these are four new modes for gamers that are tailored towards different genres – RPG, Action, Sports and Rock (for music games like Guitar Hero). The processing grunt needed to deliver this audio wizardry is supplied by Texas Instruments’ Aureus DA830/DA788 DSP chips.


But if you prefer a more organic approach for your sound then no problem – the Direct and Pure Audio modes strips away all the processing, and the use of eight-channel Burr Brown 192kHz/24-bit DACs mean your audio signals are in safe hands. There’s a mode to satisfy every conceivable listening preference, making this the most versatile Onkyo receiver yet.


And the features don’t stop there. It’s also DLNA 1.5 compatible, which means you can plug that Ethernet port on the back into your home network and stream audio files from remote PCs, as well as access internet radio stations and retrieve firmware updates.


One final feature to mention (although there are lots more we haven’t touched upon) is 1080p upscaling courtesy of the onboard Faroudja DCDi chip, which comes with a wide range of picture adjustments (such as edge enhancement and noise reduction). There really is nothing this receiver can’t do, beside wash the dishes or bake a cake – although it would probably have a damn good try.

Like previous Onkyo receivers, setup is simplified by the Audyssey MultEQ automatic calibration feature. This is a complete godsend if you’re new to this home cinema lark, as it saves you the hassle of setting all the channel levels and distances yourself. Using a setup mic that plugs into the front panel and emitting a series of test tones, it checks your system and sets the optimum levels, leaving no stone unturned. Once the levels have been set, Audyssey’s Dynamic EQ and Dynamic Volume keep sound it at its best no matter the volume, and you really can hear the difference they make during low-level listening. 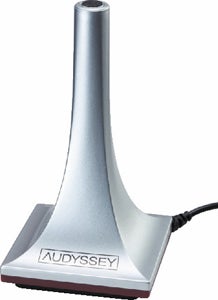 We haven’t heard a bad Onkyo receiver yet, and the TX-NR807 certainly doesn’t let the side down. Like its stable mates past and present, this unit’s greatest asset is its sheer power and wallpaper-stripping ferocity. Slip a disc like Transformers in the tray, turn it up loud and the action set pieces will almost rip your head off. Gunshots, explosions, clashing metal, thumping, robotic footsteps – the NR807 blasts them out with exhilarating aggression.


Helping the Onkyo achieve this level of potency is some formidable bass work. Bottom-end effects are taut, fulsome and far from boomy. But it’s not all crash, bang, wallop – it conducts the soundstage with the sort of poise and control that Simon Rattle would be proud of, particularly when it comes to rear channel steering and effect placement. As a result the Onkyo achieves a sense of space and scale that is breathtaking to behold.


Dialogue is clearly articulated too, whether it’s the mellifluous tones of Optimus Prime or Megan Fox’s softer feminine drawl. Even during busy action scenes the clear channel separation gives the actors the space to communicate despite the cacophony going on around them.


Any flaws are minor. It doesn’t quite coax out the very finest scraps of background detail during quiet passages as well as, say, the TX-NR906. And invigorating though it is, you do occasionally come away from a session with the NR807 feeling a bit frazzled from all that aggression and in-your-face intensity. But if big, brutal cinema sonics are your bag, the Onkyo will be your friend for life.

And anyway, if you want to reveal the Onkyo’s softer side, simply switch to stereo (Pure Audio mode of course) and play a gentle tune like Blue In Green by Miles Davis, the sonic equivalent a hot bath. Warm, appropriately languid but relayed with plenty of detail, you simply don’t expect such a beast to suddenly slip on the kid gloves and deliver a silky musical performance like this.


There’s just a hint of asperity in Miles’ high notes, which is the Onkyo’s harder side poking through, but after going twelve rounds with it in the movie ring, it’s pleasing to see it doing the sensitive stuff too – a bit like Joe Calzaghe going on Strictly Come Dancing, but with better timing.


On this evidence, it’ll be criminal if Onkyo doesn’t get another Christmas number one. Like the TX-SR607 before it, the NR807 delivers phenomenal sound quality with poise and power in spades, making for an unforgettable movie-viewing experience. Yes, its relentless, unsubtle ear bashing won’t suit all tastes, but those who like their movies loud will go nuts for it.


It’s also easy to use, simple to install and, as AV receivers go, it looks great. But what’s most impressive is the ridiculous amount of features you get for a fairly reasonable outlay, which puts it firmly in ‘must-buy’ territory.