Last month I looked at the Teufel Concept E400 speaker set, which offered a complete surround sound solution on a budget. Today I’m looking at a similar system from Onkyo. The Onkyo HTX-22HD is, in fact a 2.1-channel system, but the optional SKS11 pack brings it up to full 5.1-channel status, and both parts of the puzzle still come in at under £400.


The big difference between this Onkyo system and the Teufel one, is that there is no need for a separate surround sound processor this time around. Onkyo has built a pretty feature rich processor into the active subwoofer. In fact the connection options and codec support offered by the Onkyo HTX22HD are more impressive than those seen on the Teufel Decoder Station 5. 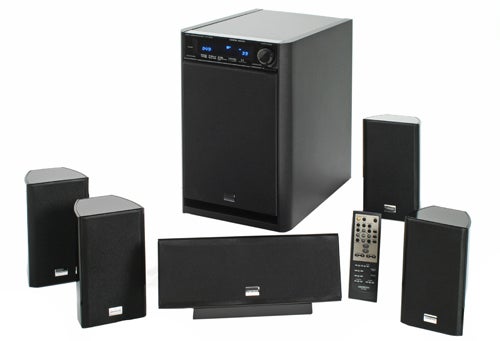 The big news is that the HTX-22HD is equipped to handle the latest lossless surround sound formats found on Blu-ray discs. Unsurprisingly that means you’ll find some HDMI 1.3 ports at the rear of the subwoofer – three to be exact, two inputs and one output. You also get two optical digital inputs and one coaxial, allowing you to connect up to five digital sources. Even if your equipment has HDMI connectivity you still may need the optical inputs, since devices like the Sky HD box and Xbox 360 don’t output multi-channel audio over HDMI. You also get two sets of stereo inputs, in case you want to hook up something without a digital audio output.


So, the HTX-22HD has the right connections to accommodate pretty much any surround sound codec, but how does its support list look? The answer to that question is simple – very good indeed. The highlights are undoubtedly Dolby TrueHD and DTS HD Master Audio, meaning that you’ll be able to take advantage of the very best sound mixes on Blu-ray discs. As well as the lossless formats you also get Dolby Digital Plus, standard Dolby Digital, DTS, DTS Surround Sensation, Dolby Pro Logic II and a plethora of other DSP and virtual surround modes. 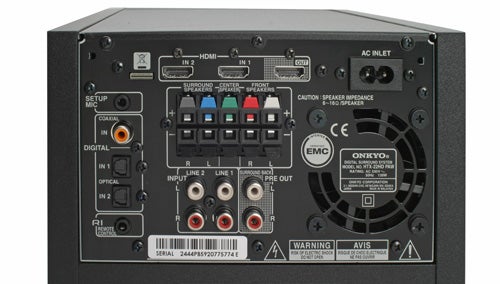 If Onkyo is trying to convince the average consumer of the benefits of surround sound, it needs to make installation as easy as possible, and thankfully that’s exactly what it has done. Never before have I seen a speaker package that’s so easy to install, and comes with pretty much everything you’re likely to need in the box. As well as the subwoofer and five satellites, you get a remote control with batteries, a power cable, an optical digital audio cable and, most importantly, an HDMI cable. Of course Onkyo is assuming that you’ll already have HDMI cables for your source devices, which is fair enough.

I personally don’t believe that speakers need to come with speaker cable, since the type of cable you use is a very personal thing, and can depend on both your listening preference and your environment. However, with an all-in-one package like this, I can appreciate why Onkyo has felt the need to supply speaker cable, and the package as a whole benefits greatly from its inclusion. 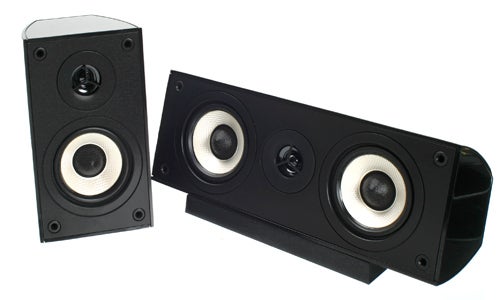 Not only has Onkyo delivered speaker cable cut to lengths that should suit installation in a reasonably sized living room, it has also made it almost impossible to use the wrong cable length. Each channel on the rear of the amplifier is colour coded, as is each speaker, but the most impressive part is that each length of cable is also colour coded, making it virtually impossible to get things wrong. Of course if you’re looking to run your rear speaker cable around the ceiling, or some kind of similarly unobtrusive route, the supplied cable may not reach, but if you’ve got carpet, you should be able to simply lift up an edge and lay the cables underneath. 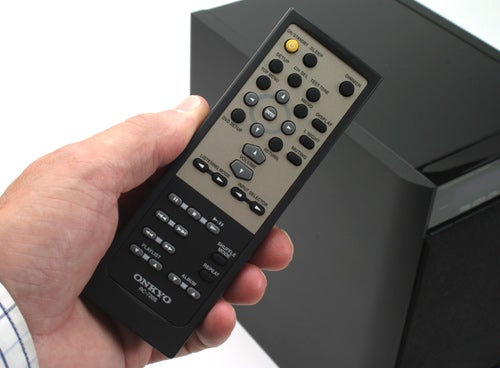 Amazingly, considering the price, you also get a setup microphone in the box, once again ensuring that installation is as simple as possible. Once you’ve connected up all your speakers you simply place the mic in the sweet spot and run the auto setup. After test tones have been sent to all the speakers, the system will ask you to move the mic to the right of the room and then the left, running the test signals again in both cases. The result is that the end user doesn’t need to worry about speaker distances and delay settings, everything will be configured automatically. 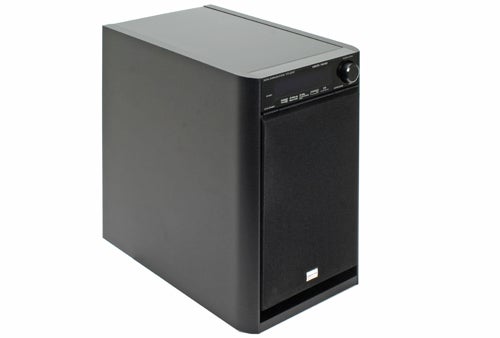 It’s worth mentioning too, that the HTX.22HD is a very compact system, something that I hadn’t realised when I first looked at pictures. The pictures are a little misleading, since I guessed at the size of the satellites from an assumption of the size of the subwoofer, but in reality the sub is quite small. In fact when stood next to the gargantuan sub from the Teufel Concept E400 set, the Onkyo looks positively tiny. The subwoofer actually measures 207 x 325 x 327mm (WxHxD), while the satellites (centre channel excepted) measure 101 x 175 x 111mm (WxHxD), making them pretty unobtrusive.

In use the HTX-22HD threw up no issues, managing to automatically detect and cater for the correct surround sound codec, while also producing levels of volume that belie the modest dimensions of the sub and speakers. Firing up the superb Blu-ray of Watchmen, the HTX-22HD had no problem processing the DTS HD Master Audio soundtrack, filling the room with all the sounds of a debauched and deadly New York City. I was surprised at how cleanly the dialogue came through, without ever being overpowered by the low frequency effects. Subtle surround effects are also well resolved, adding to the atmosphere. 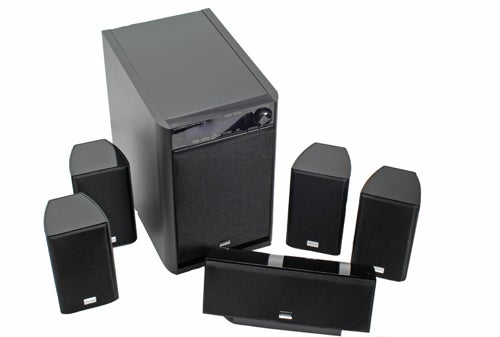 Turning to the Dolby TrueHD soundtrack on the Spider-Man 3 Blu-ray, the HTX-22HD again created a believable soundstage, with positional effects well placed around the viewer. I’ve heard the climax of Spidey 3 sound better on a system using a dedicated surround sound receiver and speaker package, but given the nature and price of this system, it acquitted itself well.


Although the HTX-22HD can go loud, loud enough to annoy your neighbours no doubt, it does lack a little bit of low frequency presence – not so much with big explosions, but more when it comes to subtle background rumblings. It’s here that the Teufel Concept E400 system steals a march on the HTX-22HD, with its far larger sub creating a slightly more immersive atmosphere in some scenes.

It’s also somewhat debatable as to whether a system like this can highlight the advantages of lossless surround sound codecs over the standard, compressed versions of DTS and Dolby Digital. But even so, Onkyo should be commended for including support for the latest sound formats, and given the choice, I’d always want to listen to the best possible audio stream.


It’s important however to remember who the HTX-22HD system is aimed at. Basically Onkyo is targeting consumers who are used to the woefully disappointing speakers that are built into their flat screen TV, so the amount of bass response on offer will no doubt blow them out of their seats. Likewise, the positional effects, clear centre channel and enveloping sound stage will take their movie watching to another level.


Considering the level of codec support, number and type of inputs, the plethora of cables and the bundled set up microphone, the HTX-22HD and SKS11 bundle is an absolute steal at under £400. If you’ve just bought your first Blu-ray player, or are even thinking of doing so, it’s well worth adding this speaker set to your shopping list. 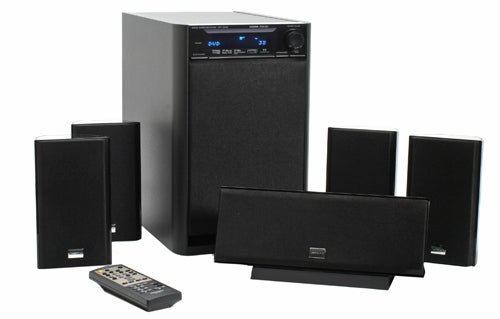 
The Onkyo HTX-22HD and SKS11 bundle may not have the power and presence of the Teufel Concept E400s, but it makes up for that in so many areas. This really is an all-in-one bundle that even the most technophobe consumer would have no problem installing.


The level of codec support is incredible given the price, while the accessory bundle is unbelievably generous. I shouldn’t be surprised, given that Onkyo makes some of the best, affordable surround sound receivers on the market, but with this speaker set it has opened its surround sound expertise up to an even wider audience.