Onkyo used to be a staunch supporter of HD DVD, but when the format was canned it quietly retired the DV-HD805 player and switched allegiance to Blu-ray. The DV-BD606 is Onkyo’s first Blu-ray deck and with a price tag of around £350 it finds itself up against players like the Denon DVD-1800BD, Pioneer BDP-51FD and Panasonic DMP-BD55.


The DV-BD606 is another in a long line of Blu-ray decks that lack BD Live support, despite a growing number of discs on the market with web-enabled features. Its Profile 1.1 spec gets you BonusView PIP access, which might suffice for some movie fans but it does make that price tag harder to swallow, particularly when cheaper players like the LG BD300 offer BD Live straight out of the box.

The Onkyo’s straight-laced, boxy design won’t exactly have guests swooning on the sofa, but the black finish (also available in silver) and brushed lower section mean it’s not completely without charm, and more importantly its build quality is excellent.


Interestingly, there’s an SD card slot on the front panel, which not only supports MP3 and JPEG playback but also lets you upload Virtual Package data from the web for use with BonusView Blu-ray discs (but you’ll need a card of at least 256MB for this).


Eagle-eyed readers may have spotted the aesthetic similarities between the Onkyo and the Denon DVD-1800BD, both of which sport SD card slots, identical display panels and the same buttons on the fascia. That’s because they’re the same player in different clothes, a fact borne out by the similar sockets on the rear panel and other operational similarities. The Onkyo does lack the Pure Direct mode found on the Denon, which turns off the video circuitry to reduce interference with the audio signal, but Onkyo says its player’s superior power supply makes this mode irrelevant.

The socket selection includes HDMI v1.3, component, composite and stereo audio outputs, but Onkyo goes one better than Denon by offering optical digital audio output alongside the coaxial port. But like the Denon it lacks multichannel audio outputs, so if your amp doesn’t have HDMI inputs and HD audio decoding, then Dolby Digital or DTS is the best you’re going to get.


In fact, anyone wanting to take advantage of the lossless quality offered by Dolby TrueHD or DTS HD Master Audio soundtracks will need an AV receiver that decodes them, as the deck’s own decoding talents are limited. The HDMI v1.3 port allows it to output both in bitstream form but when the deck converts either format to PCM it extracts the Dolby Digital/DTS 5.1 core and not the hi-res extension, leaving you with the same sound quality you’d get from the optical or coaxial outputs.


However, there’s a decent set of video features on board, such as the now customary 1080/24p output, Deep Colour support (useful if the industry ever releases any content), a 150MHz/12-bit video DAC and playback of DivX, MP3 and JPEG files from DVDs and CDs. You can also use the deck to upscale DVDs, which will save a lot of cash if you don’t fancy replacing your entire collection on Blu-ray.

Onkyo has done a terrific job at differentiating its onscreen presentation from that of the Denon DVD-1800BD, although both share the idea of splitting the setup menu into Custom and Quick modes. Onkyo’s setup menu looks modern and tasteful, with a logical structure, legible text and cute graphics. The cursor moves around quickly and the options are easy to understand without the aid of the manual, although the various HDMI audio options might require some clarification.


There are two BD Audio output modes, HD Audio Output and Mix Audio Output, and you’ll need to select the former to pipe the raw bitstream to your amp, or the latter if you want to listen to the primary and secondary audio tracks with BonusView PIP content. A separate set of options allows you to select HDMI Multi (Normal), which outputs either bitstream or LPCM, or HDMI Multi (LPCM), which forces it to output LPCM.


The remote is a far cry from the Denon’s elegant zapper – it sports a big, chunky shape and feels light and plasticky, but the button placement and labelling are spot-on and there are handy keys for changing the resolution, activating PIP and accessing the pop-up menu. 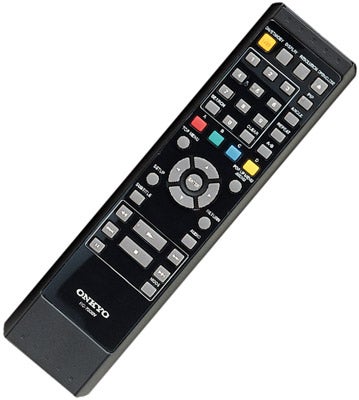 Operating speed is fairly average, and pales in comparison with the LG BD300, our current load-time champion. It boots up in about 25 seconds, which isn’t bad, but takes a whole minute to fire up ”The Dark Knight’s” first menu screen.


The DV-BD606 delivers a pleasing Blu-ray picture, particularly with ”The Dark Knight” in the disc tray. The movie is presented with plenty of detail, deep blacks and vibrant colours, which make the images look rich and cinematic throughout.


Particularly impressive are the spectacular IMAX sequences showing panoramic shots of Gotham or The Joker blowing up the hospital – they’re delivered with exactly the sort of eye-popping clarity and grandeur that the director intended. But it’s equally adept at handling the movie’s frequent night-time scenes and dingy interior shots, and its refusal to relinquish its grip on detail and contrast in the dark makes for a pleasing watch.


The 1080/24p output results in smooth, judder-free movement, best demonstrated by the bat-bike dodging in and out of traffic, while edges are clean and smooth and there’s precious little noise to sully the picture. But a comparison with the superb Pioneer BDP-51FD shows that the Onkyo’s pictures aren’t quite up to the same standard – its images seem just a fraction softer and less distinct, but there’s not much in it.

The HQV Benchmark Blu-ray disc provides further evidence that the Onkyo’s video processing is up to scratch, resolving the edges of the rotating bars during the Diagonal Filter test without the steep pronounced jaggies seen on some budget Blu-ray decks – but the edges look even cleaner and less ‘feathery’ on the Pioneer BDP-51FD.


As for the Film Resolution Loss test, the Onkyo earns a pass by rendering the scrolling test pattern with minimal (but still visible) flicker on the corner boxes, and it plays the shot of the football stadium with composure and minimal moiré noise on the seats – but once again we’ve seen it done better by Pioneer and Panasonic players.

The Onkyo’s DVD upscaling is terrific though, making our copy of ”Pitch Black” look clean, contrast-rich and highly detailed. The bright, bleached scenes on the alien planet really stand out, with the fine detail on the rocky terrain looking sharp as a box of tacks, while shots onboard the spacecraft look slick.


It displays the same classy picture quality with the HQV Benchmark DVD – those rotating bars have rarely looked smoother while detail (on the colour bars pattern and moving video) looks steady and sharp. It’s every bit as good as Onkyo’s DV-SP406 DVD deck, which means that your existing standard definition disc collection is still in good hands if you’re ditching your old DVD player.


Audio quality is also admirable too, particularly with Dolby TrueHD and DTS HD Master Audio tracks through a good AV receiver, but it’s also a dab hand with CDs and MP3s too. The sound (delivered via the analogue stereo ports) is smooth, well-balanced and delivered with plenty of punch.


The DV-BD606 is by no means a bad Blu-ray player, as its picture quality is terrific, but as with several other players on the market we have to question the lack of BD Live on a relatively expensive player, as well as the lack of proper support for Dolby TrueHD and DTS HD Master Audio for people whose receivers don’t boast the relevant decoding.


Truth be told, players like the LG BD300, and Panasonic DMP-BD55 feel like much better value for money, and the Onkyo’s pictures aren’t sufficiently impressive to recommend it over the Pioneer BDP-51FD either. It is, however, marginally preferable to the Denon DVD-1800BD thanks to the addition of an optical digital output and the fact that you can find the Onkyo slightly cheaper online.