With Onkyo’s superb AV receivers selling like hot cakes, it would be madness if the company didn’t have a Blu-ray deck to pair them with. Thankfully it does in the chunky shape of the BD-SP809, a 3D-ready deck that aims to deliver a more mature movie experience than your average budget machine with its high-grade internal components and vibration-snuffing build quality.

Of course, that also means it hits the wallet harder than your average Blu-ray player, but Onkyo is hoping that the BD-SP809’s features and performance (particularly with music, an area where low-cost players often fail to shine) will be enough to convince AV buffs to dust off the credit card.

The BD-SP809’s bodywork is certainly up to scratch, boasting the sort of luxurious construction you’d expect from a flagship player. Measuring an epic 104mm from top to bottom, this is not a deck that slips quietly into a tight crevice. The BD-SP809 needs – no, demands – a root and branch reshuffle of your AV cabinet. But that’s the sort of no compromise player we’re dealing with here, and if Onkyo feels those precious electronics need plenty of room to breathe then who are we to argue.

Indeed, those electronics have been organised with the utmost care and attention. Components that cause vibration have been bolted directly onto the chassis near the deck’s large, sturdy feet. Independent digital and analogue block design reduces electromagnetic interference from the power, drive mechanism and signal processing circuits. At over 4kg the unit is reassuringly heavy and robust too, and it’s fitted with a vibration-reducing top cover.

So its structural integrity is sound, but the look is functional. With no curves or hi-tech touches, it looks like an amorphous black box from a distance, with the bright LED display panel the only discernible feature (the silver version is much more attractive). It’s only when you get up close that you notice the attractive brushed aluminium front panel, which is completely flat and peppered with a cluster of playback keys. There’s also a ‘Source Direct’ button and a tiny LED that lights up when playing a 3D disc. There’s no USB port on the front – this is found on the back to stop USB sticks ruining the minimal appearance.

Rear connectivity is excellent, with gold plated ports giving another indication of the deck’s superior build quality. Two HDMI ports allow you to feed two separate displays simultaneously, or send 3D pictures and HD audio bitstreams to your TV and AV receiver respectively (ideal if your AV receiver doesn’t support 3D pass-through). Other video ports include component and composite video outputs, while on the audio side you get optical, coaxial and analogue stereo outputs. It’s surprising not to find multichannel analogue outputs, but perhaps Onkyo feels its audience is sufficiently equipped to keep everything in the digital domain.

Completing the line-up are RS-232, IR in/out and Ethernet ports. The Ethernet port represents your only way of accessing the deck’s network features, which feels a tad restrictive compared with the many Wi-Fi equipped models on the market.

Onkyo’s receivers are famed for their lengthy and groundbreaking feature lists, but its Blu-ray decks are more modest affairs – particularly when compared with ‘mass market’ decks from the likes of Panasonic or Sony. But it’s pleasing to find that the BD-SP809 is THX certified, which means it ticks all of their performance boxes – colour, black levels, upscaling quality, artefact suppression and support for all the relevant audio formats.

It’s a slight pity that Onkyo hasn’t transferred the web content from its latest AV receivers to the BD-SP809, such as Spotify, Napster or even internet radio. This would have given owners of non-Onkyo receivers convenient access to these popular music services. As it stands, there’s no web content, not even YouTube, but its DLNA 1.5 certification means you can at least stream content from devices on your home network. Supported formats include MP3, WMA, JPEG, LPCM, MPEG-1 and MPEG-2.

When playing files from USB storage devices you can additionally play DivX HD files, and AVCHD is supported from DVD. It won’t play WAV or AAC though, which means you’ll have to convert to MP3 or WMA if you want to play them.

Under the bonnet the BD-SP809 packs a Marvell QDEO upscaler, but not the version that affords 4K upscaling as found in Onkyo’s AV receivers. This one offers the usual 1080p upscaling and i/p conversion, but with advanced algorithms that tackle artefacts and noise along the way. There’s also a high-precision clock for optimal timing of digital signals, which is important when playing music via HDMI.

The remote’s build quality isn’t up to the same standards as the player. It’s light, plasticky and drab – not one you’ll want to leave out on the coffee table. But more importantly, it’s easy to use thanks to the clear labelling and intuitive button layout, which puts the menu and playback controls under the thumb and clusters the less important keys together at the top.

Onkyo takes a keep-it-simple approach with its onscreen displays. The central Home menu is a basic but effective interface, with four icons floating on a black background. It’s a little sluggish to respond but not intolerable. It provides access to Disc, USB, Home Network and Settings – the Settings menu uses straightforward lists, with the different areas down the left and options on the right. It helpfully provides a brief description of each option at the bottom of the screen. 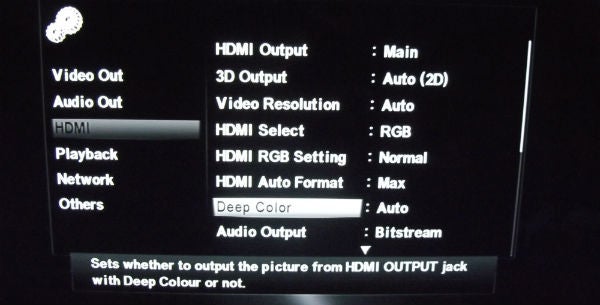 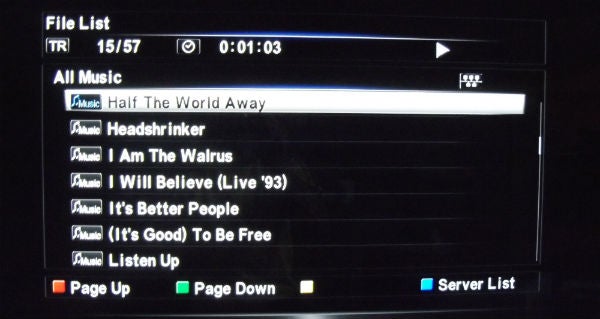 Network streaming was temperamental during our test. There was a short delay before the BD-SP809 saw our Windows 7 PC on the network but once it popped up in the list we were able to play music reliably. But then we used another function, came back and the deck refused to find the server again. Still, in use the menus are easy to follow, and searching long lists of files is made a little easier by the colour coded page up/down shortcuts. 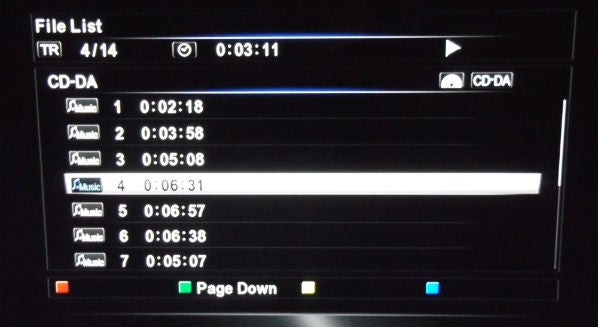 The BD-SP809 is in no hurry to load Blu-ray discs. After hitting ‘close’ on the disc tray, it takes one minute twelve seconds for Terminator Salvation’s Sony Pictures logo to appear, which harks back to first-generation player loading times. Other discs fire up faster though.

With the Silicon Optix HQV Blu-ray, the BD-SP809 copes with most of the video cadences thrown its way but it’s by no means flawless. It locks into the Video Resolution Loss test instantly without any strobing or flicker. The Diagonal Filter test is faultless, with crisp clean lines and smooth movement all round.

The Film Resolution Loss test is often the one that catches players out though, and that’s the case again here. When the test pattern first appears it has a fit, strobing and flickering all over the shop, but then settles down and only the vertically striped boxes flicker. There’s also a little bit of flickering among the seats during the football stadium clip. This should have no real bearing on real-world 1080/24p Blu-ray movie playback, but does indicate a couple of chinks in the deck’s overall processing armour.

Moving onto movies, we find that the Onkyo delivers stunningly crisp pictures. Indiana Jones and the Kingdom of the Crystal Skull looks so sharp and textured you’ll almost – almost – forget about the shoddy plot and laughable set-pieces. Check out the detail on dusty terrains, the walls of underground chambers and the beautifully rendered leaves and branches in chapter 10’s jungle scenes.

Ridiculous though they are, shots of Shia LaBoeuf swinging with the monkeys demonstrate the deck’s fluid and focused motion handling. There’s also a beautifully expansive contrast range and a radiant colour palette that dazzle when displaying the movie’s exotic locales. Its out-the-box picture is pretty good, but spend a little time tweaking the settings and you can get some stunning results.

We can’t fault its 3D performance either. The BD-SP809 passes our 3D Avatar disc to the screen without any problems. The stereoscopic images are steady and composed, plus there’s an entrancing depth and motion is fluid.

This masterful movie performance is complemented by luxurious sound quality. Frank McComb’s A New Beginning sounds smooth and mellifluous, with greater clarity and warmth than you’d get from most budget players. Vocals enjoy a pleasing purity of tone too. So if you love music this is a decent choice, but it’s a shame that there’s no support for DVD-Audio or SACD as found on similarly priced decks from Cambridge Audio and Denon.

But on the flipside, the lack of Wi-Fi and web content, temperamental media streaming, slow disc loading and limited format support might deter some buyers. If these things bother you, check out the Panasonic DMR-BDT310 or Sony BDP-S580, but if your only concerns are solid AV performance and build quality then the BD-SP809 is certainly worth a look.