It’s not often I watch so called reality TV and even less often will I find myself admitting to actually liking it, but every now and again one of these programmes just hits the spot in a way that somehow makes for compulsive viewing. The Hotel Inspector is one such programme that I often find myself being drawn into and I even gave The Restaurant a regular sideways glance. However, the undisputed champion of the current crop of reality TV programs is Dragons’ Den. It’s combination of snide and disparaging put downs, hilariously bad presentations, and equally appalling inventions juxtaposed by the occasional genius idea – you’ve got to try Reggae Reggae sauce – makes it not just great entertainment but an occasionally interesting and informative programme.


All well and good, you may be thinking, but what does this have to do with plug sockets? Well, one of the poor saps to risk personal humiliation and commercial downfall by appearing on said show was showing off an apparently exclusive new invention that he’d been working on in his garden shed. This invention was a type of multi socket extension that, when the device attached to the ‘master socket’ was turned off, would automatically switch off the rest of its sockets. It was a truly brilliant invention and I was instantly sold and so were the Dragons. 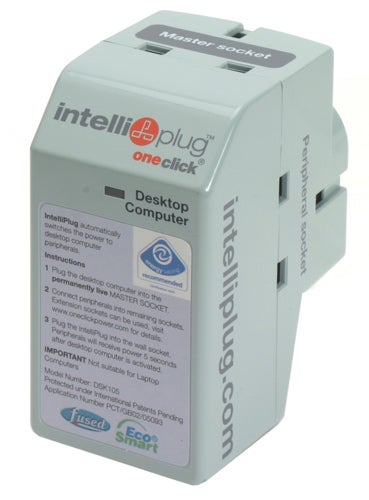 Unfortunately it turned out the inventor didn’t actually have the worldwide patent he claimed, primarily because someone had already beaten him to it, and the whole deal fell through. Fortunately for the energy saving conscious amongst us, though, a quick bit of rummaging around the Internet revealed that one company, namely OneClick, is already making these wondrous devices in the form of the Intelliplug and Intellipanel, adapters and extensions. So a few emails, and a visit from our friendly local delivery man, later we have a couple of Intelliplugs in our offices ready to sink our reviewing claws into.


To recap then, what these things do is turn off attached devices when the master device is also turned off. The perfect example, and primary target, of which is a computer with all its peripherals like monitors, external hard drives, printers, networking devices, and speakers that need to be turned off when you’ve finished with the computer. You plug the Intelliplug into a normal mains socket then the computer into the master socket and all the peripherals into the peripheral sockets. Then, when you turn your computer off, the Intelliplug detects the drop in current draw and after a short delay (approx 5 seconds) turns all the other devices off – saving you the trouble of having to turn them all off by hand. Then, when you turn the computer on again, it will turn all you peripherals back on as well.

Not only is this extremely convenient, it’s also a great way to save energy because, as we’re constantly being told, leaving stuff on standby still uses a fair amount of power and a lot of computer peripherals use external power supplies which still draw current even when the device is off. In contrast the IntelliPlug uses a mere 0.4 of a Watt when in standby. So if you use a few of these for all your computer peripherals, the various boxes plugged into your TV, and your Hi-Fi, and whatever else you can think of, you can be set to save a nice chunk of change on your electricity bill.


The actual models I’m looking at are the IntelliPlug (#DSK105) and USB IntelliPlug (#USB105) three way adapters. The USB in the latter refers to its ability to detect when to turn peripheral devices on when used with a laptop, which I’ll explain in a little more detail in a moment. Each plug has three sockets – one master and two peripherals – so you can control two extra devices, which is enough for your monitor and a set of speakers, say. However, if you have a rather more complicated setup then you may want to look at OneClick’s IntelliPanels that have seven peripheral sockets and can be had for around £20. 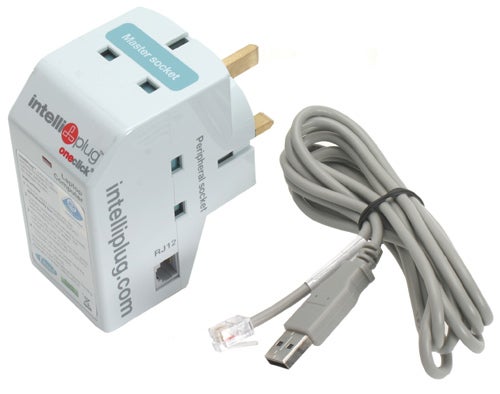 It goes without saying that the aesthetic qualities of a plug socket are not going to be high on most peoples’ agenda. However, I can’t help but point out that these things aren’t for show, in any way, shape, or form. Having complete instructions and annotated plugs and sockets makes for great usability but doesn’t do much for the looks department. Good, then, that the IntelliPlug’s primary use sees it being tucked down the back of a desk or TV cabinet.


While the setup of the non-USB plug couldn’t be more obvious and straight forward the USB version requires a bit more explanation. The reason for its existence is that a large number of laptops don’t suck up enough power to trigger the master device switch. So if you use a laptop as your master device with the standard IntelliPlug, your peripherals will never turn on. However, the USB version uses a special cable that runs from the IntelliPlug to a USB port on your laptop. So, when you turn the laptop on, its USB ports are activated, which the IntelliPlug detects, so it turns the other devices on. It’s a system that works very well but does have one obvious flaw in that it takes up a USB port on your laptop, so you may want to invest in a small USB hub as well.

To test the effectiveness of the IntelliPlug system, I plugged my work computer and two monitors into the standard version and measured the power drawn with the computer on and off. I then plugged the computer and monitors into a standard extension cable and did the same test, once with the monitors left on standby and once with them turned off manually using the buttons on the front. When turning the monitors off manually, they drew tiny amounts of power and the difference between using the IntelliPlug and just a normal extension cable was pretty minimal and certainly not worth the £15 outlay for the plugs themselves. In fact, the computer was using 7W while idling, so it was far and away the most power hungry part. However, if the monitors are left on standby, the difference becomes all too apparent and the IntelliPlug starts to justify itself.


Now, you could argue that turning off your monitors isn’t that much of an inconvenience, and you’d be quite right. However there are four counters to that argument. Primarily is the fact that, it genuinely is a bit of a pain to go round turning off all your equipment at the end of the day, especially if you want certain things left on and not others, so you can’t just turn the lot off at the wall. Secondly, I only use two 17inch monitors but if you have two 30in displays, or use the plug for something more power hungry, even when the device is ‘off’, you will see a larger difference. Third, using the plug to power equipment that is otherwise inconvenient to turn off fully – like routers and modems for your computer, or set top boxes and DVD players for your TV – makes a total power down a lot easier. Finally, while there are only two sockets on the IntelliPlug, you can plug standard extension cables into these and power many more devices and, when you combine the very small trickle of power from many devices, the power savings begin to add up.

Ultimately, the IntelliPlugs and IntelliPanels are primarily labour saving devices more than power saving angels. If you can easily reach all the mains switches, to turn your equipment off, then you’ll save more power doing that. However, if like me you favour the idea of just pressing the power button on your TV remote and turning off your DVD player, surround sound system, HTPC (and associated external water cooling kit), and gaming systems all at once, you’ll find these little plugs indispensable.


The OneClick IntelliPlug is one of those ingeniously simple devices that once used, you’ll wonder how you ever lived without it. It may not be the most effective way to save power, and is really more of a labour saving device than anything else, but if you have a lot of AV and IT devices around your home, I can’t recommend it highly enough.