The screen says “Game Over” and it means it.


It comes as a bit of a shock – we’re not used to this sort of thing these days. In 90 per cent of modern games you don’t even see a proper Game Over screen, just a restart menu or a loading screen while the last checkpoint kicks into action. Of the remaining 10 per cent, the Game Over screen is only joking, and the game is about to offer you the chance to load your last saved game anyway. Omega Five, however, is a proper, old-school arcade shoot ‘em up. Run out of credits half way through level three, and you’re going right back to the start of the game, from whence you’ll have to blast your way through levels one and two before you even get back to the point of destruction. For those of us who were raised on Gradius, Nemesis, R-Type and Thunderforce III, this is a jarring reminder of how things used to be. For those who came into games during the PSX/PS2 era, it’s going to be a harsh history lesson. 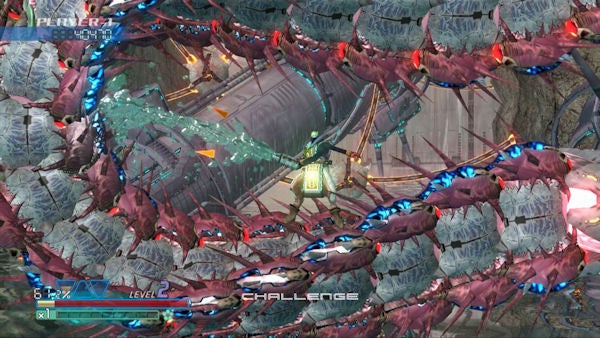 But then the latest game on Xbox Live Arcade is a genuine throwback to those good (or bad) old days. Omega Five is a side-scrolling 2D shoot-em-up with a scattering of 3D elements, based heavily on Capcom’s Forgotten Worlds but laced with elements of Nemesis and R-Type. The screen scrolls (mostly) from left to right at a fixed pace. Enemies fly, stride or lumber (mostly) from right to left towards you, spouting ludicrous quantities of bullets, beams, mines and missiles. You dodge incoming fire and shift position using the left analogue stick on the 360 gamepad, while aiming a stream of whatever your current weapon happens to be using the right analogue stick. Work your way through the level, battle a boss and it’s on to the next one. Repeat four times and you’ve cracked the game. Up to a point, that’s all there is. 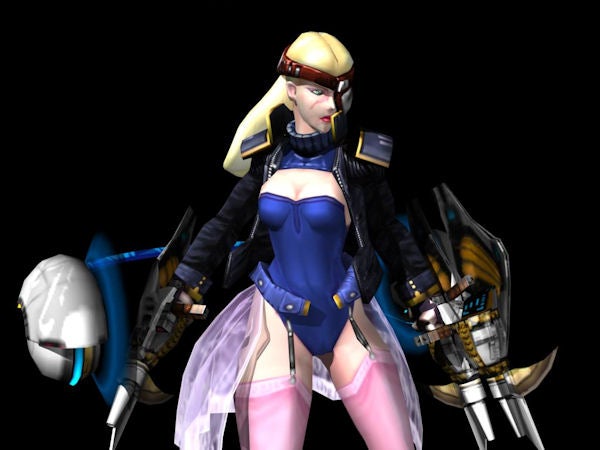 Up to a point. For a start, you won’t get very far with your default destructive capabilities. You don’t actually have a space-fighter in Omega Five. Instead, as in Forgotten Worlds (Did you find the guy? – ed.), your hero or heroine floats in space using some sort of ingenious anti-gravity harness, using an upgradable mini-gun to blast anything in their path. You can play either as Tempest, a burly alien, or Ruby, a saucy space-pirate wench. The latter cheerfully wears suspenders and a diaphanous skirt, presumably on the quite sensible basis that when you’re floating 20 feet above the ground in the middle of a galactic war, everyone below can see your knickers anyway. Plus, any men reading will know how distracting a glimpse of thong can be, which doubtless gives Ruby a crucial advantage in combat.

Anyway, the point I was trying to make before getting distracted by Ruby’s incongruous lingerie is that you need to keep upgrading your weapons by blasting away special floating canisters that break apart to reveal fearsome power-ups. Our heroine kicks off with a laser beam, while the rather less appealing hero begins with some kind of flamethrower. By upgrading Ruby you can move up to a range of spectacular power-beams, while upgrading Tempest gives you a selection of weird blobby weapons that do, at least, show off some neat fluid rendering effects. The fact that his gun is waist-mounted can mean that Tempest’s fluid-based attacks themselves look a little odd – this might be the first game I can think of to hint at what it might be like to widdle over a colossal rampaging robot from a great height. Still, I digress. The important thing is that the further you go on and the more power-ups you collect, the more damage you mete out and the less you have to worry about the millions of ill-wishers making their way towards you. So far, so Nemesis. Well, except with skimpy undies and disconcerting liquid emissions. 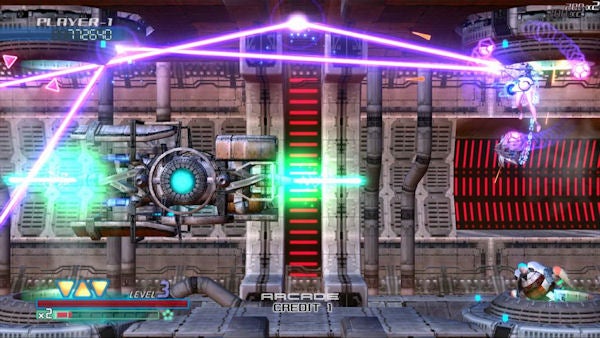 However, Omega Five throws in a few more wrinkles. Both characters can use a smart bomb by clicking the left trigger, while hitting the left or right bumper triggers a field that turns incoming bullets into handy tokens that you can save up towards extra smart bombs (you also get these for every baddie blasted to bits). Each character also has a unique attack on the right trigger. Ruby has a weird satellite module which latches on to enemies and seems to drain their energy while she fires at them. Tempest, meanwhile, can access alternate fire modes for his weapons, switching – for example – between a three-way stream and a longer-range single jet.


And you’ll need all these weapons and all these options, because Omega Five doesn’t exactly play by the established 2D rules when it comes to throwing enemies at you. Enormous monster robots and mine-dropping gunships will sneak their way from the background into the foreground and hit you from behind when you least expect it. Streams of drones will start to appear from the left, bottom and top of the screen, usually when you’re sitting in exactly the wrong place. 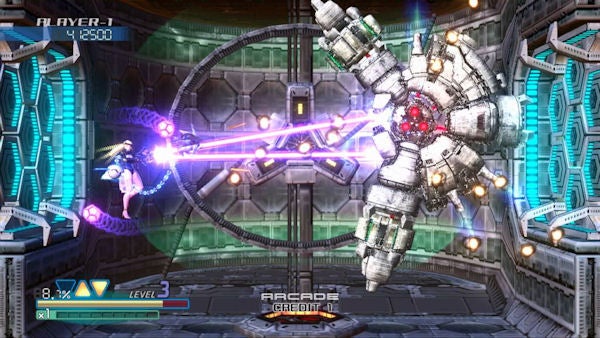 All of this combines to make Omega Five a rather difficult game with a mountainous learning curve. Put a rapidly draining energy gauge together with a meagre three credits and it’s a challenge just to reach the end of the first stage, let alone crack it. As in the old days, your chances of cracking a level on your first attempt are minimal. Instead, you have to learn the attack patterns and work out when it’s best to use your various defensive and offensive capabilities. With no saves and no continues once you run out of credits, you chip away steadily at the game, getting a little further each time while perfecting your technique in the earlier levels. If all of this sounds like hard work, then it can be.

Luckily, it isn’t without its rewards. There’s a real sense of achievement when you crack a level, or even when you just get past some bit that was holding you back. When most games throw you Achievement Points just for completing a level I’m inclined to mock, but here you feel like you richly deserve it – and anyone who gets the Achievements for completing the game with different characters and without using any credits should probably get a medal from Bill Gates. What’s more, the formula is horrendously addictive. Just one more try and I’ll crack this world and be on to the next, you’ll cry. Ninety minutes late, you might just succeed. 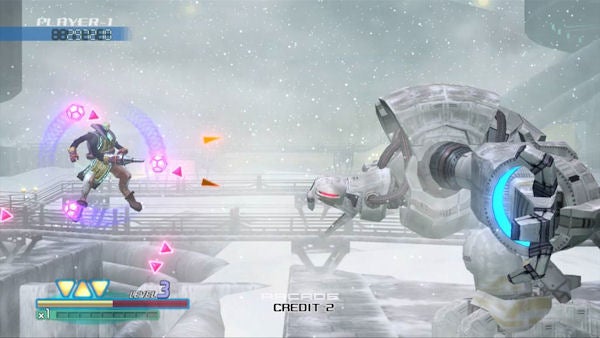 And for once we have a Live Arcade game that isn’t short on eye-candy. Omega Five gives you a pretty good idea what a high definition version of R-Type would have looked like, and at its best – with multiple laser beams strobing across the screen and huge, serpentine space-beasts circling your protagonist – it’s a dazzling experience. Maybe the landscapes of the first level are a little metallic and sterile, but the game has plenty of ideas from there. The second level throws in lush jungle greenery and fully-reflective, rippling water to stunning effect. There’s no question that the music and the sound effects are dated, but if Omega Five throws me back into the days of Thunderforce III but with infinitely better audio/visual quality, then I’m not sure that’s such a bad thing.


In the end, it would have been nice had Omega Five been a slightly less hardcore shoot-em-up experience. The game throws in a couple more credits once you’ve been playing for over an hour, but an option to continue from the current level – while slashing the overall running time – would have made it so much more accessible to the mainstream gamer. The Achievements would have kept the real nutters coming back anyway. However, this is the sort of thing that Live Arcade was made for: a rather superficial, retro thrill machine, but one wrapped in next-gen graphics to die for. 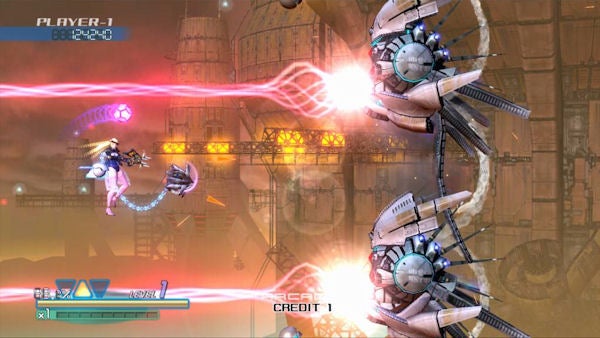 Given the price Omega Five comes highly recommended. Recommended, that is, should you have some nostalgia for the great shooters of the past and the skills and patience to do the game justice. Be warned, however, that if the sight of the Game Over screen leaves you sobbing, then Omega Five is not for you.


A fierce reminder of what shoot-em-ups used to be like, clothed in some lovely next-generation clothing. It won’t be for everyone, but Omega Five is well worth the price and the download.