It’s been quite a long time since I last took a look at an Olympus camera; the last one I reviewed was the terrible FE-4000, back in January. The last time I looked at one of the waterproof mju-Tough range was the 6010 in September last year, so today I’m taking a look at a more recent model, the mju-Tough 6020. 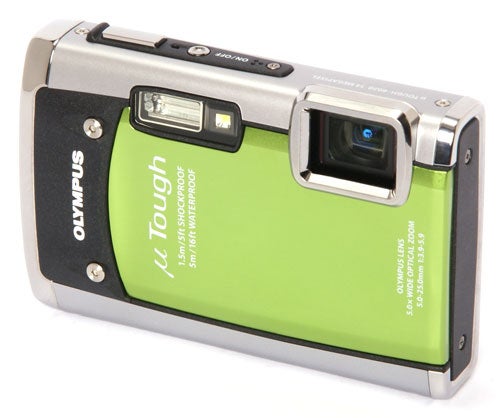 Launched in February this year the 6020 is, not too surprisingly, an update of the 6010. It features a 14-megapixel 1/2.33-inch CCD sensor, a 5x zoom lens equivalent to 28-140mm, and a 6.9cm (2.7 inch) LCD monitor. Like all the mju-Tough range it is designed to withstand a lot of rough treatment, and is waterproof to a depth of five metres, shockproof against drops of up to 1.5m onto a hard surface (plywood, according to the test specification) and freeze-proof down to minus ten centigrade. The body looks like metal, but is in fact made of high-strength plastic, and the build quality is exceptionally good, as you might expect. It is finished in matt silver with chrome trim, with a front panel that comes in four colours; black, metallic pink, metallic blue and the metallic green shown here. 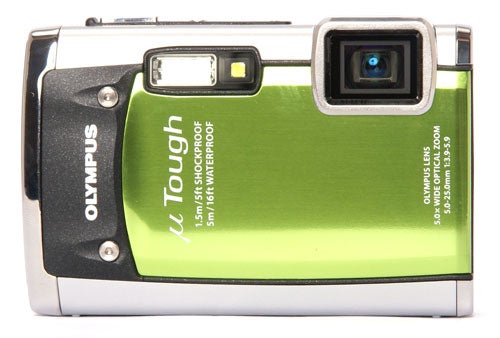 Waterproof cameras have become quite popular over the past couple of years, and the mju-Tough range has more competition than it used to. Its closest rival is the impressive-looking Pentax W90 (review coming soon, I hope), which has a 12MP sensor, 5x zoom and is waterproof to 6m, and currently selling for around £220. It also has to fend off the new Panasonic FT10, which has a 14MP sensor, 4x zoom, is waterproof to 3m and is currently priced at £259. The mju-Tough 6020 comfortably trumps both these rivals on price, since it’s currently selling for just under £200 from some online retailers. However it’s worth noting that some high street stores have it listed at £299, quite a significant difference in price.

The fairest thing I can say about the style of the Olympus mju-Tough range is that you either love it or hate it. The 6020 isn’t a particularly elegant camera, with a rather industrial look featuring exposed bolt heads on the front and a large drilled speaker grille on the back. It’s a large and quite heavy camera, measuring 96.7 x 64.4 x 25.8mm and weighing 178g including battery and memory card. The body design is practical though, and the raised detail on the front provides a comfortable and secure grip, and that speaker grille gives somewhere to put your thumb. The controls are solidly mounted and widely spaced, and it is possible to operate them while wearing gloves. As well as this the 6020 features Olympus’ innovative Tap Control system, which uses an internal accelerometer to control some camera functions and which can now be used for menu navigation. 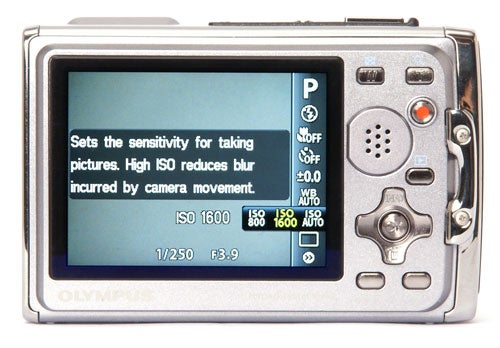 I’ve criticised Olympus’ menu system for many years, and I’m happy to report that it’s finally paid off. The 6020 has an entirely new menu system and I have to say it’s a huge improvement. Main shooting settings are adjusted by a permanent side-bar menu activated and navigated by the D-pad, similar to that found on Casio cameras. It is quick and easy to operate, and carries most frequently used settings, such as shooting mode, flash mode, macro shooting mode, self timer, EV compensation, white balance, ISO setting and drive mode. As well as this there is an extensive but more conventional menu for other camera settings such as image size and quality, focus and metering modes, shadow adjustment and more. Again it is a massive improvement over the old menu system, so major Brownie points to Olympus for finally changing it.


Olympus has now completely abandoned its unpopular xD-Picture memory card format, and the 6020 uses SD/SDHC cards for storage, although it also has a big 2GB of internal storage, with the option to set up custom albums for sharing your pictures. The large, bright LCD monitor is well suited for this, with a very wide viewing angle in all directions. 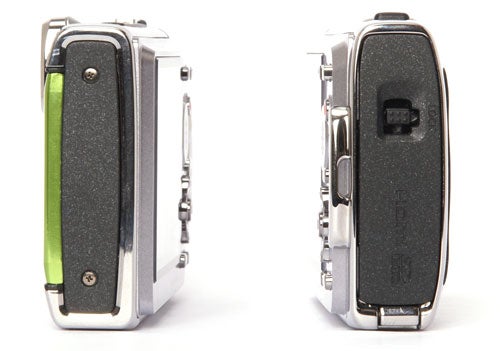 The 6020 is basically a point-and-shoot camera so it doesn’t have a lot of creative options, but it does still have quite a wide range of features. Shooting modes include the standard program auto, an easy iAuto mode with fewer menu options, a scene mode with 19 scene programs including several for underwater shooting, a Beauty mode for improved portraits, a rather cheesy Magic Filter mode with a small selection of fairly horrible effects, and a panorama mode, which includes a sweep panorama mode, which it seems that Sony really should have patented.


Like most modern compacts the 6020 can record HD video in 1280 x 720 resolution at 30fps. Audio is recorded in mono, and full optical zoom can be used while recording, slowing down to avoid dizzying rapid zooms. The zoom motor is silent and cannot be heard on the soundtrack. Unfortunately neither can much of anything else, because the sound quality is very poor. Video quality is rather better though, and is recorded in MPEG4 format.

Blistering performance has never really been a feature of Olympus compacts, and the 6020 is certainly no streak of lightning. It starts up and is ready to take a picture in just under five seconds, which is slow, and in single shot mode its shot-to-shot time is a positively glacial 4.5 seconds. It has a continuous shooting mode, but this isn’t much faster, with a shot-to-shot time of 3.5 seconds. There is also a high-speed continuous mode which can manage approximately two shots a second, but only at 3MP resolution.

The main reason for the poor performance is the autofocus system, which is takes just over a second to lock on in good light. It’s not too bad in low light, although it is much slower, but in very dim light the 6020 has a problem, and it’s a weird one. The camera features a very bright white LED on the front, but for some unfathomable reason this cannot operate as an AF assist lamp, only as a light to illuminate subjects in macro mode. This means that the camera has real problems focusing in very low light.


Although the overall performance is a bit of a let-down the image quality makes up for it, because this is another area in which Olympus seems to have made some changes for the better. The lens is certainly a lot better than some previous Olympus compacts (I’m looking at you, FE-4000), with good edge-to-edge sharpness and no chromatic aberration, although it does produce some barrel distortion at wide angle. The level of recorded detail is as good as any other mid-range 14MP compact, and the relatively low compression of the Fine quality mode preserves it without too many artefacts. I found that the exposure metering tended to over-expose slightly, burning out some highlights in high-contrast lighting, but colour rendition is bright and punchy, and dynamic range is much better than I’d expect from a 14MP camera, especially with the shadow adjustment switched on. 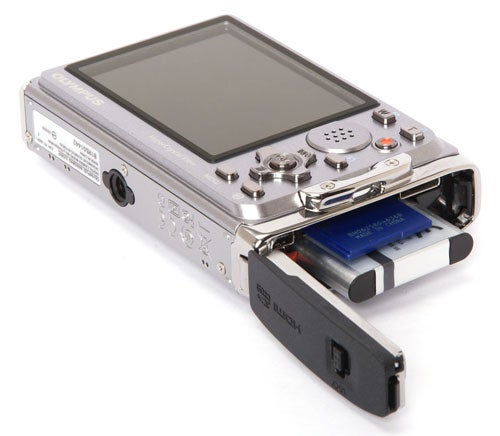 Image noise is also handled much better than some previous Olympus cameras, with very good image quality up to 400 ISO and even the maximum 1600 ISO producing usable results. All in all a solid result for a camera that can take decent pictures almost anywhere.

If you’re looking for a camera for skiing, watersports or other outdoor activities the mju-Tough 6020 is a good choice. Its performance is a bit slow and low-light focusing could be better, but it is well made, easy to use even in difficult conditions, and produces consistently good results, all for a very reasonable price. 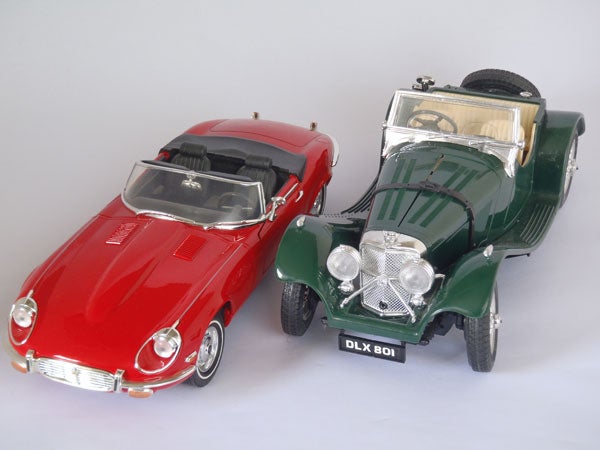 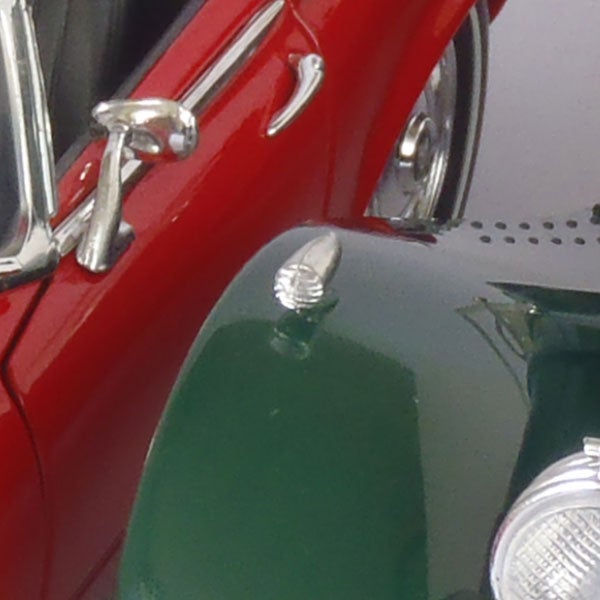 At 80 ISO the picture quality is excellent, with no visible noise. 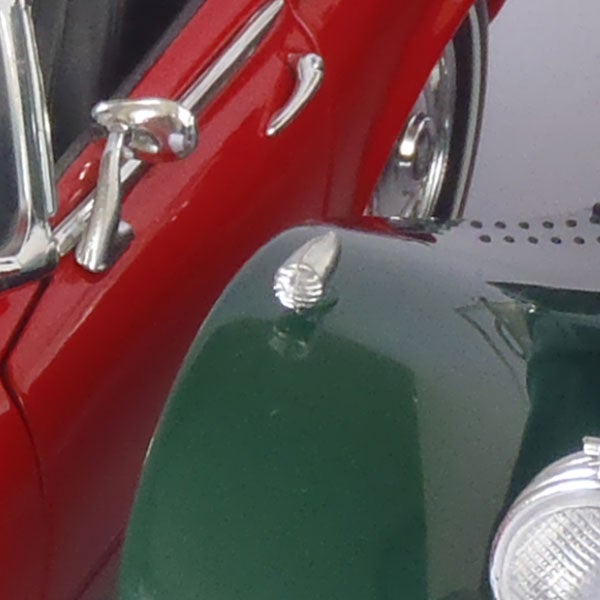 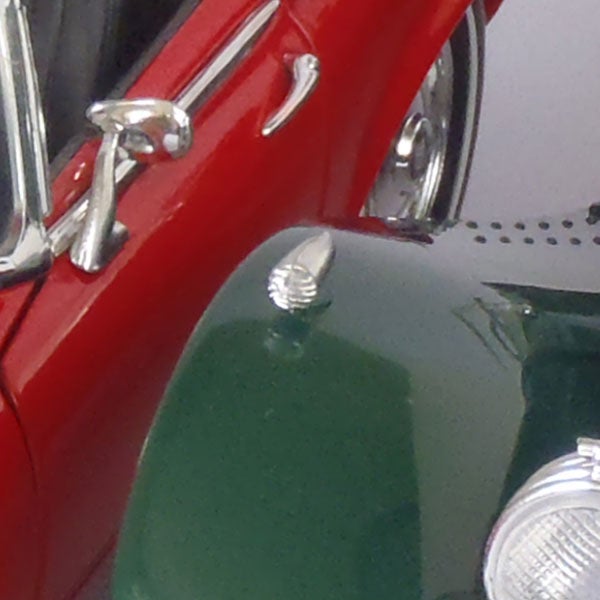 Some slight reduction in detail at 200 ISO, but the quality is still very good. 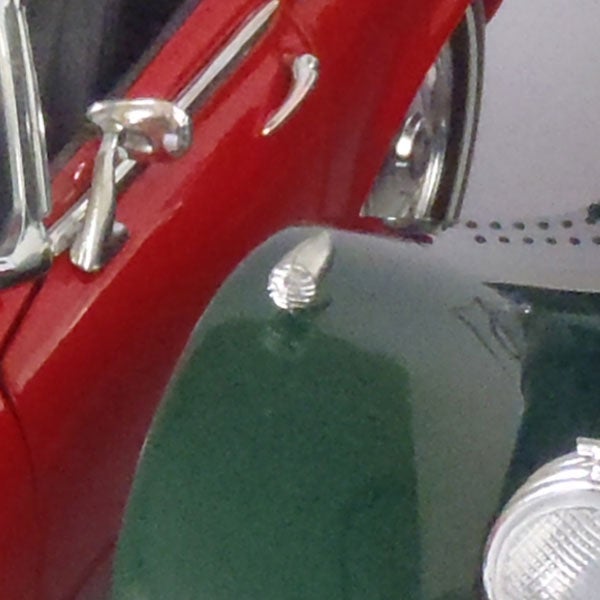 Noise reduction has reduced detail still further, but noise is being kept at bay. 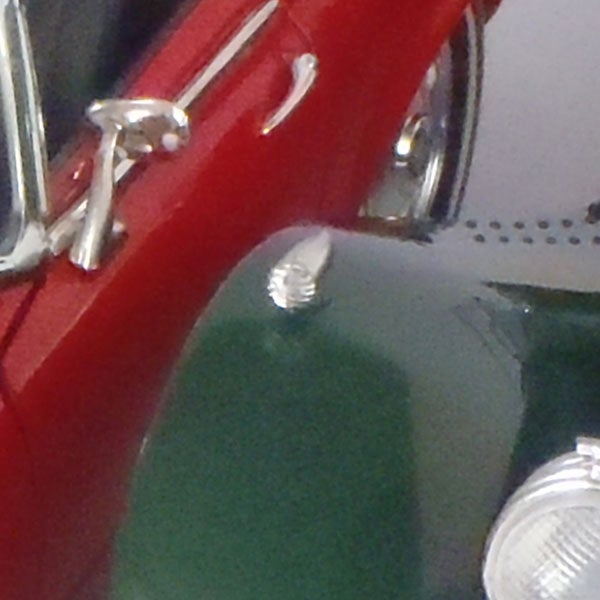 The image is getting a bit fuzzy at 800 ISO, but colour is still good. 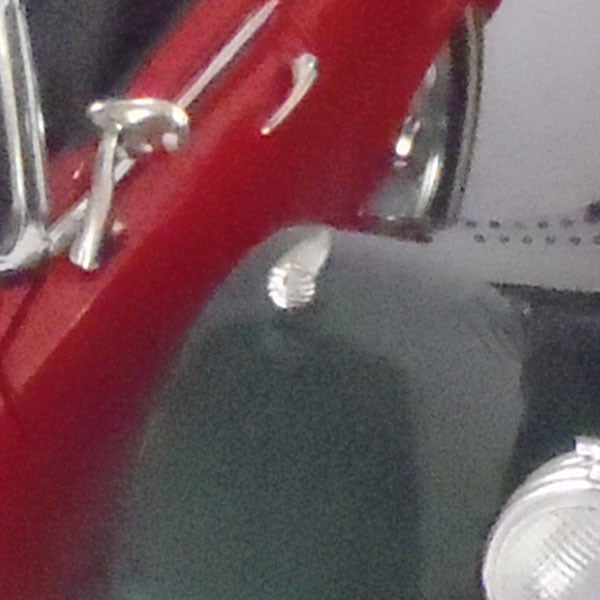 Detail is greatly reduced at the maximum 1600 ISO, but colour is still acceptable for small image sizes. 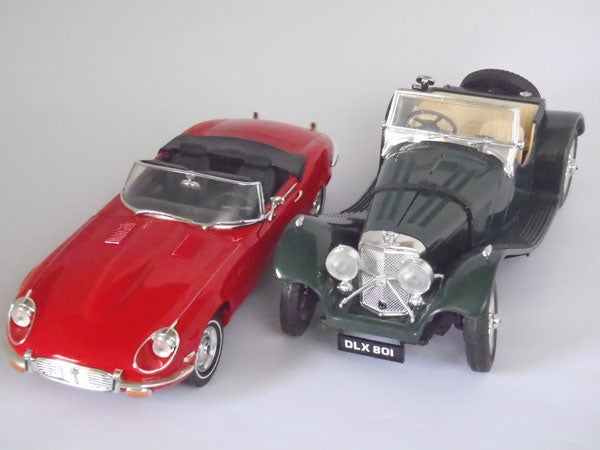 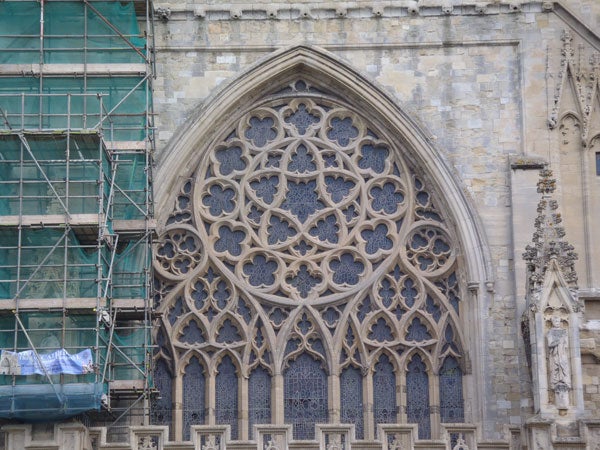 Here’s the usual detail test shot of the West Window of Exeter Cathedral, for you to compare with other cameras. See below for a full res crop, or click to see the whole picture. File size 5.95MB. 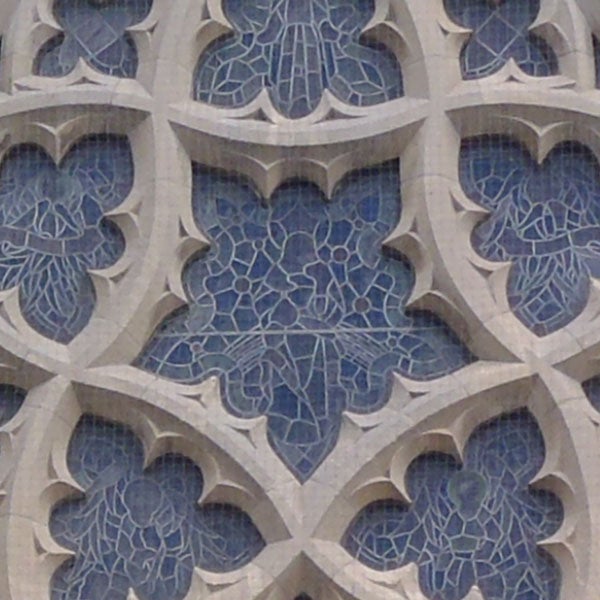 The level of detail is good, and overall quality much improved over previous Olympus compacts. 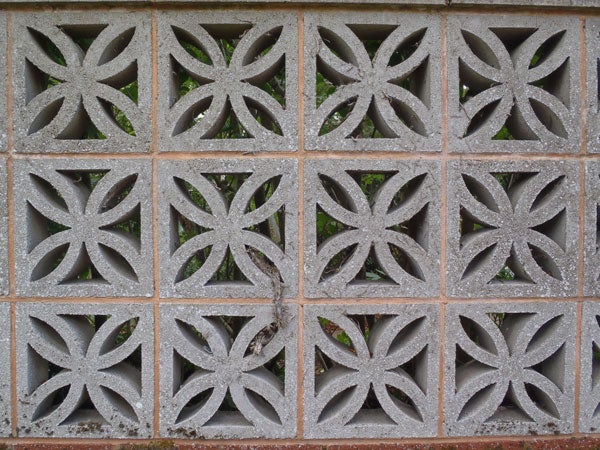 The lens does produce some barrel distortion at wide angle, but it’s not too obtrusive. 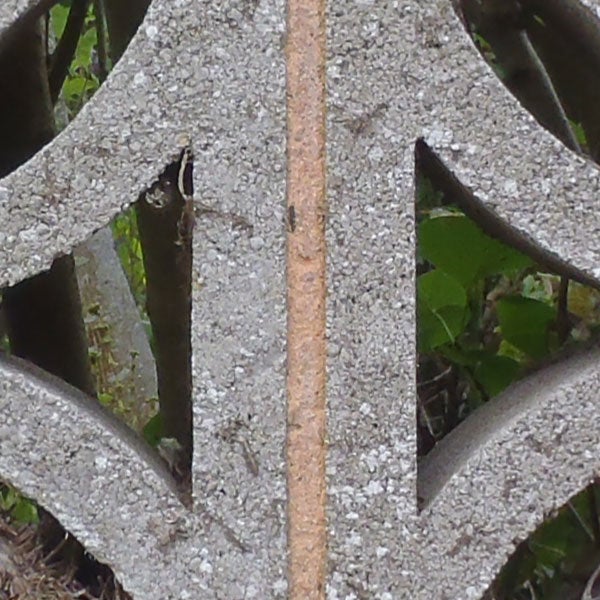 Centre sharpness is very good for a periscope lens. 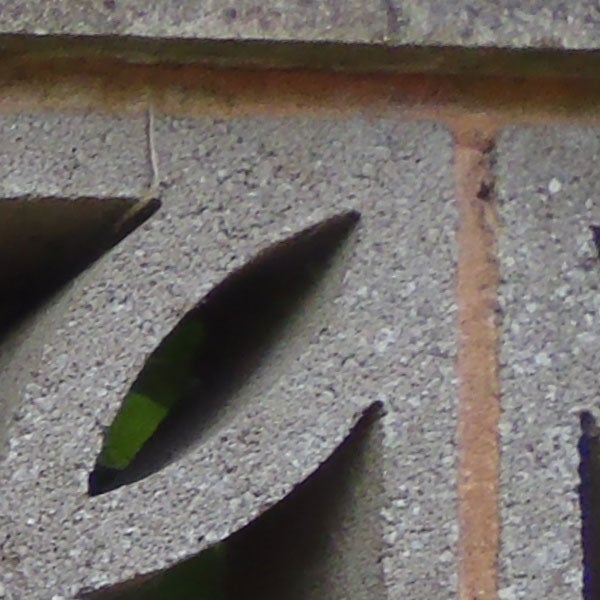 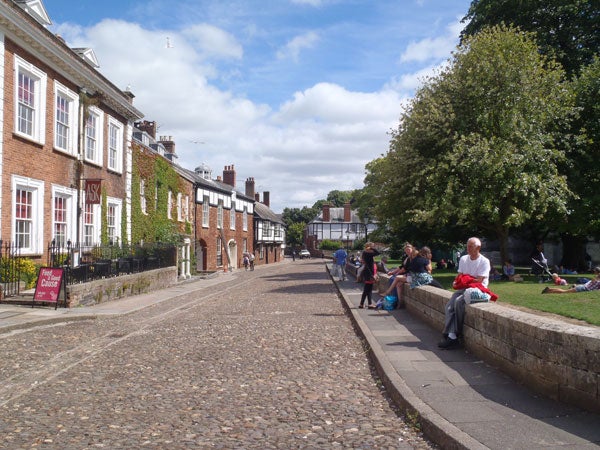 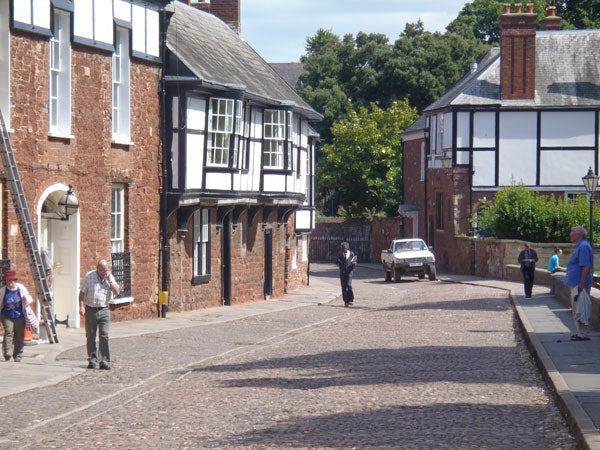 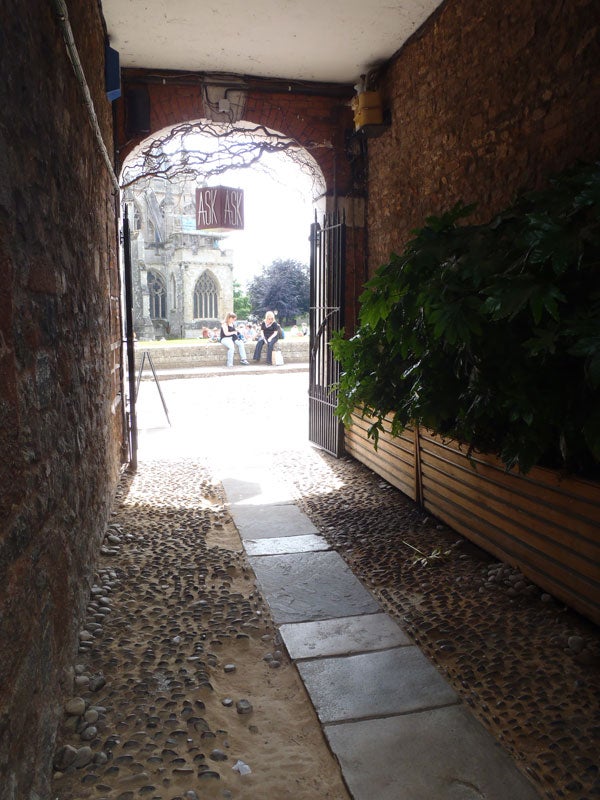 The slight over-exposure has burned out the highlights, but there is good shadow detail. 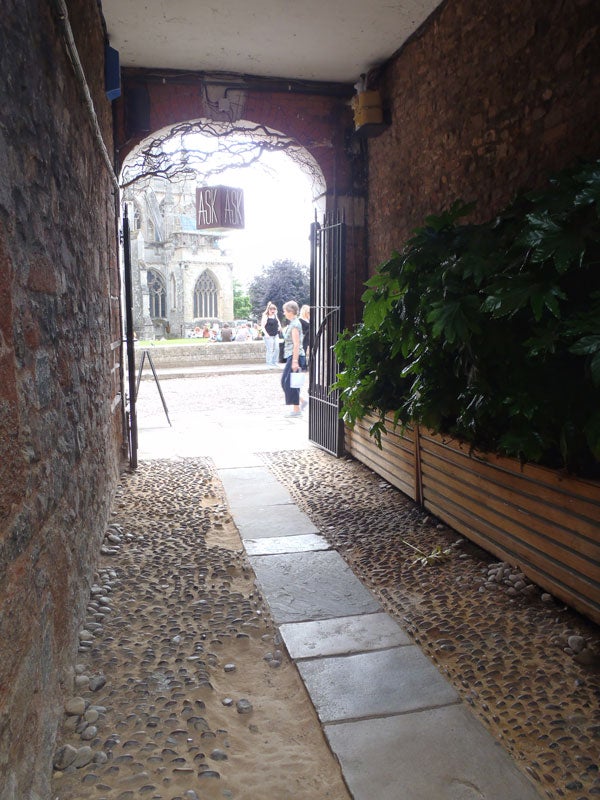 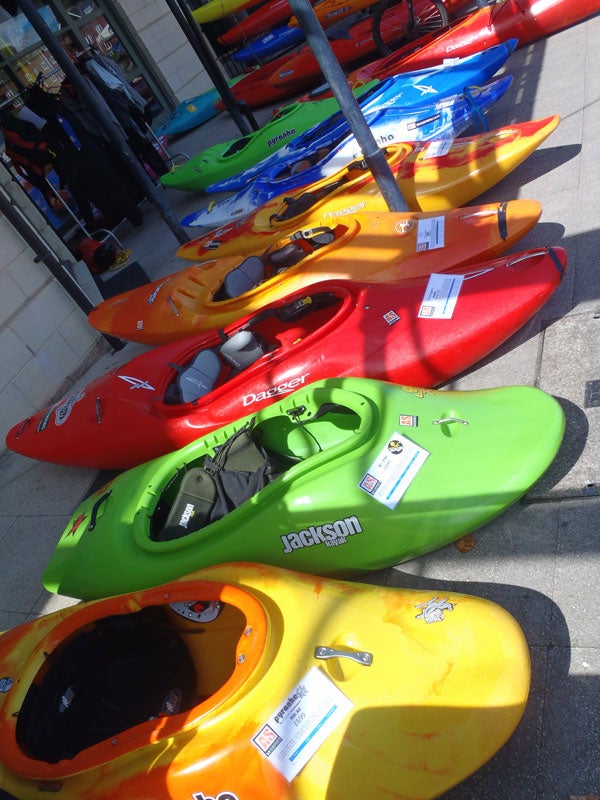 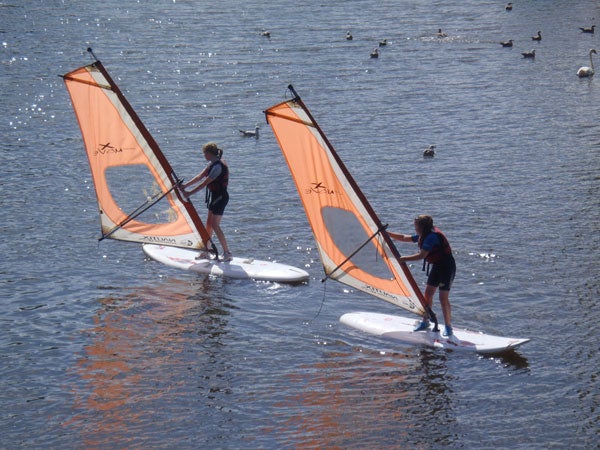 The 6020 is a good choice for outdoor and water sports.