Olympus is arguably the most versatile of all the camera manufacturers. The 32 models that currently comprise its ever-changing range covers everything from cheap compacts to professional-quality digital SLRs, and includes powerful super-zoom models, rugged waterproof cameras and expensive premium compacts. As one of the original Big Five camera companies Olympus has a long pedigree, and over the years it has developed a reputation for innovation and style. 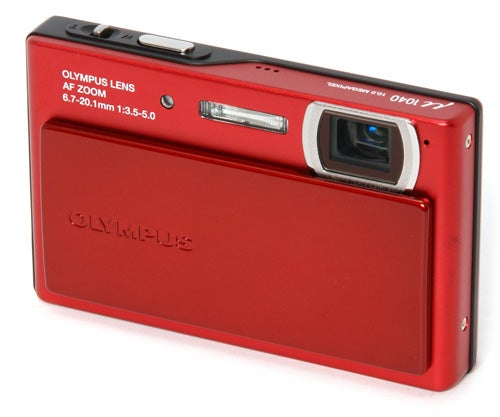 In its compact camera range that style is embodied in the mju series. The first mju cameras were innovative and extremely popular weatherproof premium compacts, and some of the range still embody this spirit with impressive waterproof, shockproof and freeze-proof capabilities, but these days the mju series is also home to a number of less rugged models, such as this mju 1040, a slim 10-megapixel ultra-compact with a sliding front cover and an internal 3x zoom lens. Even a cursory glance will tell you that this is a camera designed for environments no more rigorous than a shirt pocket or fashionable handbag. 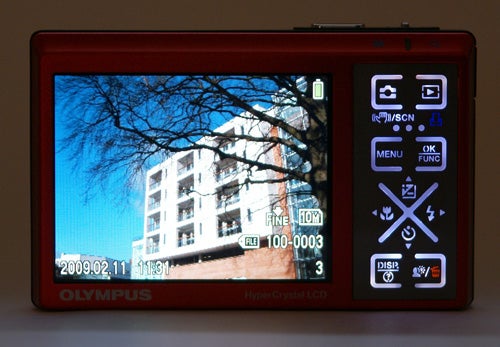 The camera body is mostly metal, although the sliding lens cover, which also doubles as the power switch, is made of plastic. It is an extremely compact and lightweight camera, measuring just 89 x 55.5 x 20.3 mm and weighing 108g minus battery or memory card. The most interesting exterior feature is the unique control panel; instead of the usual buttons and D-pad, the mju 1040 has a metal panel with flexible cut-outs, much like the keypad of a Motorola Razr mobile phone. The panel is internally illuminated, but the light only comes on when a button is pressed. Although it certainly looks very slick and operates smoothly it lacks the tactile feedback of conventional controls, and when not illuminated the labels are hard to read in low light.

The mju 1040 is an incredibly simple camera. Even by comparison to Olympus’ budget FE series its specification and list of features is pared down to the bone. Not surprisingly it has no manual exposure options, but even its automatic features are very limited. It has only eight scene mode programs, only two metering modes (multi-zone or spot), and the drive mode is limited to either single shot or a 14fps high-speed mode that is limited to 3MP. Even the self-timer is very basic, with only a 10-second delay. There are no colour options, no adjustable contrast or sharpness, and the playback menu offers only picture rotation and audio captioning. 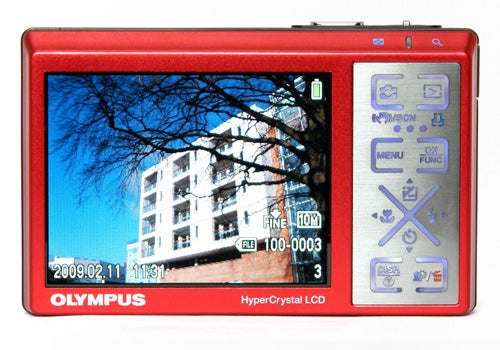 Despite this extreme simplicity, Olympus has still managed to make the menu system unnecessarily complicated. As usual it has a page of icons for eight different sub-menus, despite the fact that the main camera menu itself has only eight options over one and a half pages. It has separate menus for image quality, panorama mode, silent mode and basic set-up, which could all be incorporated into one simple four-page menu, saving a lot of superfluous button-pushing.


One useful menu feature is the Guide mode, which offers help with unusual shooting situations, such as shooting into backlighting or taking close-ups, however once you enter Guide mode there’s no way to cancel out of it without selecting one of the tutorial modes, and then going back into the menu to turn it off, which seems to be a bit of an oversight. There also seem to be some features which can only be accessed via the guide mode, such as a Shadow Adjustment mode, which appears to boost shadow detail in high-contrast shots. 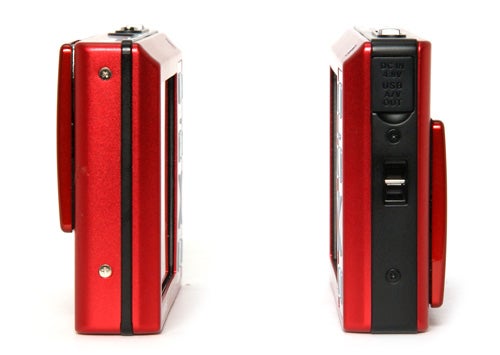 The built-in flash is rather underpowered. The manual claims a maximum range of over four metres, but this is only possible at 800 ISO. At 50 ISO the useful range was more like two metres, and even with the ISO set to auto it had problems lighting a normal sized room, although at least the coverage was consistent.


The video mode is adequate, with 640 x 480 pixel resolution at 30fps, with the only duration limit being the capacity of the memory card. Compared to the HD video modes available on some recent compacts it may look a bit lacklustre, especially since the zoom cannot be used while filming, but it works well and produces decent quality results.

One shouldn’t expect world-beating performance in a camera costing under £120, but while the mju 1040 is quite slow it does have its good points. It starts up in comfortably under two seconds, and shuts down again almost instantly when the front cover is closed. In single-shot mode, at the highest quality setting and using a H-type xD card, the shot-to-shot cycle time is approximately 3.5 seconds, which is pretty slow even for a budget camera, but the high-speed burst mode is pretty impressive. It’s limited to only 3MP, but it fires off a 12-shot burst in a little under a second, which could come in handy for capturing fast-paced action.

The autofocus system is fast and accurate in good light, and even in a dimly lit room it will still focus accurately, although a little slower. However the camera has no AF lamp, so it can’t focus once light falls below a certain level. Generally, if there was enough light to read a menu then the 1040 would be able to focus on it. However the maximum exposure time of ¼ of a second means that you have to use the flash for all low-light shots.


Some previous Olympus compacts have had major image quality issues, and the mju 1040 does have some problems in this department too, although some previous problems have been addressed. Exposure metering has always been an Olympus strongpoint, and the 1040 produces nice accurate exposures in most lighting conditions. Colour rendition is also very good, and the auto white balance is a lot better than some other compacts I’ve looked at recently.


I think Olympus must be using a new noise reduction system, because the 1040 actually has pretty good noise control. Yes, there is noise visible in shots at 200 ISO, and at 400 ISO the noise reduction is already blurring out fine details, but colour rendition remains reasonably accurate right up to 1600 ISO. It’s not perfect, but the results at 800 ISO are perfectly adequate for small snapshot prints, which to be fair are all that this camera is intended for. 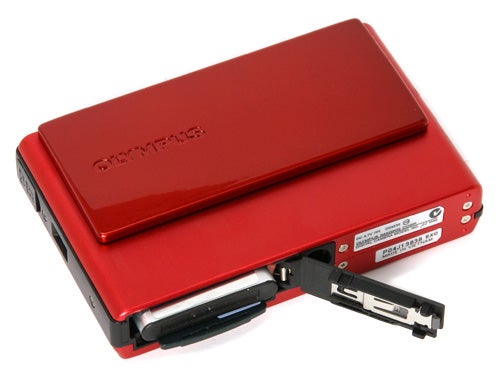 The 1040’s major problem is its lens, which is of disappointingly low quality, producing major barrel distortion at the wide-angle end, and simply isn’t sharp anywhere on the frame, with especially bad corner blurring. This is a real shame, because in most other respects the mju 1040 is actually a nice fun little camera to use, and would otherwise be pretty good value for money. With such poor optical performance however it’s hard to recommend it.

The Olympus mju 1040 is a very basic camera, but it does have a certain charm to it. Design and build quality are good for the price, and despite its unusual control panel and needlessly complicated menu system it is simple and fun to use. Exposure metering and autofocus are both good, but unfortunately it is let down badly by a very inferior lens and slow overall performance. 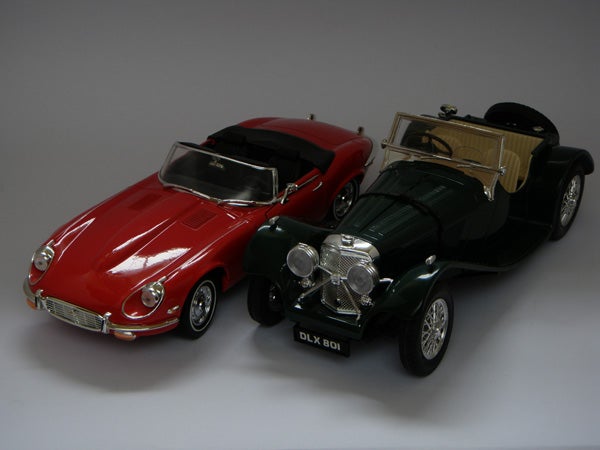 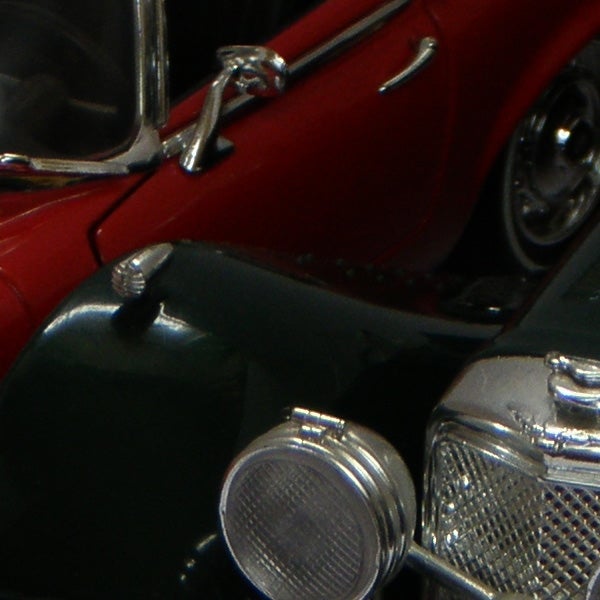 Unfortunately the limited 1/4-second maximum expsoure time has severely under exposed this shot, but you can just about make out that there’s very little image noise at 50 ISO. 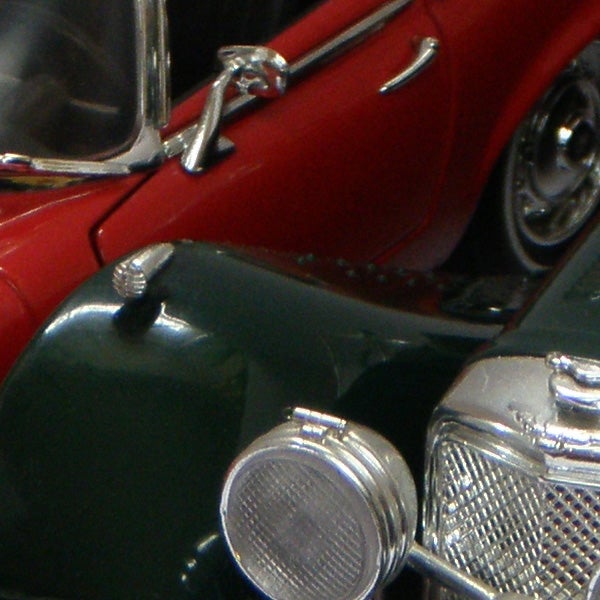 Still slightly underexposed at 100 ISO, and there is slight colour mottling. 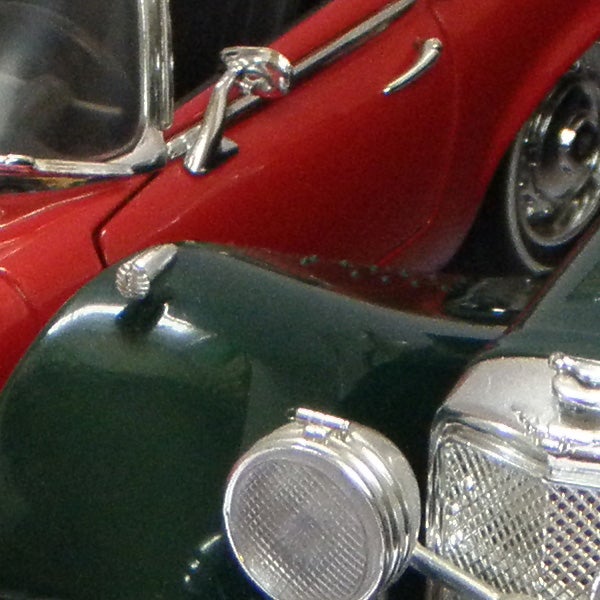 The expsoure is correct in this shot, and the noise reduction has kicked in at 200 ISO, and produced a pretty decent image. 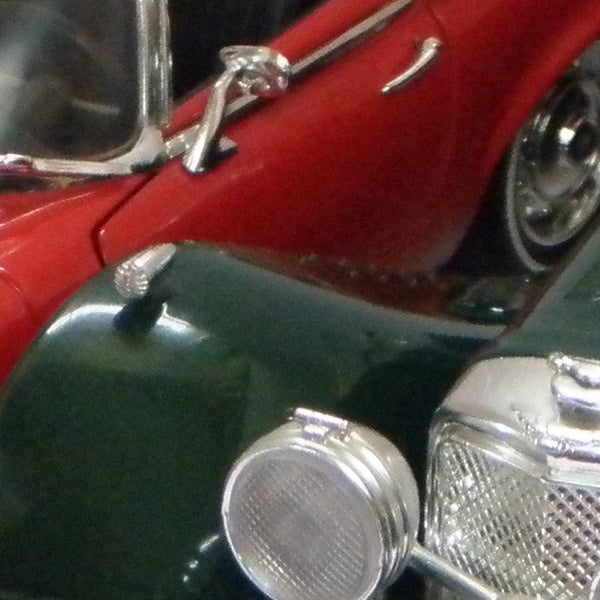 The noise reduction is getting a bit heavy-handed at 400 ISO, but the shot would print well at snapshot size. 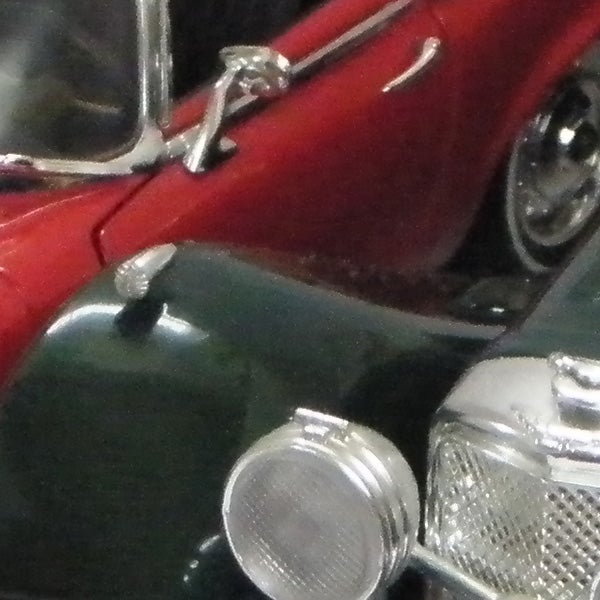 Detail is starting to fade at 800 ISO, but colour and exposure are still accurate. 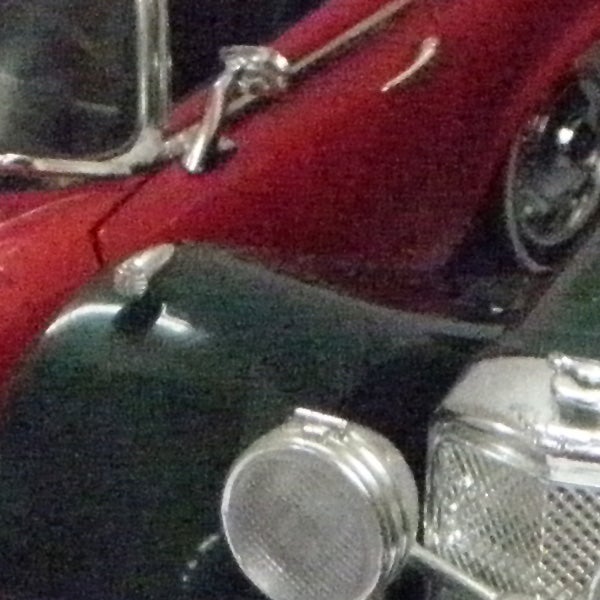 1600 ISO and the noise reduction has reached its limit. 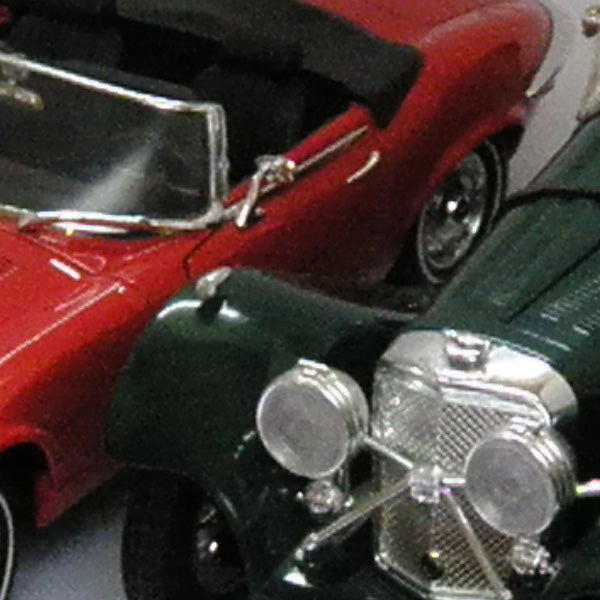 3200 ISO is available at 3MP, but image quality is very poor. 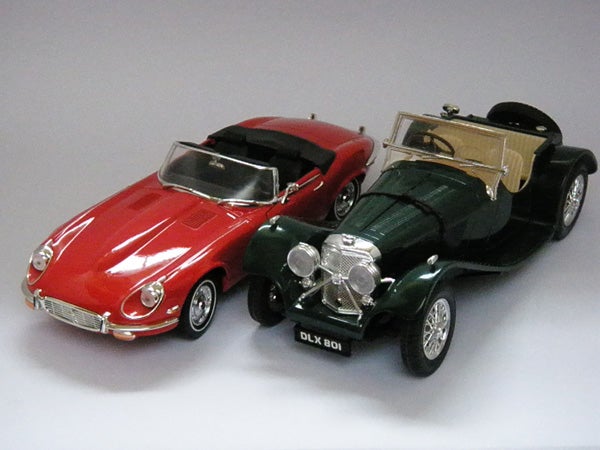 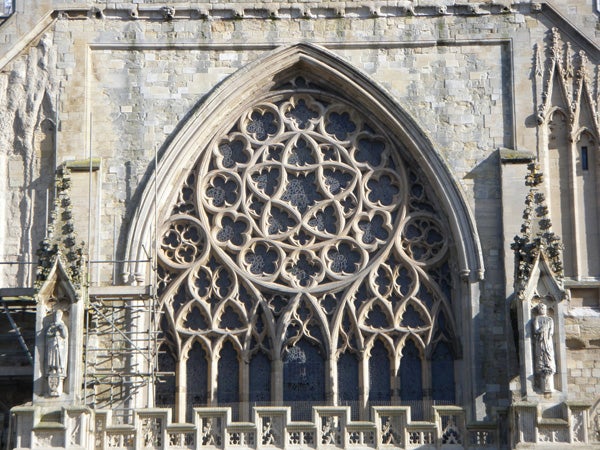 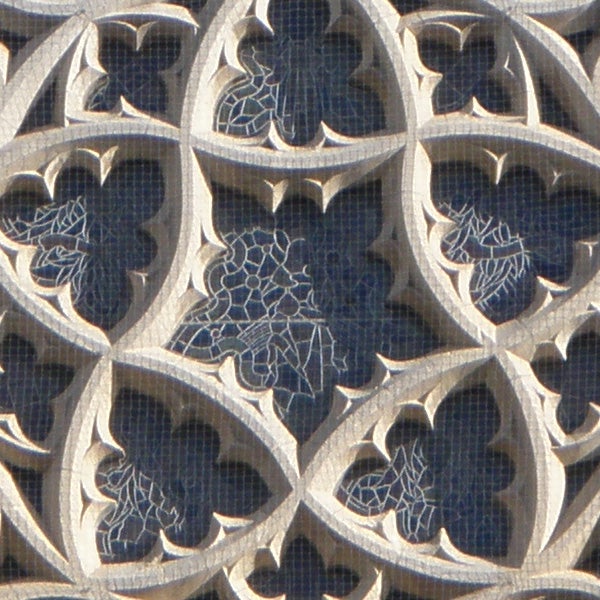 The sensor picks up plenty of detail, but the lens quality just can’t provide it. 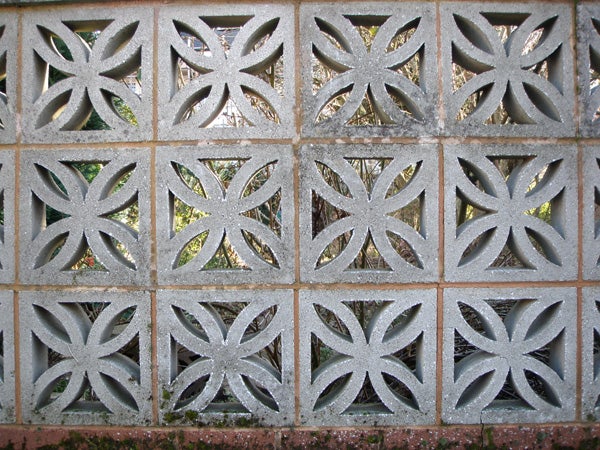 There is significant barrel distortion at wide angle. 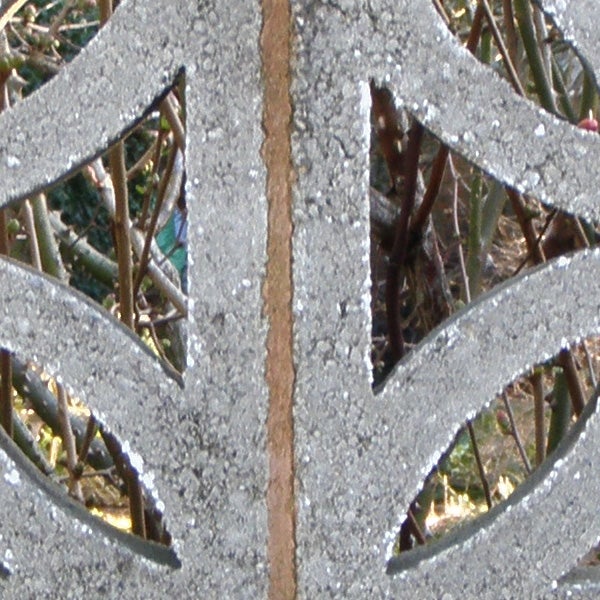 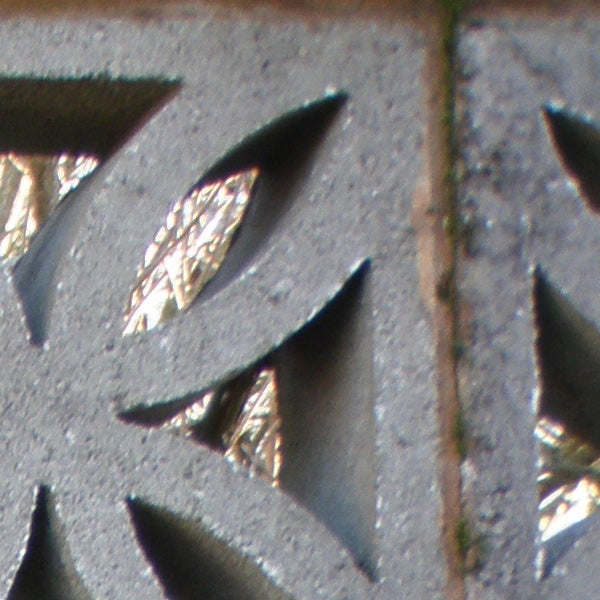 …and edge sharpness is even worse. 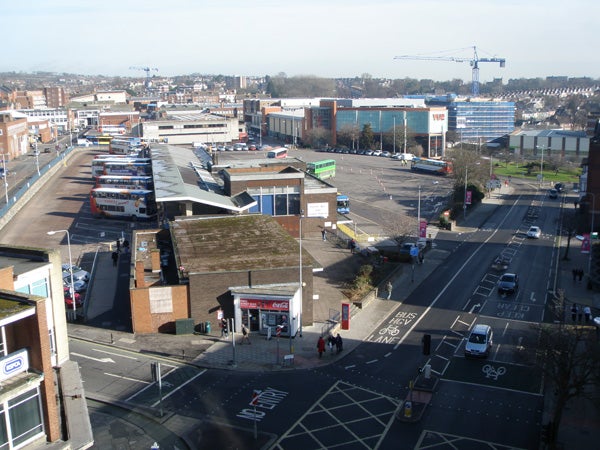 The wide angle end of the zoom is equivalent to 38mm, typical for a 3x zoom compact. 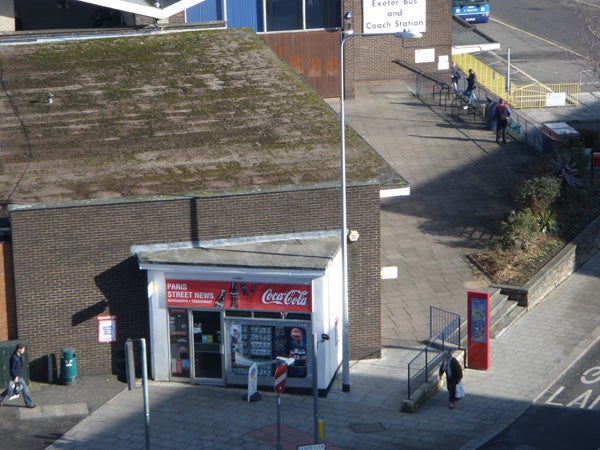 The telephoto end is equivalent to 114mm, again typical for this type of camera. Check out the edge sharpness in the full-sized image. 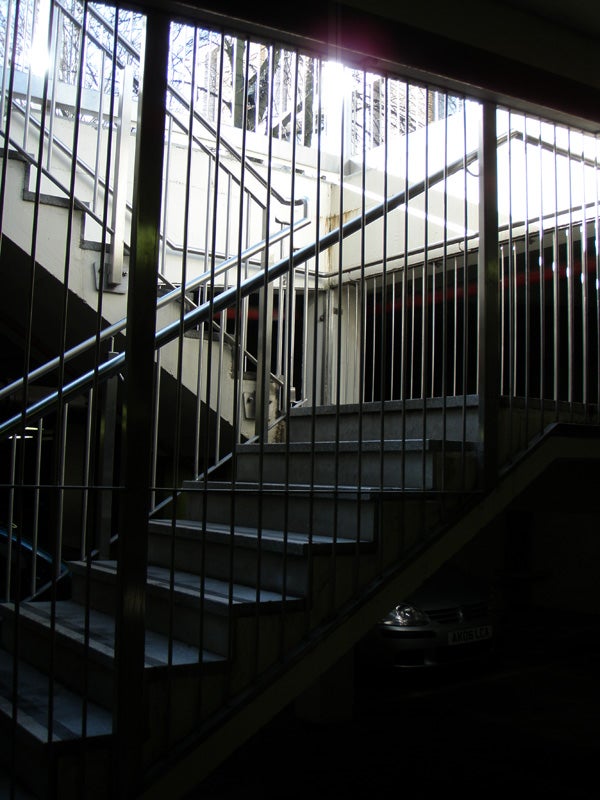 Dynamic range is extremely limited, with no shadow detail and burned out highlights. 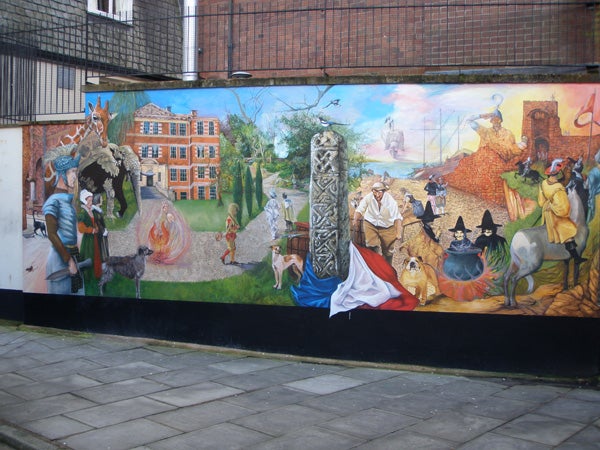