Sometimes I don’t understand marketing strategies at all. I have, sitting in front of me, two digital cameras; the Olympus mju 1010 and mju 1020, which were both launched at the same time in January this year. Both models have 10.1-megapixel sensors, 7x zoom lenses equivalent to 37 – 260mm, 2.7-inch 230k TFT LCD monitors, optical image stabilisation and the usual mju series weatherproof bodies. They look almost identical, except that one has a semi-matt finish to its black bodywork, the other is gloss. Even a close examination can reveal no difference between the two models. Indeed, they even share the same manual. 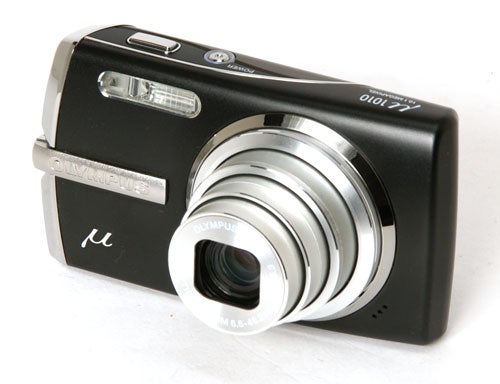 In fact there is only one tiny difference in the specification; the mju 1010 has a “HyperCrystal LCD with a bright display even in brilliant sunlight”, while the 1020 has a “HyperCrystal II LCD with extra bright display even in brilliant sunlight”. Clearly that addition of the word “extra” makes all the difference, because the mju 1010 costs £180, while the 1020 is £196. That’s just over £3 a letter.


Having tried both cameras in the closest equivalent to brilliant sunlight that we’re likely to get here in England, I can say with confidence that there’s absolutely nothing wrong with the HyperCrystal Mk I display on the mju 1010. Consequently this review is based on the less expensive mju 1010 model, since there seems little point in paying seven percent more for such a trivial advantage. I really don’t see the point of producing two distinct models when the difference between them is so slight.


The Olympus mju series of luxury compact cameras is unique. No other series of cameras successfully combines high performance and elegant styling with weatherproof robustness. There are some other weatherproof cameras, such as the unfortunately-named Fujifilm Big Job, although that’s really aimed at industrial applications. Pentax has its waterproof W-series, but there hasn’t been a new model in that range for over a year, leaving Olympus as the sole purveyor of cameras for anyone who’s taste in recreational activities includes a lot of splashes. 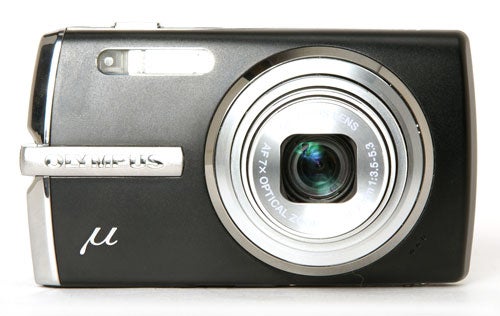 The mju 1010 is an impressive camera straight out of the box. It has a slim all-aluminium body with some nice styling touches to its chrome detailing. My review sample is an attractive matt black and grey two-tone finish, but it is also available in blue or silver. Ultra-compact lenses with longer zoom ranges are becoming more popular, and the mju 1010 is equipped with an impressive f/3.5 – 5.3 7x zoom lens that folds very flat, although not quite as flush to the body as the Ricoh R8. It is quite a compact camera, measuring 99 x 56.3 x 25.2 mm including the lens, and quite light too, weighing only 135g minus the battery. Incidentally, does anyone know why camera weights are always quoted minus the battery? It’s not like you can use the camera without the battery, so why not include it? The mju 1010 uses a fairly chunky 925mAh Li-ion battery that weighs 20g, for a total of 155g.

The mju series has been around for a while now, so the 1010 is a design that has evolved over time and consequently fits its intended use very well. The long thin wedge shape of the body is nice and easy to hold, and the detail on front gives it a bit of extra finger grip. The layout of the controls on the rear panel leaves plenty of room to grip the camera, with the small mode dial providing a thumb rest. The control layout is concise and straightforward, and the buttons and D-pad are internally illuminated, making them much easier to operate in the dark. I really don’t know why more manufacturers don’t do this. The zoom control is a rocker switch, but it least it is a quick and responsive one. 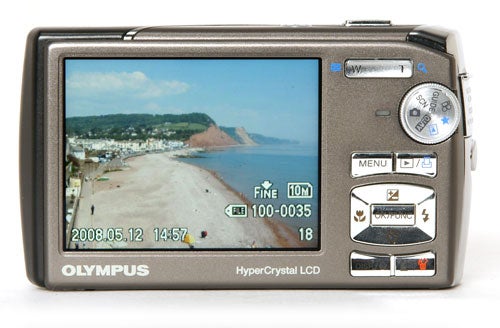 Like the rest of the mju series the 1010 is basically a point-and-shoot snapshot camera, and its limited list features reflects this, for example there is no manual white balance option. The main shooting modes are Auto, in which all but the most basic menu functions are disabled, Program mode which at least offers manual selection of some functions such as white balance, ISO setting, metering mode, autofocus mode and continuous shooting, and Scene mode which has 22 programs for particular shooting situations.


The main menu is as awful as ever, with various options scattered pointlessly around numerous sub-menus, making things like changing the metering mode needlessly complicated. Fortunately there is also a sidebar function menu which provides quick access to white balance, ISO, drive mode, picture quality and metering mode. It’s just a pity that it doesn’t include AF mode since this is another often-used option.


One noteworthy feature is the Shadow Adjustment function, which brightens darker areas of the image, simulating increased dynamic range. It increases the sensor gain by about 2EV in the darkest areas, which does cause some problems with image noise, especially at higher ISO settings. This feature can be applied while shooting, or afterwards in playback mode. 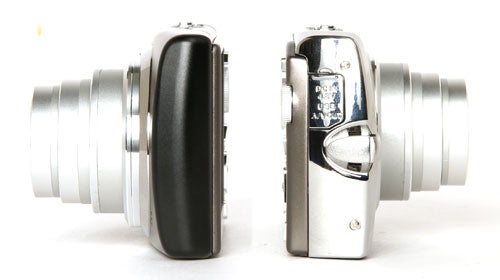 The mju 1010 also includes optical image stabilisation, a useful feature on a camera with a longer-than-average zoom range. It is quite an effective system, providing around two stops of extra shooting stability, but as is often the case with optical systems it’s better at compensating for longer focal lengths than it is at very low shutter speeds.


The movie mode is surprisingly limited, with the maximum quality 640 x 480, 30fps mode being restricted to 10-second clips. Longer 29-minute recordings can be made, but only in the rather poor 320 x 240 15fps mode.

The camera’s performance is pretty brisk. It starts up in well under two seconds and shuts down again just as quickly. In single-shot mode its shot-to-shot time is approximately 1.8 seconds, while in continuous mode it can maintain 1.2 seconds per shot, which may not sound fast but it does adjust focus for each shot, so it works well with moving subjects. There is also a high-speed continuous mode that can shoot at approximately five frames a second, although this is limited to a resolution of three megapixels. Interestingly the specification sheet for the camera states that the continuous shooting modes are limited to seven and eleven frames respectively, but in fact I found that using a faster Type H xD-Picture card meant that the camera would maintain its maximum shooting speed indefinitely. I’m surprised Olympus doesn’t mention this. 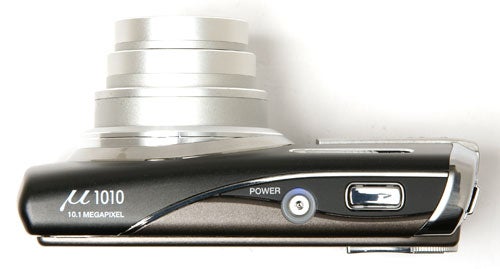 The autofocus system is very quick and reliable in good light, and works well even in a poorly lit room. However once the light drops to nightclub levels it doesn’t cope well, failing to focus at all most of the time. Surprisingly for a premium camera there is no AF assist lamp, and this rather poor performance is going to limit the 1010’s appeal as a social snapshot camera. Another low-light problem is the flash, which is poorly metered and produces very inconsistent results.


Image quality is mostly very good. The lens performs well, with no wide-angle barrel distortion or chromatic aberration at all, although it’s not the sharpest I’ve ever seen. Images have an overall softness that robs them of the kind of fine detail that we’ve come to expect from 10MP compacts. There is also some slight additional blurring in the far corners of the frame, but no worse than may other comparable models. Colour rendition and exposure metering are very good, although the limited dynamic range does result in burned-out highlights on sunny days. Noise control is also good, with acceptable noise levels at 400 ISO, and printable results even at 800 ISO. At the maximum 1600 ISO noise is very visible, but even at this setting colour distortion is fairly minimal. 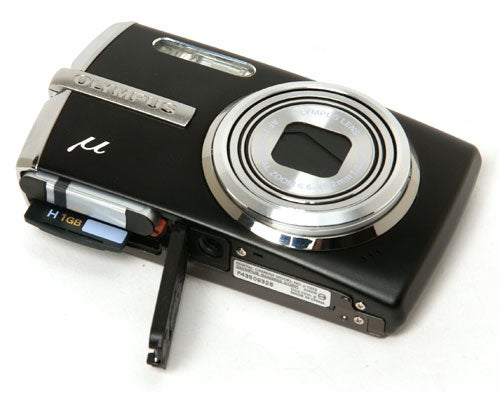 Whatever the marketing logic behind launching two such similar models, there’s no question that the mju 1010 and 1020 are good quality cameras, offering superior zoom range, great handling and decent performance, all in a stylish weather-resistant body. Image quality is generally good in most situations, but poor low light performance and an inferior video mode will limit their appeal as social snapshot cameras. 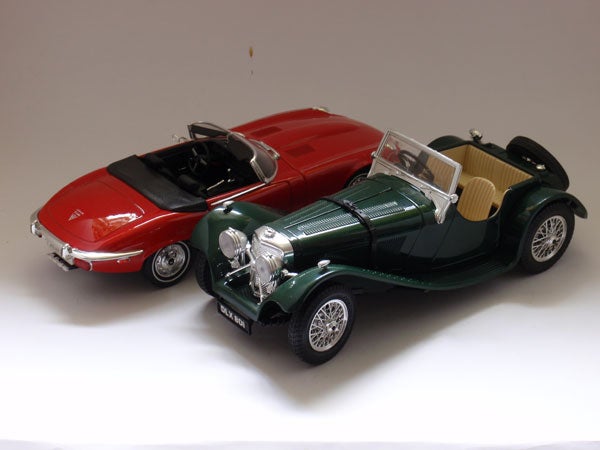 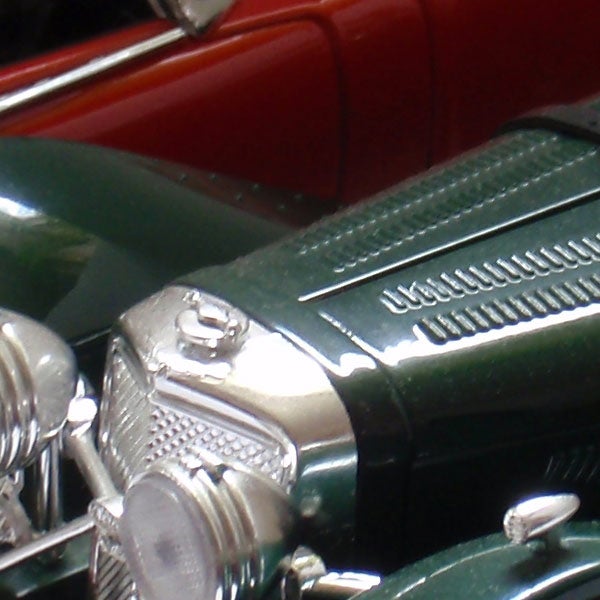 At 80 ISO the image is noise free, but it could be sharper. 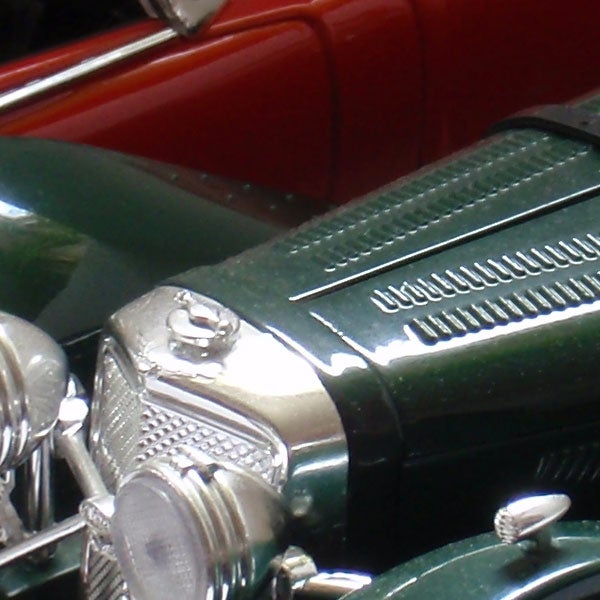 As usual, no real difference at 100 ISO. 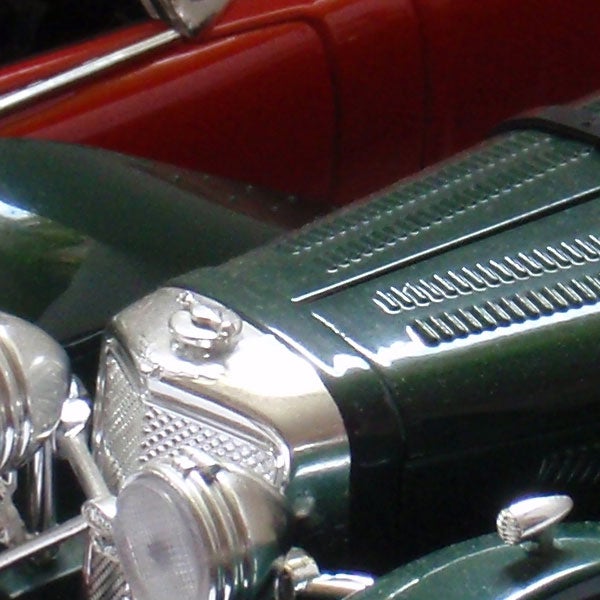 There is a slight speckling of noise at 200 ISO, but not enough to cause a problem. 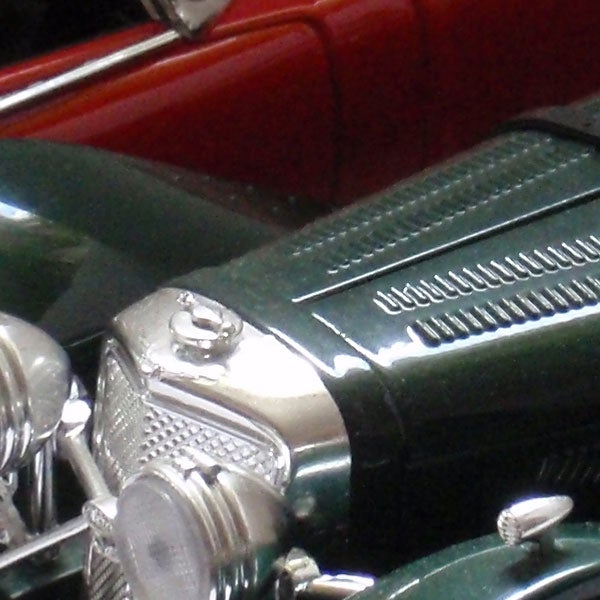 The results are still acceptable at 400 ISO, although there is some colour mottling. 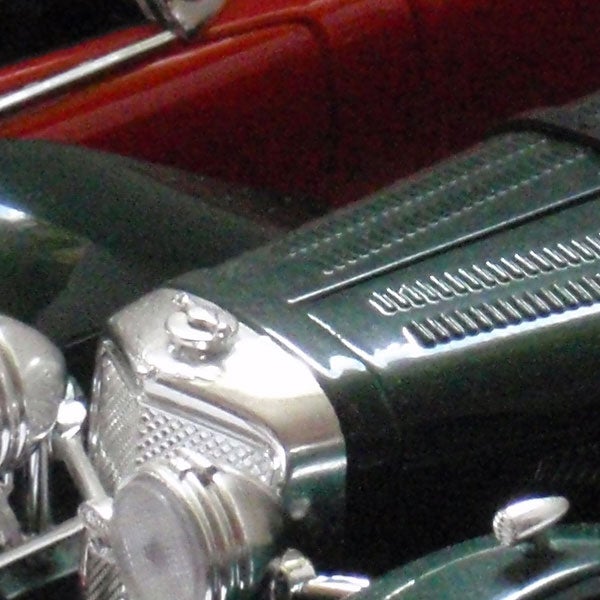 At 800 ISO the image is printable at small size, but there is a lot of visible noise. 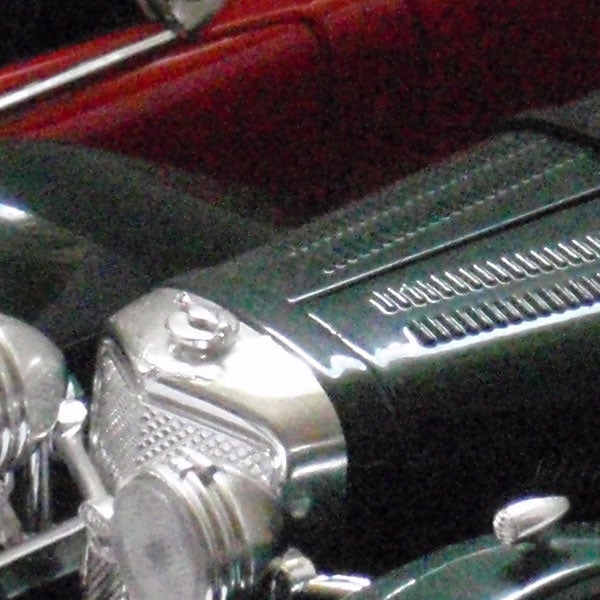 The image is very noisy at the maximum 1600 ISO, but overall colour balance is still pretty good. 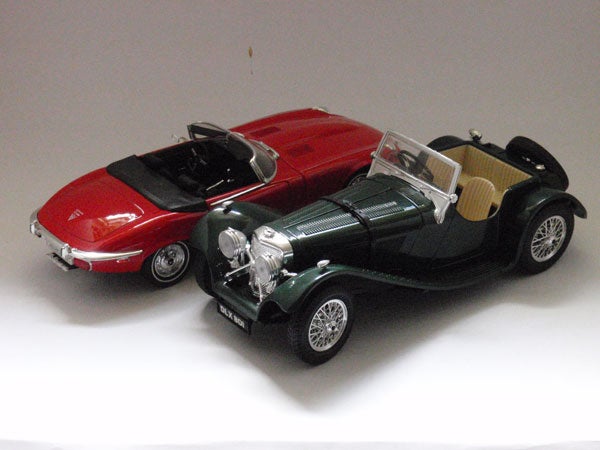 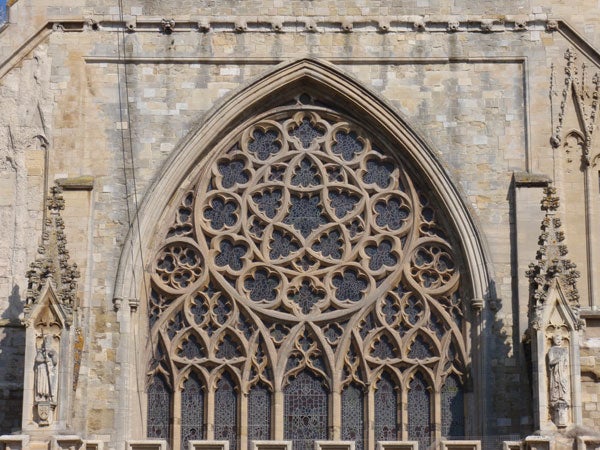 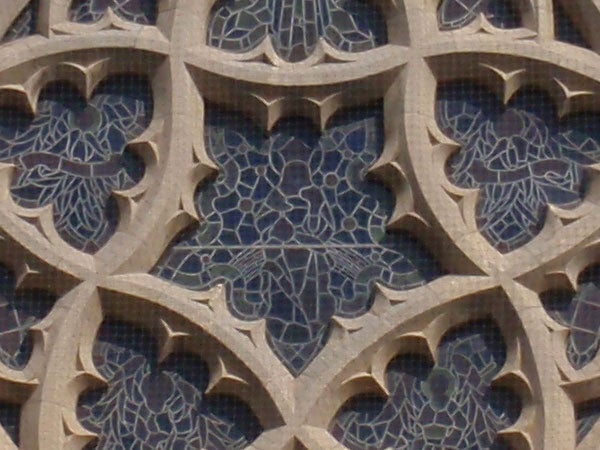 The image is a bit soft and lacks the sort of fine detail normally seen from 10MP cameras. 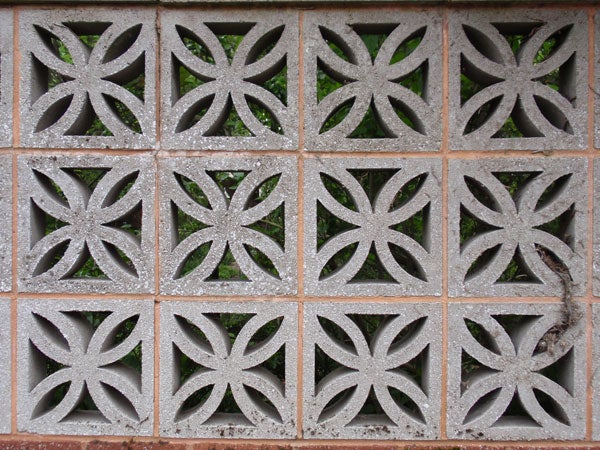 The lens produces no barrel distortion at wide angle, quite remarkable considering its long zoom range and compact size. 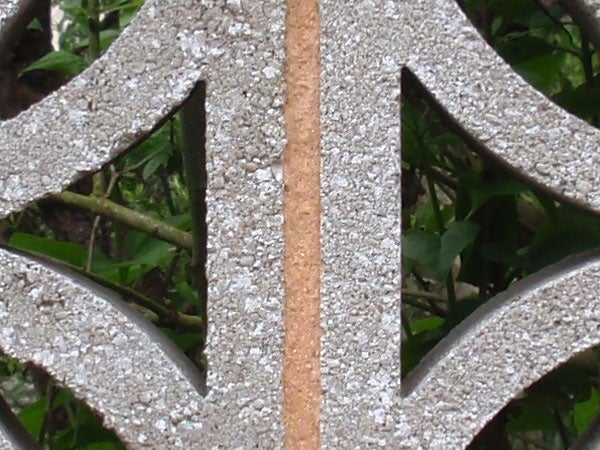 Centre sharpness is not as good as some rival models. 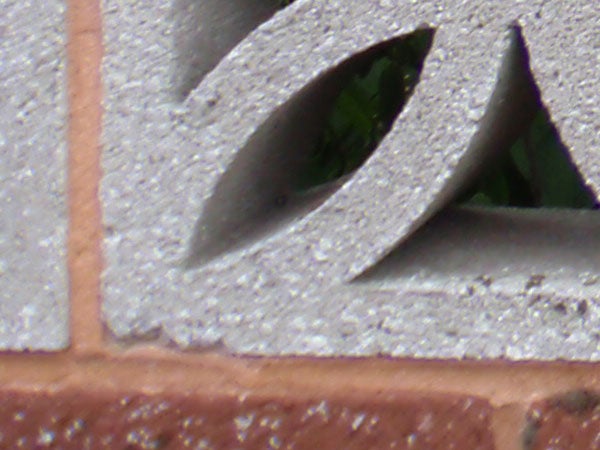 There is some blurring in the corners, but at least there’s no chromatic aberration. 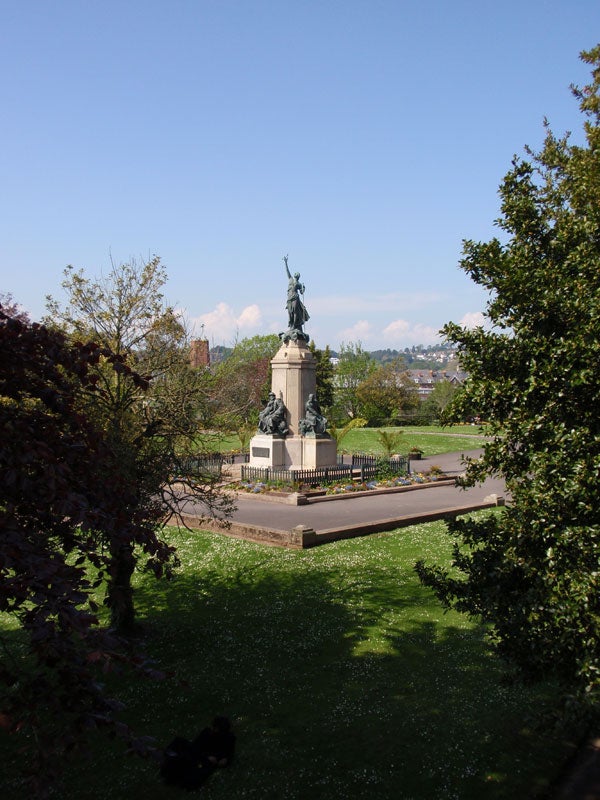 The wide angle end of the zoom range is equivalent to 37mm, about average for a pocket compact. 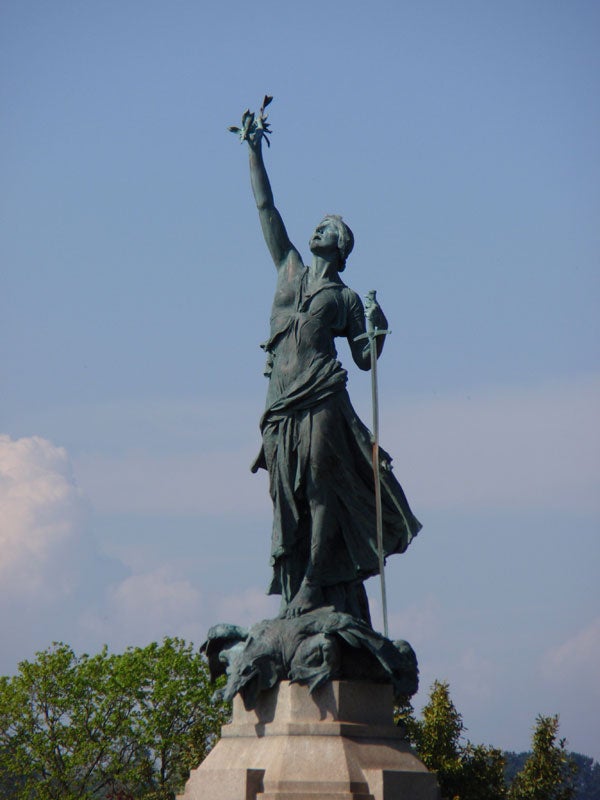 The mju 1010 has a 7x optical zoom range, with the telephoto end equivalent to 260mm, good for zooming in on details in a scene. 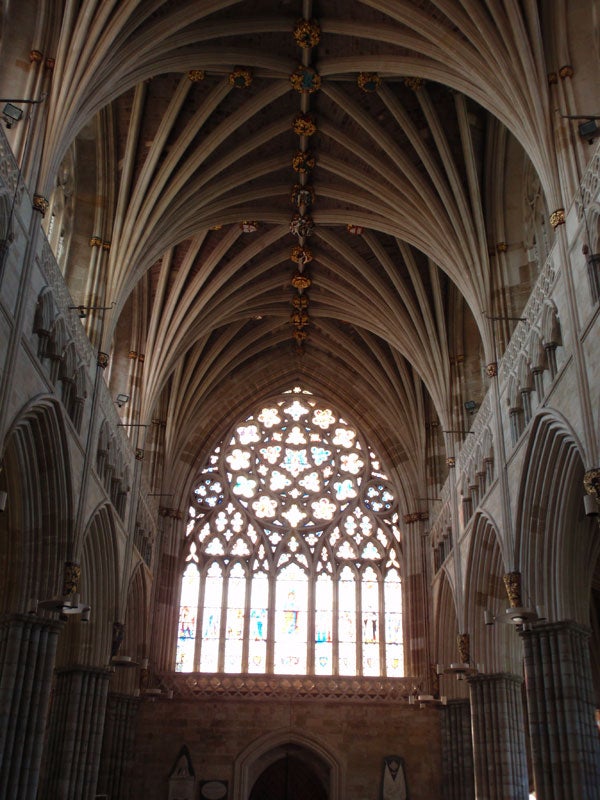 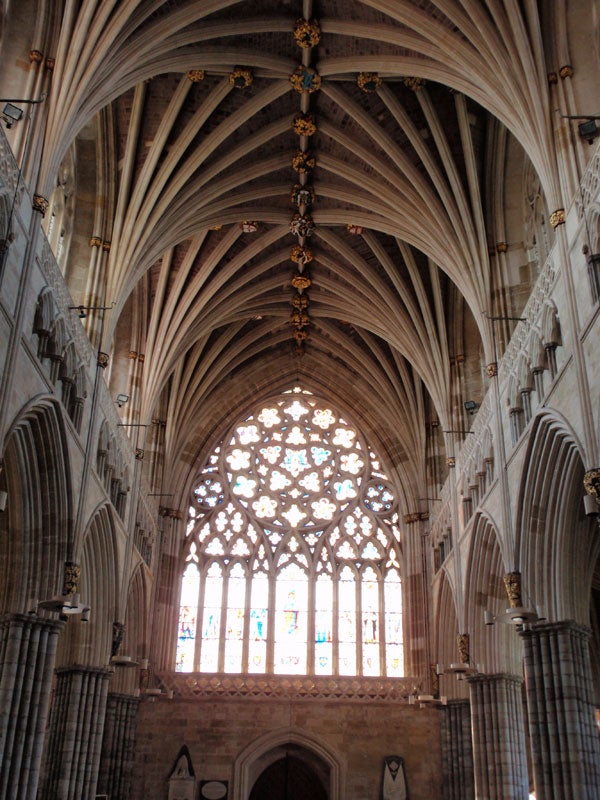 This is the same shot, but with the Shadow Adjustment option applied in playback mode. 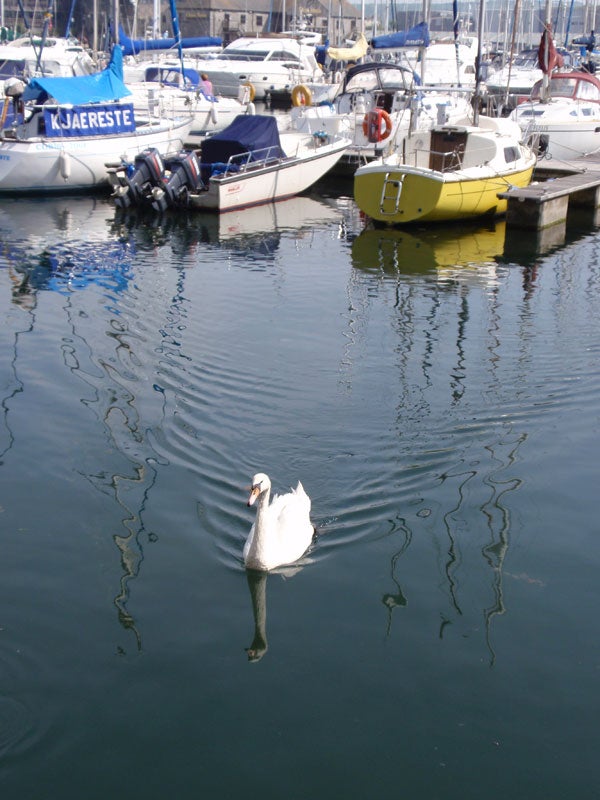 Overall exposure is good, but again the highlights are burned out. 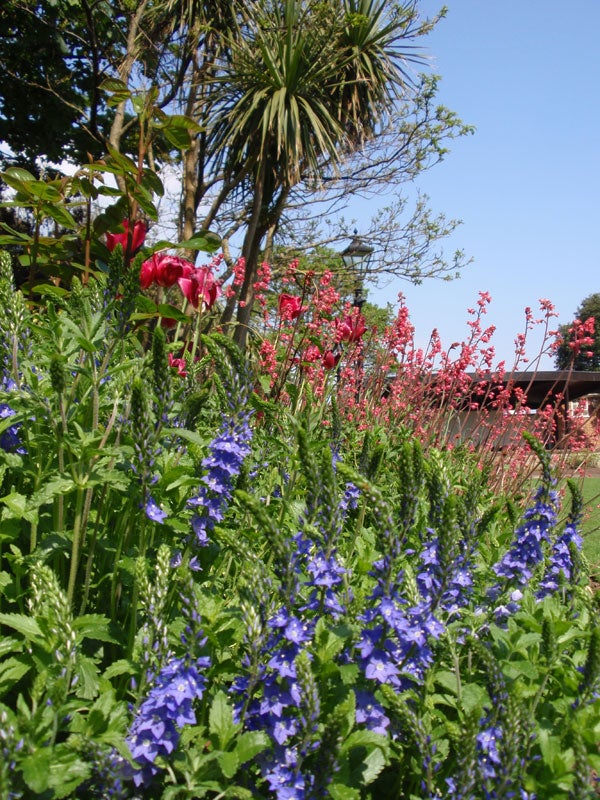 Colour rendition is excellent, but there are no colour adjustment options.