As well as its premium line of mju (µ) weatherproof compacts and excellent E-series digital SLRs, Olympus makes a more modest line of compact snapshot cameras, the FE series. It’s been a while since I last took a look at any of the FE cameras. In fact the last one I reviewed was the FE-150 almost exactly a year ago. To say I was not terribly impressed by it would be an understatement; it received one of the lowest review scores I’ve ever given, with a total of eight out of a possible forty marks, and only two out of ten overall. I found major problems with its performance, design, construction, lack of features and shoddy image quality. Still, a year is a long time in the digital camera industry and the FE-150 is long gone, so today I’m taking a look at the FE-230, one of the latest cameras in the range, and hopefully something of an improvement. 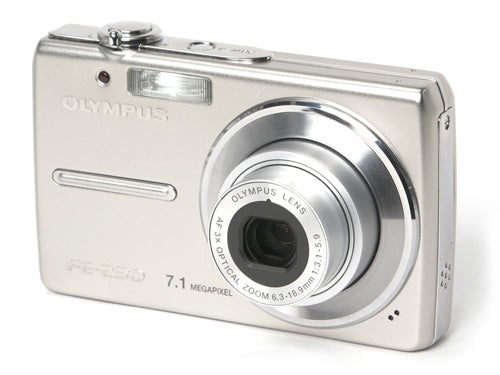 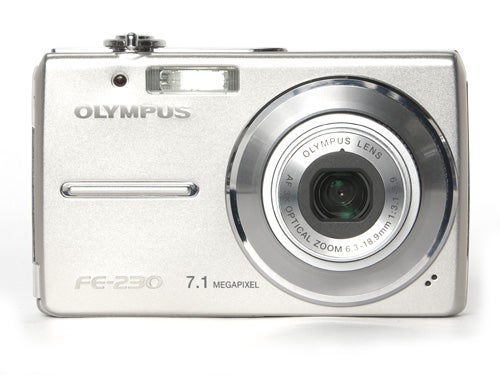 It’s a pretty little thing too. In overall style it is, not surprisingly, very similar to most of the other cameras in the list above, most notably the Pentax M30. It is very slim, measuring just 19.1mm across the thickest part of the body, and amazingly light, weighing only 105g without the Li-ion battery, and not much more with it. Despite this feather-like weight it is surprisingly solidly made, with a good strong stainless-steel case which resists marks and scratches, and solidly mounted controls. The card/battery hatch is plastic and a bit flimsy, and the tripod bush is also plastic, but on the whole the build quality is very good. Handling is also good for an ultra-compact. The 2.5-in screen leaves plenty of room on the rear panel, and the raised mode dial doubles as a thumb grip, making the cameras nice and secure to hold. The FE-150’s horrible rocker switch zoom control has been replaced with a rotary bezel around the shutter button, which is a lot more responsive, and the large square D-pad and main mode dial are also nice and easy to operate. The zoom is stepped, but with eleven steps between wide and telephoto it offers a lot of scope for precise framing.

The FE-230 is designed expressly as a simple point-and-shoot compact, and as such it has only the barest minimum of features. Like previous FE-series models it is auto-everything, and has no manually adjustable ISO setting, white balance or colour options, and obviously no manual exposure controls. It has four special program modes, including night scene, portrait, landscape and a “Digital Image Stabilisation” mode which, as most such modes do, simply sets a higher ISO to provide a faster shutter speed. As well as these it has 13 fairly typical scene modes, and a VGA 30fps movie mode. The only other options are a 12-second self-timer, +/- 2EV exposure compensation and four flash modes. 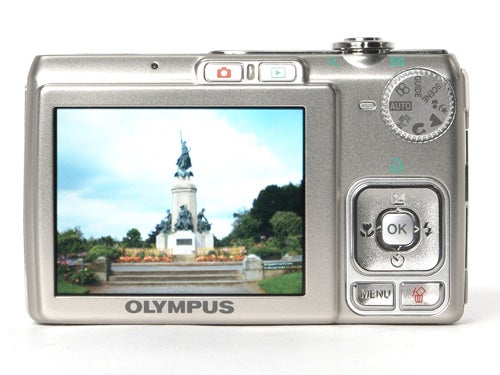 The menus system is, for once, not horribly confusing because it has virtually nothing on it beyond picture size and quality options, a panorama mode and the usual basic camera setup functions such as date, language and card formatting. The FE-230 is a very simple camera, but it does also include a ‘guide’ mode, a built-in manual with handy tips on taking better pictures. As such it would obviously suit a beginner who has never owned or used a digital camera before, although more experienced users will probably find the tips that appear every time the camera is switched on or the mode is changed, somewhat irritating after a while. 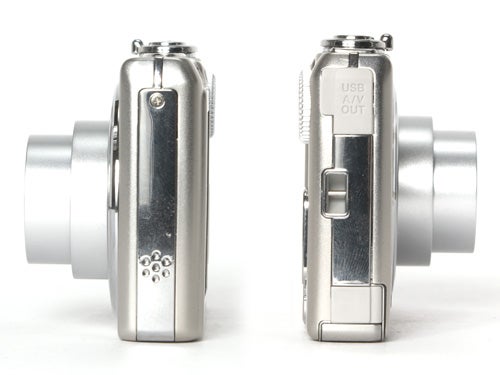 In terms of performance the FE-230 is unfortunately a bit on the slow side. It starts up in a little over two seconds, which is quick enough, but the shot-to-shot time in the Super High Quality (SHQ) mode is sluggish at over four seconds. It is a bit quicker (2.2 secs) in the more compressed HQ mode, but it’s still far from sparkling, and that’s about as fast as it goes because the camera has no continuous shooting mode.

The AF system is also quite slow, taking over a second to lock on even in good light and even longer when light levels drop. In low light conditions it copes reasonably well up to a point, and will generally focus in any light you could comfortably read by, but it has no AF illuminator so focusing in the dark is not an option, which will limit it’s usefulness as a social snapshot camera. Flash performance is good though, providing total frame coverage with an effective range of 3.8m at wide angle, which is slightly above average for a camera of this type. 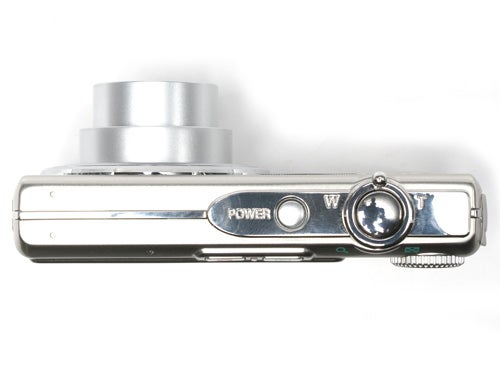 In terms of picture quality the FE-230 has its good points and its bad points. On the positive side exposure and colour reproduction are excellent, coping well with a range of lighting conditions including strong backlighting, and the level of fine detail is very good for a 7.1MP camera, at least in the centre of the frame. The 3.6MB average size of the SHQ files shows very low compression, and indeed there are no visible compression artefacts. Image noise is also reasonably well controlled. The automatic ISO seems to favour a setting of 50 for well-lit outdoor shots, which produces nice noise-free pictures. At lower light levels the ISO number rises, and although it has a stated maximum of 1250 it seems to not go higher than 500 ISO for flash-free indoor shots, and at this speed the image quality is reasonably good, although there is some noise visible. However the automatic white balance doesn’t cope at all well with artificial light sources, producing nasty colour casts on any shots lit with tungsten or fluorescent light, so you’ll want to keep the flash on auto in these situations. 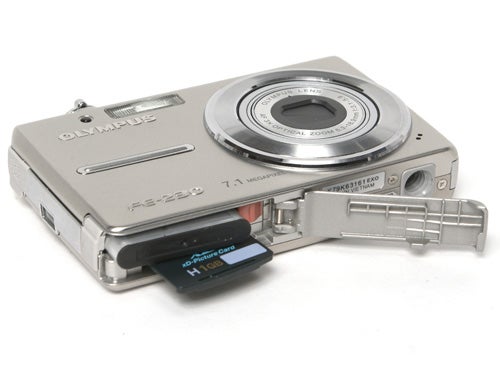 The camera’s real Achilles’ heel is its lens, which produces significant barrel distortion and corner blurring at wide angle, and at medium focal lengths produces very noticeable pincushion distortion, which is where the picture appears pinched in towards the middle of the frame. This is baffling, because Olympus can make very good lenses, such as the outstanding Zuiko lenses for its DSLRs, and it’s not like 3x compact zoom lenses are a new frontier of technology. It’s just that the one on the FE-230 isn’t very good. This is a shame, because with a better lens – and about £20 off the asking price – the FE-230 would be an ideal starter camera.

Although a big improvement on some earlier FE models, the Olympus FE-230 is still far from perfect. Build quality, design and handling are very good, and the all-automatic operation is extremely easy to use for the novice or technophobe. Image quality is also reasonably good under most conditions, but the poor quality lens, sluggish performance and limited low light ability mean that there are other cameras with similar specifications that are a better choice.

”Over the next few pages we show a range of test shots. On this page the full size image at the minimum ISO setting has been reduced to let you see the full image, and below that a series of full resolution crops have taken from original images at a range of ISO settings to show the overall image quality. Because the FE-230 has only automatic ISO, there are only two images presented here.” 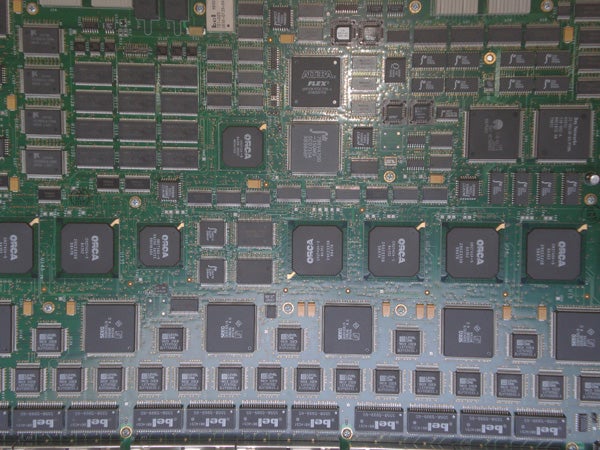 This shot was taken indoors using diffuse daylight, at a moderate zoom setting. The pincushion distortion is very noticeable; the rows of chips on this circuit board should be straight and parallel. 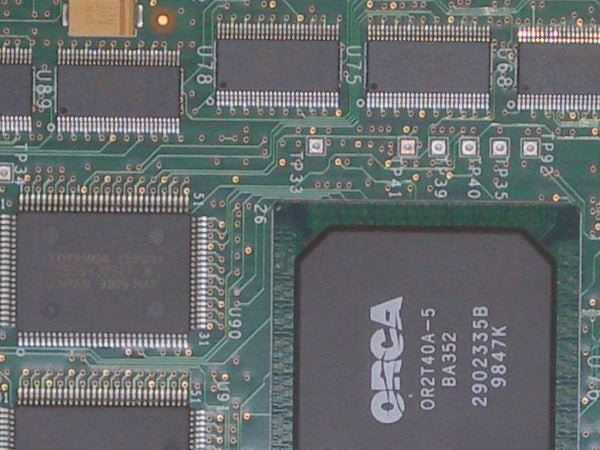 At the automatically-set 125 ISO the image is clean and sharp. 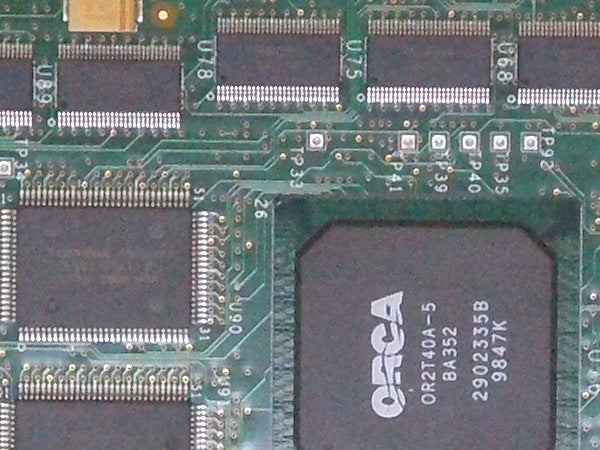 Setting the camera to the anti-blur “DIS” mode increases the ISO setting by a couple of stops, with a maximum of 1250. For this shot the camera has selected 500 ISO. There is some noise visible, and some fine detail has been lost. 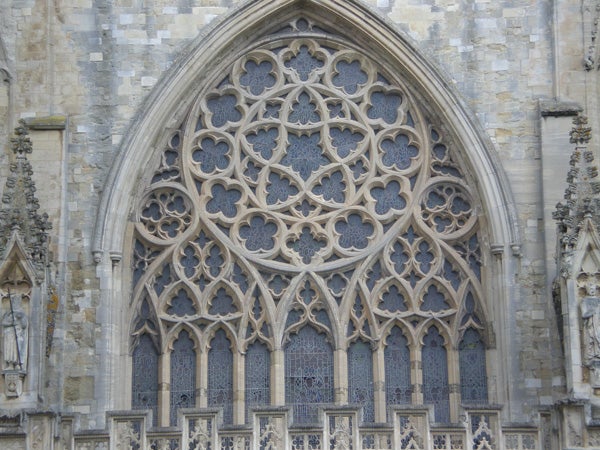 Here’s the same boring shot of Exeter Cathedral’s West Window for detail comparison. I take this same shot with every camera I test. Click on the image to see it full size or look at the 100 percent crop below. 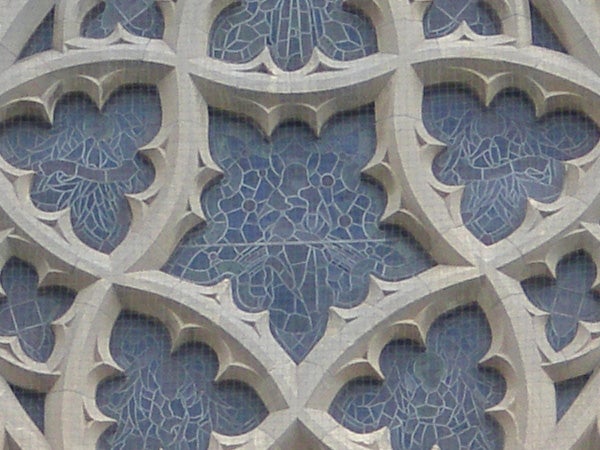 The level of detail isn’t bad for a 7.1MP camera. 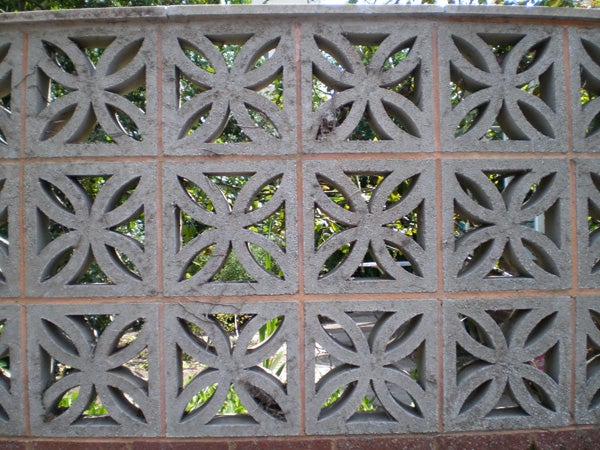 At the wide-angle end, the lens produces noticeable barrel distortion. 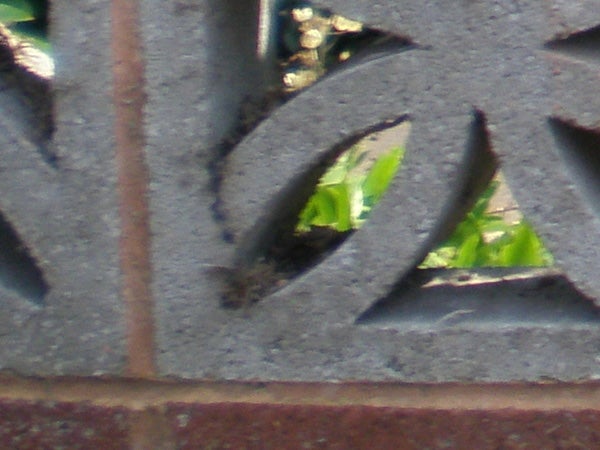 This corner crop from the above image shows the poor edge sharpness of the lens. 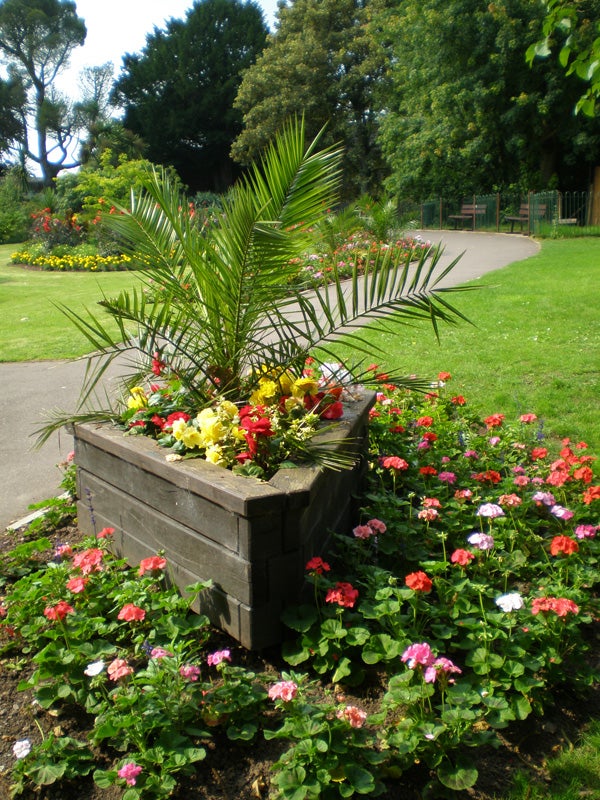 Colour reproduction is excellent, and the exposure is also very good. 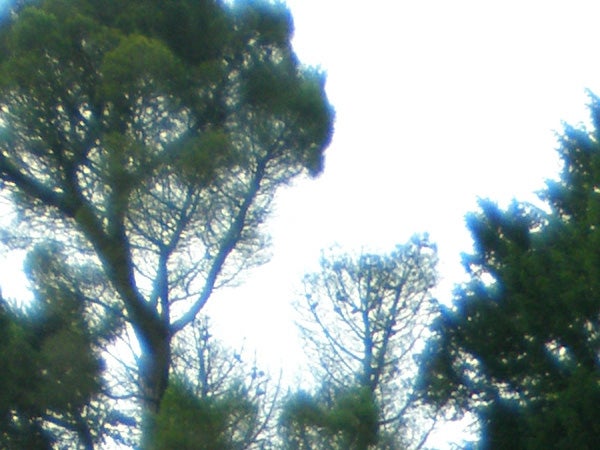 This corner crop from the top left of the above image shows some rather severe fringing around the highlights, as well as corner blurring. 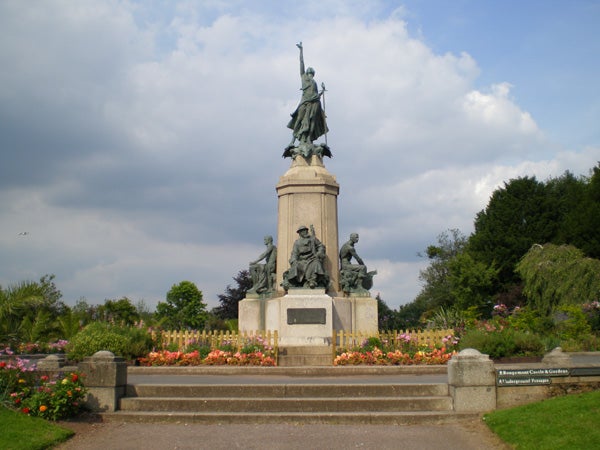 The wide-angle end of the zoom range is equivalent to 38mm, so you’ll have to stand back to fit anything large into the frame. Note also the barrel distortion curving the steps. 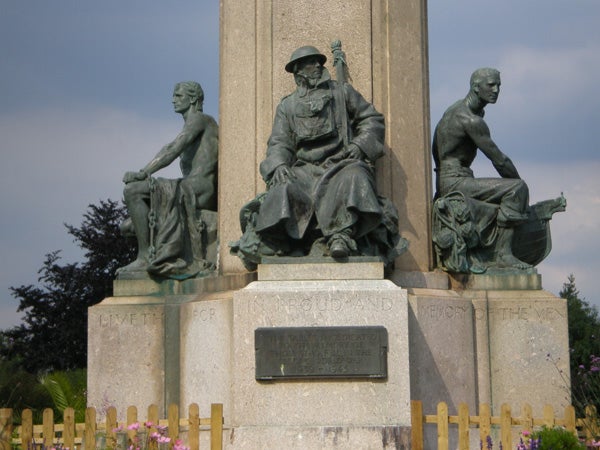