Following on from last week’s review of the Nikon L4, this week I’ve got another budget camera to review, the Olympus FE-150. Announced at the end of January this year, the FE-150 and its six megapixel sibling the FE-160 are intended for complete beginners, and are designed to be extremely simple to use, while still providing very high quality pictures. The FE-150 has a list price of £160, but is widely available for around £130.


In terms of physical appearance, the FE-150 is unremarkable. It has a square-cornered shape, and its aluminium body is finished in a brushed metal texture with chrome details. Measuring 90 x 55 x 24.5mm and weighing about 150g with the battery it’s just about small enough to go in a shirt pocket. Build quality is adequate, but the body metal feels very thin and flimsy, and would probably dent or scratch easily.


Despite its rather blocky shape the camera is fairly easy to hold thanks to a small finger grip protrusion on the front and a textured thumb grip on the back. The main controls are well laid out and easy to find, although I personally found the shutter button to be far too sensitive.


The main external feature is the big 2.5-inch LCD monitor. With 230k pixels it is nice and sharp, and although it is quite reflective it is bright enough to use in daylight. 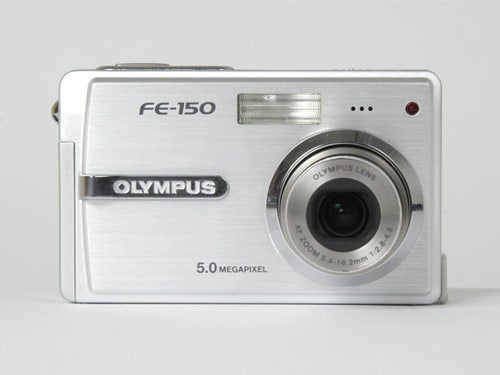 Due to the camera’s extreme simplicity, the external controls are very basic. There is a slider switch on the top plate to select between playback, movie mode and still shooting. I didn’t have any problem with this, but a couple of my friends who briefly tried the camera ended up accidentally shooting movies instead of taking photos.

The other main controls, for the flash mode (four options), exposure compensation, 10 second self-timer and macro focusing, are all secondary functions on the D-pad. The only other buttons are delete, quick print and the menu button.


The menu itself is equally simple, with only four image quality options, four scene modes (portrait, landscape, night scene and self portrait), a limited range of set up options and a panorama mode, although despite a thorough examination of both the 20 English pages in the basic manual and the 73-page CD-ROM PDF-format advanced manual I was unable to get this option to work. The manual said that an xD card was required, but even with a 128MB card installed and formatted the panorama mode remained unavailable. 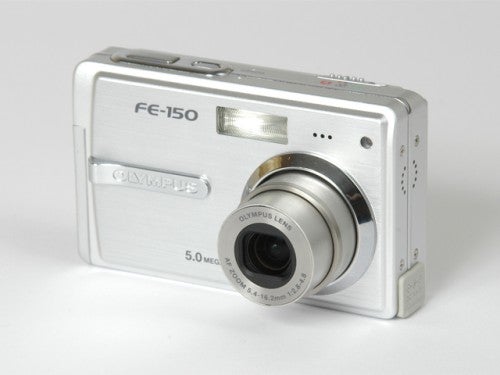 Like the Nikon L4, the FE-150 offers no manual control over ISO setting. The camera appears to automatically set its ISO to either 64, 125 or 160 depending on the exposure, but there is an “image stabilization” option in the Scene Mode menu which increases the maximum to 320 ISO, providing a slightly faster shutter speed to counteract camera shake.


The camera also has no manual control of white balance, however the automatic system appears to work well under most normal circumstances.


The movie mode is one of the weakest I’ve seen in a long time. In the laughably titled High Quality mode it can manage only 320 x 240 pixel resolution at a jerky 15 frames a second. Most other cameras in this class can manage 640 x 480 at 30fps. The standard quality mode offers only 160 x 120 at 15fps; most modern mobile phones can do better than that.

The FE-150’s performance is also somewhat below par. It starts up in around three seconds, which is a little slow but not too bad, however the shot-to-shot time is appalling. The camera has no continuous shooting mode, and it’s easy to see why. In good light and shooting a high-contrast subject, the autofocus system takes three seconds to lock on, over twice as long as most other modern compact cameras, and then when you take a shot even in the lowest quality setting it takes four seconds for the camera to process it and save it to memory before you can take another one. That’s a shot-to-shot time of around seven seconds. I’ve got an old Ricoh RDC-5000 from 1999 that’s quicker than that.


So far the FE-150 isn’t looking too good, with a very limited list of features, one of which didn’t work, questionable build quality, a very poor movie mode and performance that would have seemed sluggish seven years ago. Perhaps image quality can save the day? 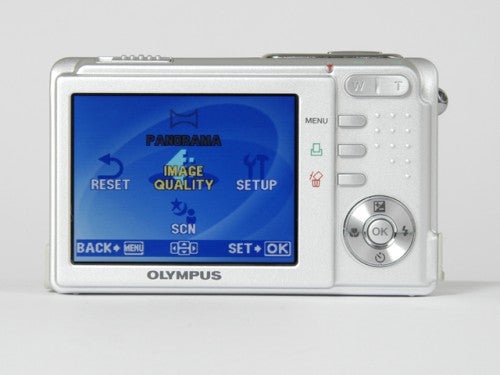 Or perhaps it can’t. Although five megapixel resolution should be more than adequate for quality snapshot photography, the FE-150 still manages to be below average. In SHQ mode, image files are around 2.5MB and look reasonably good, and in that setting a 128MB xD card provides enough space for 35 shots. In the default HQ mode the same card can hold 102 images, but with a file size of around 900KB they are very compressed, and are full of visible compression artefacts, destroying much of the fine detail.


Incredibly for a camera with a maximum automatic ISO setting of only 320, image noise is also a problem, with shots taken above 160 ISO showing extensive colour speckling in darker areas. 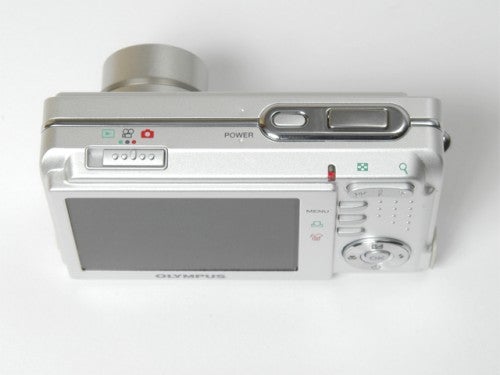 Colour rendition is extremely shaky, with skin tones looking red, and bright reds looking orange. Pictures look over-processed, as though they’d been burred and then sharpened a few times, probably part of some half-assed noise reduction system. There is also purple fringing on highlights, as well as some evidence of chromatic aberration. About the only nice thing I can find to say about it is that the lens performs well at wide angle, with a minimum of distortion. Overall exposure is also reasonably good, although the limited dynamic range of the CCD means burned out highlights and reduced shadow detail.


Flash range and metering are good, which is important on a camera that will probably be used mostly for party snapshots. It is easily capable of illuminating subjects up to five metres away, however this is spoiled by the total inability of the AF system to function in low light, even in a well-lit restaurant. Unfortunately, the camera will still take a photo even if the AF hasn’t locked on, so nearly all the flash shots I took were out of focus. There were also major issues with image noise due to the automatically increased ISO setting when shooting in low light.


If the FE-150 didn’t have the Olympus badge on it, I’d have thought it was from one of the less reputable of the no-brand Chinese importers. For a major name in the photographic industry it is a shockingly bad camera, with very poor image quality, dismal low light performance, virtually no features or options (one of which didn’t even work), the worst movie mode I’ve seen in a year and performance that can only be summarised as crap. There are much better cameras available for the same money, so buy one of them instead. 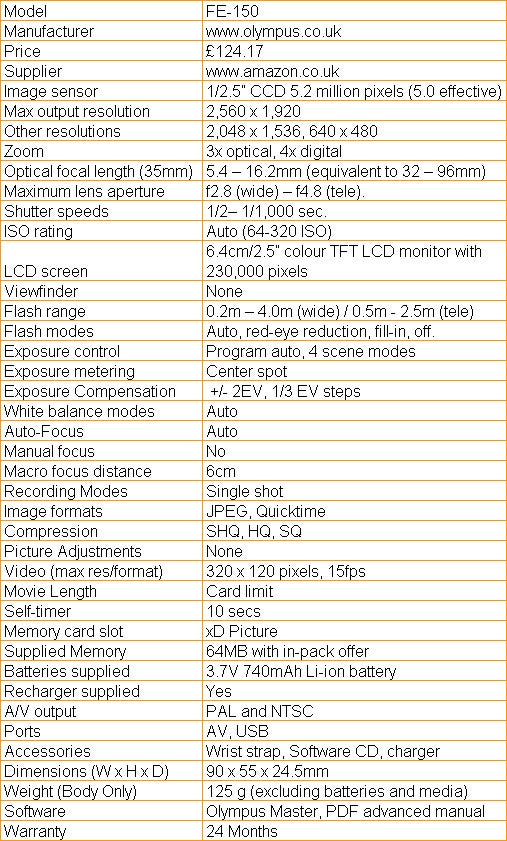 ”A range of test shots are shown over the following pages. Here, the full size image has been reduced for bandwidth purposes, and a crop taken from the original full resolution image has been placed below it in order for you to gain an appreciation of the overall quality. The following pages consist of resized images so that you can evaluate the overall exposure. For those with a dial-up connection, please be patient while the pages download.”

Note: There are only two ISO test shots this week, because the FE-150 has no manual ISO setting. Instead I have taken the same shot using standard and “image stabilisation” mode. 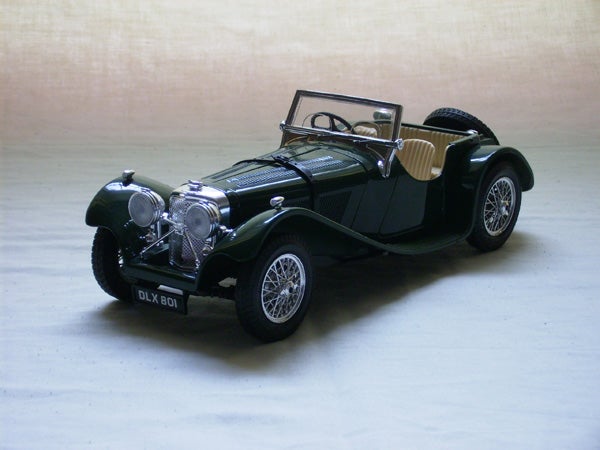 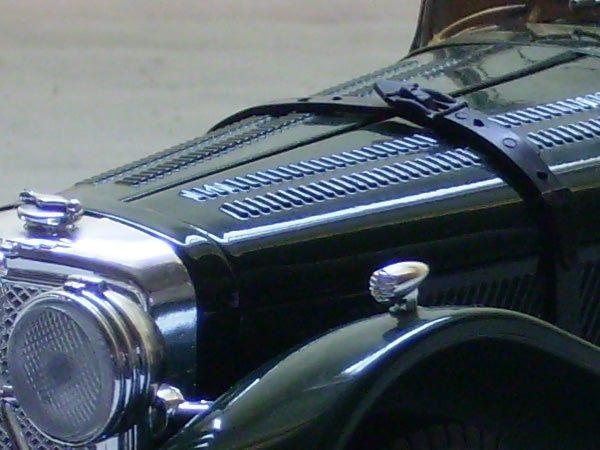 In standard mode the automatic ISO system selects a setting of 125 ISO for this shot. Image noise isn’t too bad, but there are purple fringes around the highlights and the AF system took six tries to lock on to it. 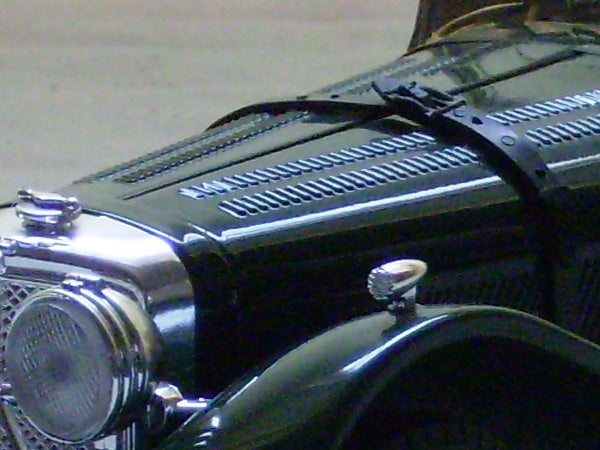 In “image stabilisation” mode, the camera increases the ISO to 320, giving a higher shutter speed to counteract shake. However the image has very bad colour speckling and lots of detail has been lost. 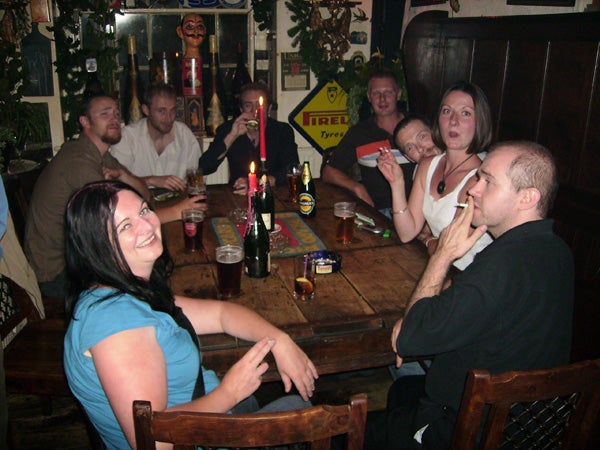 Although the flash coverage is very good, the AF system hasn’t focused in the slightly low light conditions, and the shot is blurred.

The wall is actually brilliant white, but the automatic white balance system thinks it should be light green, so who am I to argue?

…and here’s the telephoto end from the same spot.

The CCD has limited dynamic range, resulting in burned out highlights and loss of shadow detail.

Colour rendition is not so good. The bright reds in this shot look orange, and there is evidence of chromatic aberration toward the edges of the frame.

At least the lens has very little distortion at the wide angle end.