The tenth camera in Olympus’ Four Thirds system and the third in the 500 series, is the new E-520, a 10.0-megapixel model and an update to last year’s E-510. Featuring the same sensor resolution as the earlier model, the new camera sees a few tweaks to improve the performance and handling. 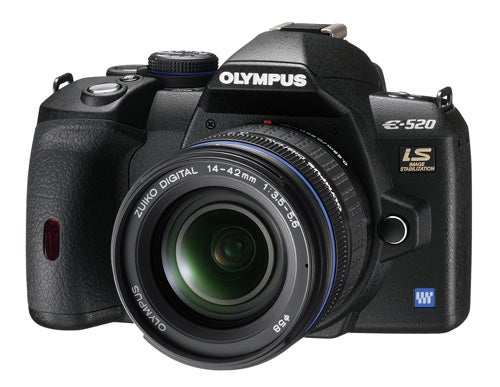 Like the other current models in the range, the new camera offers Live View, allowing you to preview and compose images on the LCD, which is itself enlarged to 2.7″. The autofocus has been improved to include both contrast detection AF as well as the phase difference detection system normally used in DSLRs, making focusing with Live View much quicker. A nice touch in the Image AF mode, is the way the mirror doesn’t move to the down position during shooting, so you maintain a clear view of the scene at all times, though the image dims slightly during exposure. In this mode the AF system uses the imaging sensor. There are two further AF mode options in the menu, Sensor AF which uses the sensor built into the pentaprism and Hybrid AF, using a combination of both sensors, depending on whether the shutter is depressed halfway or all the way down. The Imager AF is the default mode, and allows 11-point selection, while the other two only offer three AF points. Incorporated within the new AF sensor is a face detection AF, which recognises human faces within the frame and focuses on them automatically.


Another familiar technology within the camera is the moving-sensor type image stabilisation. This has now been supplemented with a third mode. Mode one offers continuous IS, mode two allows horizontal panning of the camera, while mode three now offers vertical panning, i.e. shooting in upright format while moving the camera left or right. While this may seem to be rather specialised, I found it useful on the first day with the camera at the Southend air show, while shooting the Red Arrows display team. There are many other useful applications too, 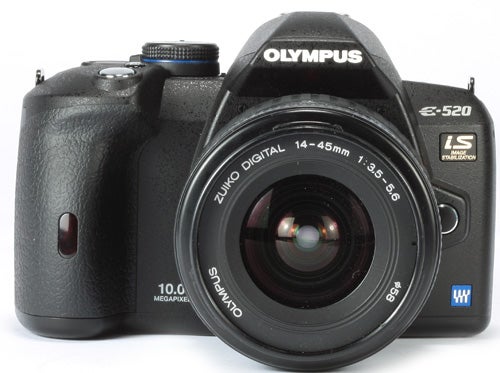 Olympus was the first company to address the problems of dust on the sensor and E-series cameras have always had dust reduction. The E-520 is no exception, with the Supersonic Wave Filter operating to dislodge any stray debris at start up, though unlike older models, it doesn’t show a graphic on the LCD, but a small blue LED on the top plate indicates its operation. This takes around a second to start the camera up, but is definitely a useful tool.

Metering options include the usual centre weighted, evaluative and spot metering options, alongside two further spot metering options, Highlight and Shadow. Although not new to Olympus, these two are extremely useful and worth pointing out. When used with dark or light subjects, the camera will automatically compensate for the subject to enable accurate exposures. Of course the camera also has exposure bracketing over 3 frames alongside white balance bracketing and flash bracketing. A supplemental mode is shadow adjustment, a dynamic range tool to compensate for backlit subjects or very contrasty scenes. 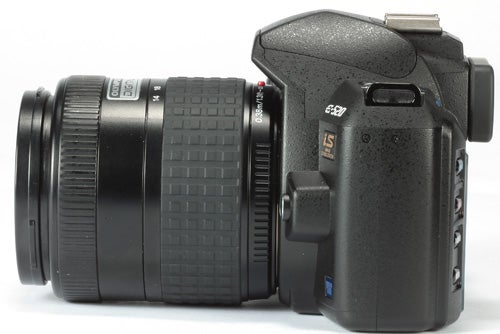 As for the exposure options, the camera has the full complement of Manual, Program AE, Shutter and Aperture Priority AE and auto as well as a wide range of scene modes. The most common scene modes are available from the top mode dial, with a further more specialised collection available in the Scene menu.


Olympus has maintained the cameras drive speed of 3.5fps, which allows 8 frames of Raw images, or around 20 fine JPEGs. There’s also the choice of 2 or 10 second self timer, whilst the anti-shock mode, ensures mirror vibration is eradicated when taking long exposures by leaving a gap of between 1 and 30 seconds in the time the mirror is lifted and the shutter is opened and closed. 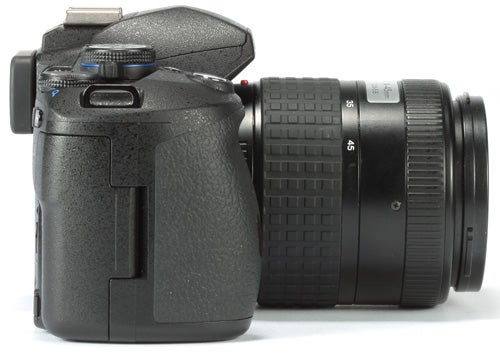 As well as the mandatory built-in flash the E-520 now accepts wireless flash units, Olympus new FL36R and FL50R, allowing communication between camera and off-camera flash. This is a nice addition and something Olympus has been a little slower to implement than some other manufacturers.

Olympus cameras are typically small and this is no exception, thought the right hand grip adds to its dimensions compared the 400 series of cameras. However I found it fits the hands well, and the glass reinforced plastic body is evenly balanced, The larger screen leaves slightly less room on the camera back than the E510, but there’s still enough thumb room, just, to not accidentally press the buttons on the back. 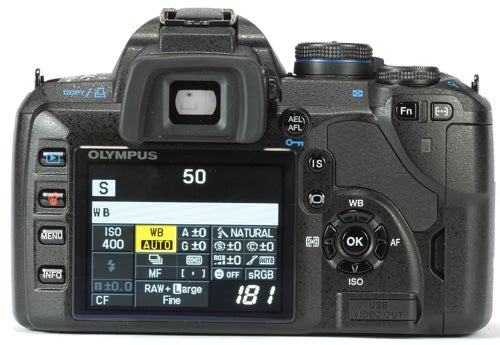 The layout is good, with a simple approach and all the buttons where they need to be, Other functions can be accessed via the main quick menu on the screen, by pressing the OK button, or in the main menu system, accessed via the Menu button,. Once the camera is set up, there’s very little reason to go to the main menu though, so you can concentrate on shooting. Not everyone gets on with this ‘Super Menu’, but I found that once you get used to it, it’s a really quick and convenient way of working. 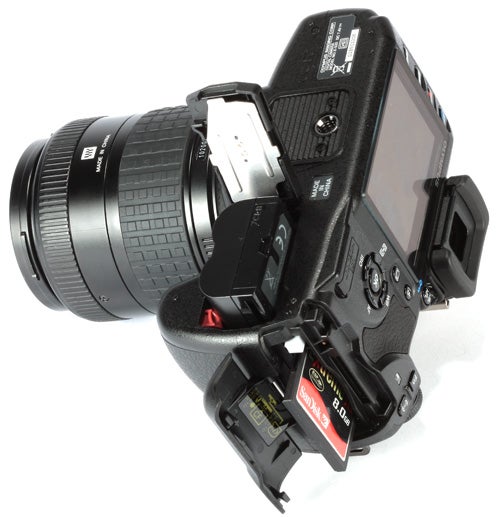 The command dial on the top plate is the only way to change aperture and shutter during shooting and in manual mode, the exposure compensation needs to be pressed to change aperture. This isn’t unusual, but I personally would like to see a second command dial, so there’s individual dials for shutter and aperture, A small point and I understand the reason it isn’t there – space and simplicity, but still.

Image quality is generally good. Olympus sensors and lenses work well together to optimise the sharpness and detail within images. Colour and exposure too are generally well maintained, though the camera does on occasions underexpose a little, but this has the benefit of maintaining highlight detail, especially in contrasty conditions.


Personally I like the tones within the images, but find adding a touch more contrast helps to elevate the images a bit more, there’s a softness to the tones that suits some subjects, but not all. There are controls to customise the contrast, saturation and so on within the menu, but they are generally less controllable than doing it yourself on the PC.


One of the best things about the camera is the noise control in the lower ISO range, though this deteriorates as the gain is raised. ISO 100 and 200 are fine, with nicely smooth tones, but by ISO 400, noise begins to show, especially in shadow areas. At ISO 800 it’s obtrusive and ISO 1600 is usable but noisy, and is a far cry from the low noise of Canon CMOS sensors. 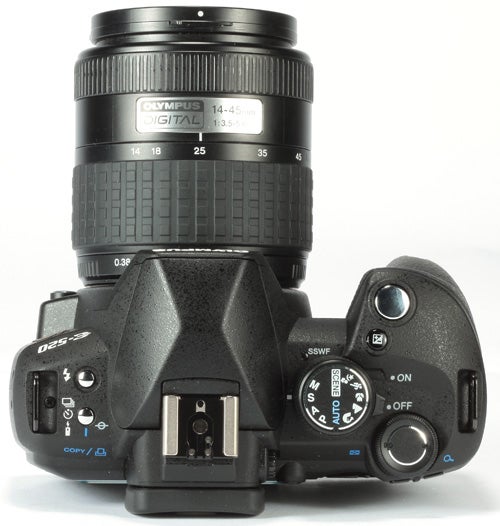 This isn’t a major upgrade by any means and wouldn’t warrant a switch from the E-510, but if you’re looking for a feature packed midrange DSLR, the E-520 is worth considering. The improvements, particularly the new image stabilisation mode and autofocus accuracy of Live Modes show that these important technologies are still being perfected, and the latest versions on the E-520 are pretty much as good as they get at the moment.


Olympus still has problems with noise though, and this is letting down the full potential of the four-thirds system. As the push towards higher resolution continues, and competitors offer 15MP at similar price points, Olympus is going to encounter further difficulties as the photosites get smaller potentially leading to more noise. This can be seen with all of its 10MP models, and the E-520 is no exception. 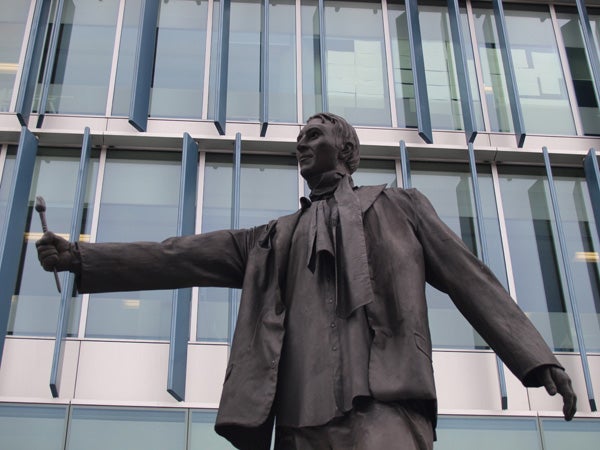 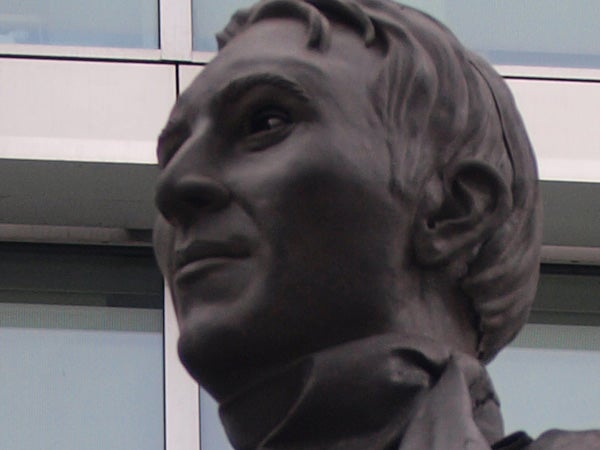 Smooth tones and no noise is visible at ISO 100. 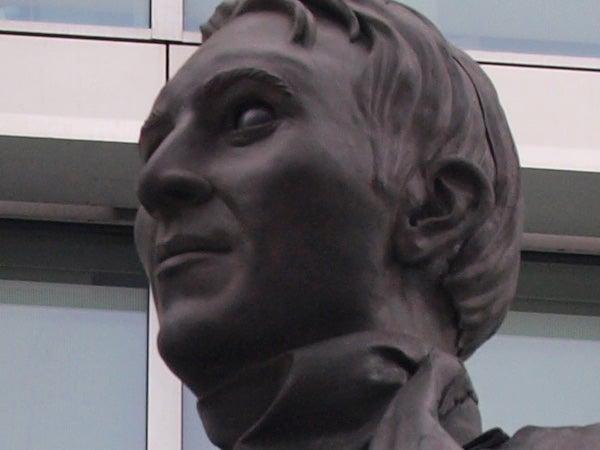 ISO 200 continues to hold it together. 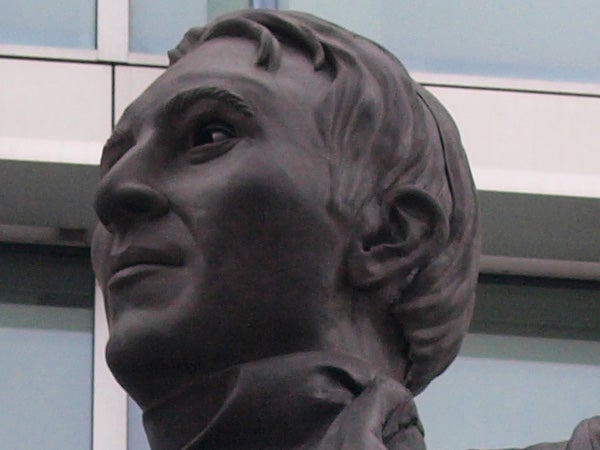 Noise is beginning to creep into shadow areas at ISO 400. 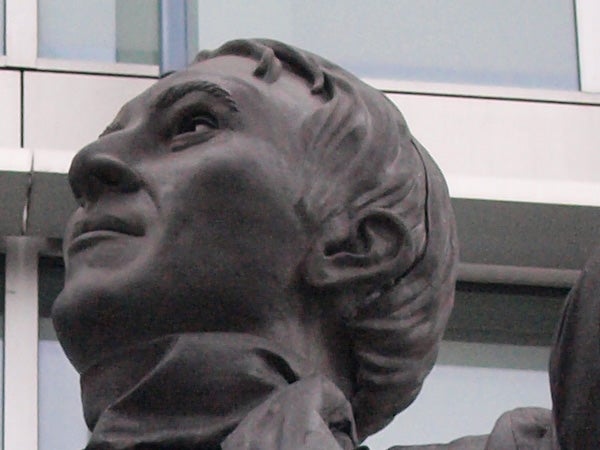 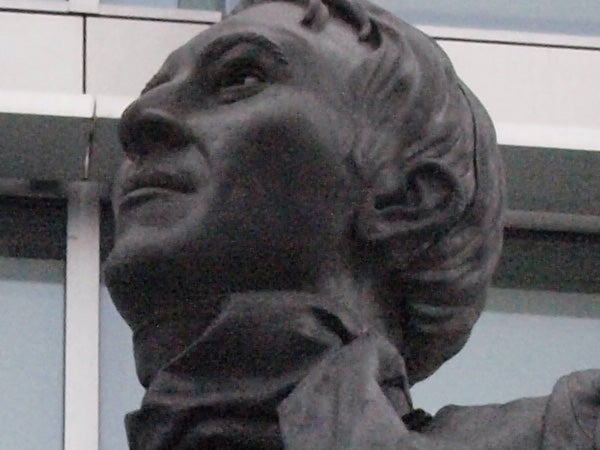 ISO 1600 noise is intrusive but images are usable. 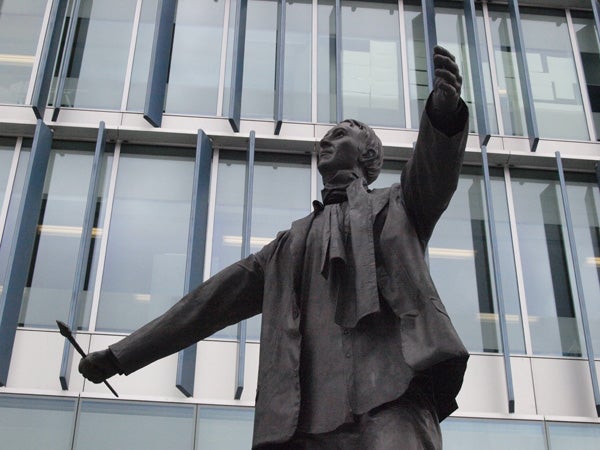 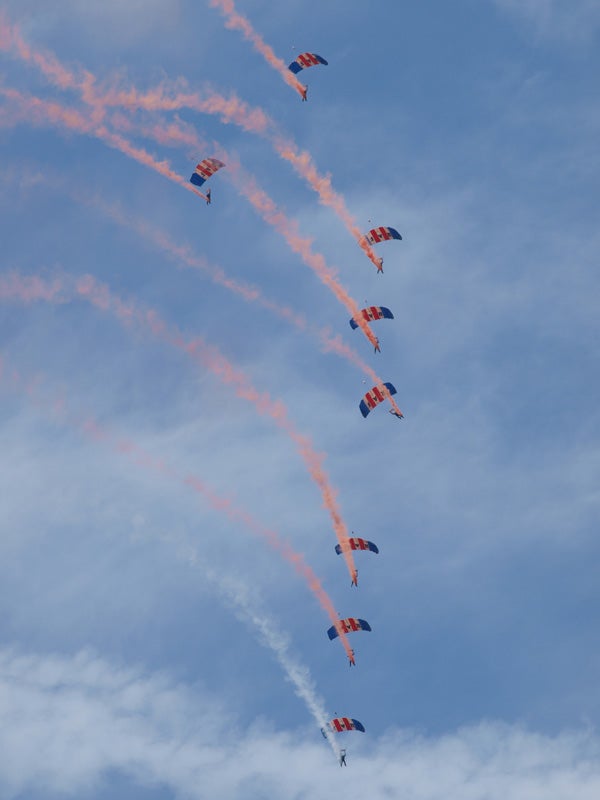 With the 50-200mm f/2.8 lens the level of sharpness and detail is impressive. Click to download the full-sized image (4.5MB) or see the crop below. 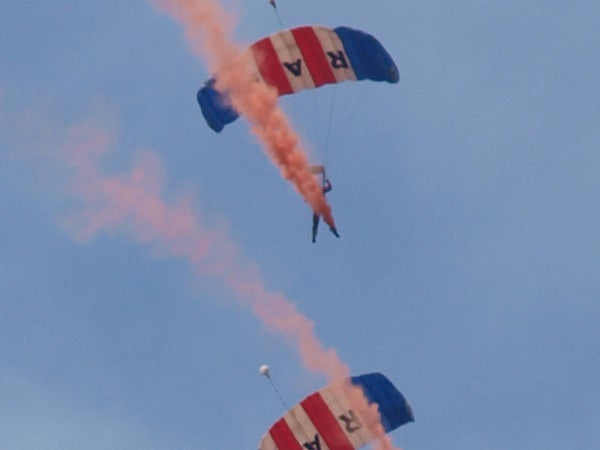 This is a crop from the image above. 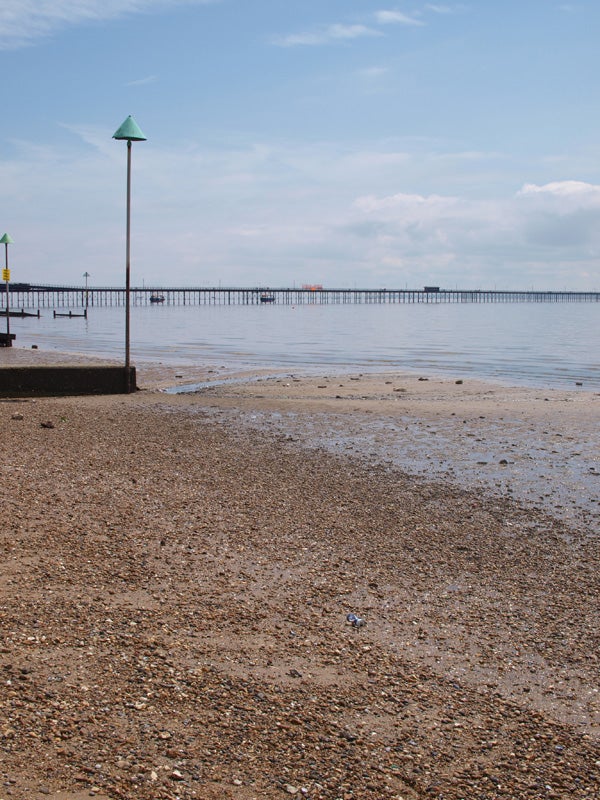 Exposure is generally right, with just a hint of underexposure to maintain highlight detail. 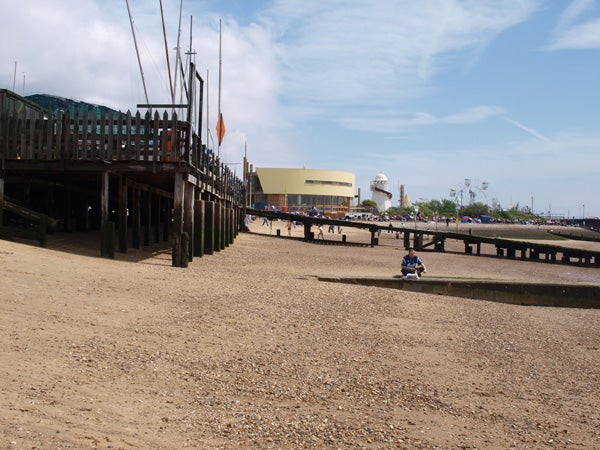 Tone, colour and contrast are good in good lighting, but could do with a boost of contrast in flatter conditions. 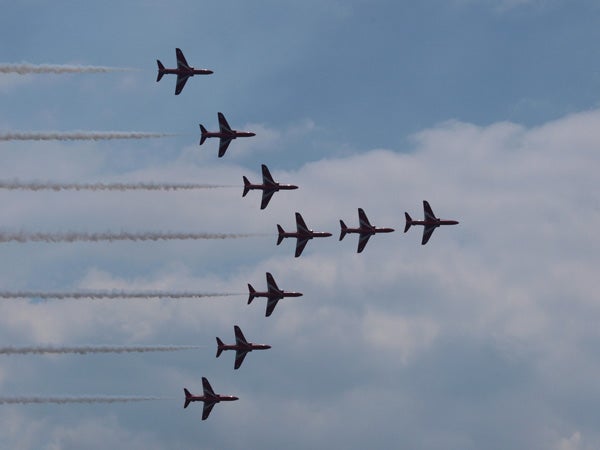 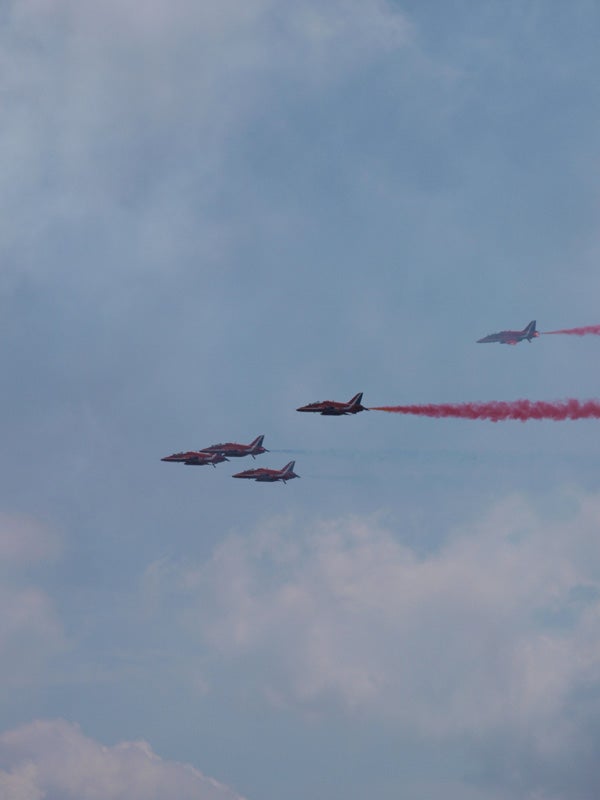 The new IS mode 3 is designed for vertical panning and also does a good job.