Hailed as the world’s smallest and lightest DSLR, the Olympus E-420 replaces the E-410 in the Olympus Four-Thirds system line-up. With 10 million effective pixels, from a total of 11.8 million, it seems like Olympus may have hit a bottleneck with the four-thirds sensor. This is the sixth DSLR in the range (since the original E-400) to feature this pixel count – and that includes the flagship E-3. 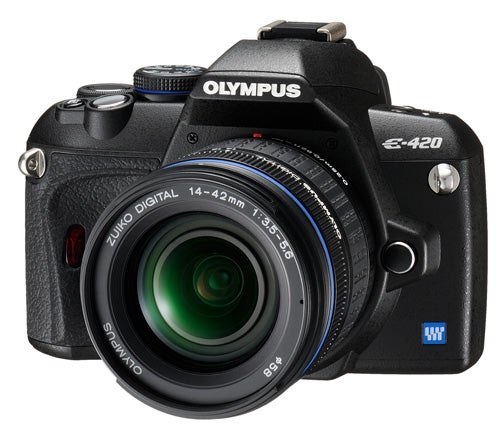 At the same time as Olympus announced this model, it also launched a 25mm f/2.8 pancake lens, which, with the camera’s 2x magnification ratio equates to 50mm in 35mm terms. This low profile lens combined with the small camera promises to be an almost pocketable DSLR (for cargo pants wearers at least). However for the purpose of this test we used the 14-42mm f/3.5-5.6 kit lens pictured. Like the other cameras from the E-400 series, this model doesn’t have in-camera image stabilisation.


Despite the small size of the camera’s body, Olympus has managed to incorporate a 2.7inch LCD onto the back of the camera, with Live View courtesy of the Live MOS sensor. Like the E-520, the E420 has autofocus in Live View mode, thanks to the inclusion of both contrast detection AF (usually found in compact cameras) and phase difference detection system (normally used in DSLRs), making the focusing with Live View much quicker. The default autofocus setting is the Imager AF mode, in which focus is maintained by the imaging sensor. In this mode the reflex mirror doesn’t move during shooting, maintaining a clear view of the scene at all times, though the image dims slightly during exposure. 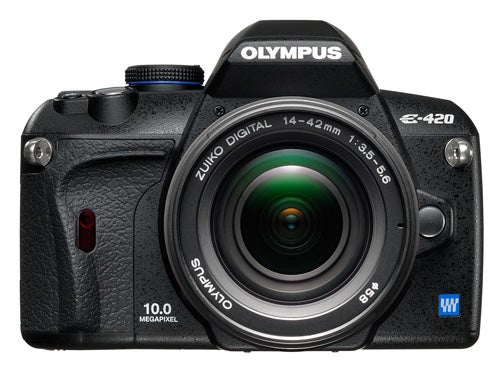 Two further AF mode options are in the menu; Sensor AF which uses the sensor built into the pentaprism, and Hybrid AF, which uses a combination of both sensors depending on whether the shutter is depressed halfway or all the way down. The Imager AF offers 11-selectable focus points, while the other two only offer three selectable AF points. The camera also now has face detection AF.


Olympus also claims that the LCD, which uses it’s improved HyperCrystal II Technology, delivers twice the contrast of previous models and offers better viewing in extreme lighting conditions. Olympus also claims it offers better colour detail and a wider angle of view of 176 degrees. Resolution has been given a slight boost in the process with 230,000 dots as opposed to 215,000 on the E-410. 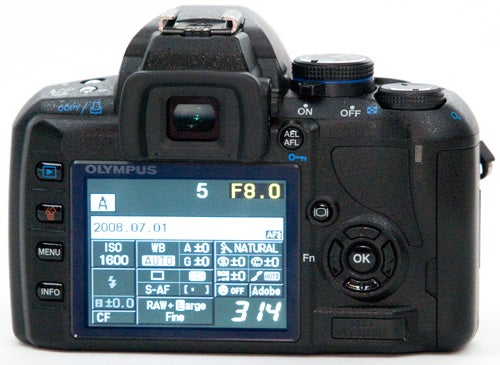 Alongside the controllable auto exposure modes – Program AE, Shutter Priority AE and Aperture Priority AE – and Manual mode, the camera offers Auto shooting for complete beginners, as well as 18 scene modes, with examples of the type of scene pictured on the LCD. The most common scene modes of portrait, landscape, action, macro and night scene are all selected on the top plate dial along with the more advanced exposure modes.


A new headline feature is the Perfect Shot Preview. An instruction manual wasn’t supplied with the camera, but this appears to work by using Live View alongside the Scene modes or colour modes, with the effect of the mode visible on the LCD before you shoot. 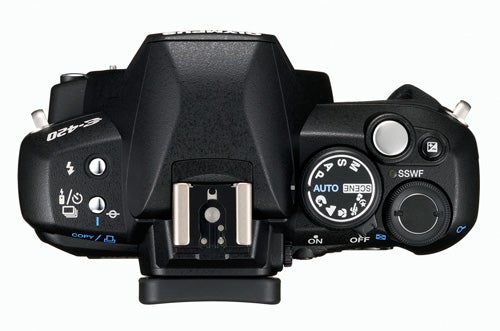 In keeping with the other cameras in the range, the E-420 has the SuperSonicWave Filter, which blasts the sensor with high-frequency sound waves at start up and shut down to clear any debris that may have affixed itself to the sensor surface.


Olympus claims to have improved the white balance algorithm for more accurate auto white balance and of course a number of manual presets are included to cover common lighting conditions. It also keeps the TruePic III processor of its immediate forebear (and other recent models), though burst speed has now been improved from 3fps to 3.5fps.

As has been mentioned, the camera is small and lightweight, but nonetheless it is comfortable and easy to hold. I sometimes feel that smaller cameras with a protruding grip are difficult to hold – the Canon EOS 350D springs to mind, as the purchase tends to be too small for my long slender fingers. This isn’t the case with the E-420. It’s traditional flat styling allows the camera to sit neatly cradled between my fingers and the palm of my hand. A minor criticism is the protruding strap lugs which can dig into your finger a little – if they were more flush, it would be more comfortable and streamlined. 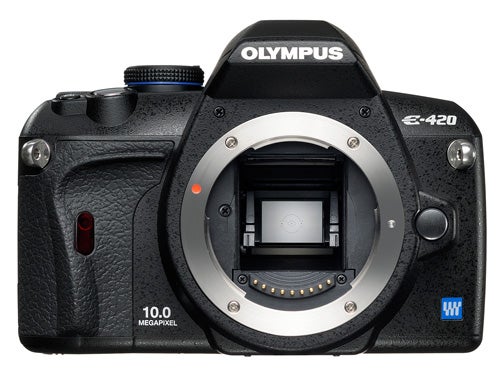 The viewfinder is a mite difficult to see completely. Even though the viewfinder area is small, something that is typical of the Four-Thirds system, it’s difficult to read the viewfinder shooting information on the right of the main screen. Shooting in bright conditions hampers this more – the green LEDs are too dim to see and I had to resort to using the main control panel on the camera back quite often. As this entails repeatedly taking taking my eye from the camera it soon became annoying.


The Live View system and LCD are bright and usable even in very strong sunlight, though I still prefer an optical viewfinder for composition. While I appreciate many of the benefits of Live View, I prefer the tilting screen versions. Shooting low or high is to me the major benefit and fixed screens by their nature don’t allow that. 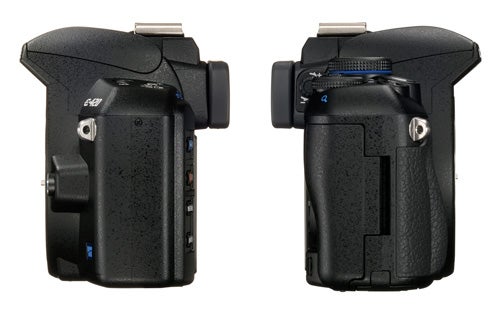 There’s some debate about the value of the main control screen accessed by the LCD. Some people prefer more direct access buttons, some people don’t. Personally I like the Olympus and Sony system of quick access via the thumb pad and scroll wheels. It generally works quickly, and once you get used to it it’s very intuitive. It’s also good to quickly check all your shooting parameters in one go rather than go through menus or a million buttons. I’ve lost count of the time of the times I’ve grabbed a camera to shoot, only to find that I’ve left it in some weird set up from the last use and ruined the picture (the benefit of raw shooting is that often this is fixable).

I remember attending the launch of the Four-Thirds system at the Photokina camera show in 2002, where Olympus claimed that a fully integrated digital system had many advantages over the more organic developments of the competitors. At the time it made a lot of sense and many of the innovations Olympus developed have since been incorporated into other manufacturers’ models (despite their scepticism and derision at the time!).


The major claim though was an improvement in image quality. However we have yet to see any major improvement, and certainly in the case of image noise Olympus has struggled to reach the high ISO performances of, other manufacturers such as Nikon or Canon.


This continues with the images from the E-420, which have good noise control at the lower ranges of the sensitivity, but problems increase as the gain is raised. I wouldn’t say the noise is terrible but it is visible, and has a granular texture that some photographers may like. Chroma noise is maintained at a similar level throughout the colour channels, so I’d say it’s well controlled. It’s just a shame Olympus can’t match the higher ISO ranges of some of its rivals. 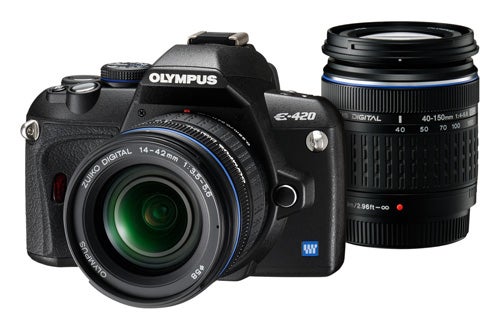 One area in which the Olympus E-420 excels is detail management. Images are smooth and detailed, with very good sharpness, even with the basic kit lens, and very little sharpness fall off at the corners is evident. Similarly there’s no sign of vignetting.


Exposures are generally good, though slightly underexposed. This maintains good highlight detail, but means for the perfectionist a certain level of post processing is required to bring the images up to par. For the average user, whom this camera is really aimed at, it’s good enough for general snapshots and experience will allow them to learn thanks to the cameras more advanced exposure features.

There’s very little to criticise in the overall specification and performance of the E-420. I like it’s size – it’s ideal for travelling and is reminiscent of my old OM4 in some aspects of its handling.


Images are generally good too, with excellent sharpness and detail. Colour is crisp and while exposures are slightly underexposed to my taste, they do maintain good tonality throughout the range.


The Four-Thirds system is somewhat contentious amongst the more vocal geeks on the forums, but it has many benefits and is definitely worthy of consideration to anyone coming to a DSLR for the first time. The Olympus E-420 is a pleasure to use and it’s simplicity combined with the more advanced features allows the newbie to learn and grow as well as just enjoying taking good images. 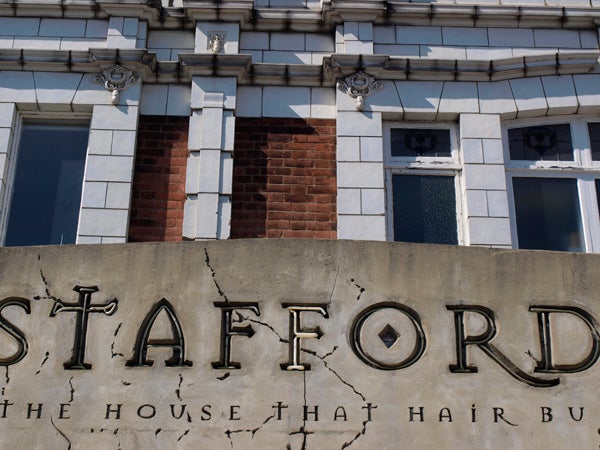 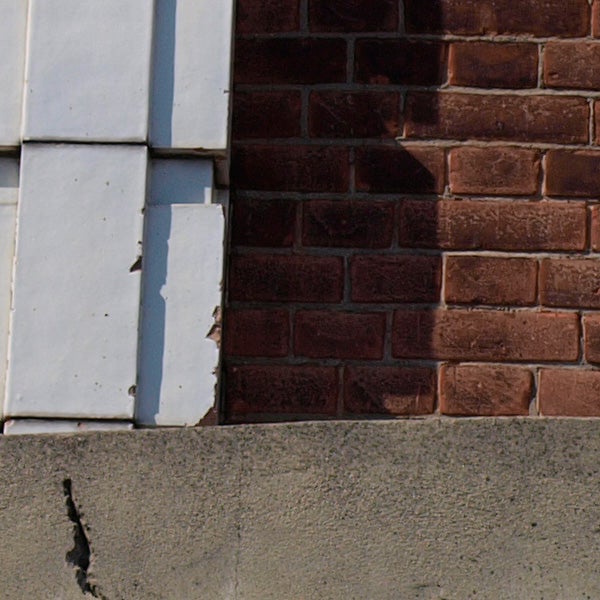 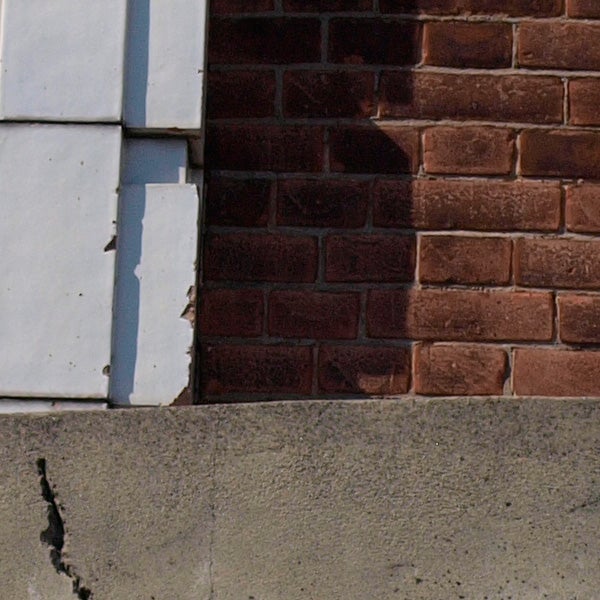 ISO 200 maintains the fine detail and is noise free 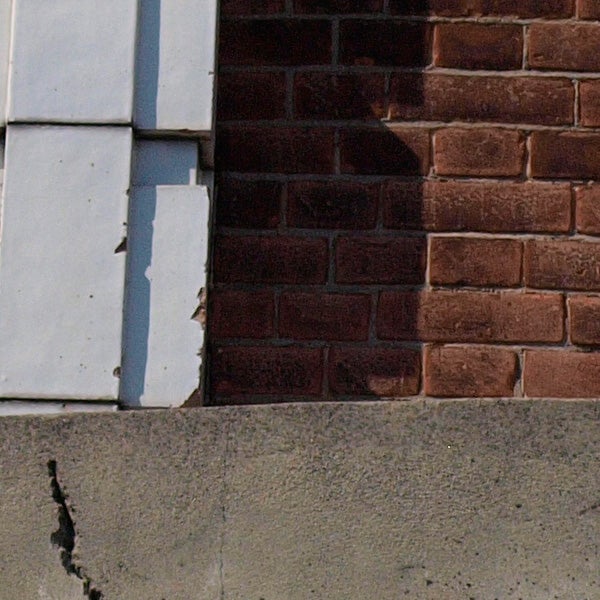 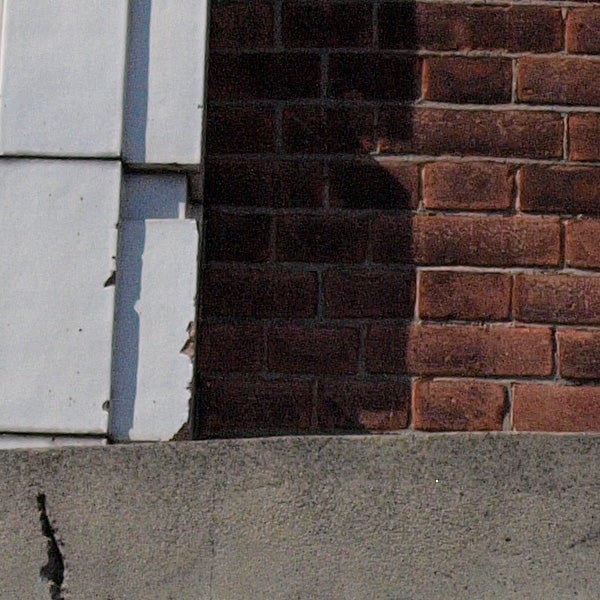 ISO 800 has more noise but images are still usable 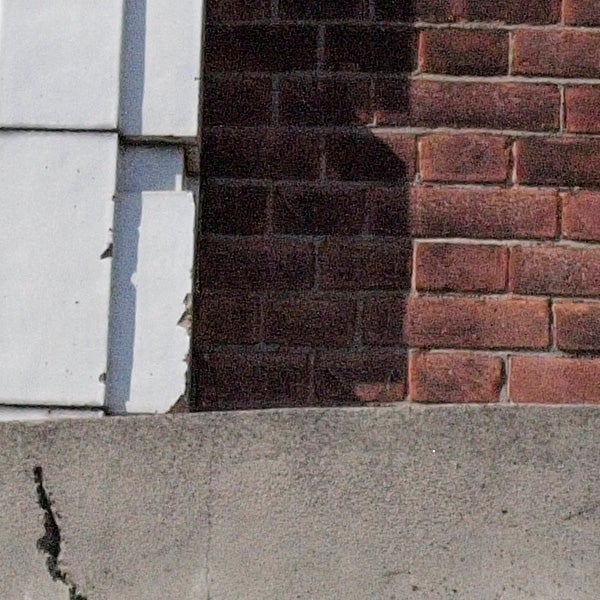 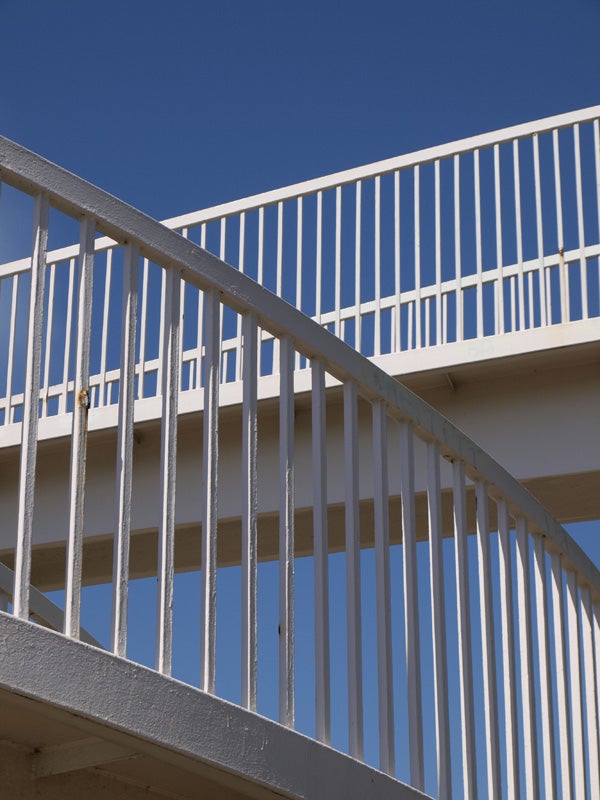 Exposure is generally good, but errs towards slight underexposure to save the highlights from blowing 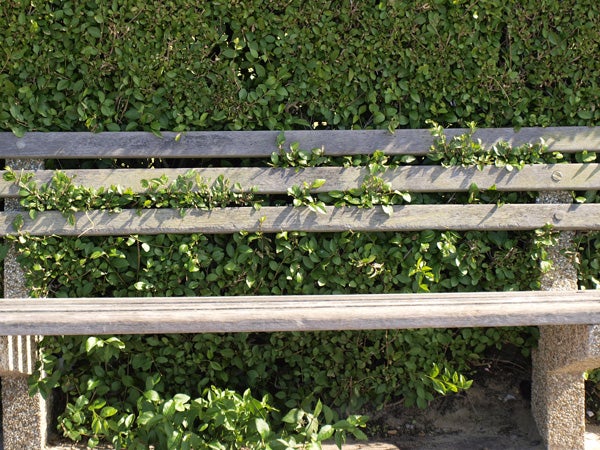 There’s plenty of detail maintained in the images 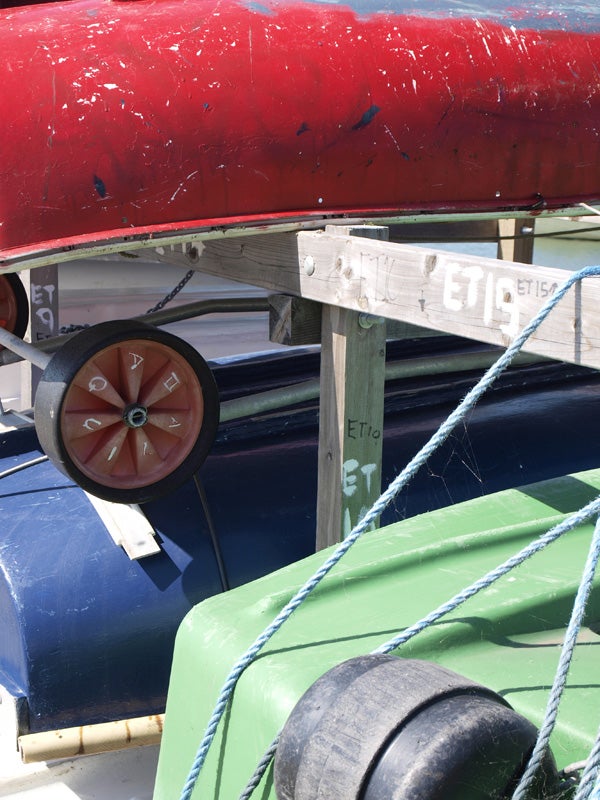 Colour is accurate and punchy 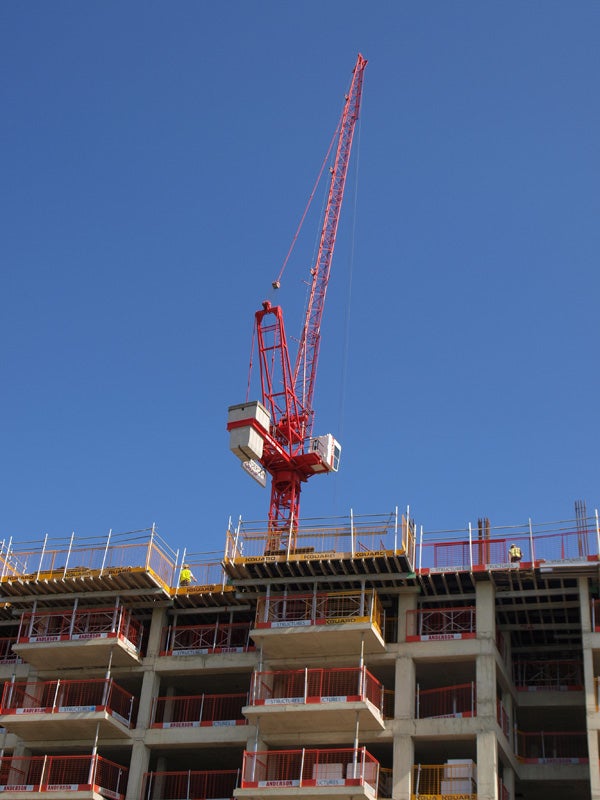 The E-420 is capable of great colour and sharpness 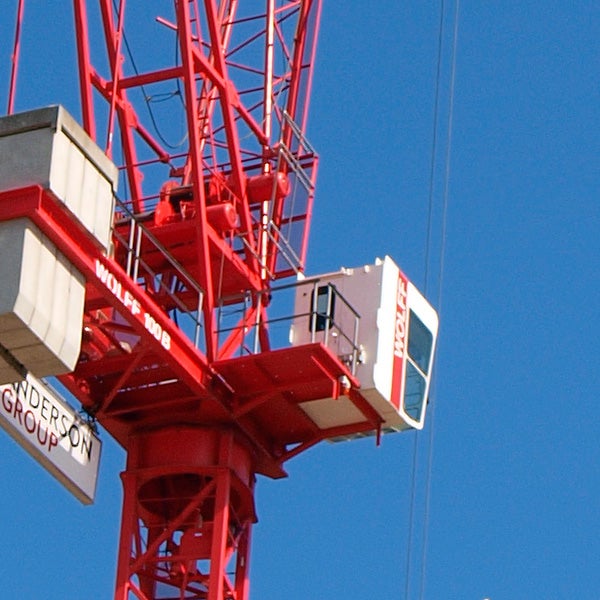 This is a 100% crop of the previous image 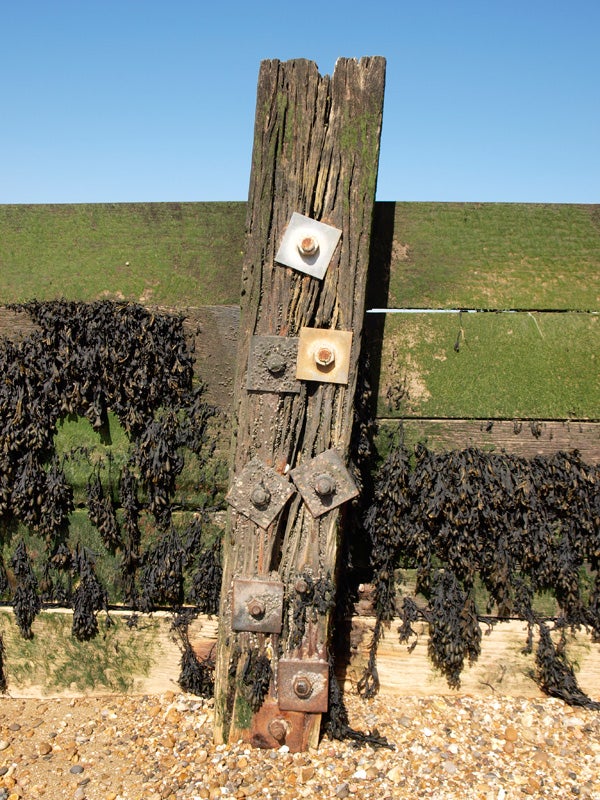