On Tuesday I reviewed the Olympus E-510 digital SLR, a £600 high-spec semi-pro DSLR with body-integral image stabilisation, SSWF anti-dust system and monitor live view, and I was more than a little impressed with it. Today I’m taking a look at the E-510’s little brother, the E-410. 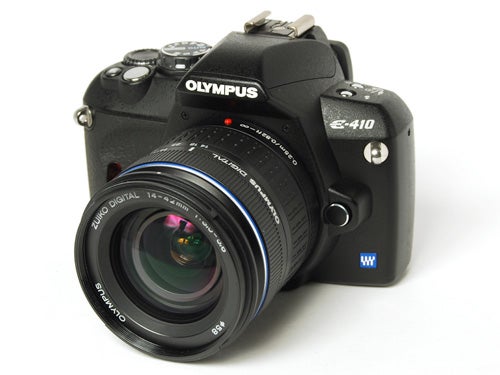 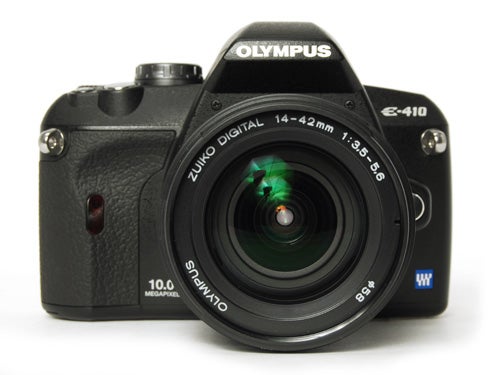 When I say that the E-410 has a lower specification than the E-510, in fact the only major feature that it lacks is the image stabilisation system. It has everything else, including the SSWF anti-dust system, live view on a 2.5-in 230Kp LCD monitor, and the ability to use both xD-Picture and CompactFlash cards. Like its larger sibling E-410 has an extremely complete menu system, with lots of user settings such as fully customisable white balance and colour modes, adjustable noise filtering and an anti-shock mirror-up mode, but a few of the more advanced features such as white-balance or flash bracketing, ISO limiter and the ability to alter the size and compression ratios of HQ and SQ image modes have been trimmed off. Like all of Olympus’ other DSLRs it also has a good on-screen quick menu system for most common adjustments, although it does lack several of the one-touch shortcut buttons of the E-510, making the control system a lot less daunting.

Nonetheless the E-410 still has much the same specification and performance as the E-510. It has shutter speeds of 60 seconds to 1/4000th, an ISO range of 100 to 1600, and the same excellent metering system, with evaluative, centre weighted, and three spot metering modes including highlight and shadow settings. It also has a similar selection of basic shooting modes, full auto, five special program modes, program auto, aperture or shutter priority and full manual exposure, as well as 20 scene modes, which is two more than the E-510 since it includes modes for the optional underwater case, and accessory which is not currently available for the E-510. The E-410 also matches the E-510 for shooting speed, with a continuous mode capable of three frames a second in SHQ resolution. It has the same very fast AF system, and the same low-light focusing ability, using a pulsed burst from the pop-up flash as an AF illuminator. It also has an identical viewfinder, which like other Four Thirds cameras is a little tunnel-like, but nice and clear. 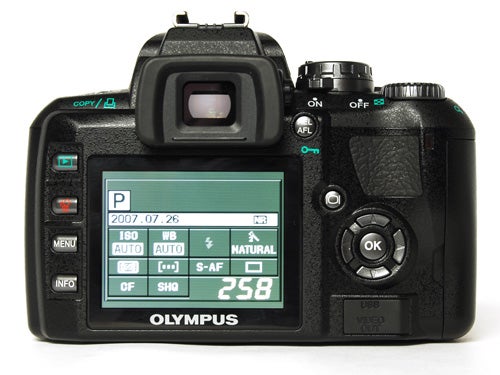 It is in outward appearance that the two new Olympus DSLRs differ most. While the E-510 is a full-size SLR with a large handgrip, the E-410 has the same slim, compact design of the E-400. In fact it is exactly the same size and weight as its predecessor, measuring a tiny 129.5 x 91 x 53 mm and weighing only 375g body-only, making it one the smallest and lightest DSLRs on the market, and over 100g lighter than any of its immediate rivals. The lack of a large handgrip may feel a bit odd if you’re used to larger modern SLRs, but for anyone who’s been around a few years it will have a pleasantly nostalgic feel, reminiscent of old film SLRs such as Olympus’ own OM system. The slim profile does mean that the top plate is a bit crowded, especially on the right, but in actual use this doesn’t seem to present any problem, and the camera handles extremely well. It is also light enough to operate comfortably with one hand. 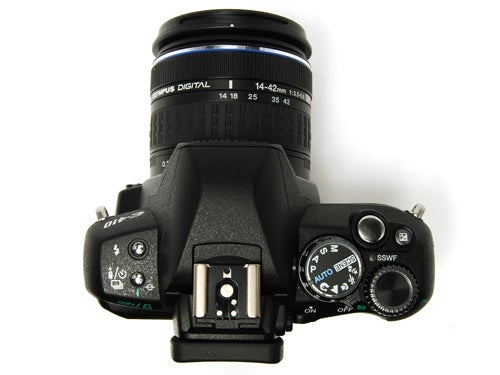 In terms of build quality the E-410 is well up to scratch. It has a very tough glass-reinforced plastic body which feels very solid and sturdy despite the camera’s low weight. As with the other E-series cameras the fit and finish of the controls and body panels is very good, so dust ingress isn’t likely to be a problem. The LCD monitor is nice and bright in playback and menu modes, and is also nice and sharp. The live view mode is a useful extra, but it is a little dark compared to the viewfinder, and in lower light the frame rate drops noticeably. As with the E-510, the AF system doesn’t operate while live view is active, so it does introduce some shutter lag, since the reflex mirror has to be lowered and raised again to enable focusing. This is especially noticeable in lower light conditions, where the AF may falter briefly.

Some reviewers have expressed concern over the smaller battery powering the E-410. In order to fit it inside the small handgrip it uses a 1150mAh Li-ion cell, rather than the large 1500mAh units that power most other DSLRs, including the E-510. I’d have to agree that heavy use of the live monitor view would probably shorten the battery life somewhat, but I don’t think this will be a problem for most users. The majority of people will prefer to use the optical viewfinder, since this is one of the main advantages of the SLR design, and will treat the live view as what it is; a useful extra feature that is used only when needed. 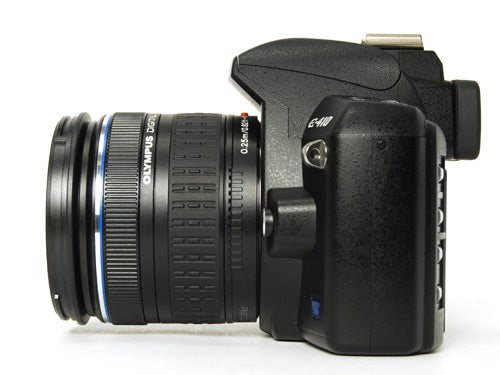 Since the E-410 has the same sensor, lens and image processor as the E-510, it’s not surprising that the image quality is also identical. The 10-megapixel Four Thirds sensor, while physically smaller than the APS-C sensors found in most other DSLRs, still produces an equivalent level of fine detail, and high ISO noise control is as good as anything else on the market. As with the E-510, there is perhaps marginally less dynamic range than an equivalent APS-C camera, but if so it is barely noticeable. All in all, the E-410 produced extremely good image quality under all circumstances, despite the lousy weather available during my test period. 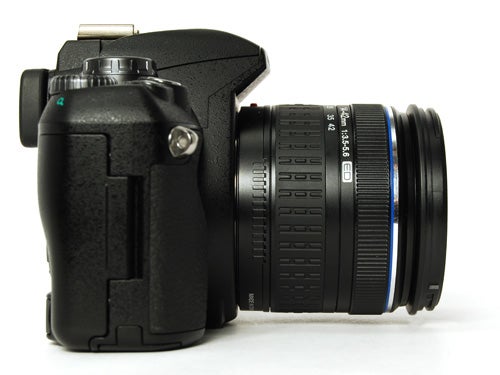 Although currently slightly more expensive than some of its competitors, the E-410 has several advantages, not least its compact dimensions, low weight and useful live view feature. It also offers fast performance, extremely high image quality and a very wide range of creative control. If you want a highly portable DSLR and aren’t too bothered about image stabilisation then the E-410 would make a rewarding enthusiast’s camera. 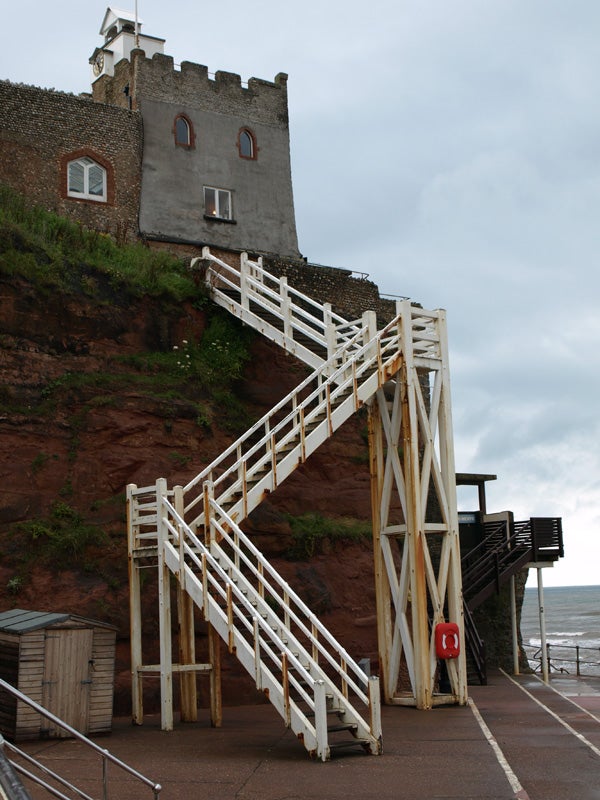 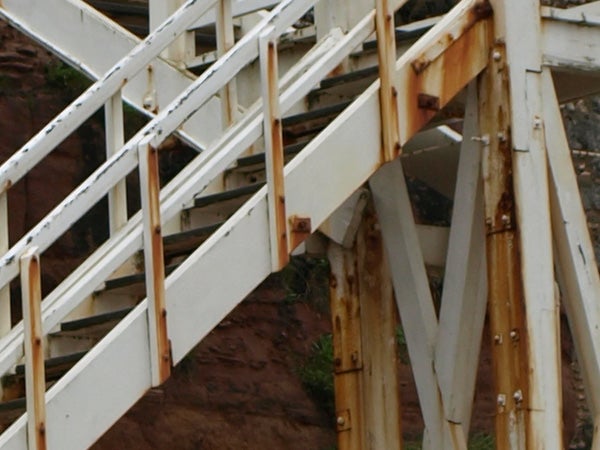 At the minimum setting of ISO 100 there is, as you would expect, no image noise. 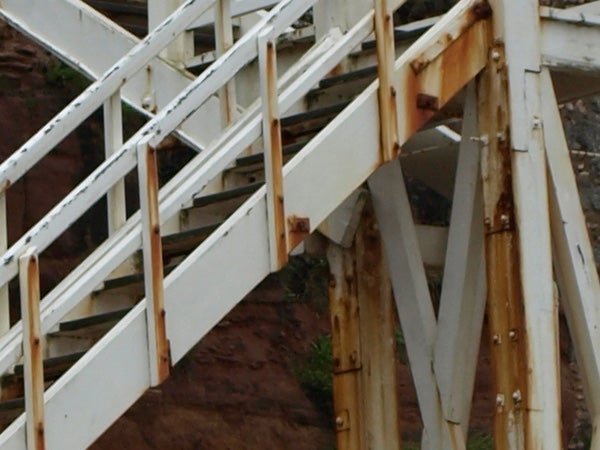 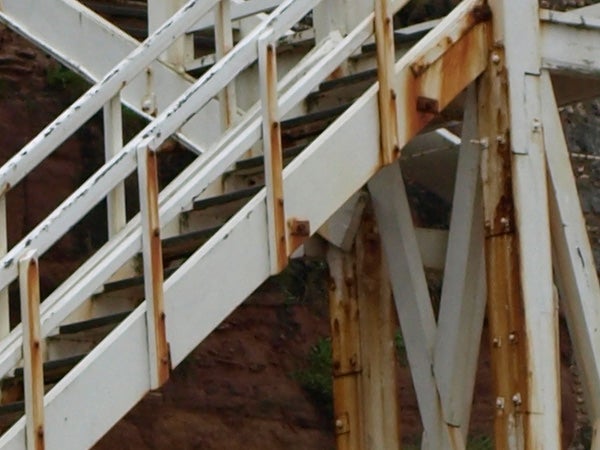 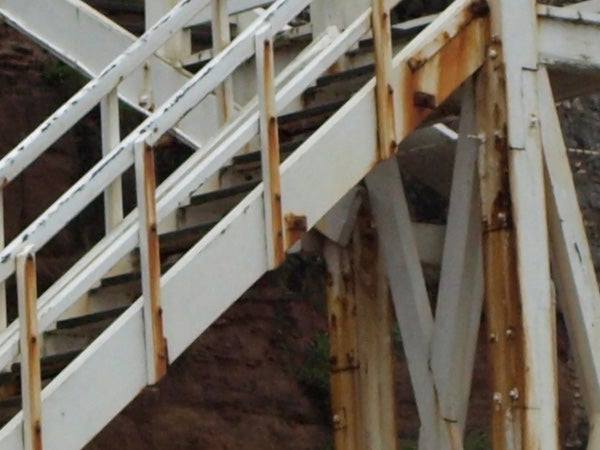 Some loss of saturation at 800 ISO, and a little visible noise too. 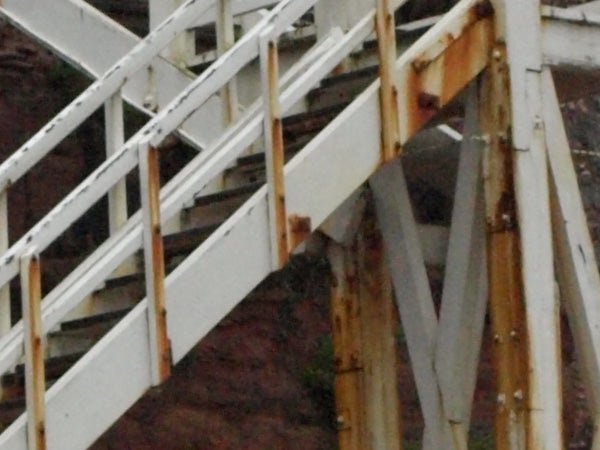 Some loss of detail and visible image noise at 1600 ISO. 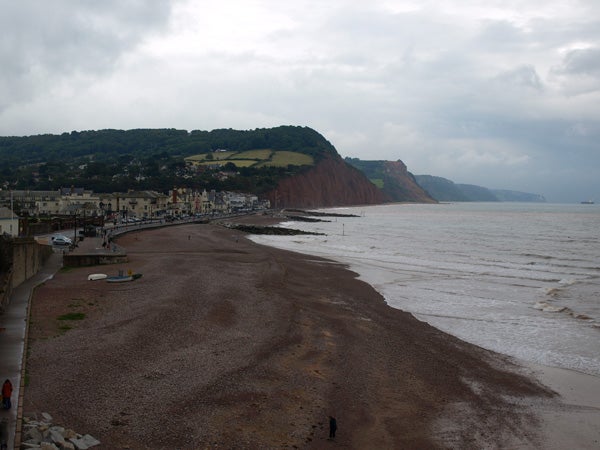 Due to the vagaries of JPEG compression, the full-size version of this image was, at over 6MB, too large for our download system, so you’ll have to be content with the full-size crop below. 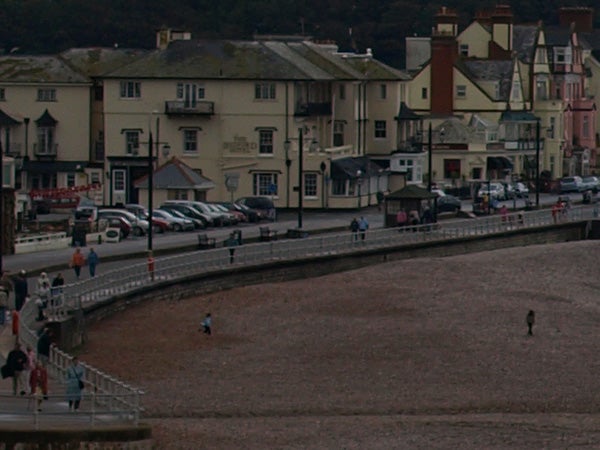 Compare this with the similar shots that I’ve taken with other 10MP DSLRs, but bear in mind that it was taken on a very dull overcast day. 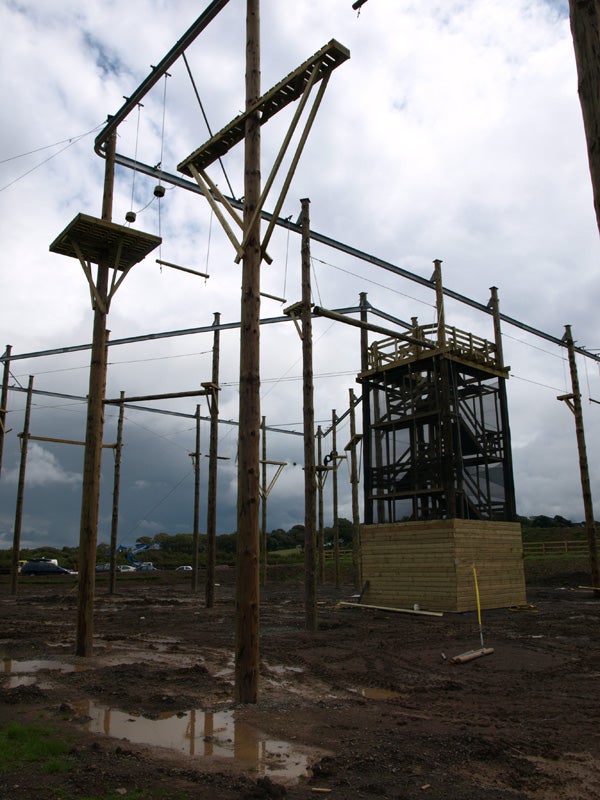 The 14mm wide end of the kit lens is equivalent to 28mm, good for wide-angle shots. Yes, that’s an overhead assault course type of thing. No, I didn’t have a go on it. 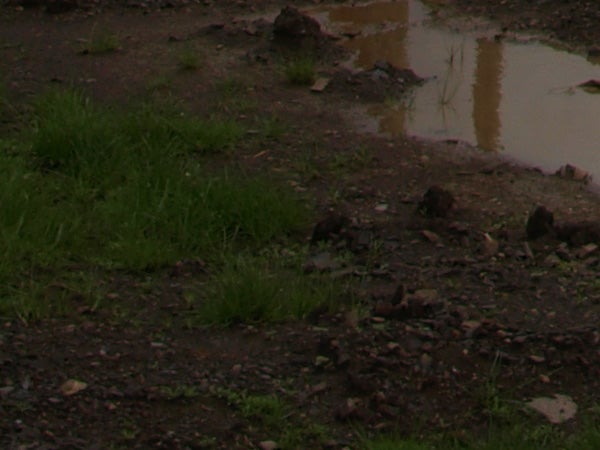 This full-size corner crop from the above image shows the excellent corner sharpness of the Zuiko kit lens. 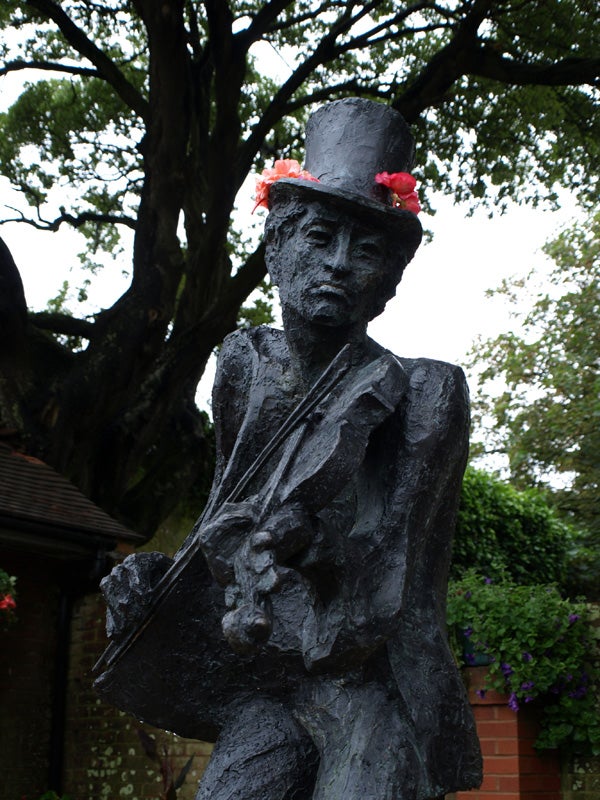 The Four Thirds sensor may have slightly less dynamic range than an equivalent APS-C sensor, but I think any camera would have burned out the sky in this shot. 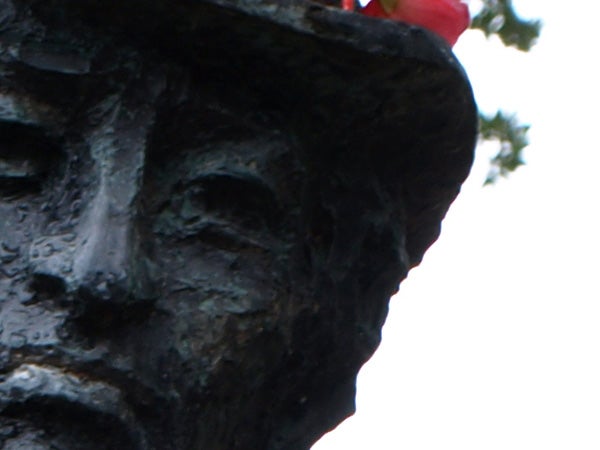 Good edge definition and no fringes 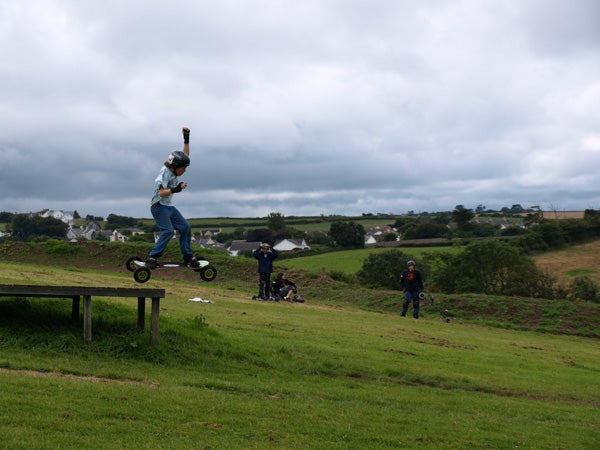 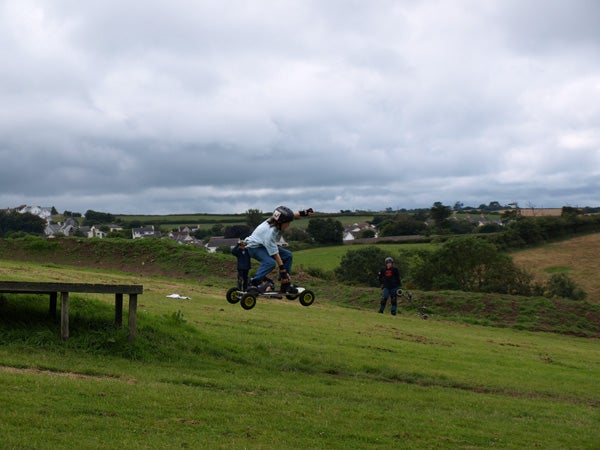 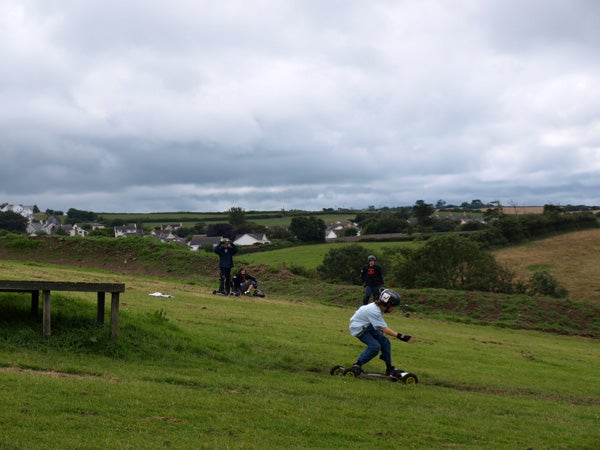 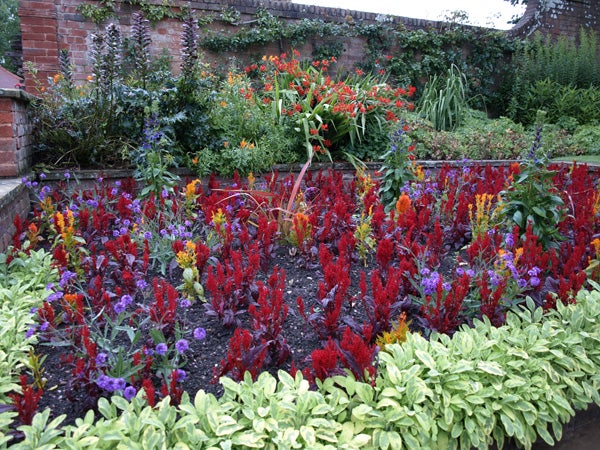