We don’t often review printers and multifunctions in the £2,000-£3,000 price range, but OKI’s MC860dn has a couple of interesting features which make it particularly attractive for the workgroup market. As well as having OKI’s trademark LED print engines, it can print up to A3 and comes as standard with both duplex print and duplex scanning.


Given that this is an A3 machine, it’s not that big. Although it would be happier sitting on one of OKI’s optional cabinet and stand accessories than on a desktop, it’s not going to take up half your office, as some of its competitors might. It doesn’t have a particularly integrated look, with a substantial A3 scanner mounted on two columns and looking fairly obviously like a laser printer and scanner brought together from other production lines. 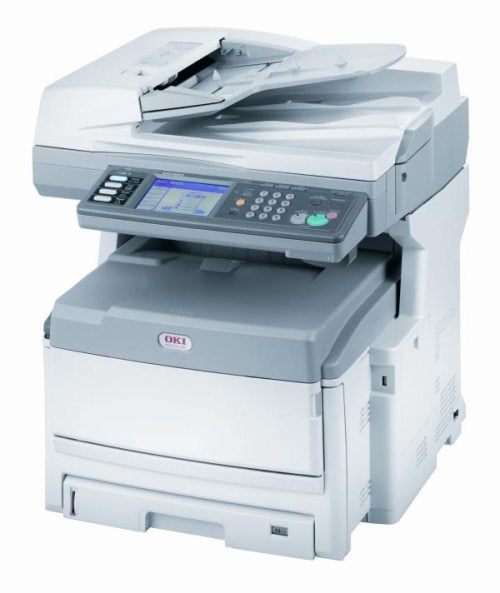 Against this, the scanner swings up on two substantial gas struts, so you can lift the top cover and reveal the four drum and toner assemblies, which are all easy to get at, along with the machine’s fuser.


The Automatic Document Feeder (ADF) on the scanner can take up to 50 sheets and can read both sides of each sheet, though by reversing the paper and rescanning, rather than having a duplex scan head. This is slower technique but, when copying duplex documents, it’s the print engine which governs the overall speed, so it shouldn’t slow copies.


The only paper tray supplied as standard with the MC860dn takes up to 300 sheets of A4 or A3 paper – all the trays on the machine are multi-size, and there’s a 100-sheet multi-purpose tray, too. Although there are two options for adding extra trays, with one or two, 530-sheet add-ons, we feel a full ream should be the minimum capacity for any machine aimed at the workgroup.

The machine’s large control panel is well laid out, with many of the buttons you’d expect to see being replaced by a 145mm mono touchscreen, which is well laid out with a mainly graphical display. Those buttons there are control mode selection, for copy, fax, scan and print, provide a number pad for fax dialling and include three large buttons for mono and colour jobs and to cancel a current one.


Although the machine has a number of different consumables, they are provided preinstalled, so it’s just a question of removing sealing tapes on the toner cartridges. Partly due to the use of high-intensity LEDs to illuminate the MC860dn’s drums, the machine is very easy to service.


OKI provides full copies of OmniPage OCR and PaperPort document management software, both from Nuance, as well as local and network drivers. The machine comes as standard with USB, Ethernet and parallel ports, so is easy to integrate into most office environments.

Given the market this machine is aimed at, we decided to upgrade our standard tests and rather than using five and 20-page text and text and graphics jobs, we used 20-page and 60-page ones, instead. The machine is rated at 34ppm black and 26ppm colour, when printing A4 pages, but our tests produced real-world speeds of 26.5ppm and 19.4ppm for black and colour, respectively. In duplex mode, we still saw 21.2spm and, when printing A3 documents, speeds came out at 13ppm simplex and 11.5spm duplex.


We suspect part of the difference between our results and OKI’s is the fact that we include processing time in our tests, since you probably won’t be able to continue work, until the document is lying on the output tray. We’re pleased to see the new ISO standard for print speeds agrees on this point. 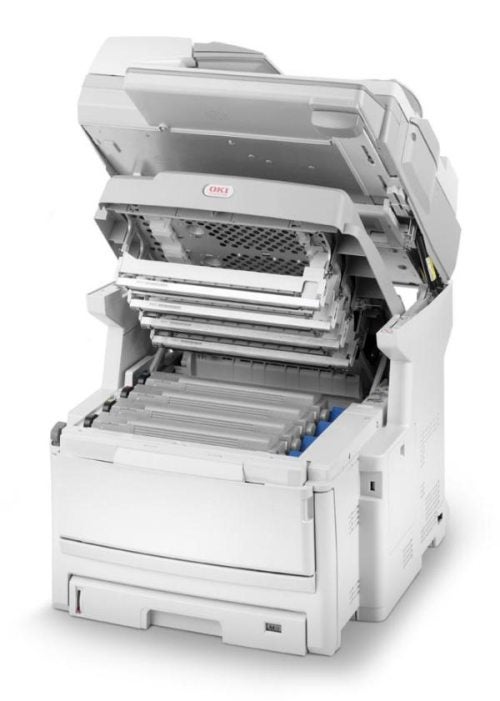 The quality of prints we produced varied. Black text was fine, with crisp, well-formed characters, but there were one or two problems with colours. Some of the colour tones we reproduced were quite a bit darker than from the original document, so much so that black text over a blue background, normally very visible, was hard to read.


Also, registration of black text over colour showed noticeable haloing, despite OKI’s automatic registration adjustment. When we copied one of our test pages, things were worse, with the blue graphic coming out several shades darker and the overlay text being unreadable. These kinds of problems could be mitigated against by control panel settings or, for scans, by making changes in the software receiving them.


Our photo print, at the machine’s default resolution of 600 x 1200dpi, is reasonable, though much of the shadow detail in the image is lost and there are patterning effects in the sky. Business lasers, and LED printers, are increasingly required to produce photo images and, although not a core part of their work, more work needs to be done on the range of colours they can reproduce.


When you pay that bit extra for your machine, you expect to claim back some of the total cost of ownership in low page costs and that’s certainly true with the MC860dn. Although there are four consumables: toner, drums, fuser and transfer belt, their prices are pitched so that we calculate a black page will cost 2.04p, including VAT and 0.7p for paper. Similarly, a colour page comes out at 7.64p. Both these costs are low for laser-type print.

The MC860dn is designed as a general-purpose office workhorse and it can certainly handle the throughputs it’s likely to see in a busy workgroup. While the speeds aren’t quite up to manufacturer’s spec – they rarely are – it’s the colour quality which is the more worrying. While business graphics are bright and attention grabbing, their fidelity to transmitted or scanned originals leaves something to be desired.