OKI’s C710dn is a workgroup colour LED printer, designed for reasonably heavy use with five or six people sharing the machine. It can be connected by Ethernet, USB or parallel ports and comes complete with a duplexer for double-sided print.


The C710dn is designed with a linear engine, with each of four drum and toner cartridges positioned one behind the other. OKI uses high-resolution LED illumination in its drums, so there’s no laser mechanism. You’d think this would reduce the size of the machine, but in fact it’s quite bulky against some of its competitors. 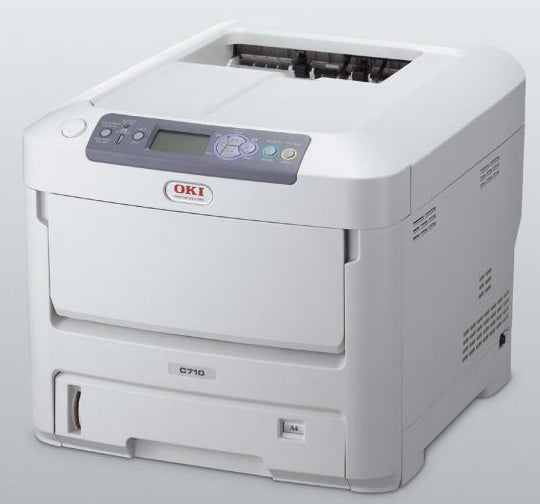 The front panel includes a bitmapped, mono LCD with a good backlight, which can show up to 4 rows of 16 characters. To the right are the usual menu controls, while to the left are buttons for the help function and to show any error messages. At the extreme left is a large button with an indent, so it looks as if it should rotate, but is in fact the cover release, so you can get at the consumables.


At the top of the front panel is a pull-down shelf, which becomes the multipurpose feed for up to 100 sheets of special media. Below this is a large 550-sheet main tray. It’s good to see a tray which can take a full ream of paper at a time.


Hardware installation should have been easy, but a couple of things got in the way. For a start, you have to remove each of the combined drum and toner units to pull off two pieces of protective film around the drums. When we removed the black unit, holding by the handle on the toner cartridge, and were in the process of pulling the film off, the drum unit dropped off the toner cartridge, depositing large amounts of toner all over our test bench and PC keyboard. The lesson is to hold each cartridge unit carefully.

Then there’s software installation. You load the drivers and the OKI wizard informs you that the Windows New Hardware wizard will start. It doesn’t say if you should proceed with it or cancel it, which is typical with printer installations. We went through the New Hardware wizard, which didn’t seem to know the drivers had been installed, or where to find them. Eventually, we got it sorted, but more instruction from OKI would definitely be a bonus.


The printer comes with both PCL and PostScript drivers for Windows and OSX, though no mention is made of Linux or UNIX support.

The usual hype over print speeds is apparent on this machine, as with many others. OKI claims 32ppm for black pages and 30ppm for colour. While we wouldn’t contest that colour prints are only marginally slower than black, the headline figures are quite a bit higher than you will see in typical use. Our five-page black text print, still more than the average length of European office documents, took 32 seconds, a speed of 9.38ppm, though increasing the job length to 20 pages more than doubled the speed. This is because the machine waits 15 to 20 seconds before starting to print the first page of any document.


Perhaps the most interesting result from this printer is its performance when duplexing. With most printers, duplex speed is around half that of single-sided print. Here, though, our 20 page, single-sided document took 1:03 to complete, a speed of 19.05ppm, while the same document printed duplex took just 1:08, still 17.65spm.


The C710dn uses an internal duplexer, so the paper doesn’t have to be part-ejected from the top slot and reversed back into the machine. There is absolutely no reason why it shouldn’t be set to duplex by default, for consequent paper savings. 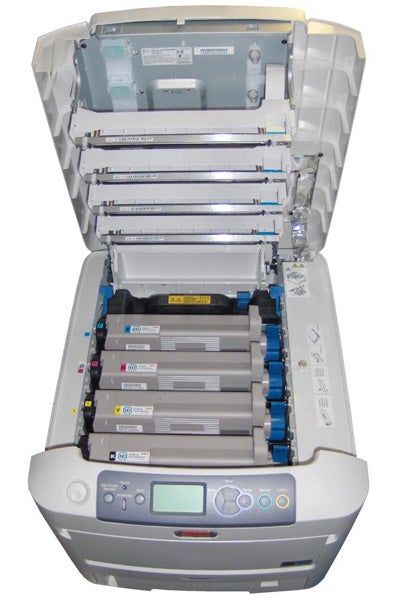 The printer’s default resolution of 600dpi is more than adequate to produce excellent black text which is crisp and clean, with a slight gloss to the characters. Colour graphics are bright and dense, though by default some colours, particularly greens and blues, come through dark compared with originals. There are also some noticeable registration problems, where black text over coloured backgrounds shows white halos around characters.


Our test photographic print, at the printer’s maximum 600 x 1200dpi, looks very ‘seaside postcard’, with gaudy colours and quite a bit of missing detail in darker areas of the image. This is not the printer’s strong suit.


What all this means, apart from the fact that you’ll have to keep an eye on consumables usage, is that a black page costs around 2.29p and a colour one 6.85p, both including 0.7p for paper. These costs, particularly colour, compare well with most of the competition, but are beaten by some Kyocera Mita machines.


Despite the setup problems we experienced, this is a good workgroup colour printer. Though not ideal for printing photos, it’s pretty good at everything else and is one of the best machines for duplex print we’ve tested. Having four different consumables to consider could be logistically awkward, but they have long enough service lives for it not to be too much hassle.