OKI offers a range of mid-priced colour LED printers in its 5000 series, with the C5650n a Windows or Mac host-based printer at the entry-level end and the C5950n, the subject of this review, at the top. They all look physically the same, so what you get for your extra money?


That common appearance is functional enough, but manages to look rather datedly curved. The printer uses an in-line print engine with high-intensity LED strips in place of a laser beam. This reduces the complexity of the machine, while offering very similar print quality to most conventional lasers.


The printer has a commendably neat frontage, but is quite deep and shows a number of bulges, covering fans and other parts of its anatomy. A 300-sheet paper tray slides out at the front bottom, with a multi-purpose tray folding down and out above that. The tray can take up to 100 further sheets of special media or envelopes. 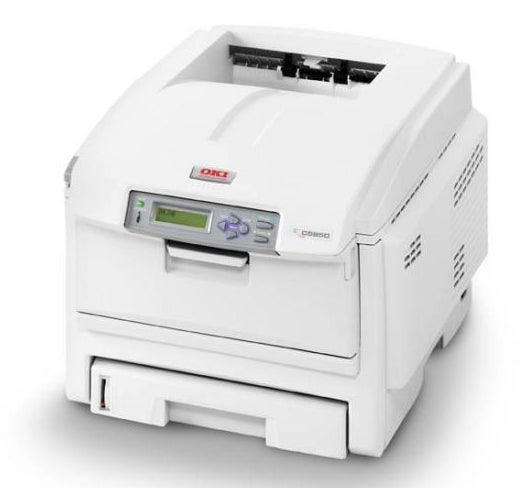 OKI’s control panel, which offers a backlit LCD panel with two lines of 16 characters, also looks a little antiquated, but it’s six, shaped buttons are easy to use to control the printer’s menus. There’s no sign of recent innovations such as a walk-up flash drive port, though the printer can handle direct PDF printing, if you send a file to it from a PC or across a network.


At the back are sockets for USB, Ethernet networking and a legacy parallel connection.


Set up could be easier. The supplied pack of CDs, which includes separate discs for a user guide, network utilities and a template manager – so you can download print templates direct to the printer – claims to cover the full range of 5000 series printers.


When run, though, the software only offers drivers for the C5750 and C5850. The installation routine then says the Windows Install Printer dialog will pop up, but neglects to say whether you should proceed with it or cancel it. In the end, we downloaded a C5950n-specific driver from the OKI site and installed it via the Windows new printer Wizard. OKI provides driver emulations for both PCL and PostScript languages.


There’s also a set of colour swatches, which are useful when calibrating the printer to produce good colour. They’re just a set of colour thumbnails, though; there’s no calibration utility included.

OKI claims 32ppm and 26ppm for black and colour print, which should make this a quick machine. Our five-page tests for black text and text and colour graphics took 21 seconds and 25 seconds, respectively. These times equate to real-world speeds of 14.3ppm and 12ppm, less than half the rated figures.


Speeds should increase for longer print jobs, where rasterising and warm-up times are a smaller proportion of the total and increase further if you use draft print mode. However, when we compare results like-for-like with, say, the Canon i-SENSYS LBP5360, we see very similar times of 26 seconds and 21 seconds from the Canon, even though it’s rated at only 21ppm.


The 15 x 10cm photo print test took just 13 seconds, which gives a good speed of 4.64 photos per minute. Default photographic output quality isn’t wonderful, with colours looking more intense than they should and shadow detail being all but lost to black. Black text and graphics look sharp and intense, other colours look excessively vivid and a bit picture postcard-ish. 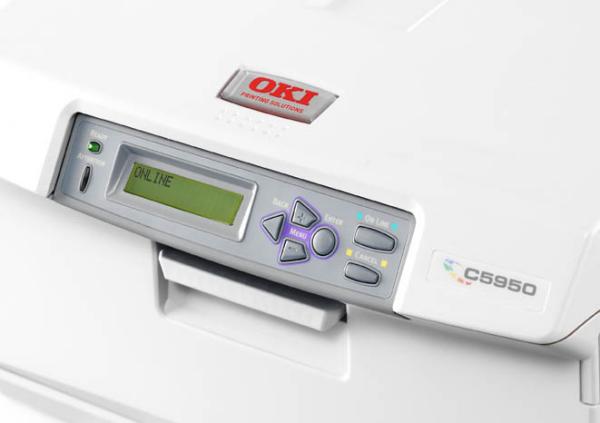 This very colour intensity makes the printer much better for business graphics and proofing graphic designs, where good, solid colours are an advantage. Reds and oranges are particularly strong, but greens and blues aren’t bad either and registration of colour backgrounds with over-printed black text is precise. Black text itself is well reproduced and is easily good enough for customer literature and general office print.


OKI quotes a noise level of 55.6dBA when printing, but we measured peaks of 63dBA, which is quite a bit louder – sound measurements are logarithmic.


Working out how much the C5950n costs to run is complex, as the printer uses separate drum units with clip-in toner cartridges, as well as a transfer belt and fuser, all of which have different service lives. Colour toner lasts 6,000 ISO pages, while the black cartridge gives up to 8,000 pages. Each drum unit should produce 20,000 pages and the belt and fuser are rated at 50,000 and 60,000 pages.


When we work through the figures we get page costs of 2.01p for black print and 7.80p for colour. Both these figures are good, up to a penny per page lower than the OKI’s most expensive rivals.


While this is a fair colour laser, we have to ask why it costs £135 more than the C5750n, which has a very similar spec and is just 4ppm slower. Given that the quoted speeds are a bit overblown, anyway, the C5950n looks a bit feature-poor compared to similarly priced machines which offer duplex, wireless connection and print from USB flash drives as standard.