It’s good to see a company stick with a technology and OKI has pioneered its high-intensity LED printing for the best part of 20 years. It now calls it digital LED, but of course it has always been a digital technology. It enables more compact printers than those using laser engines, as the LED engine is little more than a strip of lights.


The B2200 looks like a really compact personal, mono printer, about the size of a large bread loaf, until you slot in the paper tray at the back. This virtually doubles the printer’s depth, though, since the tray is well off the desk, you could still have something sitting behind the printer, so as not to waste space. 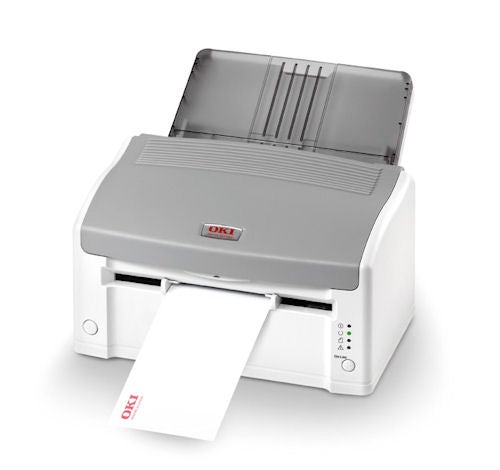 The paper path of this novel design is a little different from most. Although paper feeds normally from the rear tray, it turns through 180 degrees and feeds back onto the tray’s cover, which has a pull-out support at the back, to hold the printed pages. There’s a single-sheet feed slot at the front of the machine, so you can print special media and envelopes.


A column of four indicators down the right-hand side of the front panel show power, online, paper jams and other errors, and there are two buttons for power and online status. This is essentially a simple machine, though, with a single USB connection and nearly all control vested in the printer driver.


The internal print mechanism is pretty straightforward and the toner cartridge piggybacks on a small drum unit to produce a neat print engine. You have to push it quite firmly into position, which is a little unusual, but once this is done, the printer is very low maintenance. 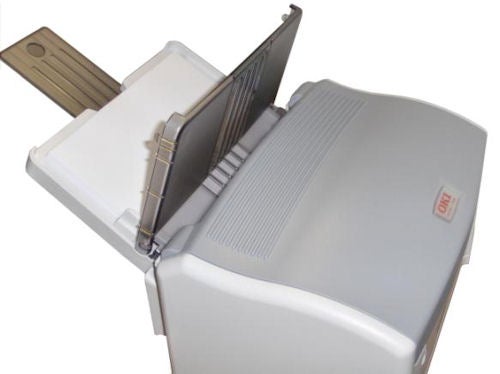 The B2200 is a GDI device, meaning it uses Windows print software, rather than a PCL or Postscript printer language. The only practical difference this could make is to the speed of print, since the rasterisation of each page is handled by the PC, rather than a processor in the printer. A slow PC could produce slower prints – though not in this case.


The driver offers to print two or four pages per sheet and to add a watermark to pages and you can manually adjust the photo image for brightness and contrast. There’s also a Template Manager, complete with a set of predefined templates which can be applied to pages. These cover standard business documents, such as posters and flyers, but also some less obvious ones, including menu cards, loyalty vouchers and beer mats.

OKI claims up to 20ppm for this little machine, but we only saw half this, at a maximum of just over 11.1ppm for our text and graphics print. Unusually, this test print was slightly quicker than the straight, five-page, black text test piece, at 10.3ppm, which shows the time the software rasterisation takes.


The text print uses five separate pages, while the text and graphics page prints five copies of the same file, so only one page is rasterised. Our final test, the 15 x 10cm photo print, took just 17 seconds. All these speeds are very respectable for a personal printer.


Printed output from the B2200 is good in parts. Text print is crisp and dark, with even small font sizes reproduced accurately and with no blurring. Business graphics are also reasonably good, though you can see the 600dpi dot pattern in areas of greyscale shading. 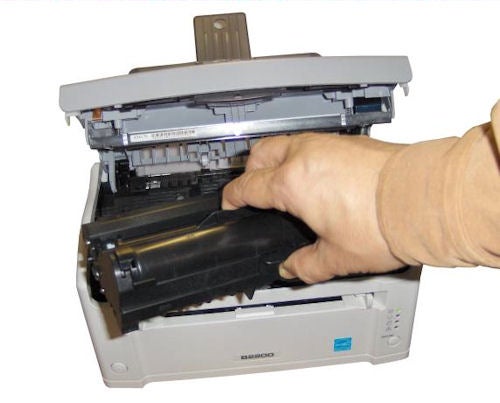 This is, strangely, less noticeable in photographic prints and the fine resolution of 600 x 1200dpi does a fair job, though there is still visible banding across the image. Mono laser printers never excel at printing photo images, so you wouldn’t want to use them for publicity materials. The B2200 would be fine for giving an indication of the placement of photos in a document, though.


There are two consumables to consider with the B2200, though the drum only needs replacing after 15,000 pages, so for some customers it may last the service life of the printer. The toner will need replacing after 2000 pages, though, so working out the costs of both parts gives a print cost per page, including 0.7p for paper, of 2.41p.


This is a bit on the high side, compared with personal laser printers we’ve tested recently. The Samsung ML-3050, for example, came out at 1.66p. If you can buy toner and drum cheaper than we could find them, of course, the page cost drops.


Even with the paper tray sticking out the back, this is a neat little personal printer. It’s easy to set up and use, requires little maintenance and produces high-quality, black text print. Graphic and photographic output is not quite so good and running costs are a little higher than the norm. Overall, you should compare it with other printers in the same price bracket before making a final decision on the best machine for your needs.