Yes, you read that price correctly – the Oh by Tutondo OhL 5.1 is the sort of extravagant designer home cinema speaker system that bankers like to spend their bonuses on. It’s the brainchild of Italian company Tutondo, which hand-crafts its speakers in a factory just outside of Venice, and as you’d expect its systems are an interior designer’s dream. To those readers wondering why we’re testing out a system pushing £6k – well no-one has a pop at Top Gear for test-driving a Maserati – we all need something to aspire to. And It’s our job to find out if that price tag is justified, so without further ado let’s jump right in…


Tutondo’s systems are sold in the UK exclusively by Sound Thinking AV Limited. The name of the particular system we’re testing is the “OhL 5.1 speaker system”, so called because it features the fascinating OhL subwoofer, which also doubles as a lamp. In this package you get two coil base floorstanding speakers (OKP2G) for the front channels and three coil base bookshelf speakers (OK2G) for the rears and centre. 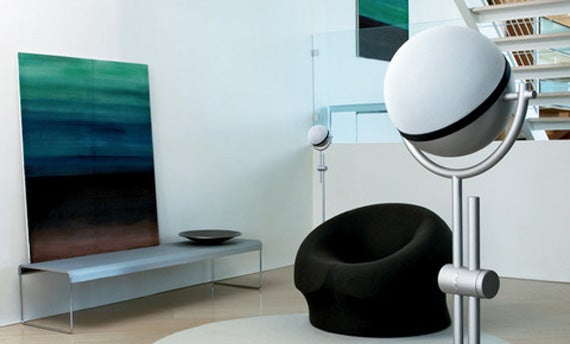 The system has a stark, futuristic look that makes you feel like you’re in an episode of Doctor Who. The key design characteristic of the Oh speakers is their spherical shape, the inspiration for which is the designers’ quest for ‘complete, natural surround sound, like a raindrop hitting water and sending out concentric ripples.’ The blurb continues: ‘The perfect sphere issues immaculate sound, free of both distortion and stationary waves, with a sharpness matched by no other shape’. Whatever. All we know is that they look absolutely gorgeous, with or without the optional domes slotted onto the front, and boast the sort of build quality that could withstand bullets. 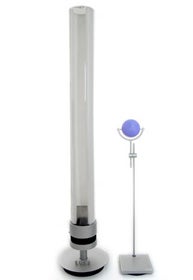 Both the floor and bookshelf stands are exceptionally well-made, with heavy, high-quality metal construction. The floor stands are thin poles set into a wide ring at the bottom, with the pre-attached speaker cable running up inside to minimise mess. Both the speakers and stands come in three different finishes – Silver, White and Black (ours were White, although the Silver finish is the nicest).


The OhL is possibly the most bonkers subwoofer we’ve ever encountered, but also one of the most practical. Outrageously stylish and completely unique, it features a bulky circular base containing the double coil 250mm woofer (with a treated paper cone and rubber surround) and 200W amplifier, which has a row of five dials lined up along the top. But on top of that sits a long, transparent tube that radiates light from the bulb fitted inside. Killing two birds with one stone in this way is a brilliant, space-saving idea but with an individual price tag of £2,795 it could be the priciest lamp you ever buy.

The driver arrangement of the spherical satellite speakers is intriguing. The 1in tweeter (ferrofluid cooled, neodymium magnet) is suspended in front of a 4.5in midrange woofer using an arm permanently attached to the frame of the speaker. This coaxial-style arrangement allows the high and mid-range frequencies to emanate from the same part of the speaker, which could help to achieve a fast, cohesive sound. In terms of spec, the satellites can handle up to 80W of power and boast a frequency range of 75Hz to 20kHz. 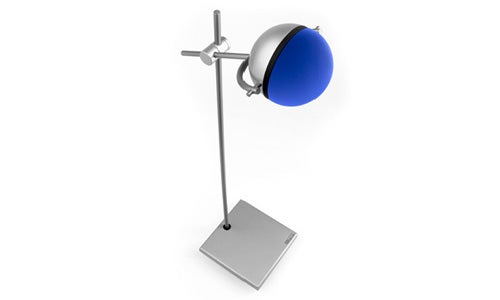 With the cables permanently attached to the back of each satellite, setup is quicker and less fiddly than a standard 5.1 system. Only the subwoofer is tricky to install, due to its hefty weight and the various pieces needed to put it together, not to mention little things like fitting the light bulb.


The sub features a row of five dials that let you tweak its performance to suit the satellites, as well as the acoustics of your room. They control volume, crossover, bass boost (up to +6dB), bass contour (35Hz, 40Hz and 50Hz) and phase shift. 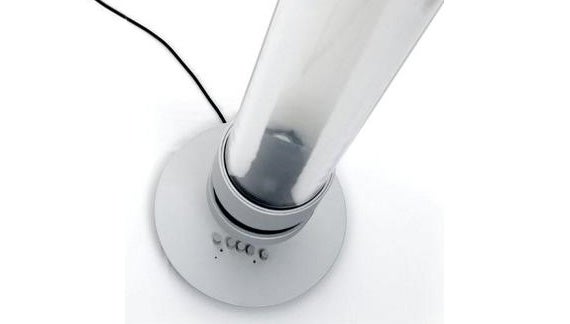 If you’re so inclined, you can personalise the system to suit your décor with optional rings that fit around the diameter of each speaker. The available colours are black, white, grey, red and blue, and they’re made of ‘soft touch’ rubber. You can also buy coloured speaker domes that slot onto the front (available in black, white, grey, orange and blue), fashioned from a fetching combination of aluminium and cloth. At £12.95 a pop for the rings and £45 for the domes, these extras aren’t cheap, but when you’ve spent over £5k on the speakers it’ll seem like peanuts.


Within the Oh range, the speakers can be bought with other types of stand – a multi-position block support (£649), which can be attached to the wall or ceiling, or a ‘high stand’ (£849) that looks a little like a retort stand from a school science lab. Both options are striking and distinctive.

The Oh by Tutondo OhL 5.1 system is much more than just a pretty face. Feed it a high-octane Blu-ray movie soundtrack like Hellboy II: The Golden Army (DTS HD Master Audio) and the sound quality is sensational. We skipped to Hellboy’s battle with the Elemental in chapter 12 and the chaos is reproduced with the sort of refinement and composure you’d expect.


The first thing that jumps out is the incredible amount of detail on offer. For example, after the Elemental has kicked the bucket, it disintegrates and causes plant life to grow over the ground and up the sides of buildings. As it does, the Oh speakers tease out the gentle fluttering of pollen on the wind, the quiet crunch of grass under foot and rustle of leaves with a level of clarity that few speakers can manage. 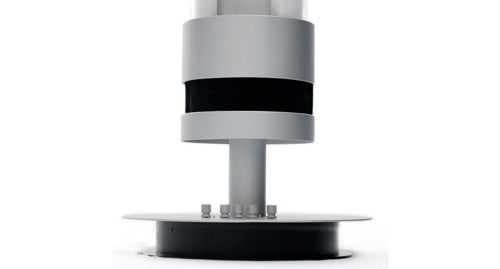 In fact, high-frequency handling through the entire scene is stunning. The sound of breaking glass and crunching metal as the Elemental crushes and stomps on cars is beautifully articulated, making every effect sound effortlessly realistic, while blasts from Hellboy’s ‘Big Baby’ gun have a proper snap behind them. That goes for both the front and rear speakers, immersing you in an expansive, detailed soundstage. 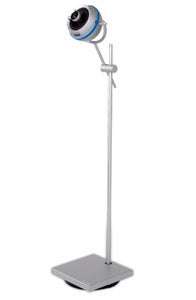 The rest of the frequency range is adeptly handled too – superb clarity in the mids allows dialogue to punch through the busiest scenes, while at the bottom end the OhL’s performance is illuminating. Rich, taut bass tones fuse cohesively with the satellites, providing a deep, powerful punch to the movie’s many combat scenes. It comes into its own during the showdown between Prince Nuada and Hellboy at the end – you feel every kick and thump, making it a potent, visceral experience. Also pleasing is how sympathetically the satellites and subwoofer work together, and of course the clockwork clanking of the Golden Army robots is wonderfully crisp.


Listening to the jazzy soul of Frank McComb’s A New Beginning CD through this system is like taking a big sip of brandy – it’s smooth, warm and intoxicating. The drums are snappy and dynamic, the Rhodes piano is rich and vibrant and McComb’s mellifluous voice is smoothly reproduced. 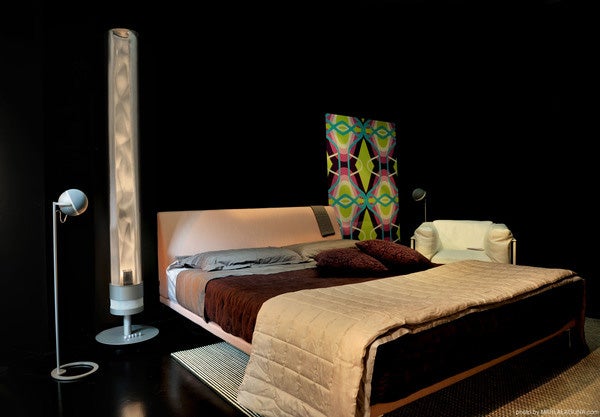 There’s no question that these are top drawer performers, expressive and articulate with movies and music, but it should be said that we have heard sound quality this good from systems costing half as much, such as the Monitor Audio Apex or the EMP Tek Impression. What you’re paying over five grand for are the super-fashionable designer looks and awesome build quality.

We know most readers don’t have the disposable cash to splash on an exuberant system like this, but should you win the lottery or sell a kidney and fancy giving the OhL a punt, then we don’t think you’d be disappointed. The classy Italian design, stunning build quality and outrageous subwoofer-come-lamp will surely blow the mind of anyone who claps eyes on them in your living room. But if decadent designer looks don’t interest you, then it’s reassuring to note that you can get similar sound quality from cheaper and more traditional-looking systems.