Microsoft certainly isn’t letting Apple have it easy. If iWork ’09 was a shot across the bows of Office for Mac 2008, Office for Mac 2011 is a full salvo aimed right at the waterline of the USS iWork ’09. It’s almost hard to believe just how much improvement Microsoft has made with the latest version of Office, bearing in mind that the previous version was a massive step forwards in and of itself.


Then again, when we’ve already seen Office 2010 for Windows prove just how good an office application suite Microsoft can produce when it puts its mind to it, we’d have been surprised if Office for Mac 2011 wasn’t a resounding success.


Some of the changes are as minor as a new set of icons and snazzier splash screens as applications load. Others are as significant as the finally realised dream of many an Office for Mac user: the death of Entourage and its replacement with a Mac version of Outlook. 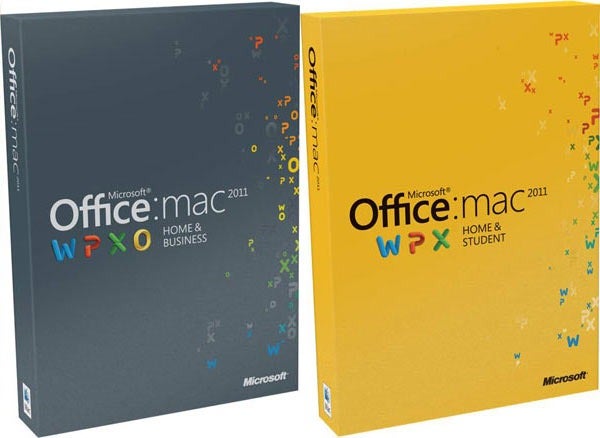 Big and small alike, these changes all combine to create what is without a doubt the slickest version of Office we’ve ever had the pleasure of using. Not only are there numerous improvements imported from Office 2010, but there are even some Mac-exclusive enhancements, not to mention some excellent integration with not only OS X itself but also a number of Apple’s own applications that give Office for Mac 2011 an appeal that’s hard to resist.


The least appealing aspect of Office is the pricing, which is significantly more than the £50ish for which iWork can be picked up. Those able to get along without an extra email client on their Macs can grab Home and Student for £89.99 with Home and Business adding Outlook for a heftier £189.99. Home and Student, and Home and Business also come in two-user and three-user versions, priced at 109.99 and 239.99 respectively.


As we know, more important than the price is what Office for Mac 2011 has to offer for it. So just what’s so fantastic about this latest version of Office? The following pages are the place to find out.

The most obvious change you’ll notice in all Office for Mac 2011 programs is the introduction of the Ribbon interface. In a concession to the knowledge that some users can’t or won’t adjust to what is, to put it bluntly, a much easier and faster way of working with your documents, this can be turned off. Left enabled as intended, however, the Ribbon does every bit as good a job of giving quick easy and context-sensitive access to the tools you’re likely to need at any given moment. 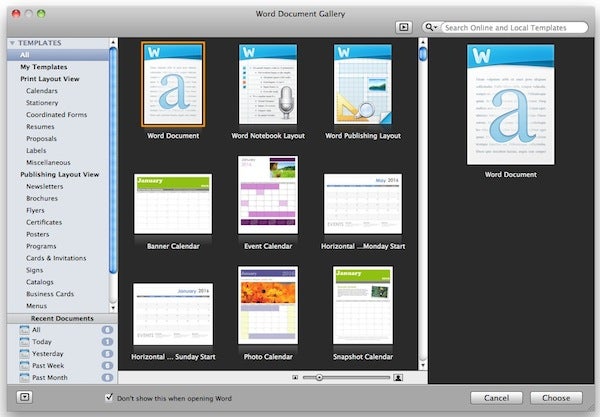 The Ribbon also makes for an improved feeling of consistency across all the Office applications. Whether you’re in Word, Excel or PowerPoint you’ll find the options relating to inserting and formatting charts logically placed under the Charts tab, for example. It’s worth mentioning, too, that the Ribbon’s appearance of Office for Mac makes life easier if you transition between Windows and OS X frequently (as some of us blasphemously do).


New to PowerPoint, Excel and Word is the Templates Gallery. Shown on start-up by default (but not if you tell it not to) this gives you not only a huge range of build-in template options, from calendars, to invoices, to curriculums vitae, but also provides an online portal where user-submitted templates can be found. Some of these are very impressive; even this early into the suites lifetime (thanks to the prolonged Beta period no doubt). If you’ve used iWork this will seem oddly familiar, but we’re not going to complain when Microsoft choses to take inspiration from good features of rival products. 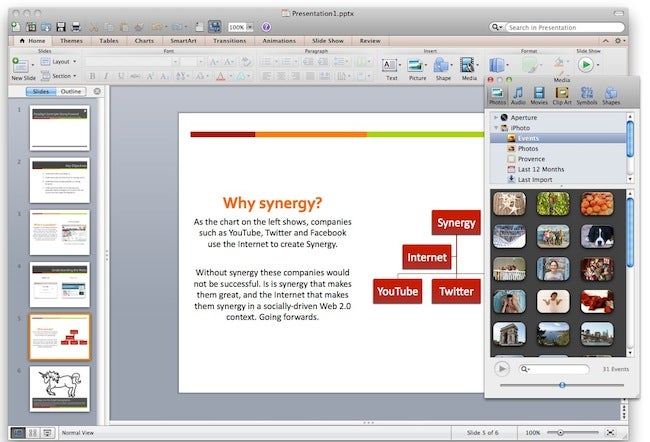 On the subject of galleries, Office for Mac 2011 features a much improved media browser, which integrates much more fully with other OS X, most notably with iLife. As well as browsing using folders, as previously, it’s now also possible to import media using Places, Faces and other ‘tags’ provided by Apple’s applications.


Word, Powerpoint, and Excel also offer limited editing options when importing images. These are pretty much limited to rotating, resizing and adjusting the colour cast of your pictures, but it should mean you won’t have to jump into a dedicated program to tweak your photos quite as often, which is a useful time saver.

Less overtly obvious if you have a recent, and thus powerful, Mac is the speed boost the latest Office offers over its predecessor. Nonetheless, applications definitely open faster and Excel in particular benefits from some much faster complex mathematical calculation speeds.


A feature being touted as new to Office 2011, but which we’ve actually already seen before is Microsoft’s suite of Office web apps. Unlike rivals, such as Google Docs, these online versions of Word, Excel and PowerPoint aren’t intended to serve as full-fledged online alternatives to Microsoft’s desktop suite, but rather as a complement; while documents retain formatting applied on the desktop, there are fewer editing options on the web versions. 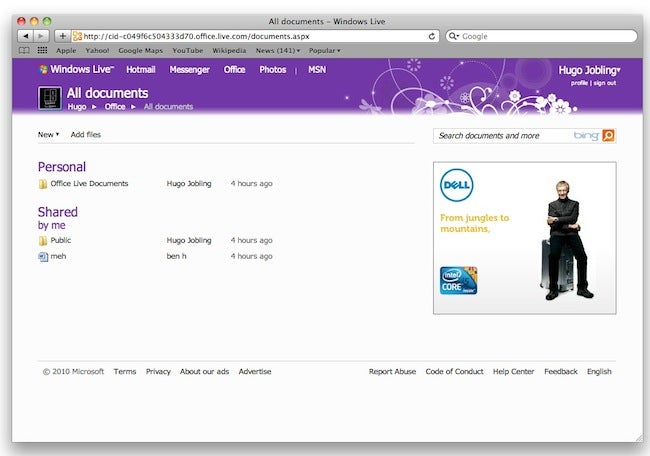 Sticking with the web theme is perhaps a more important addition to Office for Mac 2011: comprehensive web-based collaboration features. Using either a SharePoint server, if your business has one, or simply a Live account and Microsoft’s SkyDrive, it’s possible to have multiple authors work on the same document at the same time.


How much freedom to edit files is available depends on the program in use. Excel, for example, only locks users out of cells being changed by another person, whereas Word locks out entire paragraphs at once. It’s not exactly Google Wave, but it is arguably more useful. 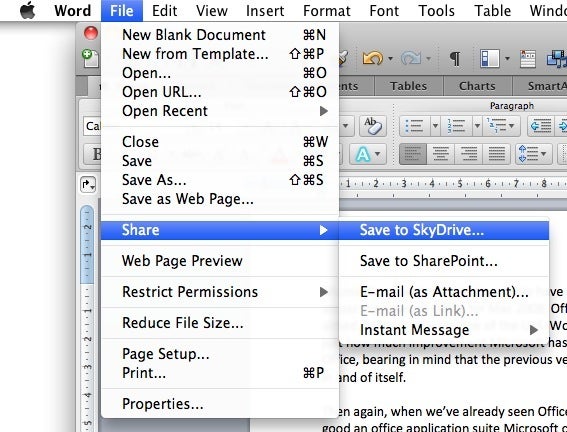 An interesting addition to Word pinched straight out of the Pages handbook is the Full Screen view. As the name suggests, and as Pages users will recognise, this put focus solely on the pages you’re currently editing, blacking out the background (by default; other colours are available) and auto-hiding the toolbar at the top of the screen. Annoyingly and inexplicably, unlike Pages’ full screen mode, there’s no word or page count, which is an odd omission.

The Publishing Layout View is useful, giving a guideline-based overview of elements in your document, enabling you to drag-and-drop bit and pieces into place easily. Combined with the Ribbon interface, this makes the business of laying out a document much easier than previously. 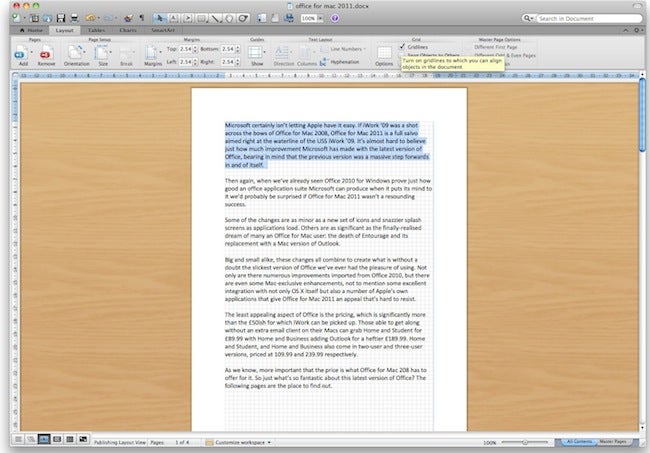 Excel benefits from the addition of a couple of favourites of ours from Office 2010 – PivotTables and SparkLines. These give you a number of powerful ways to easily represent the huge reams of data you’re likely to end up plugging into Excel. A new range of conditional formatting options also helps in that regard, with the option to add your own custom rules if the built-in pre-sets don’t suit your needs.


Possibly the most important addition to Excel Office for Mac 2011 isn’t really a new feature at all. As notably a re-addition as was its omission from Office for Mac 2008, Visual Basic for Application’s return will prove a huge boon for many. While Microsoft doesn’t guarantee complete compatibility between Office for Windows and Mac, in our testing we couldn’t find any functionality that didn’t work on both; you’ll have to be creating some seriously complicated macros to have them not work on both platforms.


PowerPoint is subject to a particularly Mac-like change in the form Dynamic Reordering. This view shows each object on the current page on its own ‘plane,’ which can then be dragged forwards or backwards, adjusting what sits in front of what. Think of it like Layers in Photoshop. 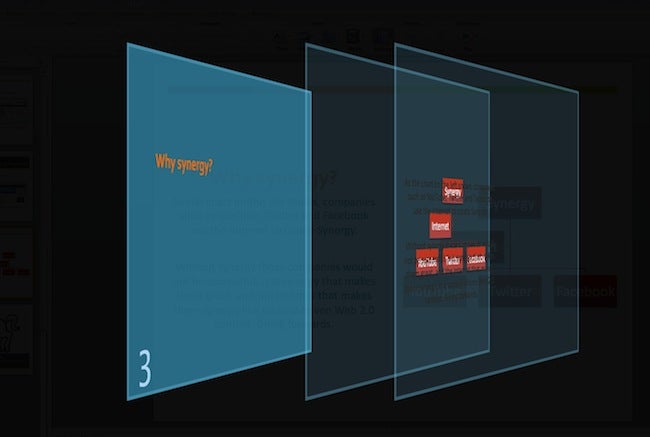 Also new to PowerPoint are the Presenter View and Broadcast Slideshow option. The former gives you an overview of your progress through a slideshow, including a timer, the current and next slides, and any notes you’ve added, while the later lets you publish a slideshow to anyone with an Internet connection, without needing to send them the slideshow itself. Not only does this mean you don’t have to hand out slides you want to keep hold of (although there’s still nothing stopping print screens), it also saves effort in ensuring everyone is on the same page as you throughout your presentation – both literally and, possibly, figuratively.

Saving what many will consider the best until last, we come to Outlook. We’ll do Entourage as much kindness as we can, and simply that its replacement with Outlook is nothing if not welcome. The most useful feature day to day is likely to be the conversation view, which works just as you’d expect, grouping emails from the same, well, conversation together for easy reading.


If you prefer, however, there are numerous other ways to group conversations, whether by particular senders, by (colour coded) categories, by date received, or using a custom combination of all the possible options. These organisation features prove particularly useful combined with Outlook 2011’s support for combined inboxes. 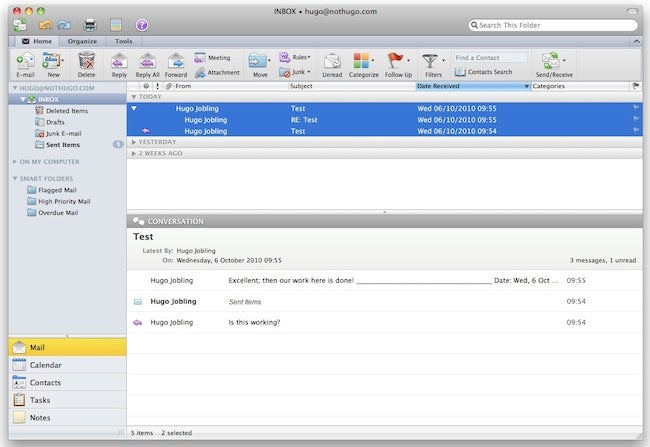 Exchange support is as comprehensive as you’d expect from a Microsoft email client, and we had no problems connecting to, and syncing our mail calendar and contacts with, an Exchange server. Of particular note was that we didn’t have to set this up manually because Outlook 2011 supports importing of PST files from other versions of Outlook – a massive improvement on Entourage which used its own file format. The transition works from Mac to PC as well as vice versa, making switching platforms a less daunting proposition. The Outlook database even interfaces with Time Machine offering recovery options for your important emails.


Outlook’s calendar is comprehensively featured, too. Obviously to get the full benefit you really want to be syncing with an Exchange server, but even so there’s enough flexibility to let you micromanage your time to an almost obscene degree. Contact syncing is noteworthy as not only does Outlook sync with Exchange, you can also sync with OS X’s built in Address Book and with Mobile Me. 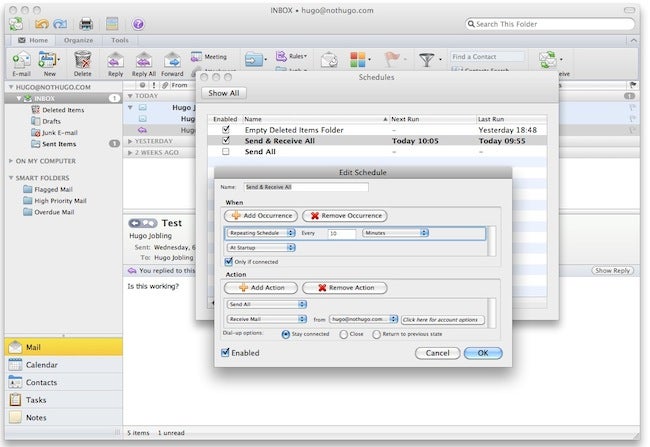 Obviously casual users aren’t likely to need the features that Outlook offers over Mail and iCal, which explains why the Home and Student version of Office for Mac 2011 doesn’t offer Outlook. But then, casual users probably won’t use 90 per cent of the features in any of Office’s applications. It would be unfair to penalise Office for being a more powerful productivity suite than most of its users really need – the point is, that power is there to be unleashed if and when needed.


If you’re just typing up the occasional letter to a relative, managing your personal finances or performing similarly basic tasks, you could easily make do with iWork, or possibly even a free alternative, such as Google Docs. But when you need more power, you’ll find yourself flagging long before Office for Mac 2011 does.