The last year or so has seen the initial trickle of SSDs turn into a full blown torrent as new devices are announced on an almost weekly basis by a whole host of manufacturers. Unfortunately, while availability has soared prices have failed to fall. As such the £340 demanded by the drive I’m looking at today still only gets you 120GB of storage. Nevertheless, if you want the ultimate in system performance then nothing but a fast SSD will do, so the OCZ Vertex series could be right up your street. 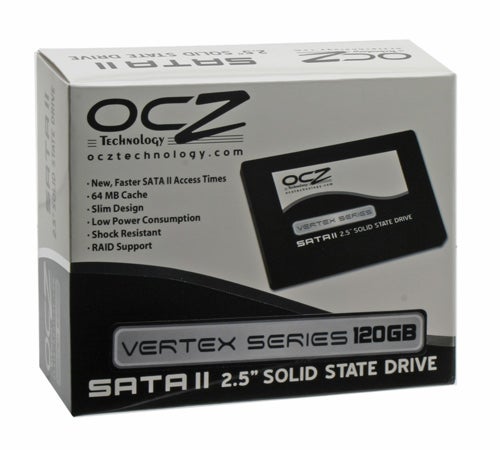 As with the OCZ Apex we looked at a few months ago, the Vertex arrives in an underwhelming slim, padded cardboard box that has nothing but the drive inside. This isn’t uncommon and some of you may not require any accessories but alternatives like Kingston’s SSDNow V Series come with extras like 2.5-to-3.5in drive mounts, mounting screws and cables.


The drive itself is a typical 2.5in SATA device so will fit in most 12in or bigger laptops and, with the help of a 2.5-to-3.5in adapter, most full size PCs as well. On the inside (something you won’t be seeing unless you want to void your warranty) are the usual banks of NAND flash memory chips and in between them and the SATA interface pins is what will make or break the Vertex series; it’s Indilinx controller chip and 64MB SDRAM cache memory chip. 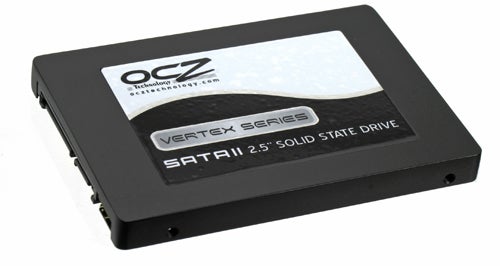 You see, up until recently, most SSDs (with the notable exception of Intel) used a slow JMicron controller chip to manage the distribution of information between the chips and the SATA interface. This meant that despite relatively speedy NAND chips to store all your information, drives exhibited slow performance due to bandwidth issues with the controller. Several solutions to this bandwidth issue have been tried including using RAID-0 controllers within the drive itself, adding cache memory, and in some cases switching to better controller chips. It’s the latter two courses that OCZ has taken with its Vertex range. So, hopefully this means the drive will give much more consistent performance than the JMicron controlled Apex series. 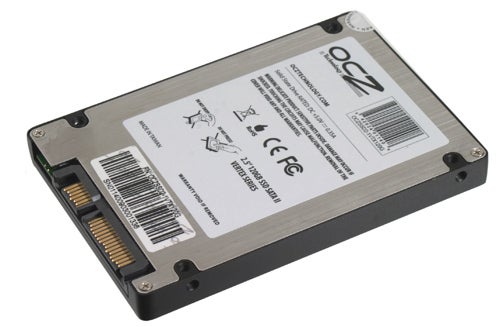 The drive is rated at up to 230MB/s read speed and up to 135MB/s write speed with a sustained write speed of 80MB/s and seek time of less than 1ms. These are impressive figures and compare very favourably with Intel’s X25-M 80GB drive, which currently holds our performance crown.


As well as improved performance, this new Indilinx controller is supposed to provide more reliable wear-levelling. This should mean the drive stands a good chance of keeping to its reported 1.5million hours MTBF.


Right! Time to put the theory to one side and take a look at how this drive performs under test conditions.

Adding the drive to our test bed as a completely blank spare, we ran the read and write tests of HDTune, the definitive hard drive benchmarking tool. In both tests the drive held up to OCZ’s claims with an average (and consistent) read speed of 219.6MB/s and write speed of 197MB/s. Access times were also reported as below 0.1ms, so all in all it looks like a pretty fast drive.

Next we loaded our hard drive test image onto the drive. This consists of an installation of Windows Vista 32-bit Home Premium, the drivers for our test motherboard and graphics card, and an installation of PCMark Vantage and Crysis. With this lot copied onto the drive we ran the HDD portion of PCMark Vantage, which comprehensively tests a drive’s performance by emulating a number of common Windows tasks like importing music into Windows Media Player and video conversion, while also including application loading times. As you can see from below, the OCZ put in an impressive performance, only narrowly missing out to Intel’s X25-M overall and comfortably beating the Apex series.

Next we ran our game loading test in which we manually time how long it takes to run through our Crysis time demo. We turn all the graphical settings down to ensure the demo runs as fast as possible, and only perform one run through so as much time as possible is spent loading and unloading the game – the bit that really tests the hard drive.

Here we find something of an anomalous result as this drive takes longer than even the Apex series to complete the demo and despite repeated tests we couldn’t get the Vertex to deliver a better performance. Frankly, we’re at a loss as to why this would be except to assume this particular test is a worse case scenario for this drive. 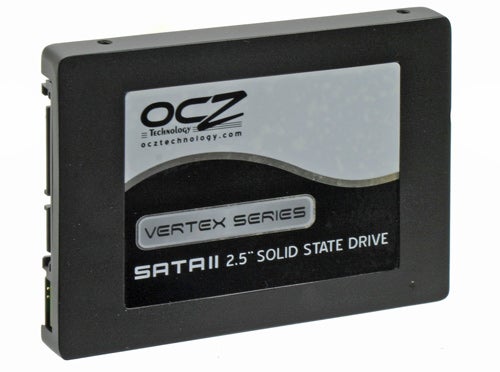 Our penultimate test is our Windows boot up and shutdown test. Here we simply manually time how long it takes for the computer to bootup, reboot, and shutdown. As with the Crysis test, the shutdown time for the Vertex drive is slower than all the other drives on test so once again we can only assume there is something about the flow of data that taxes this drive in such a way as to impact performance. An assumption we make because the startup and restart times are both markedly quicker than the other drives so there’s evidently plenty of performance on tap when circumstances are in the Vertex’s favour.

Finally, we used the system for a while; browsing the web, editing images, and gaming in order to get an idea of how the drive feels in everyday use. We can confirm that we saw no evidence of the performance dips shown in our earlier tests. Indeed, the system felt consistently snappy and responsive with programs loading quickly and no random pauses like we experienced with the Apex drives.


All told, this is a seriously fast drive that will be perfectly suited for use as the main system drive for a fast gaming PC or workstation and its price is competitive with other similarly performing solutions on the market. However, its speed and price is overkill if you just want an SSD for a simple, low-cost media center or laptop where you still want to reduce heat, noise, power consumption but don’t necessarily need all out speed.