We’ve looked at quite a few 120GB Solid State Drives (SSDs) from OCZ Technology over the last few months (in case anyone’s confused, these are actually 128GB drives which OCZ admirably lists as 120GB to avoid misleading consumers as to actual ‘usable’ capacity). Back in March there was the Apex Series, followed by the Vertex in June. Now we’re looking at the Agility Series 120GB, available for around £288.


Unlike the Vertex, which was a performance drive, the Agility is classed by OCZ as a mainstream SSD. Though you get the same three-year warranty, performance figures are lower, with 230 MB/s read, 135 MB/s write and 80 MB/s sustained write speeds compared to the Vertex’s 250, 180 and 100 MB/s. These numbers are still plenty to get excellent performance though, so let’s see how this SSD holds up. 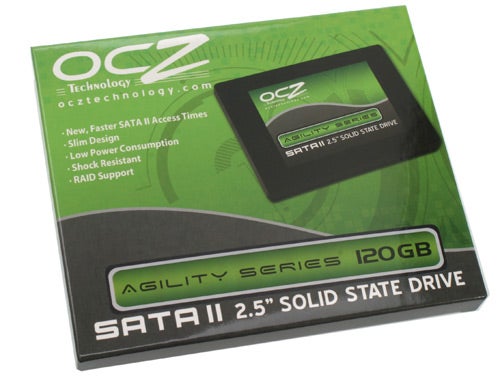 What you get in the slim package is minimal – in fact it consists just of the drive and a two-page manual. To be honest we prefer to see some screws and a 2.5in to 3.5in adapter bracket included, like with the Patriot TorqX SSD, which makes installing it into most tower cases less of a hassle. Even better is Kingston’s tactic of providing three different configurations of its drives with one just the plain drive, the second containing the above desktop mounting bracket, and the third including a 2.5inch USB drive caddy and drive cloning software that is ideal for notebook upgrades. 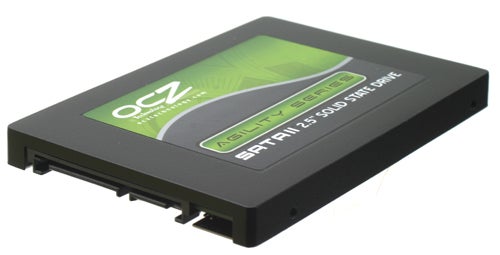 The 2.5in, 99.88 x 69.63 x 9.3mm drive is, as usual, protected by a matte black metal upper case and stainless steel base plate, and is quite light at 92 grams. Connectivity consists of SATA power and data ports. The Agility series is available in three capacities: 30GB, 60GB and the 120GB of our review sample, this being the largest size in the range. Quick warning though, don’t get the 30GB Agility based on this review, as it has significantly worse performance numbers (common with small capacity SSDs due to the controller being able to write to fewer flash modules simultaneously). We will look to get in the smaller capacity drive soon to verify what sort of a performance difference you can expect.


Speaking of the controller, we have an Indilinx chip in the driving seat, which this SSD shares with its more expensive cousins. Indilinx or Intel are really the only controllers you should consider right now, as all the others appear to suffer significant problems under long term usage. Samsung’s controller could theoretically not suffer from these issues but the drives require a firmware update, which can’t be applied by end users.

The 120GB Agility is also equipped with 64MB of cache, though it’s not rated at the same high speed as that of the Vertex. This should be plenty to avoid performance issues with initial use, though performance degradation will of course still occur (for a detailed explanation on SSD performance degradation, you should have a look at the relevant page of my TorqX review).


Despite being based on cheaper MLC rather than SLC technology, OCZ boasts a very high claimed mean time before failure (MTBF) rate of 1,500,000 hours. Since MLC flash modules are rated for about 10,000 write cycles before losing the ability to hold a charge, this is pretty impressive and suggests intelligent wear levelling on the part of the controller. Again, wear levelling is explained in more detail here, but it basically refers to the controller distributing data between as many flash cells as possible, minimizing multiple writes to any single cell over the SSD’s lifetime. 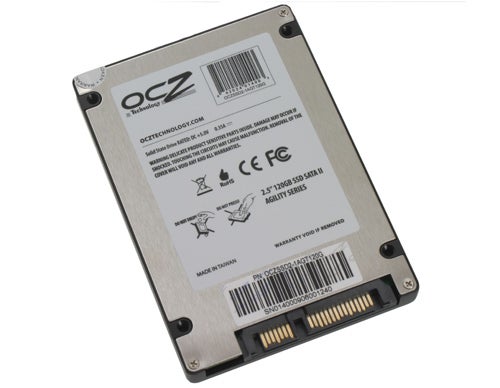 The last though hardly least part of the equation we need to cover is TRIM, or its equivalents. If you have Windows 7 and want to get an SSD, TRIM compatibility should be high on your priority list. Without referring you back to the more detailed explanation in the TorqX review again, it basically combats SSD performance degradation, ‘cleaning’ the SSD when your drive is ‘idle’ (i.e. not writing). This results in files you delete actually being removed from the drive almost immediately rather than remaining behind (until the drive is filled to its maximum capacity) as ‘invalid data’ to clutter and eventually considerably slow down your expensive purchase. TRIM-compatible firmware should be released for the entire OCZ range based on Indilinx controllers very soon.


If you still have Vista or XP, however, worry not. Again owners of Indilinx-based drives are lucky in that they get a tool that essentially fulfils the same function. In OCZ’s case this is called the Performance Tool (equivalent to Patriot’s Performance Restore Utility). The main disadvantage compared to TRIM until now was that this tool had to be user-initiated, but the new version coming out concurrently with the TRIM-enabled firmware should operate automatically whenever your SSD isn’t writing, just like its counterpart.

Let’s see how this drive holds up then. For performance testing on the OCZ Agility Series 120GB we used our usual test bed:


The SSD is initially added as an unformatted slave drive, and subjected to read and write test runs of HD Tune Pro.

In this benchmark OCZ’s new drive comes out very well indeed. In the write test the Agility is nothing too remarkable, though on average it comes in second only to the Vertex. Read speed is of course far more important for most people, as this aids things like application access and level loading times in games. Here the Agility lives up to its name, as its average read speed bests the maximum figures of all but the far more expensive Intel X25-M.

Our PCMark Vantage results confirm that this drive has impressive performance.

In fact it again beats every single competitor bar the Intel drive. The one exception is video-editing, where Patriot’s TorqX SSD wins out by the narrowest of margins. Still, going by the results so far, OCZ looks to be onto a champion here.

For the gamers out there, we load up a timedemo of Crysis at minimal detail to get an idea of how this SSD performs at loading levels.

No surprises here. This is the one scenario where a good old (albeit very fast, 10,000rpm Western-Digital VelociRaptor) moving-parts hard drive is still king, and if you can’t afford Intel there’s little difference between our latest Indilinx SSDs.


Finally we take a look at boot, restart and shutdown times of a clean Windows Vista install on our test system.

This appears to be a slight chink in the Agility’s armour, as the only area where it wins is in shutting down the computer – the least important of the three. Mind you, it still solidly trashes both the Raptor and Intel’s oddly inconsistently-performing drive, and doesn’t fall far behind its other rivals either.

Time to see if OCZ’s latest SSD is worth the cash, since at £287 it demands a good chunk of change. While in the United States the Agility matches its intended “mainstream” price point, as it’s available for a mere $270 (£162!), in rip-off Britain we pay nearly double at £287, or £333 from most stores. This puts the Agility in a somewhat tricky position, as this is getting close to the £317 of OCZ’s own higher-end 120GB Vertex. However, despite what OCZ might claim, in our tests the Vertex was by no means a clear winner, and in fact we’d probably say that overall, the Agility manages to out-manoeuvre it. While this might in part be due to newer firmware, at the very least it means this mainstream SSD is no slouch and you’ll likely be happy with its performance. 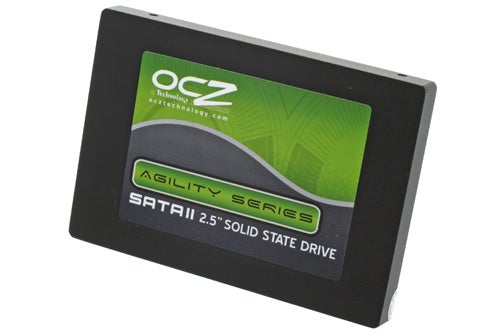 Another interesting option is Patriot’s TorqX SSD, which is available for exactly the same price. Even with our revised testing figures the Agility beats it in most scenarios, but given the relatively small margin in most real-world scenarios, many might think Patriot’s more generous bundle and truly class-leading 10-year warranty (compared to three years for OCZ’s ranges) is worth the difference.


With its 120GB Agility, OCZ has created an SSD drive that performs well for a fairly competitive price, so it’s well worth considering.