The Arc got off to a middling start in our AS SSD tests. Its 443MB/s sequential read pace is behind every other drive we’ve mentioned here, all of which got beyond 500MB/s. The Arc recovered with a sequential write result of 411MB/s – behind the SanDisk, but better than the Crucial BX100.

Its 4K read pace dropped behind all of the competition, and its 88MB/s 4K write pace wasn’t great either – better than SanDisk but behind both Crucial drives. The OCZ hit mid-table in the 4K-64 tests, too, trading blows with the other £80 products.

The Arc stumbled through the CrystalDiskMark sequential read test with a result of 438MB/s, which was behind both Crucial drives, but it improved when writing – its 430MB/s result beat the BX100 but couldn’t match the pricier MX200. The Arc was faster than the BX100 when writing 512KB files, but fell behind when reading, and it remained slower than both Crucial drives in the 4K tests. 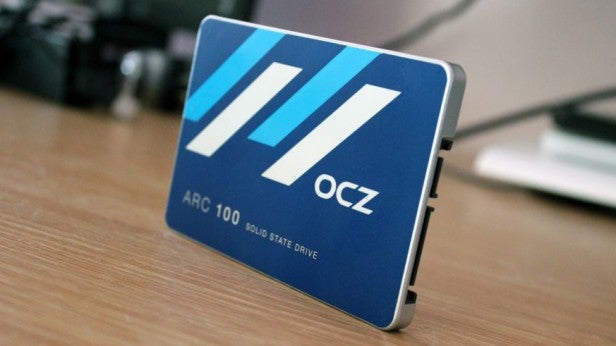 Its pace didn’t improve in the Atto benchmarks, either. Its 8KB read and write speeds of 178MB/s and 319MB/s were underwhelming: the two Crucial drives and single SanDisk effort were all faster when dealing with these small files. The Arc was the only drive we’ve mentioned here that couldn’t hit a top speed beyond 500MB/s when reading files, too – its best was 493MB/s. Its top write speed of 433MB/s wasn’t much better; faster than the BX100, but behind everything else.

The Arc’s relatively poor form continued in PC Mark 7. Here, the OCZ drive scored 5,170 points – behind the new Crucial drives, and also slower than last year’s MX100. Performance picked up in IOMeter, where the Arc scored 4,397 in the all-in-one test – ahead of the MX200 and SanDisk drives, but behind the BX100.

We’ve reviewed the 240GB version of OCZ’s latest drive, but it’s also available in 120GB and 480GB variants, with the former costing £51 and the latter arriving at £156. They’re both competitive prices, but there’s no sign of a 960GB version – a problem when all of its competitors are available at that size or the slightly larger 1TB. There are no alternative form factors, either; to get M.2 or mSATA, you’ll need to spend a little more for the Crucial MX200.

Be aware, too, of the importance of firmware updates. OCZ has made an update available for the Arc, and it’s a vital installation, as it addresses issues that surround DRAM corruption, error handling and security. The update won’t make the drive any faster, but it will improve reliability.

The Arc adheres to the 7mm form factor, which means it’ll fit inside slim laptops as well as PCs, and it’s one of the best-looking SSDs around – machined metal on the sides and a slick label that covers the entire top surface.

The three-year warranty matches the deals available with competing drives, but the box is bare – there’s no sign of the 9.5mm adapter included with rivals. 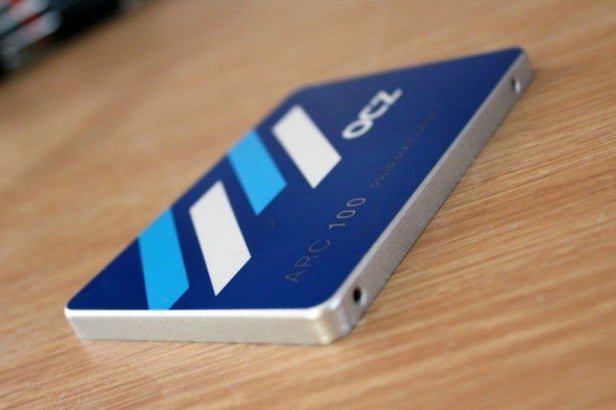 The Arc doesn’t suffer from the sluggish write speeds that hampered the BX100, but there’s a sting in the tail of its more balanced performance – at no point does it threaten the excellent read speeds we’ve recorded from the two Crucial drives or the SanDisk unit we’ve mentioned here.

It couldn’t compete consistently in small file benchmarks, either. It’s able to beat the Crucial BX100 in some tests, but Crucial’s budget drive fights back in many more – and the SanDisk and Crucial MX200 are similarly impressive in other tests too. And, while it caught up to most of its competitors in IOMeter, it fell behind again in PC Mark 7.

If you can spare £10 more than the Crucial MX200 is a better option and, if not, the SanDisk Ultra II and Crucial BX100 are both superior options. We’d only recommend this if it drops in price.

Delve into this year’s greatest smartphones, or go on an adventure with 2015’s best RPGs

The OCZ Arc proved more balanced than rivals in some tests, but it’s not able to match the raw read speeds of most of the competition – and its small file tests aren’t as impressive, either. It’ll be a decent option if the price drops, but right now its rivals offer better performance for the same amount of cash.