Every now and again a product comes along that just refuses to fit neatly into any single category. O2’s quirky Joggler is just such a device. O2 is marketing it as a kind of digital calendar that the whole family can use, but we think this is underselling it a bit. Yes, there’s a calendar function that syncs with O2’s online calendar app, but the Joggler also act as a digital photo frame, alarm clock, media streamer, digital weather station, news reader and much more. Plus it holds the promise that extra apps may be added to it over time.


We had expected the Joggler to be the type of interesting, but flaky OEM product that network operators pick up every so often. Usually these devices go out of their way to offer as many features as possible, but end up doing none of them particularly well while offering a user interface that would have been cutting edge back in the days of the Commodore 64. Some how the Joggler manages to avoid these usual pitfalls. Sure, it offers loads of features, but they’re all accessed via a very logical and easy to follow interface that also happens to be beautifully presented in an almost Apple-esque way. 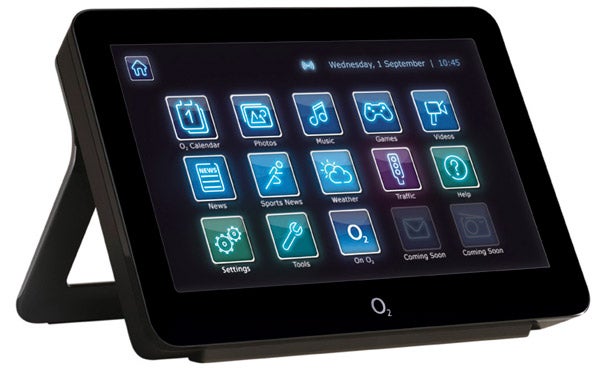 Of course, the Joggler’s usability is greatly enhanced by the fact that it’s completely driven via a rather excellent 800 x 480 touchscreen. Not only is the display bright; it also produces really vivid looking colours. And rather than relying on the traditional resistive touchscreen technology, it’s a capacitive display similar to the type used in the iPhone so it’s very responsive to finger presses. However, it’s worth noting that the interface relies totally on presses rather than swipes or multi-touch gestures, but this isn’t really a big deal.


In use the Joggler feels very responsive which is hardly surprising given that its based on a fairly feisty Intel Atom processor clocked a 1.1GHz with 1GB of memory and a cut down version of Ubuntu Linux OS.


O2’s marketing is really pushing the Joggler as a digital calendar, but we’re not convinced this is necessarily its best feature. As mentioned earlier, the calendar on the Joggler works in tandem with O2’s online calendar app so to use it you first have to register online at the O2 website and set up your calendar from there. Once you’ve created the calendar online it’s then accessible via the Joggler as long as it’s connected to the Internet via either an Ethernet cable or Wi-Fi. You can also invite other members of your family to be on the calendar buddy list so they can view it and update it as well.


The calendar is easy to use as it’s relatively straightforward to add new entries using the touchscreen. You can switch between day, week and month views and add extra graphics to especially important events. However, there’s no way to sync the Joggler with another calendar, say from Outlook, Gmail or your iPhone, which is a big shame.

As well as the calendar, the Joggler also has a photo browser, music player and video player. These can be used to play back files either from the internal 1GB of memory or via USB storage devices (there’s a USB port on the right hand edge of the device). A surprising number of file formats are catered for including MP3, Ogg Vorbis and WMA (non-DRM) for audio, and FLV, WMV, MPEG-4 H.264, Xvid and DivX files for video. It could even play back some 720p HD files we chucked at it.


Photos are quick to load and you can turn on the slideshow mode to have it gently cycle through your pictures like most digital photo frames. The music player is fairly basic, however, as it doesn’t show ID3 tags and doesn’t let you fast-forward or rewind within tracks. Nevertheless, it does have shuffle and repeat controls and moving between songs is pretty easy thanks to the touchscreen control. Video playback is very smooth, and although initially it’s shown in a window with playback controls beneath it, you can tap on the video window to make it go full screen. However, as with audio there’s no fast-forward or rewind controls, which is annoying. 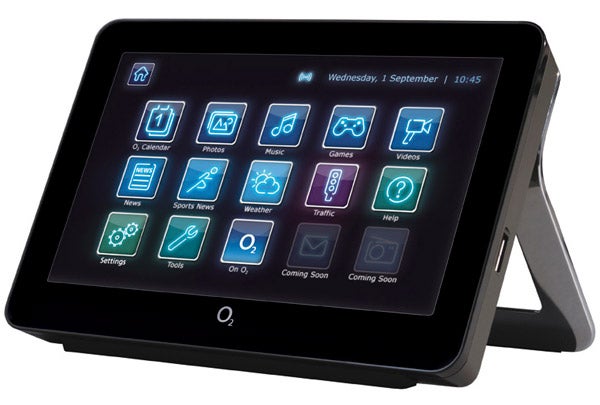 There are also news and sports news icons that let you read the top 10 stories pulled from the ”Sky News” website and the weather feature shows the forecast for the next four days complete with cute weather animations. You can also access a zoomable traffic map that shows congestion levels on the UK’s A road network using information provided by Trafficmaster.


The other major feature that’s been recently added is text messaging. Tap this icon on the screen and it takes you to your messaging inbox. There’s a contact book for storing numbers and the onscreen keyboard makes it easy to tap out messages at a reasonable speed. O2 gives 50 free text messages a month when you buy the device and the inbox constantly displays how many free messages you’ve got left. You can also text from a mobile directly to the Joggler, say if you’re running late, and the message pops up on the screen when it’s received. It’s a shame email isn’t currently supported as well, but perhaps this will be added in the future.


The Joggler’s other really cool feature is hidden away in the Tools menu. This menu is home to the alarm clock, calculator and memo pad, but more importantly also Connect and Play. Essentially, Connect and Play lets you use the Joggler as a media streamer as from here you can happily access and play files from a network share on your PC. It works brilliantly and means you can listen to your PC’s music collection (and even play tunes in the background while using other features like the news reader or calendar app) or simply catch up on those completely legal TV programs you’ve downloaded.

Despite the feast of features, there’s still room for improvement. Although there’s an icon on the main screen for Internet radio, this hasn’t been implemented yet. This is a shame as we think it’s a key feature that would greatly enhance the usefulness of the Joggler – anyone fancy an Internet radio alarm clock for the bedroom? 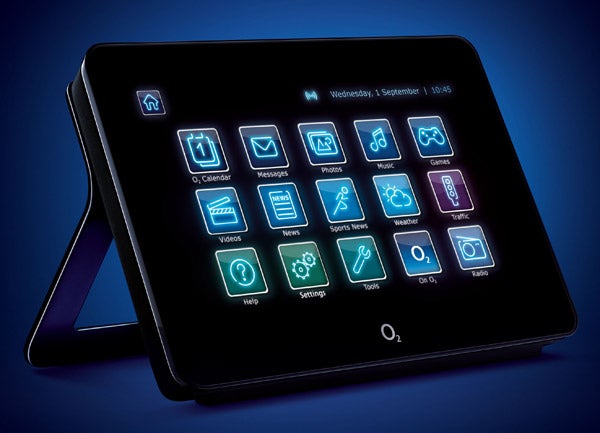 It also would have been nice to have an SD card slot so you could view pictures directly from your digital camera’s SD card rather than having to load them over the network or via the USB port. The stereo speakers are a bit on the tinny side too – think kitchen radio rather than mini Hi-Fi quality, but then again at least there is a mini jack stereo output on the rear so you can connect it to powered speakers if you like.


Furthermore, there’s a distinct feeling that the Joggler can do even more than what O2 has so far unleashed. Especially as the Joggler is really a re-branded and re-jigged version of Open Peak’s OpenFrame, and from what we can tell from OpenPeak’s website, the original has a wider selection of preloaded apps.


Given the range of features on offer, the Joggler is surprisingly cheap. You can buy it from O2 for £150 or if you’re already an O2 customer you can get it for free if you forgo an impending handset upgrade. Certainly, the device has its failings, but overall we couldn’t help liking it a lot. It’s just so easy to use and has such a neat line-up of features that it really grows on you over time.