At first glance Nokia’s N90 looks like a pretty standard clamshell phone albeit a chunky one. Weighing 173g it feels like a bit of a monster in the hand, and at 112 x 51 x 24mm it’s unlikely that you’ll slip it into a small pocket and not notice that it is there.


The N90 is a tri-band GSM and 3G handset, but its 3G capability is not the headline feature. That accolade goes to the same feature that accounts for the N90’s size – the camera lens. Nokia proudly announced at launch that the N90 would feature digital optics courtesy of Carl Zeiss, including autofocus, 20x digital zoom, and two megapixel image capture, as well as a macro mode for close-up shots. 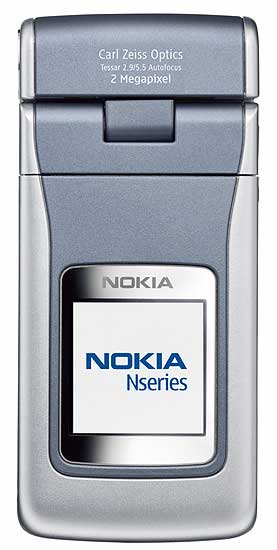 This has been all the excuse needed for Nokia to come up with a unique three section hardware design for the N90. The camera lens sits in a space at the top end of the handset. You can swivel it independently of the rest of the phone through more than 300 degrees and can do this when the clamshell is either closed or open.


If you’ve got the N90 in standby mode when you swivel, the outer screen suddenly springs into life and becomes a viewfinder while a pair of side buttons allow you to control the camera. One of these is a mini joystick which you can use to cycle through flash options, access features like the self timer, choose a shooting mode (close-up, night, sport, portrait, landscape) even change the exposure. The other button takes your photo invoking the autofocus if you half depress it, and shooting if you press it fully. 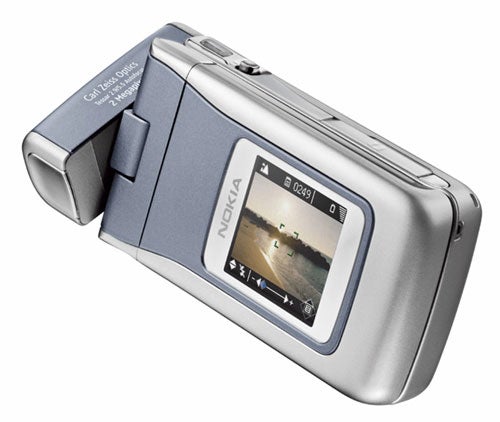 The outer display offers 128 x 128 pixels and 65 thousand colours, and performs a few other functions apart from being a viewfinder. In standby mode it shows the time and date, signal strength and battery charge level. It also tells you who is trying to call, and can display text messages. It is controlled again by that handy little side mounted joystick.

All this is before you even open up the N90, at which point you encounter both the stunning main screen and another swivel opportunity. At 352 x 416 pixels and offering 262 thousand colours in its 2.1 diagonal inches of space, the main screen really impresses – it is up there with the very best of them. When you’re using the main screen for framing stills and video, a pair of soft buttons unusually located at its top end come into play for choosing between options.


The screen section swivels through a little more than 90 degrees anticlockwise, and as soon as you move it away from its normal position, the screen turns into a viewfinder. Add in the fact that the clamshell hinge has two lock positions, one at 90 degrees and the other at approaching 180 degrees, and you’ll see that you have quite a lot of leeway in terms of how you can configure the N90 for photography of various types. 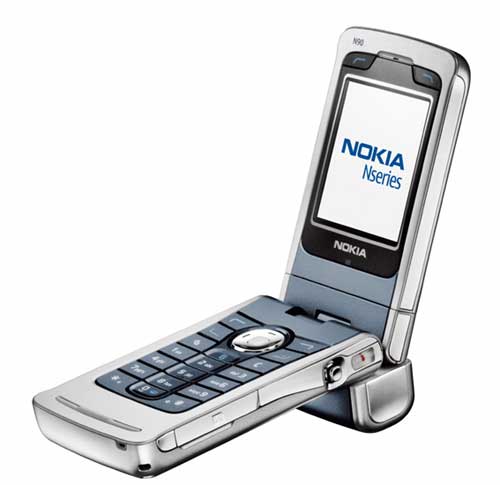 It is only by combining the various swivel options that you can get your own face into the frame to make video calls using 3G. In this configuration I felt that the N90 was a rather ungainly. I was uncomfortable holding such a large piece of kit to make video calls when out in public.


There is loads of software built in. Standard Series 60 fare such as the calendar, to do list and notes software which can synchronise with your PC, rub shoulders with a PDF viewer and the Quickoffice viewers for Word, Excel and PowerPoint for those who want to try to read such documents on the N90’s screen. There’s a voice command tool you access by pressing the camera shutter button when you are not trying to take a picture. It doesn’t need training, and made a good job of recognising the commands I threw at it.

Among the other goodies are the Real Player for video and sound clips, Movie Director for creating your own mini movies, Web browser (sites render wonderfully on the high resolution screen), voice recorder, comprehensive unit converter, Nokia’s LifeBlog client for maintaining your own Web based picture-blog, and more.


One of my favourites is the Gallery application that shows your pictures and videos in a display that offers six mini thumbnails and one larger one. You scroll through the thumbnails with the navigation button, and they move round in a circular fashion. When the one you want to view is showing as the large thumbnail, select it to blow it up to full screen. 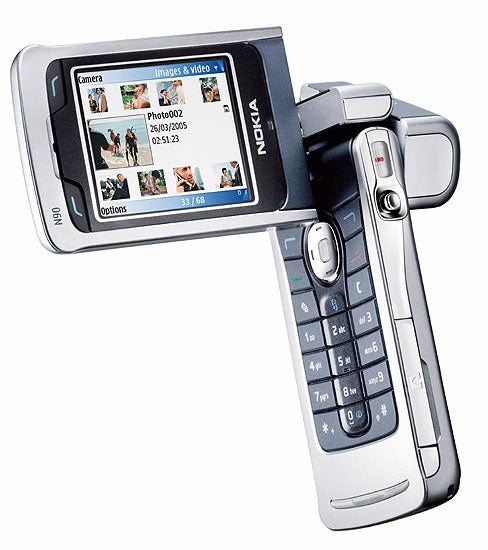 A music player does a pretty good job with MP3 and AAC formats. I found the N90’s speaker good enough to listen to for short periods and the provided headset pretty good too – just as well as Nokia’s Pop Port connector means you can’t use an alternative set.


Nokia has missed a trick when it comes to internal storage, which is extremely limited at just 31MB. You’ll eat this up pretty quickly if you shoot stills at the highest possible resolution and don’t consistently transfer them off the N90, using either Bluetooth or the provided PC Suite software. It’s also a pretty paltry amount of storage if you want to use the N90 for music playback. Nokia provides a 64MB RS-MMC card, which these days is insultingly low capacity. It sits in a slot on the right edge of the casing for easy swapping, and is protected by a hinged cover.


There is another annoyance, which will matter more to some than others, in the absence of a vibrating alert, and another in the fact that the battery life isn’t wonderful. For a 3G handset so well suited to extensive use (memory capacity notwithstanding) you should budget for daily charging.


Pricing is reasonable for such a feature-rich handset – on a £30 per month contract you can pick the N90 up for £49.99. If you go for a more expensive contract you’ll be able to pick it up for nothing.


It is pretty certain that you are going to be drawn to the N90 primarily for its imaging features, and will grow into the great screen and other software as time goes on. It’s just a pity that the handset is short on memory and doesn’t have an optical zoom component.