Mobile email. Depending on your point of view – and the demands of your boss – it’s either the oil that keeps your working day afloat or the bane of your life. Either way, for many of us, it is here to stay.


Nokia knows this and just like others has been building support for mobile email into its handsets for a considerable time. But the E61 is a step up the ladder. Part of the company’s new E series of devices, aimed squarely at mobile professionals, the E61 is the first handset from Nokia to sport a 320 x 240 pixel wide format screen, and the first to have a QWERTY keyboard built into its front fascia. 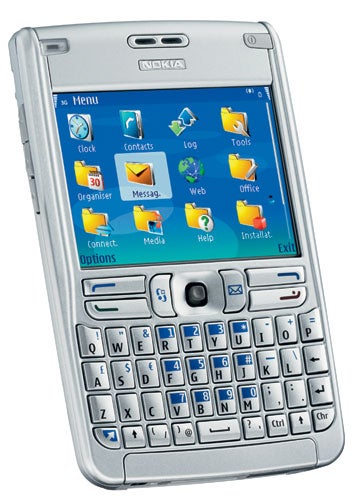 I have chosen to look at the E61 rather than others in Nokia’s E series because of its obvious resemblance to the BlackBerry and to make comparisons between the devices. Can the E61 give the BlackBerry a run for its money? I’m inclined to say it most certainly can on all three major fronts: hardware, software and general features.


Looking at the hardware first, Nokia has chosen to go for a mini joystick for moving around the screen, and this works very well indeed. Unlike the scroll wheel of a BlackBerry it allows for horizontal as well as vertical movement and with a simple ‘press to select’ mechanism it is easy to get around within and between applications.

Its location, under the screen and in the centre of the front fascia, means it can be used with either left or right thumb when the E61 is held in a hand and with a finger when the E61 is laying on a desk, making it rather more flexible than the BlackBerry scroll wheel.


The QWERTY keyboard is made up of large keys which are raised a long way from their surrounding casing. They are easy to hit one-handed or two-thumbed depending on whether you are holding the E61 in one or two hands. There is no ‘£’ sign on the keyboard, but a ‘Chr’ key on the bottom right of the keyboard calls up a character matrix which includes this symbol, and remembers the last symbol you used, even after the E61 has been powered down, so it is a dual key press to get a ‘£’ into any text.

The softmenu keys and Call and End keys are elongated making them easy to find without really looking for them very hard, and there are two further dedicated keys, sitting either side of the joystick, one of which opens up the Nokia menu while the other takes you to the messaging centre.


Overall the E61 is large and not exactly pocket friendly, but its 117 x 69.7 x 14mm and 144g of weight put it on a par with many PDAs and are not outrageous dimensions. There is no camera, either front facing or rear mounted. That means no sending of 3G video calls, but then BlackBerry devices are cameraless too and as yet there are no 3G devices available in the UK.


Moving on to software Symbian Series 60 version 3 is a nicely rounded suite, with the kinds of things business users will need such as calendar, contact management and task management present alongside Nokia’s music player and image viewer. A voice recorder is activated by a press of a button on the left edge of the casing and there is also voice command software activated by a longer press of this button. 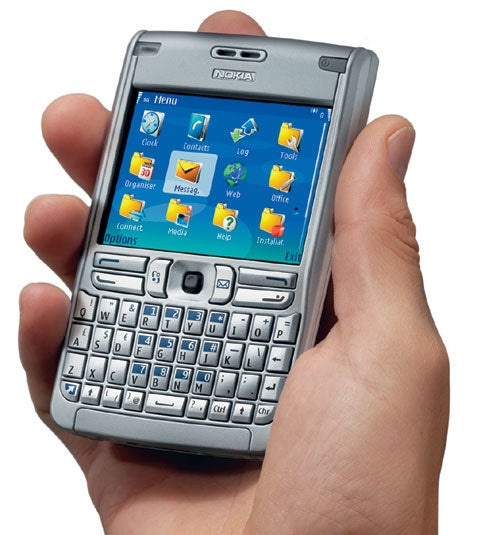 Nokia bulks out its Notes application with a set of software with which you can create and edit Word, Excel and PowerPoint presentations, as well as a utility for sending the screen contents to a projector. I haven’t a suitable projector with which to try this, but it should mean you can create a simple presentation on the move then deliver it without a notebook PC. You wouldn’t want to do too much work using the on-board software, but there is enough here for you to create or edit documents fairly effectively.


Mobile email support runs to both corporate and personal email with on the former side Intellisync Wireless Email, Visto email technology, BlackBerry Connect, GoodLink and Seven all supported and on the latter POP, IMAP and SMTP protocols catered for. I set up my gmail account and used that to test the E61.


I read Word documents, Excel spreadsheets and PowerPoint presentations sent as attachments, but sadly .rtf and PDF documents were not supported out of the box. A nice touch is that email is left on the server, and when you choose to delete it from the device you can opt to delete it from the server as well or leave it there and download in the usual way when you log on from your PC.


After the positive experience with email, the Web browser proves itself to be a bit of a let down. As with the Nokia N91 it fails to format pages to the full width of the screen. Horizontal scrolling to read Web sites should really be a thing of the past, and the first third party upgrade you are likely to want for the E61 is a Web browser that deals with that issue.

Still, in other respects the browser impresses. I like that it saves browsing history – as auto bookmarks – and that as you scroll around using the mini joystick a small cursor moves around on screen. I found this made finding and hitting links pretty efficient. Also if you scroll fast enough a small mini window opens showing a thumbnail of the current page with a box indicating the current viewing area. If you can see enough detail to identify which part of the page to home in on, this aids fast navigation around Web pages.


There are some general features the Nokia E61 sports which literally blow BlackBerry devices out of the water. The presence of Wi-Fi, Bluetooth and infrared is one. You can set the device up to ask what kind of network connection you want it to make and can check email and Web surf over a Wi-Fi network. I’ve not seen a VoIP client running on the E61, but have my eyes open for a suitable opportunity.

There is a healthy 64MB of user memory installed and support for mini SD cards so you can boost that. The card slot is on the right edge of the casing, and is hidden by the battery cover creating sleek lines on the hardware and helping to protect cards against theft. 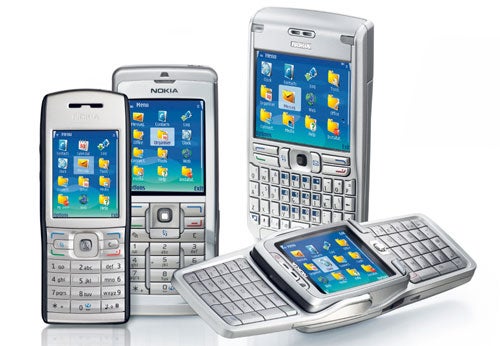 
Storing music for playback is one potential use for cards and even the most hardened business traveller must surely like to listen to the odd tune or podcast. The good news here is that playback quality is pretty impressive. The Pop-Port headset interface is the biggest let down of all where music is concerned as it means you can’t easily use your own headset. But sound quality through the provided headset is OK.


Volume through the device speaker is so loud that during testing I had to put the E61 into a drawer on the other side of the office to stop it being a distraction from working!


Finally, battery life was superb. As is usual with Nokia Series 60 version 3 handsets I set the power save time out set to the maximum available which is 30 minutes and the light time out to its maximum of 60 seconds, pushed the screen brightness to its highest and the music volume to its highest and played MP3s continuously through the loudspeaker. The result was a very impressive 14 hours 11 minutes of music.


The E61 does what you’d expect a mobile email device to do, retrieving email and catering for viewing and editing of attachments – though it could do with .rtf and PDF file support in its arsenal. Its ergonomics are very good, with a particularly strong keyboard and mini joystick. The Web browser lets it down on the software side, though. 3G, Wi-Fi, Bluetooth and infra red cater for flexible connections. I can live without a camera very easily and battery life superb.


RIM should definitely be looking over its shoulder.