Nokia can rightfully pride itself on having conquered the budget mobile phone market, even if its recent high-end touchscreen smartphones haven’t been able to compete with the best. Hoping to continue this heritage is the C5, a simple candybar handset available for under £150.

Despite a change of naming scheme, from the four-digit model numbers of old, the C5 still looks and feels very much like a classic Nokia phone. Dark grey plastic combines with chrome and brushed steel to make for an understated but generally stylish handset. It’s light, too, at just 89.3g and with dimensions of 112 x 46 x 12.3mm, it’s slim as well. A curved back and rounded edges also make it very comfortable to hold. 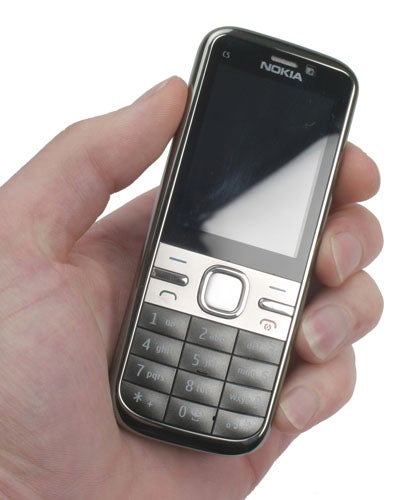 The only immediately obvious let down is the plastic screen that really shows off fingerprints and, if you’re anything like me, will pick up scratches easily. That said, the owner of the model we reviewed (Geoff Richards, our Publishing Manager) has had his for a couple of months and it has come to no harm.


Taking a tour of the phones physical features, we’re pleased to see standard headphone and microUSB sockets, so you’ll be able to use your own cans and borrowing a spare cable to charge your phone shouldn’t be a problem. Also on the top edge is Nokia’s proprietary charging socket, which is useful for the fact it charges quicker than over USB. In the box you get the proprietary charger and a USB cable, so both options are open to you. The charger itself is also rather neat as it uses a pop-up earth connector to half the usual height of the plug when in transit. 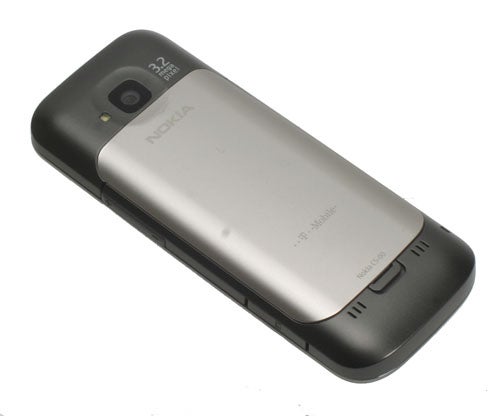 The battery cover is a nice strong stainless steel slab that pops on and off with reassuring certainty – there’s none of this prying off plastic panels like you get on so many devices. Thankfully you don’t even need to remove this to get to the microSD compartment, which is actually accessed through a slot on the right edge. It uses a hinged hard plastic door rather than a flexible push-on flap, which is a neater solution but you’ll have to be very careful when opening it as it will easily snap off. 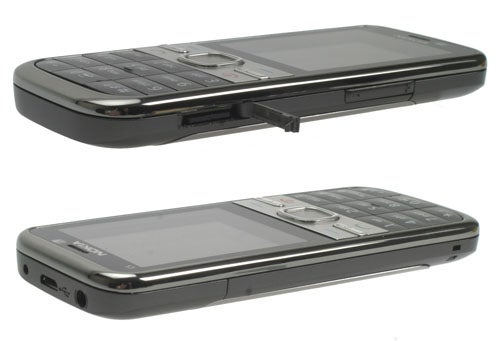 A volume rocker sits above this, and a 3.2 megapixel camera with an LED flash can be found on the back. There’s no dedicated camera button on the left edge, but it’s not much of an inconvenience to reach for the central D-pad button to take a shot. Results from the camera are adequate for the odd snap, with the LED being surprisingly powerful, but low light conditions without the flash prove rather too much for it, producing grainy and noisy pictures. Video is produced at a decent 640 x 480 resolution, but with a framerate of only 15fps it’s of limited use.

The other key problem with the camera is the main problem with this phone; its rather poor quality screen. Try and take a photo over your head or from low down and you simply can’t see what’s on-screen, the viewing angles are so bad. The relatively low maximum brightness also makes it difficult to see in bright sunlight. 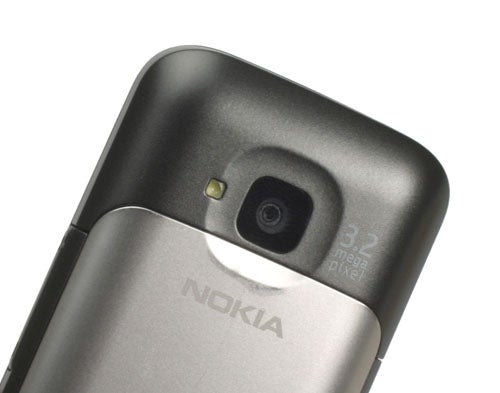 This isn’t such a dramatic problem in everyday use, particularly as you’re unlikely to be watching video or browsing the web with much regularity on a screen only 2.2-inches across. Also, given the price of this phone, it’s to be expected that the screen isn’t setting new standards in quality. Nonetheless, it’s definitely something of a let down. 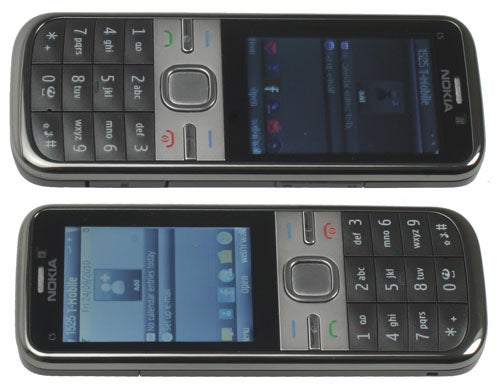 These basic candybar handsets, despite looking very similar to phones of years ago, have actually moved on a great deal in functionality. You can get a surprising amount done on this handset over and above making calls and texting.

There are apps for Facebook, Friendster, Myspace, and Youtube, as well as a web browser, OVI maps, MobileTV, a couple of surprisingly fun games, and access to Nokia’s OVI app store. The number of apps that are useful for and will work on such a modest device is limited, but you might be able to find some useful additions.


The software in general is easy enough to use. You get none of the flair of an iPhone or similar, but it’s fast and intuitive enough to use. That said, there are a few basics missing and other areas where Nokia has slipped up.

For a start, text messages aren’t arranged in conversations as is now common. Then there’s the picture viewer, which as well as insisting you view it in landscape mode is slow and awkward. Email support is also rather basic and the lack of WI-Fi means you’re limited to slower mobile data at all times. 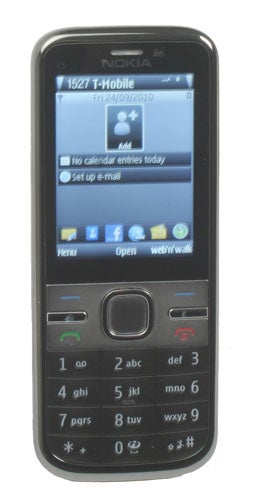 Arguably, considering how basic the phone actually is, its interface is generally a bit cluttered and overly complicated as well: something you’d certainly get over, but it makes for more of a learning curve. For instance, sending a text message to multiple people takes an inordinate number of menu options and confirmations.

Thankfully Nokia hasn’t slipped up when it comes to the basics as the main controls are large, responsive and generally easy to use. The keypad keys, though a tad wobbly, have a nice light action, making it easy to bash out texts nice and quickly.


Call quality isn’t let down significantly on any particular front. The tone isn’t quite as fulsome as the best phones, but volume and generally clarity is adequate. There’s no active noise cancelling, though, so the recipient of your call will have difficulty picking your voice out if in a noisy environment. 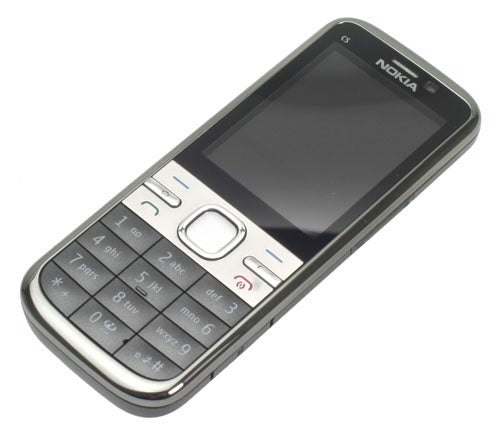 As for battery life, this is where the merits of a basic phone really shine through. You can go for a week between charges and we’ve no reason to doubt the official figures of 12 hours talk time.


The Nokia C5 certainly isn’t perfect with its slightly cluttered interface, lack of Wi-Fi, screen with poor viewing angles, and no support for nested text messages. But, if your main concern is getting a slim, light and well-built phone simply for making calls and sending texts, then it’s still a contender. 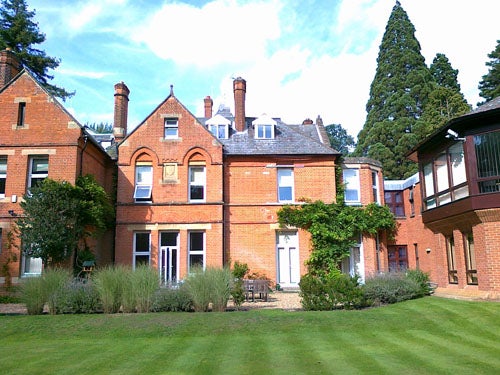 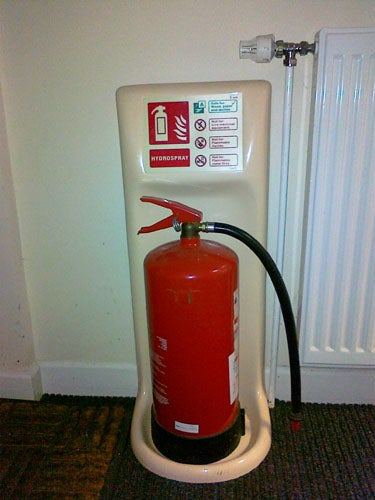 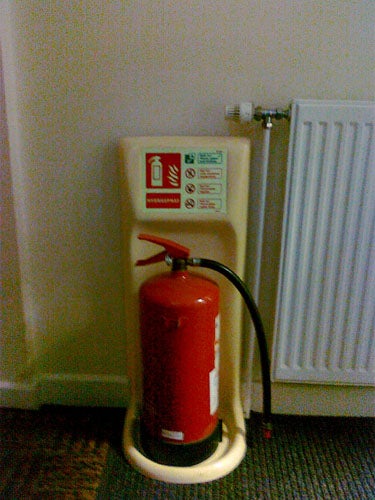