When I looked at Nokia’s 7500 Prism I was not overly impressed. That mobile had an original design constructed to make it look like a gemstone. As long as you were looking at the phone in pictures, for example on the web, the effect worked well. But the plasticky build of the handset in real life was just one of its let-downs.


Built in the same style, the quad-band 3G 7900 Prism is also primarily made of plastic though the casing is tougher and the back cover is made of aluminium. These factors help raise the overall weight from the 7500’s mere 83g to 101g and as a consequence the 7900 Prism feels like a more substantial phone in the hand.

Size-wise the two mobiles are comparable with this handset’s 112mm x 45mm x 11mm dimensions making the 7900 slightly taller and wider than the 7500, but thinner. The odd ‘diamond cut’ design is retained in the 7900 Prism and is used both front and back.


Lighting is a big feature of this mobile. In one configuration the number pad is completely devoid of markings when the handset is in standby mode. When you press a button the numbers acquire their backlight. The colour is up to you. There are 49 to choose from, and making a selection is easily done via the Settings area.


Alternatively you can set up lighting effects. These include having lights coming into play when the phone goes into standby mode. At this point the screen is darkened and just the 4, 5 and 6 keys are backlit.


Meanwhile lights on the top edge pulse slowly in and out to show that the phone is active. Their colour is affected by whatever you’ve chosen for the keypad. I can’t see the point of them to be honest. They cover a relatively small area, aren’t visible when the phone is flat on your desk, and inevitably drain power.

More importantly than the lighting effects, the triangular number keys might prove to be a little pesky. I found it took a short time to get used to them. They aren’t especially small, but there are two factors working against them.


They sit flush with each other and against the fascia which makes them difficult to define with a fingertip. Also, their arrangement as triangles with their apex pointing either upwards or downwards is disorienting. Combined, these design features meant I had to look carefully at what I was pressing while composing texts till I got used to how things were arranged. On the plus side, though, the 7500’s dreadful little mini joystick has gone in favour of a diamond shaped navigation pad and large select button. 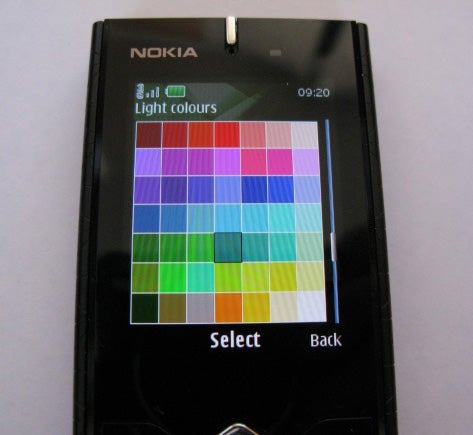 The OLED screen is impressive. With its 240 x 320 pixels crammed into a space 2.0 inches across it delivers rich, clear and sharp tones. Above it you barely notice the VGA camera for two-way video calling.


The edges of this phone are completely devoid of buttons or connectors apart from a single microUSB port. This is smaller than the standard miniUSB, and has three functions: mains power, PC cable and headphones. This sized connector has been around for a while but is far from standard, so you may find yourself carrying two mains power leads if you have other USB devices to charge on the road. 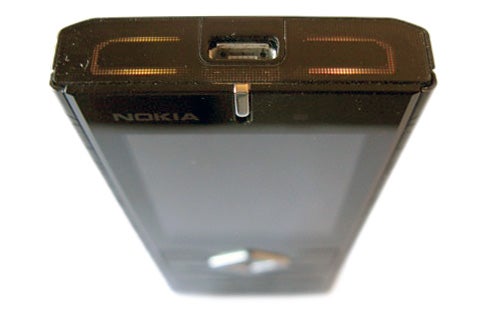 The headphones are one-piece and their mini USB connector means you are stuck with them. They aren’t too bad in terms of quality but this isn’t really a handset for the music fan. The headline 1GB of memory might draw you in, but there is no flash memory card support for easily getting tracks on and off the handset, so it is Bluetooth, download over the air or a PC link for this job. And the handset runs S40 so its music player is not as sophisticated as that of S60 handsets.


However the OLED screen helps keep battery life strong and my music playback test – running tunes continuously from the internal memory – lasted for eight hours 45 minutes, which should be enough to keep even the most tune-hungry person happy for a full day without recourse to mains power.

The camera only shoots at resolutions up to 2-megapixels which is entry level for a mobile phone these days. Outdoors it performed reasonably well. The white chair is a little bluer than it should be but I have seen worse. The daffodils were photographed quite close up and their detail has been reproduced fairly nicely. There was a small breeze causing them to move, though, and you will notice that some are a little blurred as a result.


Indoors I found shots to be grainy and dull. The coloured dish, photographed under normal household lighting is a good example of the problem. 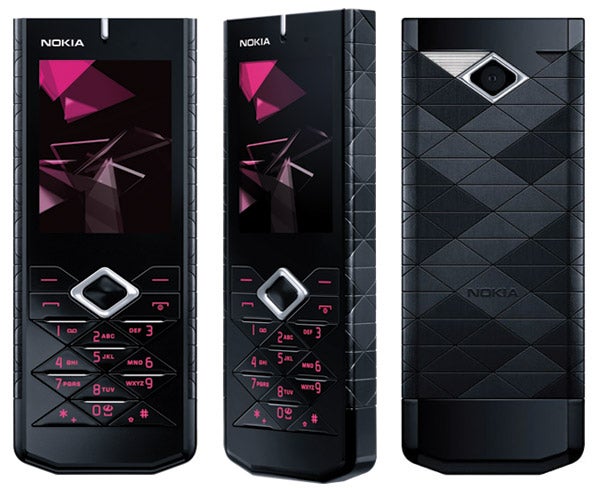 The camera includes a fairly standard array of filters, with one interesting addition. The ‘false colours’ filter changes the natural colours of an object. Take a look at the extra photo of the coloured dish to see how this works in practice. One other point of note for sharp-shooters is that images seemed to take ages to save.


As an S40 mobile the on-board features aren’t as expansive as those you could expect to see in an S60 mobile. The list of what is available in addition to what I have already mentioned includes web browsing, voice recording, alarm clock, notes maker, calculator, count down timer, stopwatch, to do list and calendar. PC synchronisation software and a cable are included. There is no FM radio (though the 7500 Prism does have one).


If you like the Prism range and your chosen source offers both the 7900 and 7500 Prisms then I’d advise going for the 7900 model as it has a wider set of features and better build quality (apart from the missing FM radio). If other handsets are on the table, though, I’d say you should weigh up the pros and cons of them and this mobile carefully. 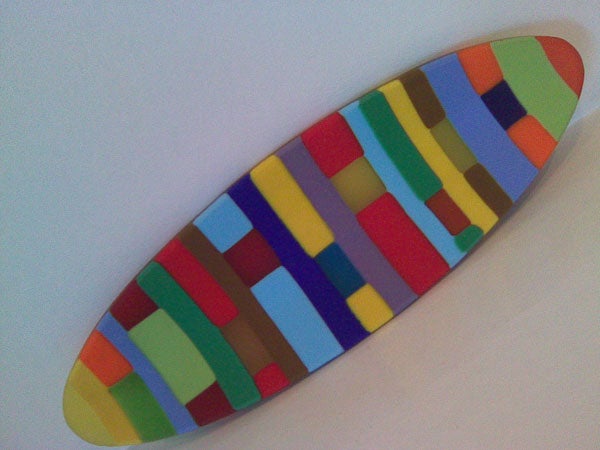 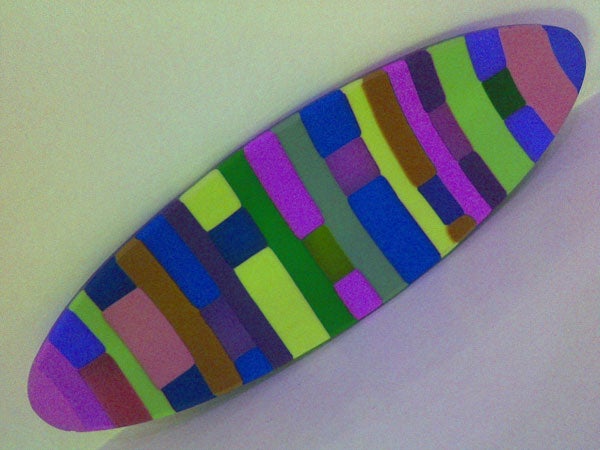 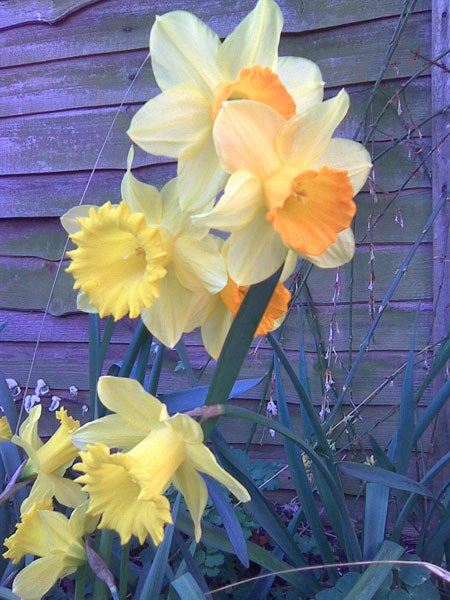 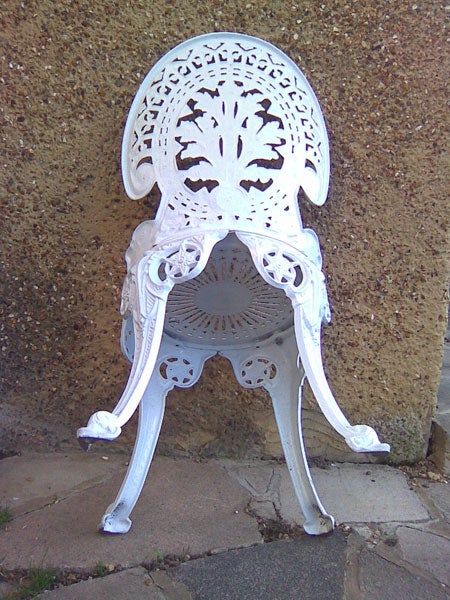