It is for such people that Nokia makes handsets like its entry level 1200, and if you are prepared to pay 15p a minute for the first five minutes of calls to landlines and mobiles on the same network and 5p after that, 35p a minute to those on other networks, 3p for texts to others on the same network and 10p for texts off network, then Virgin Mobile is the place to go for the Nokia 1200. 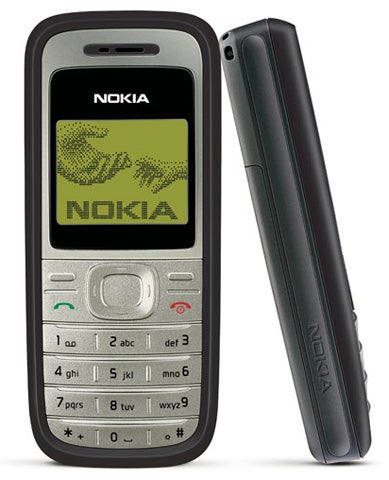 There really is no other word to use to describe this mobile than ‘basic’. The hardware design and the features are all precisely that. So go into this review with your eyes wide open on that front and you’ll get along with it fine.


What we have here is a small mobile phone which should fit into most pockets without causing a fuss. It is a bit fat at 17.5mm, but quite short at 102mm and pretty thin at 44mm. It’s also light at just 77g.


I get the impression that the physical design of this handset has been set so as not to faze the prospective user, who I judge to be as not too technologically savvy or keen to become so.


With that in mind the basic black and grey colour scheme is conservative, and the simple and minimalist button layout offers the bare basics of what a mobile phone is for. There are no side buttons at all.


The phone charges via Nokia’s small pinned mains adaptor and the jack for that, plus a 2.5mm headset socket, sit on the bottom edge of the phone. There is no headset provided with the mobile, though. All you get in its tiny box is the phone itself, the battery, charger and a user guide. Even that last item was missing from my review sample, so I can’t tell you whether it is printed or on CD – though I’d guess the former given the low-tech target user group for this mobile.

There are a couple of handy usability features which even the least technically-minded should be able to get their heads around.


You can configure the right softkey to access a series of shortcuts to things you use frequently. You simply hit the softkey then scroll through the list on offer and hit the softkey again when the one you want is highlighted. The configuration utility is linked to the softkey so you’ll have no trouble finding it when you want to change things.


Perhaps even more useful is the light on the top of the phone whose sole function is to be a torch. You can turn it on and off via the right softkey, and I have to say that it did come in handy on a number of occasions.


Meanwhile, three of the four directional buttons on the navigation pad can get you to SMS creation, the phone’s calendar and the contacts book. 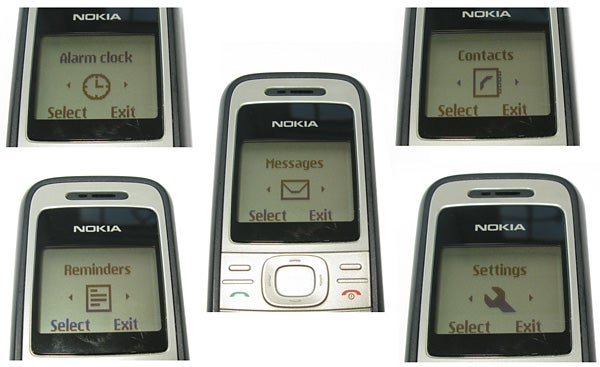 Now don’t get all smartphonishly excited about the calendar. Although this is what Nokia calls it, it is in fact just a simple a way of noting things you want to be reminded about. You can make a short note and set an aural alarm. It is probably good for birthdays or appointments but no good for anything that requires more than a few words of notes. Even if you could be bothered to T9 them up, there is no space for more than about ten words in the notes area.


The number pad and other keys lie under a rubbery covering. While this design has nothing like the panache of separate keys, I found hitting what I wanted to be unproblematic.


The navigation button is a bit more of a challenge. Its outer rim has a function as I explained earlier, but its centre is not a select key. In fact the centre has no function at all. This did catch me out a few times, but probably won’t trouble anyone choosing the Nokia 1200 as their first phone.


The screen is woeful by modern standards. It presents 96 x 68 pixels of display in a space that measures 2.8cm wide and 2.3cm deep. It is black and white, which basically means black pixels on a dark (not white) background.

The Nokia 1200 runs Series 30. That might not ring any bells, but a few years ago it was at the leading edge of Nokia user interfaces. Basically you scroll horizontally through application groups and hit the left softmenu button to delve into what’s on offer. It may be cheap for Nokia to implement because it’s on the shelf and ready to go, but I am not sure the nested menus work that well for the technophobe who might choose this phone.

The handset is dual-band GSM with no higher grade of communications capability. Given its target audience I don’t really see this as an issue. There is no camera, no Web browser, no music player, and nothing much more sophisticated than voice calling and texting on offer.


You can set up five different phonebooks each with a limit of 200 entries, which could be useful, I guess, if more than one person shares the mobile, and there is room for only 60 SMS messages in memory.


On the plus side battery life is stupendous. Nokia rate the handset as good for seven hours of talk, 390 hours on standby. I charged it and left it alone barring a few calls and some use of that torch for a full twelve days before starting to write this review, and its battery is still just about alive.


Only someone interested in making calls and nothing else is going to be remotely interested in this phone. For such people, if they can grapple with Series 30, its long battery life could be a clincher.