Let’s get this straight out of the way. In a conventional battle of the year’s big two handheld consoles, the Nintendo DS would be mincemeat for the Sony PSP. It doesn’t look as good. It doesn’t feel as good. In terms of graphics and audio performance it’s at least half a generation behind. It won’t – for the moment at least – play movies or MP3 tracks. In direct comparison, it proves that two screens aren’t necessarily better than one. If you just want a simple answer to the question “which one is best?” you can consider it answered. Go ahead and order the PSP.


Go on. It’s the right decision. It’s just that you’re kind of missing the point. You see, the DS isn’t about having the best graphics or the fastest processor, it’s just about having fun. Even the hardcore Mario fanatics can’t pretend that the DS is perfect by any stretch of the imagination, but Nintendo hasn’t lost the magic, it’s just taken a weird new direction. 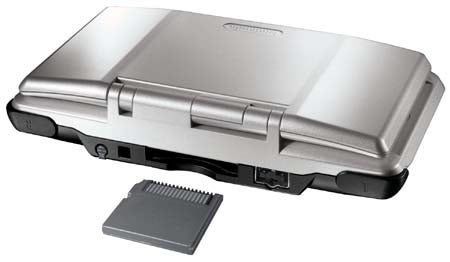 Admittedly, Nintendo hasn’t made the DS the easiest machine to love. After the slick, streamlined, pocket-sized GBA SP, the DS is a return to the cludgy old days of the first-generation GBA. It feels at least 10 per cent bigger than it ought to, and while the plastic construction feels solid enough, it’s still a little cheap and toy-like. The direction pad, four face buttons and two shoulder buttons are all within easy enough reach, but that doesn’t stop you wishing for something more slimline.


And while the two 3in, 256 x 192 resolution screens are a step-up from the GBA SP (not to mention a vast improvement on the original GBA) the PSP and most PDAs have better quality displays. On the positive side, onboard audio is better than you might expect from the twin stereo speakers, and very clear through the headphone socket at the base of the unit. Nintendo might be stretching things with talk of surround sound, but the audio capabilities are easily up there with the old Nintendo 64. 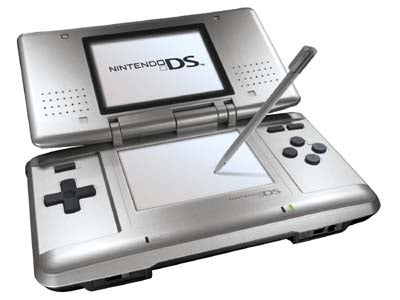 In fact, that’s a bit of a theme with the DS as a whole. If the GBA was basically the Super NES in mobile form, then this is a portable N64 with a twist. A few hours spent with Super Mario 64 DS will tell you that the ARM9 and ARM7 CPUs are perfectly capable of doing anything you would have seen from the N64’s custom hardware, and there are times when the bundled demo version of Metroid Prime: Hunters has you suspecting that it might have the potential to surpass it.

However, a few hours with Super Mario 64 DS also alerts you to the fact that, while this is a portable N64 with a twist – the addition of a touch-screen and stylus – it also has something missing: the analogue stick. Both the PSP and the Tapwave Zodiac have attempted to put an analogue controller on a handheld – with variable amounts of success – and it’s hard to imagine how Nintendo could have replicated the sheer brilliance of the N64 controller, but it has to be said that the present solutions aren’t quite working. 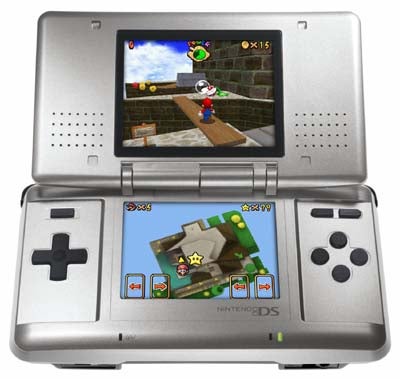 In Mario 64 DS, for instance, you’re left with three options. You can play the game with the SNES-style digital controller, pressing the B button to run, but this is a painful reminder of why the early PlayStation Mario rip-offs never worked. Digital controls and 3D platform games just shouldn’t mix. This leaves you with a choice of using an odd little ‘nub’ on the end of the DS wrist strap to turn the touch-screen into a sort-of analogue pad, or using the stylus to move Mario and the D-pad to jump and punch. Opinions differ, but I found the latter method more effective, and the whole game starts to resemble the Mario you remember.


But, it’s still not perfect. At a crucial moment, your thumb slips or you hit the edge of the screen, and suddenly Mario is squealing like a fat, Italian baby as he falls to his doom. Nintendo has sensibly widened the odd path and changed sections to make the game easier, but I’m sure the slides of Cool, Cool Mountain weren’t this perilous last time around. If this wasn’t a pixel-perfect remix of one of the best games ever, the control issue might be a disaster. As it is, it’s only a mild annoyance. 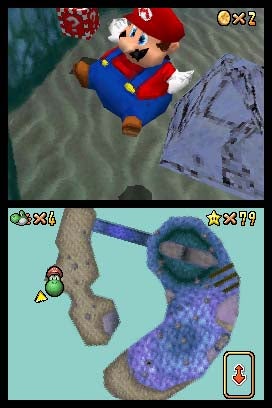 And it’s one that seems practically irrelevant once you exit the central Mario 64 adventure and start exploring the game’s other options. First up, we have the four-player battle mode. The DS includes built-in wireless networking, based on good old 802.11b technology, and it all behaves exactly as you’d hope it would. One player starts up a game, then other DS gamers can join in, downloading the necessary chunks of code even if they haven’t got the cartridge in their console. It’s simple, it’s painless, it just works. You can practically guarantee a connection up to 30ft away, given a lack of intervening walls and other interference, and the range can be even longer in some conditions. Add in the recently announced plans for online play using wireless routers, then start thinking of the possibilities of eight-player Mario Kart, and a smile should start spreading on your face.

Then come the party games. Mario 64 kicks off with eight, but you can unlock more during play, and each one is a fun-packed showcase for touch-screen controls. Whether you’re sorting bombs into black and red boxes, playing snap in Luigi’s casino or placing trampolines to save a plummeting plumber, these games don’t need any explanation. Anyone can pick them up, play them, and enjoy them. They’re ludicrously good fun and bizarrely compulsive in an “I can’t believe I’m actually wasting my time playing this” sort of way. And if these can suck up hour after hour (and they will) you only have to imagine what the DS version of WarioWare could do.


Nintendo keeps on saying that it’s trying to reach out to the audience that doesn’t play games, but it’s only when you see someone fitting that description enraptured by Mario’s mini-game antics that this really hits home. But this could also be the problem. Non-gamers may love these simple stylus games, but will they actually go out and buy a DS just to play them? 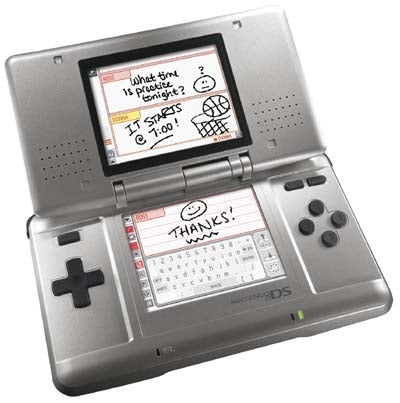 Maybe, maybe not, but their children probably will. For the younger audience, the killer app isn’t even a game but Picto-Chat: an oddball chat applet where 16 users can huddle in a wireless chatroom sending scrawled doodles and text speak. It’s the sort of thing that’s destined to spread through the nation’s schools like a virus.


The bundled demo version of Metroid Prime: Hunters might even win a few older converts. If you can imagine a multiplayer version of Metroid Prime crammed onto the N64, it’s a convincing – if slightly pixelated – 3D shooter, and it happens to have a fantastically usable control system. One uses the stylus to aim, the control pad to move and strafe, the left shoulder button to fire and some additional buttons on the touchscreen to switch weapons and jump. Link up two, and it’s a makeshift, pocket-sized LAN party (provided those pockets are the ones in your coat). 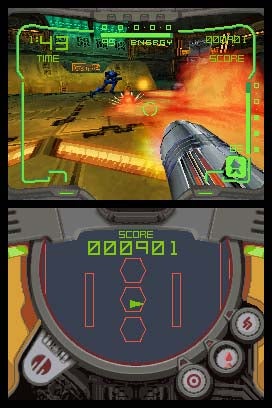 In other words, the DS could be more than just a kiddie-console, and it’s already a natural fit for RPGs and strategy games. What’s more, the stylus and touch-screen are already bringing round a range of weird games that just wouldn’t fit anywhere else (fancy an oddball, heavily stylised, scorpion slapping, candle-blowing dating game? Project Rub is for you!).


So the best and the worst thing about the DS is that Nintendo certainly isn’t playing safe. If you want the games you play on your TV in a unit that fits in your hand, then the PSP is going to blow your mind. The DS won’t do the same, but it does bring you something genuinely different. Buying one is a bit of a leap of faith, but for every person who dismisses it outright, there will be someone else who picks it up and remembers the days when games used to be a lot less complex and – perhaps – a bit more fun. Who knows? If Nintendo finds enough of them, the DS may not seem so crazy after all.


With it’s clunky design, oddball concept and inferior specs, the DS isn’t likely to win over the hardcore gamers and gadget hounds lining up to embrace the PSP, but then maybe it doesn’t need to. The old Nintendo magic hasn’t left the company yet.