Forget Brain Training, Maths Training, Sight Training and Life Coaching – we want ninja Training, and we want it now. EA’s latest Wii game promises exactly that; a training regime that will strengthen mind, body and soul until the way of the ninja is yours. Just think, within a few hours the dark arts of Ninjitsu will be a mystery no more. Your mind will be as sharp as a razor-edged Katana, your reflexes as tight as the budget of Nine Deaths of the Ninja. You’ll be harder than Chuck Norris, Sho Kosugi and Steven Seagal combined. 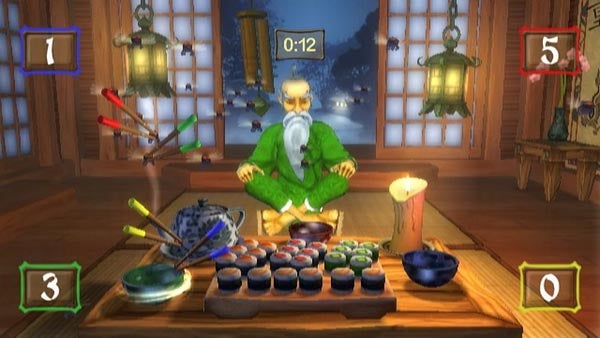 Well, maybe not. You might instead be highly skilled in a series of Wii mini-games, organised into six basic types. You’ll lob shuriken at paper targets, fight off monstrous Oni with your katana, and dispatch, erm, fruit and wooden crates with your trusty nunchucks. You might then enjoy a spot of firefly spotting, catch flies with chopsticks or tickle Koi carp instead of boring English trout. Work your way through each of the unlocked sub-games in each type and you’ll earn a jewel. Collect five of the six available jewels and you can undergo three more strenuous tests, winning a new belt if you succeed and opening up a new collection of sub-games. 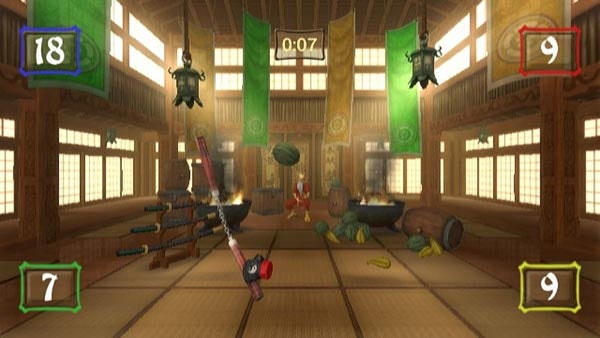 The good news is that the sub-games are surprisingly well designed, and make good use of the Wii remote. To throw shuriken, for example, you use the remote to aim a pointer at the onscreen targets, then press B to lock on and flick your wrist to throw the deadly ninja star. With the Koi catching, meanwhile, simply follow the fish with your onscreen hand, then grab them as they surface with a simultaneous pinch of the A and B buttons. Packing nunchucks? Keep the UK film censor’s least favourite weapon in motion by waving the remote in a nice figure of eight, then lash out to turn that hard-tossed crate into splintered chunks. Oni bearing down on you? Only your Katana to protect you? Just move it to the left and right to block lateral attacks, rotate it 90 degrees to stop that overhead chop, then slash out to send that oriental ogre back to hell where he belongs. 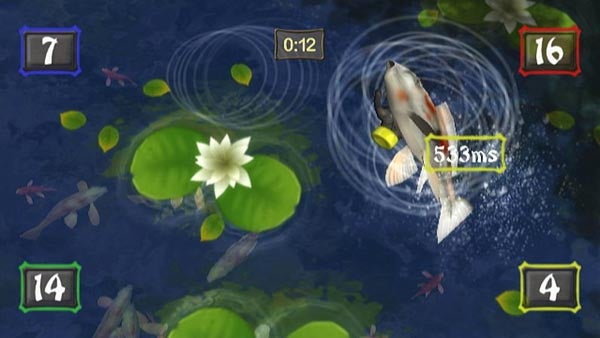 Each sub-game in the category follows the same basic theme, but throws in new wrinkles. For instance, you might start out only having to catch so many carp to succeed, but after a while you’re expected to catch only specific fish, grab them quickly while they move from one edge of the area to another, or pluck the fish from the water without scaring any. Similarly, you may be asked to shuriken every warrior in sight, or you may be told to spike three of a kind or avoid harming innocent bystanders. Whatever you’re doing, clear onscreen instructions always cue you in beforehand. 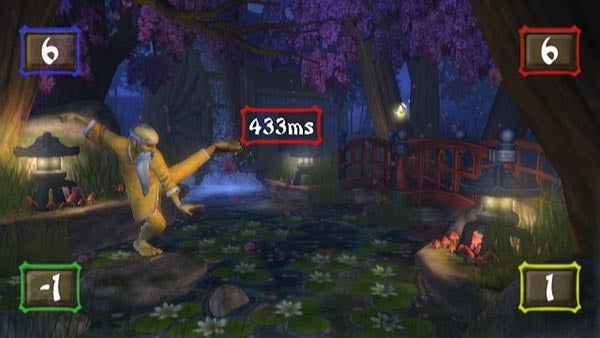 It’s all done with a certain amount of charm and atmosphere. Ninja Reflex is a game for kids big and small and it knows it, packing in enough pseudo-Confucian nonsense from your sensei to give you that authentic martial-arts movie feel, and even throwing in a slightly bizarre meditation mode for those times when you need to get your Chi back on track after a frustrating run of failures. From the moment you start a game, picking your name from a random duo of martial arts clichés – with more unlocked as you play – you’re right there in the Ninja zone. It’s also one of the best looking Wii mini-game collections around, your tests taking place in quite lovely temple locations and hosted by your nicely-animated sensei. With good music and decent if repetitive dialogue on top, Ninja Reflex doesn’t look, sound or feel like another half-assed Wii mini-game compilation. 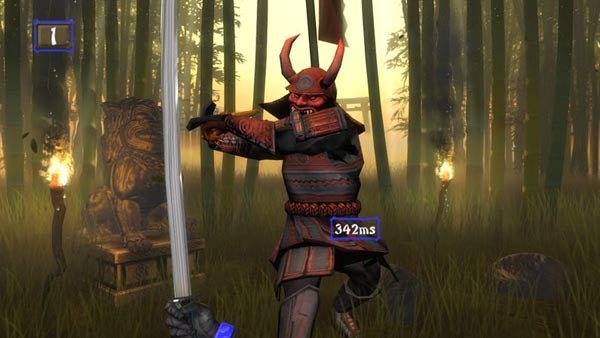 However – as is so often the case – it’s one that’s let down by a worrying lack of variety and an even more worrying lack of content. When it all comes down to it you are only getting six basic disciplines and a handful of variations on each, and it won’t be long before you’re pushing your way through the belts. To their credit, the developers obviously realised this, but their solution seems to have been to seriously ramp up the difficulty once you’re just beyond the halfway point to the extent that you hit some pretty nasty brick walls. Climb them you will, but you’ll feel disappointed that they couldn’t have provided more game types or more real variations instead. Worse, the controls aren’t always on your side. Nearly all Wii mini-game efforts suffer from this to some extent, and Ninja Reflex is actually quite good in this respect, but there’s no doubt that the tougher the game gets the more you’ll struggle with precision – or the lack of. The katana is probably the biggest single issue. It doesn’t always read your blocks properly, especially at speed, and this can be fatal when you have several oni attacking and only seconds in which to put them down. 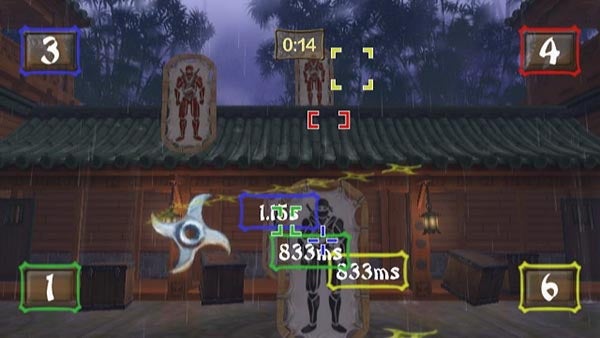 There would still be enough fun in Ninja Reflex for this not to matter if only the game had legs where it needed them most: multiplayer. Unfortunately, you only get a single offering in each discipline for two or more players, and none of them have enough excitement or depth to survive more than ten minutes at your next Wii house party. All in all, it’s hard to see you getting your money’s worth once the initial novelty has worn off. 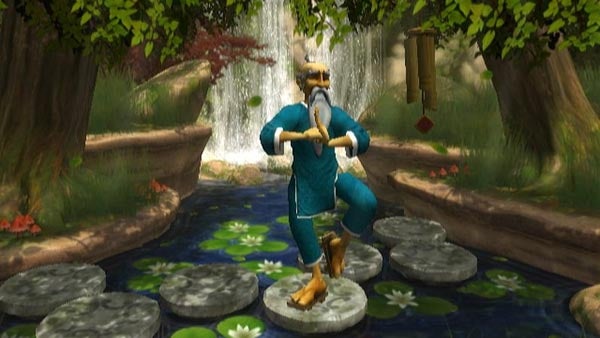 That’s a huge shame, because for the first couple of hours Ninja Reflex really does feel like one of the most entertaining Wii mini-game collections around; one that’s not just trying to be yet another Wario Ware or Rayman Raving Rabbids, but a casual gaming experience of its own. In some ways you wish they had run more with the Ninja Training concept (some of the progress reports, daily regimes and graphs seen in a Brain Training or Big Brain Academy would have worked well here), but most of the time you just wish there was a lot more of it. Should you see it for rent or in a bargain bin for under £15 then I’d definitely recommend that you give it a go. Like the equally flawed Ghost Squad, it’s a bit of a Wii guilty pleasure. Still, while Ninja Reflex sits at its full asking price it’s impossible to do so. Please, EA, bring us a sequel or a special edition, throw in double the disciplines and a decent multiplayer option, and you might just have yourself a winner. Don’t leave the world’s Ninjas half-trained – finish the job!


A hugely enjoyable workout for your inner ninja, with only a few minor flaws. Sadly, there’s just not enough of it to justify the price.