If I was going to be rude about Ninja Gaiden Sigma, I would tell you that it’s a relentlessly violent action game made by and for breast-fixated adolescent males with an obsessive interest in martial arts, fantasy, the more dubious flavours of Japanese anime and the worst kind of low-brow heavy rock. 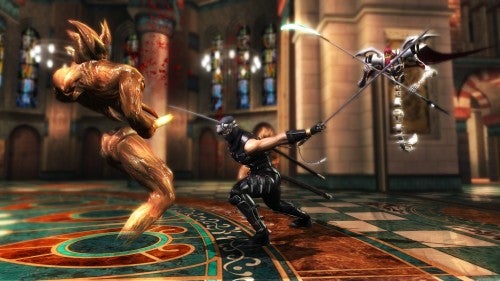 
Well, it helps that it comes at a time when the PS3 is still woefully short of decent action titles, but it also has to be said that – despite its age – Ninja Gaiden still has a powerful appeal. Some of this is visual. Ninja Gaiden was near if not the pinnacle of Xbox graphics, and then addition of enhanced HDR lighting, high-resolution textures and new water and flame effects for the PS3 port means that the game still stands up well in the age of Gears of War and MotorStorm. Early scenes feature some delightful woodland scenery and traditional Japanese architecture, and as the game goes on there’s plenty of spectacle and textural detail to be enjoyed. The original boss encounters were some of the best to emerge from anywhere outside of Capcom, and in their new PS3 livery they still make an impact today. 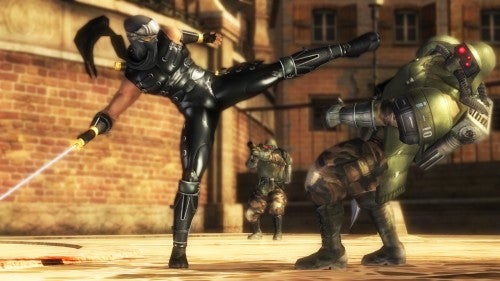 The star, however, is the animation. With Ryu Hyabusa, Team Ninja bought to life one of the most acrobatic, energetic heroes around; one who shares the Prince of Persia’s wall-running, somersaulting antics, but who outshines the prince’s swashbuckling swordplay with a deadly range of weapons and serious martial-arts expertise. Watching Ryu race, slice and dice his way around a city square or underground chamber is one of he great delights of the game. Swapping from sword to staff or nunchucks isn’t merely a tactical choice but an aesthetic one. Sometimes it’s just nicer to see monsters bludgeoned through a whirlwind of staff blows than it is to see them carved into chunks by Ryu’s newfound twin katanas.

What’s more, Team Ninja has got the feel absolutely right. The platform-jumping stuff is, for the most part, fluid and brilliantly handled, and only God of War 1 and 2 provide a close-up combat system of comparable quality. Ninja Gaiden’s mix of quickfire combos, careful blocking and acrobatic special attacks does something special: it gives you the flexibility to deal with multiple opponents in true Ninja fashion, but it doesn’t suffer button-mashing fools gladly. Perception and precision are everything, and Ninja Gaiden succeeds in the area which counts most. It gives you that authentic superhuman ninja thrill in spades. 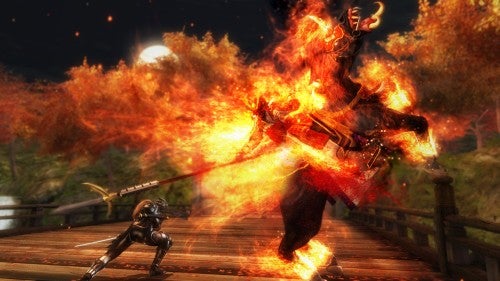 The game’s other big asset is its attitude and pacing. Like God of War, Ninja Gaiden gives you a true balls-to-the-wall action game. The plot is clichéd and moronic – the stuff of burnt villages, magic swords, revenge and spontaneous mutation – but it enables the game to throw in a wide range of traditional Japanese and peculiar modern settings, and people them with rival ninjas, outlandish creatures and genuinely brutal bosses. This is a game that throws enemies at you with a relentless enthusiasm, demanding that you carve your path through one lot, before hitting you mercilessly with another. It’s the sort of stuff the primeval, reptile parts of your brain eat up, and at its best it’s completely thrilling stuff. 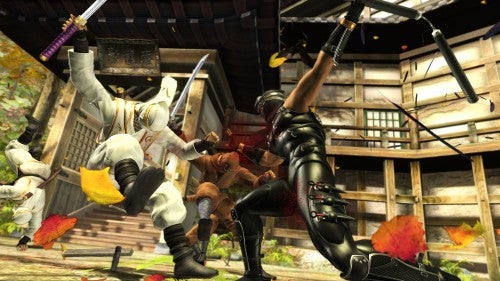 The problem is – as was always the case with Ninja Gaiden – difficulty. For all its reputation as a technical showcase, the original Ninja Gaiden’s more lasting impact has been as a byword for extreme difficulty. The original version was fiendishly tricky, to the point that some players never made it past the first boss battle. Under protest, Team Ninja’s leader, Tomonobu Itagaki, added a lower difficulty level to a remixed version, Ninja Gaiden Black, but only allowed players to take it once they’d been defeated several times in battle – and only then after a humiliating admission that they were abandoning ‘the way of the true ninja’. The fact that this mode – Ninja Dog – is significantly harsher than the normal difficulty modes of many games tells you exactly how hardcore Itagaki thinks a ‘true ninja’ is.

And despite Team Ninja’s assurances that Ninja Gaiden Sigma – the new, PlayStation 3 revamp of the game – is conceived as a Ninja Gaiden for everyone, this is still very much the same game. Most of the time, the game sits just about on the right side of challenging. Even if there are some gruesome difficulty spikes, you’re nearly always left feeling that the fault is with you and your inability to rise to the challenge. Even when the game smacks you hard against the tarmac time and time again, you’re sure that if you could just time your moves right, adjust your tactics and make every hit count, it might be your turn to triumph next time around. 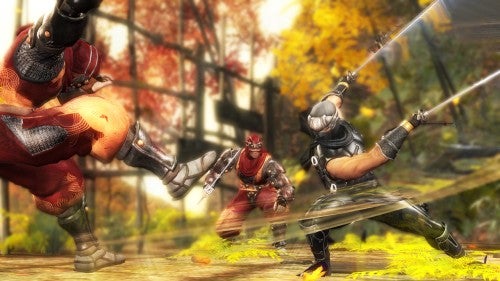 But there are definitely times when Ninja Gaiden Sigma takes this one step too far. Fighting wave after wave of aggressive heavy-hitting zombies should be an unnerving experience, not an exhausting one where your main concern is the tiresome half hour of gameplay you’ll be forced to repeat should your hero collapse. Stacking tough encounters one after another in a game without a checkpoint system is a hideous practice, while the use of respawning enemies in frequently passed-through locations should have been outlawed years ago. Changes have been made to accommodate the less proficient, with the odd added save point or a new potion and upgrade store chiselled in, but be warned. If you play games just to enjoy the experience – rather than to prove to yourself that you have the ‘L33T’ skills of the true cyber-ninja – Ninja Gaiden Sigma has several brick-wall moments where those of us with jobs, hobbies or families to contend with may be tempted to find a more rewarding use for our time. 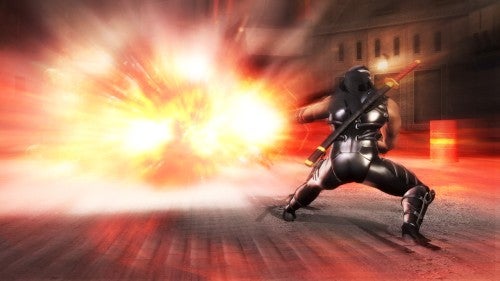 Nor are these the only times when we’ll be thinking that maybe we’re getting a little old for this kind of thing. Team Ninja clearly liked the original game’s supporting heroine, Rachel, enough to give her the starring role in a handful of levels of her own in Sigma. The unfortunate thing is that she’s actually a bit of an embarrassment: a fourteen-year-old boy’s leather-clad, ridiculously bosomed fantasy of a woman who totters around on high heels while wielding a massive hammer.

As a cut-scene lingers on a wobbling breast for the umpteenth time, you can’t help feeling that someone at Team Ninja needs to get out and meet some real girls. Worse, her slow movement and painful attack speed actually make you realise how awful Ninja Gaiden would be without the Ninja bit. In other words, the major new content introduced for the PS3 game is a series of dull, directionless and – seeing as they merely recycle enemies and environments from existing missions – utterly pointless levels. If you’ve already played Ninja Gaiden or Ninja Gaiden Black, there’s really no reason to return. 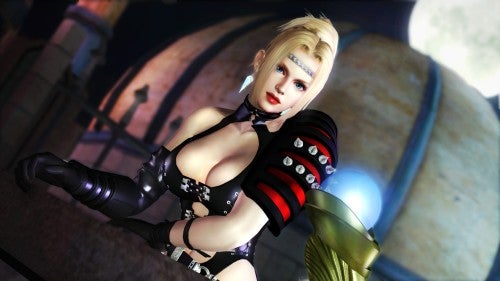 And this could be the game’s biggest flaw. It’s not that we expected Team Ninja to reinvent their game for the next-generation, but when you get beneath the new PS3 sheen, you’re left with what now seems to be a curiously old-fashioned game. Its lack of checkpointing or a sensible save system now seems archaic. The pauses between areas of a level and the restrictive, not particularly interactive environments place it in the era of Devil May Cry 3 and Prince of Persia: Warrior Within, not Assassin’s Creed or even God of War. The emphasis on long attack combos, exhausting trials of combat and hidden treasures all pay testament to the old-school Japanese action game mentality. When we were used to Devil May Cry and Onimusha, this wasn’t a problem, but things have moved on in the last two years and Ninja Gaiden’s dated structure and game mechanics now stick out like a bruised and bloody sore thumb. 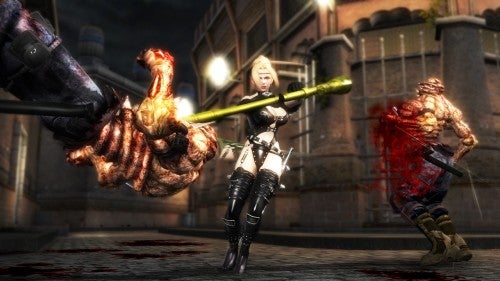 Still, if Ninja Gaiden Sigma can be a rather dated and adolescent experience at times, it’s hard to resist its gung-ho spirit or the constant, heady rush of its stylised violence. For every minute that you’re annoyed by the dated structure or frustrated by its ludicrous demands on your skill and stamina, there are ten when the action is exhilarating and the atmosphere totally immersive. For all its revamped looks it’s not a game that belongs in this generation; it’s too far away from the freeform, cinematic worlds we now hold dear. Yet it proves that when you add gorgeous graphics to the values of an older generation – breakneck pacing and a meaty challenge – the results can still hold water today.


Still beautiful, still brutal. Ninja Gaiden Sigma can’t hide its dated structure, but that doesn’t mean it’s not a close-quarters action epic to be reckoned with.