Available on Xbox 360, PS3 (reviewed)
You used to know where you were with Ninja Gaiden. In Ninja Gaiden and Ninja Gaiden 2, you were in for a bonkers, ninja-themed hack-and-slash epic, with some acrobatic platforming, copious quantities of blood spurting everywhere you looked, a mildly incoherent plot, some vicious bosses and – vitally – one of the most demanding combat systems ever found in a mainstream action game. 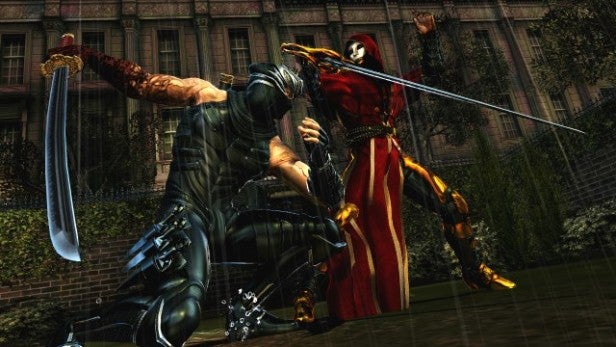 Ninja Gaiden was happy to humiliate its fans. More casual players found the initial Ninja Gaiden virtually impossible, and while the Sigma update on PS3 threw in what you might just about call an ‘easy’ mode, it only did so after telling you exactly how pitiful it thought you were. On the one hand, the difficulty level put a lot of players off, but on the other it’s what the fanbase now expects. 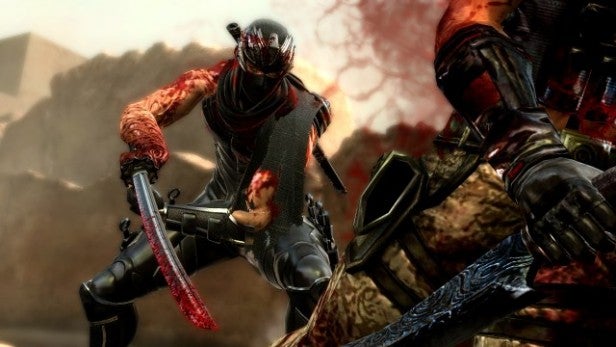 To them, Ninja Gaiden 3 will come as a terrible disappointment. With its infamous leader, Tomonobu Itagaki gone, the series’s developer, Team Ninja has made a clear decision to broaden the appeal. The result is a game with simplified combat mechanics, a weapon set that only includes swords and throwing knives (not the sickles, scythes, shuriken, claws and Tonfa sticks of previous outings), and a whole load of quick-time events. If old-school Ninja Gaiden was all about precision, timing and expert blocking and dodging before unleashing a vicious attack, then the new Ninja Gaiden is, frankly, a bit of a button masher.

As most encounters involve swarms of enemies attacking from every side and an auto lock-on that doesn’t leave a lot of room for any real strategy, the biggest decision you’ll have to use most of the time is whether to whack your foe with the triangle button (or Y) or the square button (or X). 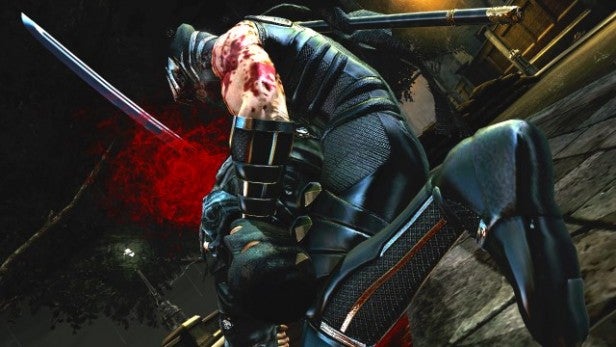 If you’re not an existing fan, this isn’t as much a disaster as the series’s hardcore fans would have you believe. Combat in Ninja Gaiden 3 still has an enjoyable rhythm, and while you rarely feel fully in control, the bloodletting is nothing if not spectacular. While the limb-lopping and decapitation of Ninja Gaiden II appears to have been cut back, there’s still some gobsmacking, Kill Bill-style hack-and-slashery going on, and when you throw in dash moves and jumps then there’s something quite satisfying about sending Ninja hero, Ryu Hayabusa, about his deadly business.

And if all you want is a thrill ride, then Ninja Gaiden 3
does have its moments. Boss battles against a massive spider-tank, a flouncing,
mask-wielding weirdo, an attack chopper and a massive cyber-dinosaur are
well-staged and enjoyable, and it’s possible to forgive an over-reliance on
quick-time-events when the effects are so grisly or impressive on the screen. The
graphics have their bad points, with many characters suffering from a dated,
plastic look, but the rich scenery and scale of the spectacle more than make
up. As much as hardcore Ninja Gaiden fans don’t want to hear it, Ninja Gaiden 3
can be an entertaining game – as long as you’re prepared to enjoy it in small
doses. 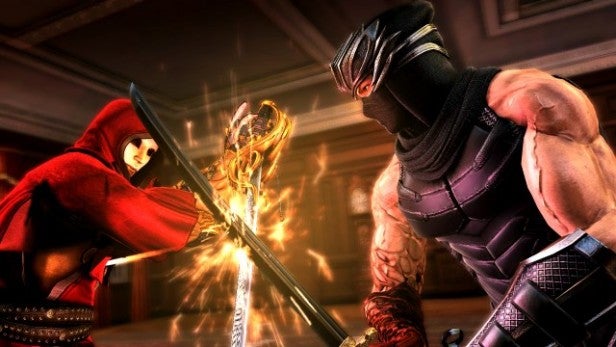 You see, the problem is that there’s not an awful lot of
variety here. The lack of alternative weapons doesn’t help, and nor does the
fact that Ryu’s special attack count has been reduced down to two: one big
dragon attack that clears the area and heals, and one that sees you stringing
together some high-damage attacks for a limited time. There aren’t enough
different types of enemies requiring different types of strategy, and when more
difficult foes do turn up, like the creepy robed sorcerers and rampaging
mutants that turn up mid-way through the game, they’re more annoying than
actually challenging. 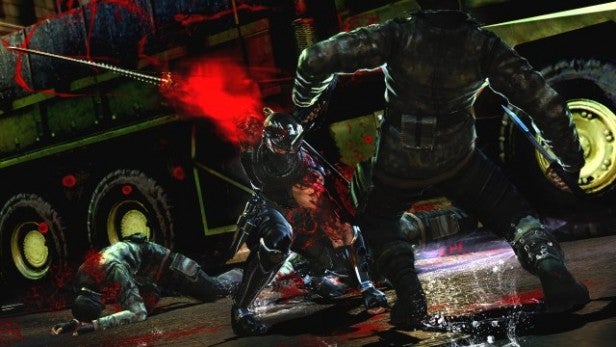 In the end, Ninja Gaiden 3 is a bit of a one-trick pony, and
the only sure way it knows to make things harder is to overwhelm you with
masses of enemies, some bearing ranged weapons, or up the toughness of those
enemies to give them more chance of wearing you down. The combat system is an
issue, but what really holds Ninja Gaiden 3 back is that, after God of War and
Bayonetta, it’s simply not inventive enough. Team Ninja should really have done
something about the vocal samples during combat, too. Once you’ve heard “Get
ready for the main course”, “Goddamn that Ninja” and other variations a few
thousand times, it really does begin to grate on your nerves.

The storyline, meanwhile, is the worst of any Ninja Gaiden
yet – a challenge when that of the second game was so incoherent that you ended
up just trying to ignore the plot. It’s obviously meant to explore the dark
side of the Ninja lifestyle and what it means to be the kind of guy who kills
20 people before breakfast, but it’s horrifically clumsy and unengaging, with numerous
dopey twists and cast members like a little, wordless waif that you’ll struggle
to care anything about. 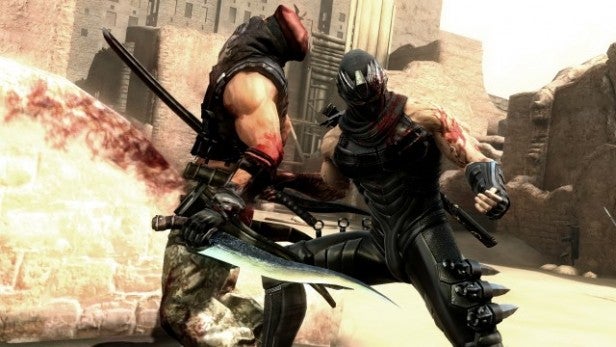 If you like the game, you might get a little extra life out
of it through a serviceable co-op challenge mode, which balances some camera
issues with some gruesome ninja laughs. PS3 owners also get Move support,
though as it’s hard to setup and virtually unworkable in practice, it’s
questionable whether this is actually a benefit at all.

In reaching out for a wider audience, Ninja Gaiden 3 does its level best to
alienate the series’s existing fans while proving too repetitive and
frustrating to acquire many new ones.  It
is more accessible and there’s enough hack-and-slash spectacle to entertain in
bite-sized chunks, but the latest Ninja Gaiden is a long way off the best.