Over the past few weeks, I’ve been working my way through a selection of the current mid-range digital SLRs, with examples from Canon, Olympus and Sony. This week I’m taking a look at the Nikon D200. Like the others, the D200 is aimed at the advanced enthusiast or semi-professional. With a 10.2 megapixel CCD, a tough weatherproof body and exceptional handling and controllability, it has a specification that will satisfy even the most demanding photographer. 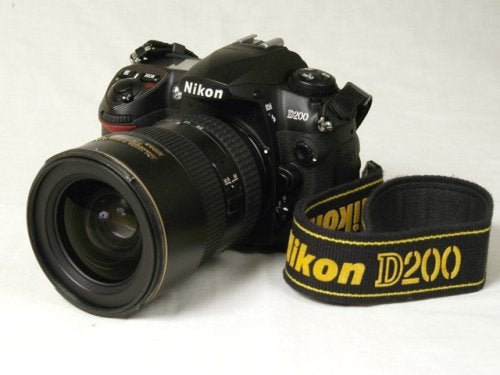 The D200 was announced in November 2005. Its name might suggest a close similarity with Nikon’s first non-professional DSLR the 6MP D100, which was launched in early 2002 and remarkably still going strong over four years later. However the D200 is much more than an update of the older model. Instead, it fits into the Nikon DSLR range above the D100 but just below the pair of professional workhorses, the D2h and D2X.


The first thing you notice about the D200 is inevitably its weight, especially when fitted with this lens. Despite the fact that Nikon’s own advertising describes it as lightweight, the camera body alone weighs a hefty 830g without the battery, and the lens weighs a further 755g. Having over three pounds of camera hanging around your neck can be quite a tiring experience on a long day’s shooting. It is 140g heavier than the Canon EOS 30D, and a whopping 280g heavier than the new Sony Alpha DSLR. 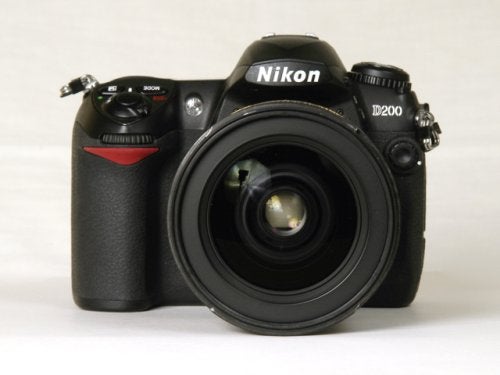 
However it’s easy to see why the camera is so bulky. It is extremely robust, and is designed to withstand rough treatment and serious outdoor use. It has a strong magnesium alloy body, and is equipped with rubber dust/moisture seals around the controls and external hatches. While not strictly speaking waterproof, the D200 should be able to withstand light showers, dust or water spray from aquatic activities. One surprising omission in this regard is the lack of a seal around the lens mount, as is found on fully professional cameras such as the Canon EOS 1DS MkII.

It is in the attention to detail that the quality of the D200’s design is most apparent, for example, in the clever viewfinder display. The focus confirmation indicator, which flashes around one of the eleven focus points, is black when shooting a bright scene, but illuminated red when shooting a dark subject. The large and highly detailed LCD information panel on the top of the camera has a user-activated backlight, that is bright enough to read the display in the dark, but not so bright that it ruins your night vision. 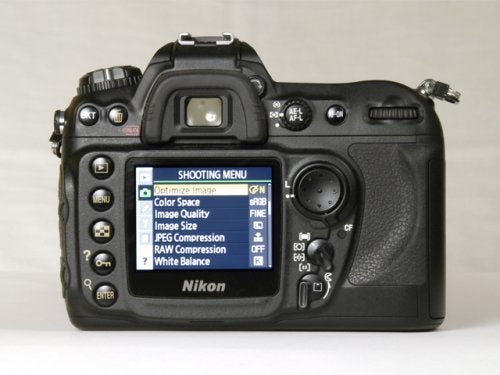 It also has that rare luxury, an X-sync socket for connecting a studio flash system, located on the left side of the camera body so the cable doesn’t get in the way when shooting.


Performance and handling are, as one might expect from a camera in this class, superb. Start-up time is effectively instantaneous, and in high-speed shooting mode it can rattle off an impressive five frames per second even in the RAW+JPEG fine mode that most serious users will prefer, with an image buffer large enough to hold 19 frames at this setting. The image buffer empties sequentially at approximately one frame per second, so as soon as the first shot has been processed and saved you can shoot another frame. 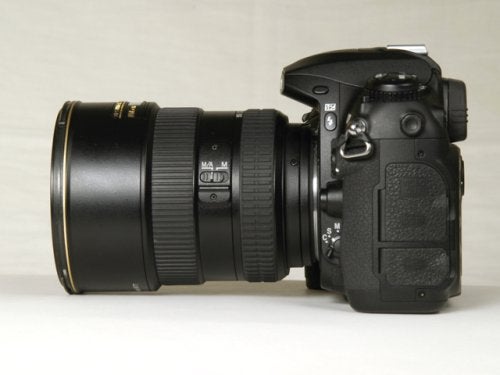 Shutter lag is also effectively zero, and the lightning-quick focusing of the expensive AF-S lens allows precise timing of even spur-of-the-moment shots. The camera’s 11-point focusing system itself was very quick and accurate, though I did notice that it seemed to have more problems focusing on low contrast subjects or in low light than I would have expected, especially considering the very bright AF illuminator with which the camera is equipped. However no other reviewers have mentioned this, so maybe it’s just me.


The large 2.5in LCD monitor is decently sharp at 230,000 pixels, and is bright enough to see in sunlight.


The D200 comes with Nikon’s new 7.4V 1500mAh EL3e lithium-ion battery, which is claimed to provide up to 1800 shots on a full charge. I’m not at all convinced about the veracity of that claim, because starting with a full battery I took approximately 250 shots with it, mostly in RAW+JPEG mode and hardly using the flash at all, over the course of five days, by which time the five-segment battery level indicator was down to 1 segment. 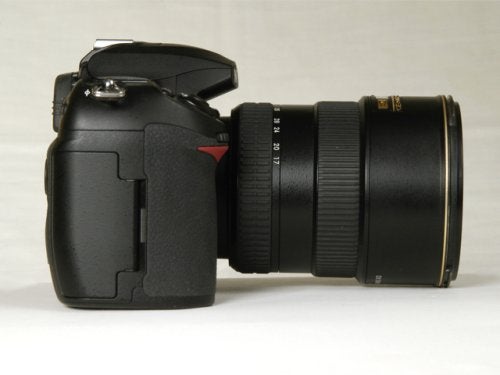 The D200 is also something of a memory hog. With JPEG files of approximately 4.5MB and RAW files of nearly 16MB, in RAW+JPEG fine mode a freshly formatted 1GB CompactFlash card only provides enough room for 39 shots. Shooting in only JPEG fine mode will fill it in 112 shots.

The excellent control layout provides a very high level of control over all shooting functions. Both of the command dials, the D-pad and the special function button on the front of the camera can be programmed by the user with a wide range of operations, while the most frequently used settings of quality, ISO, white balance and drive mode are controlled by the large dial on the top left of the body. 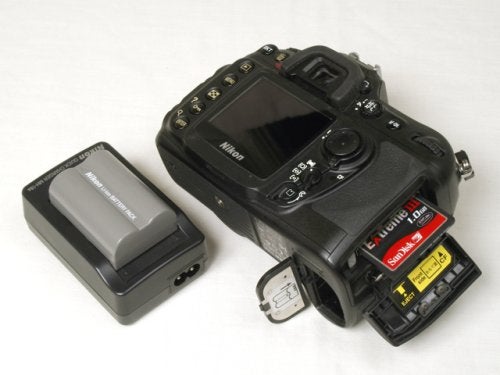 There is a degree of colour and image processing control available onboard, but for a camera in this class it is surprisingly restricted. The default JPEG setting is very soft, while the pre-set vivid and more-vivid setting are over-sharpened, over saturated and rather harsh. There is a custom setting available, but again the available options are quite restricted. The best option is of course to shoot in RAW mode and then process the picture after shooting, but the supplied RAW conversion software provides virtually no control at all. Converting RAW images using Adobe Photoshop CS2 with its camera RAW plug-in showed just how much detail it was possible to get out of the pictures, and produced excellent results. If you haven’t got Photoshop you’ll have a hard time getting the best out of this camera, but that best is very good. 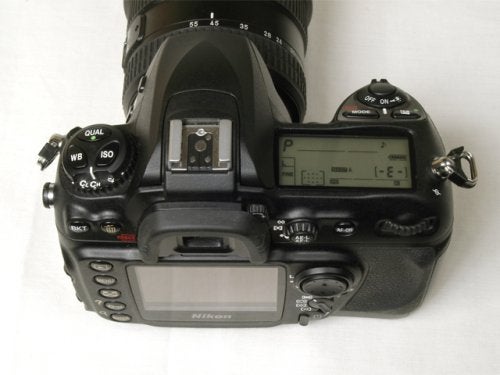 Other than that, picture quality was generally excellent, with superb dynamic range and precisely accurate exposure. Image noise control was good from 100-400 ISO, but getting rather shaky towards 800, and quite bad at 1600. There is also the option to go up to 3200 ISO in high-speed mode, but the results were very poor.


As to the crucial question of how it compares to the new Sony Alpha, which uses the same Sony-made 10.2MP APS CCD, it’s tricky one. The Sony is certainly a lot more accessible for the less experienced user, and is of course a lot cheaper and considerably lighter. The D200 however has the edge on build quality, performance and robust durability. As for image quality, I’m still waiting for the Sony RAW processing software, so a conclusive analysis will have to wait, but for camera-processed JPEG images I’d have to give it to the Sony Alpha for sharpness, dynamic range, colour reproduction and image noise control.


The D200 plugs a wide gap in Nikon’s DSLR range, and provides a bridge between the consumer-oriented D50, D70 and venerable D100, and the giddy heights of the D2x and D2h. It is big, heavy and expensive, but it provides the kind of build quality and performance that the serious amateur or semi-professional will be looking for. The lack of in-camera processing control is surprising, but with the right RAW conversion software it can produce truly stunning results. 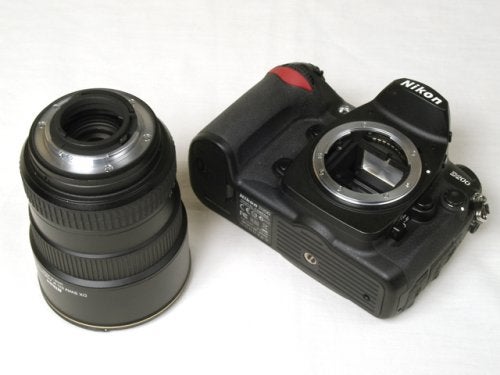 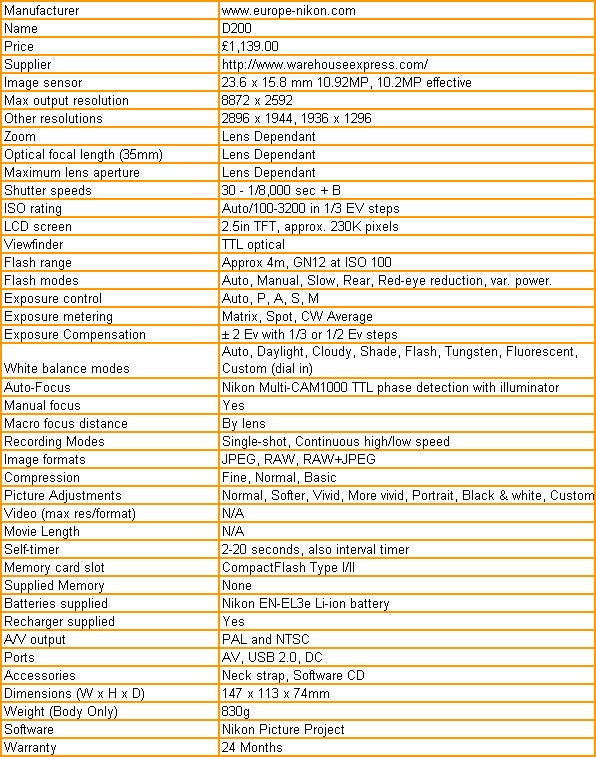 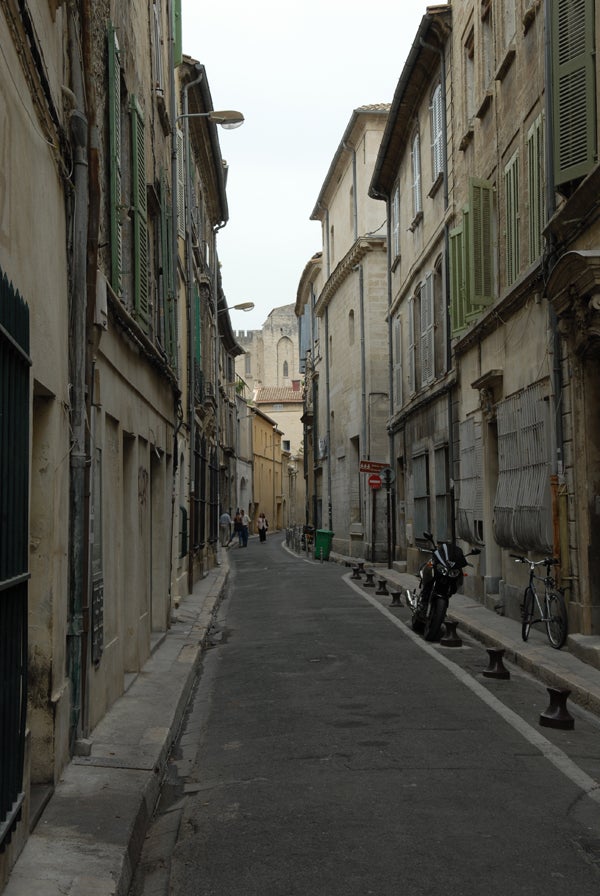 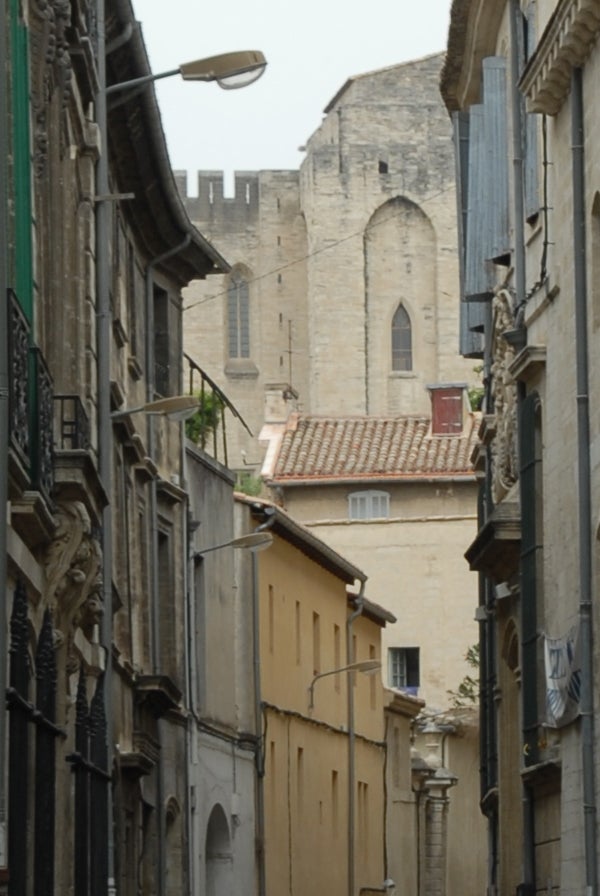 At the minimum sensitivity setting, as one might expect the image is very smooth and noise-free, with plenty of fine detail even in JPEG mode. 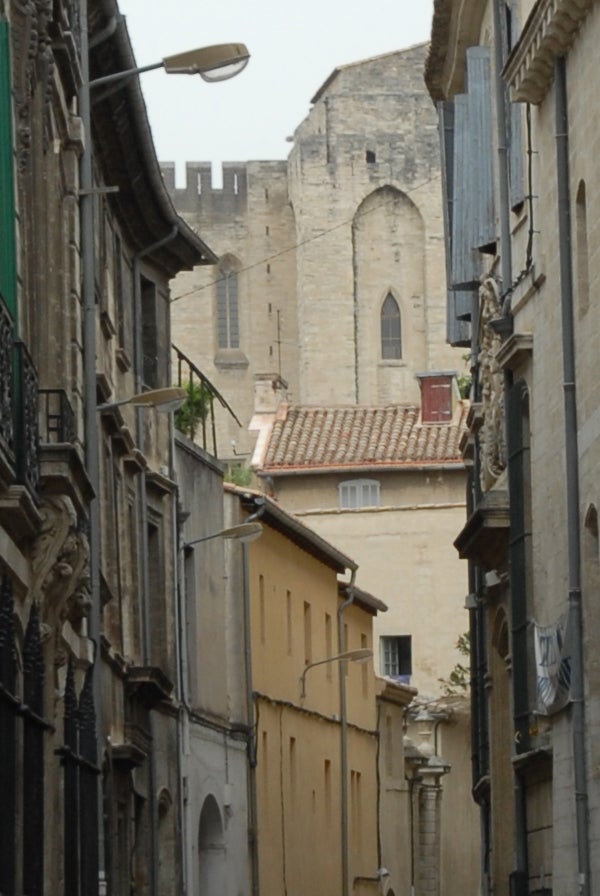 Worryingly, a tiny trace of mid-tone image noise is visible at 200, although it barely affects image quality, and colour rendition and detail are still very good. 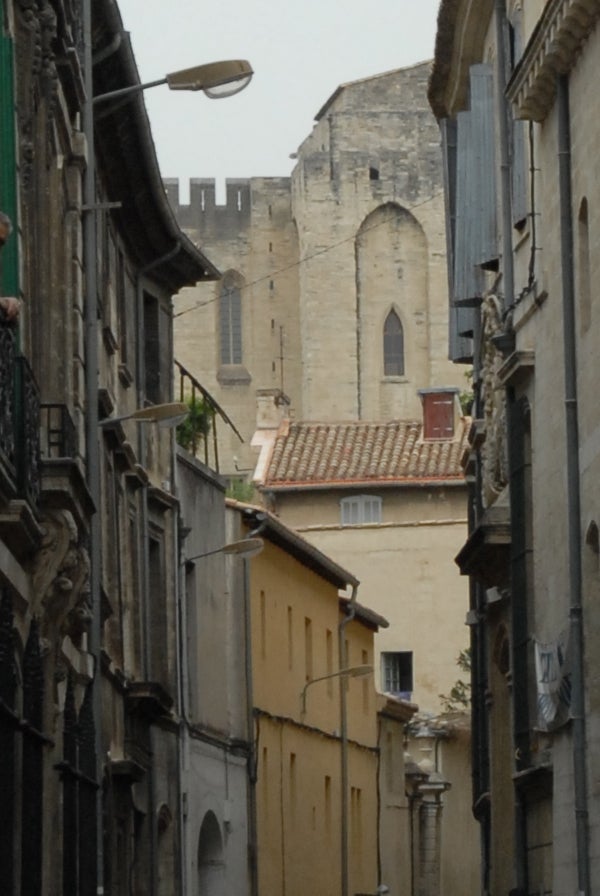 Progressively more noise at 400 ISO, although it is still very well controlled, and is still restricted to the mid-tone areas. 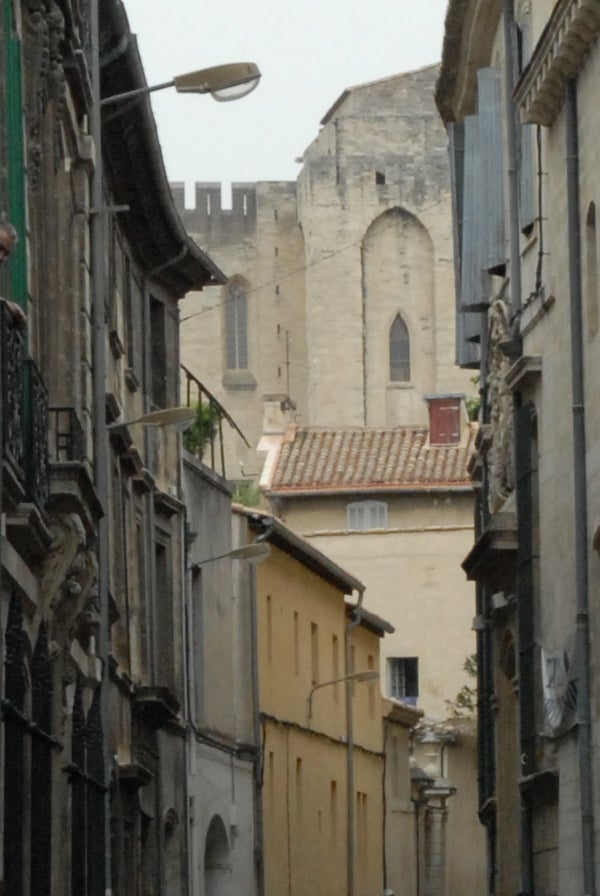 At 800 ISO the noise level suddenly takes a big jump, and is now visible in some of the lighter tone areas as well. It does bear a slight resemblance to film grain though, so some people may like it. 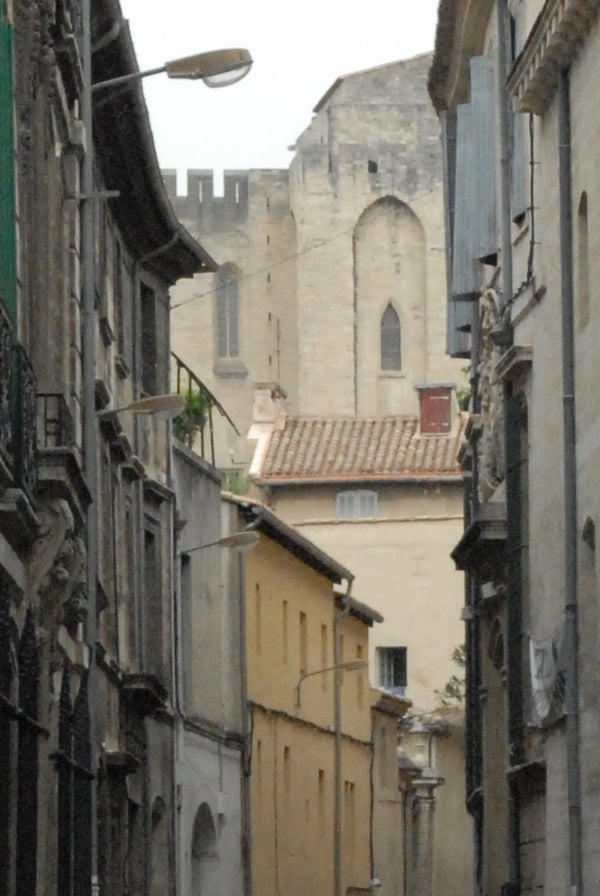 At 1600 ISO there is now a great deal of noise across the entire image, although it doesn’t seem to have affected overall colour rendition, and there is no random colour speckling. 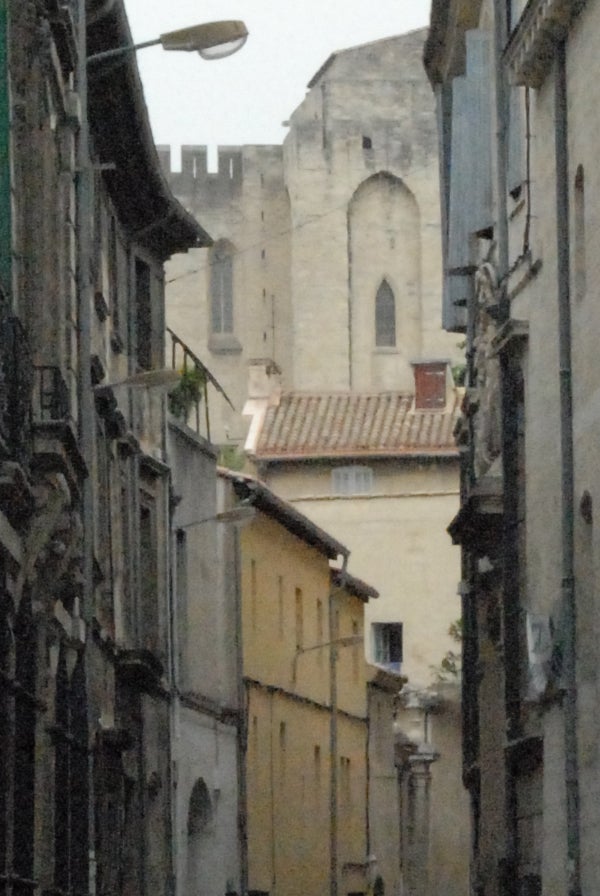 In this optional high-speed mode at 3200 ISO the image is very noisy and degraded, a lot of detail has been lost and colour rendition has also largely broken down. There are some banding artefacts visible too. 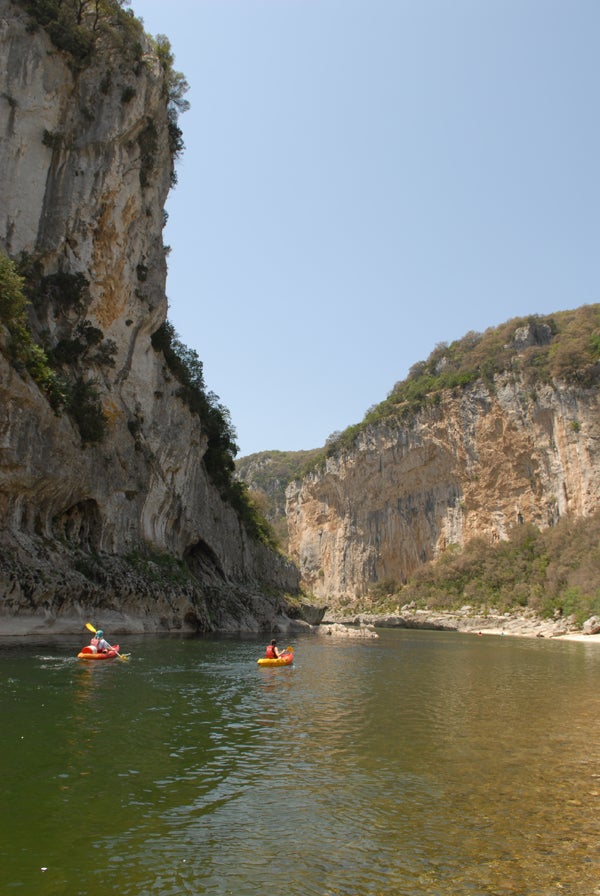 Here’s the reason my review was rather late this week. I took the D200 on a canoeing expedition down the spectacular Gorge d’Ardeche in southern France, the largest river canyon in Europe. 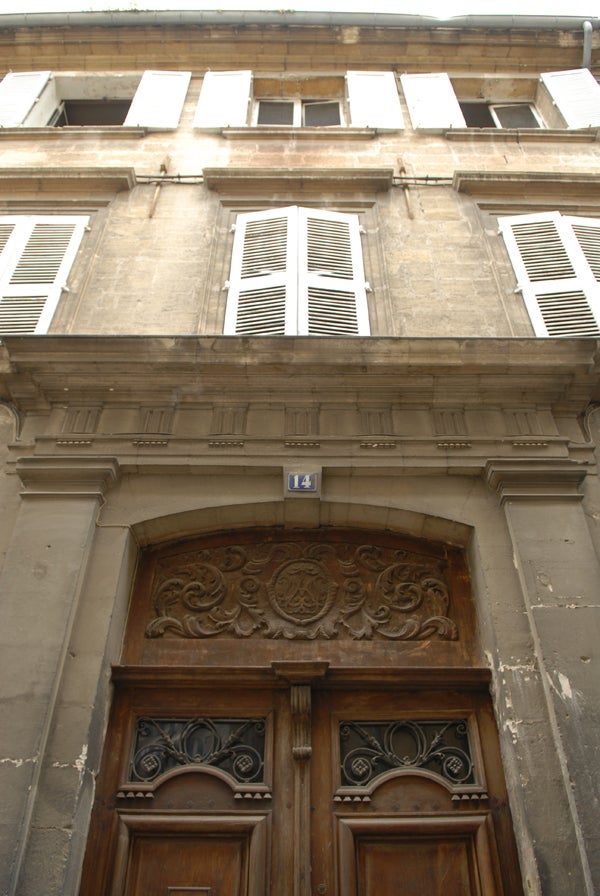 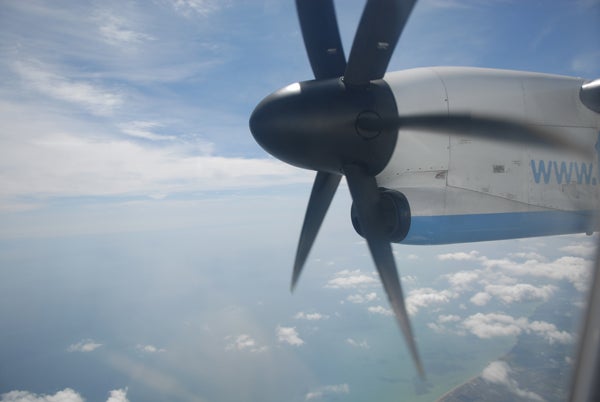 The D200 has a maximum shutter speed of 1/8000th of a second, but you’ll need either a very fast lens or a very bright light to use that sort of speed. With F2.8 and a speed of 1/2500th, you can freeze almost any action. 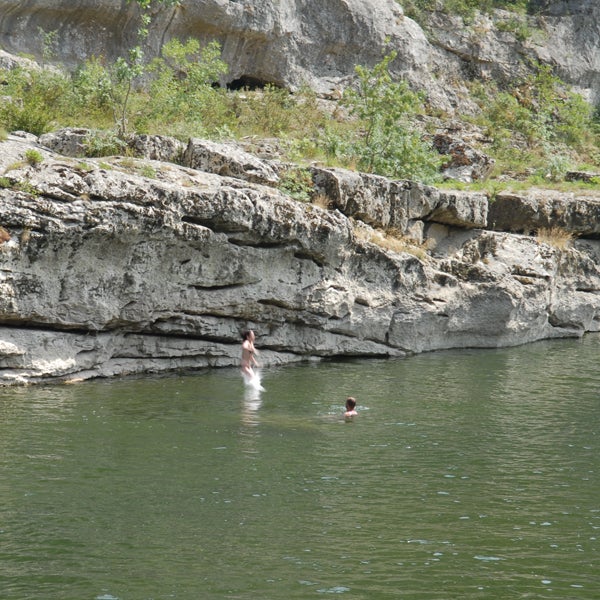 With almost instant focusing and negligible shutter lag it is possible to take perfectly timed shots with the D200. 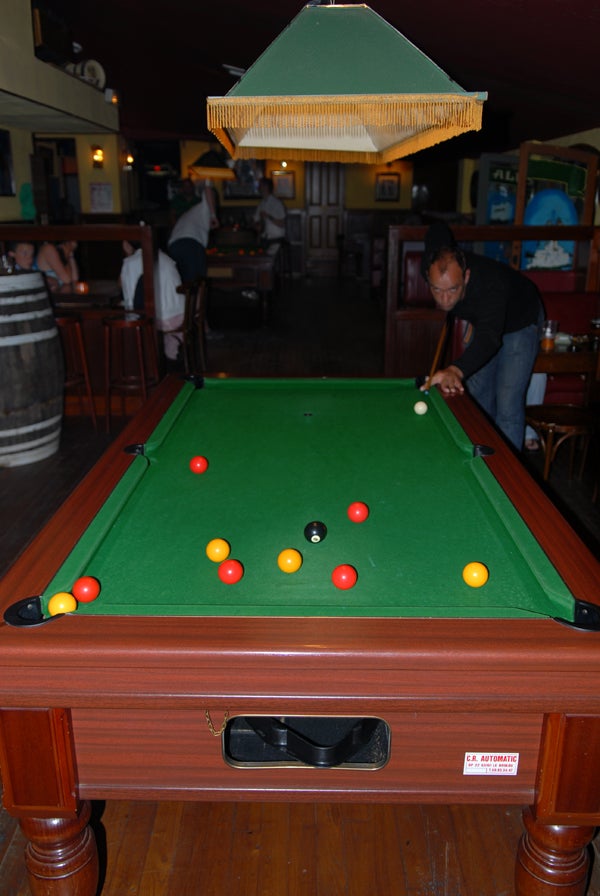 The built-in pop-up flash on the D200 is surprisingly powerful and produces a nice even illumination. As you can see it has a very good range. 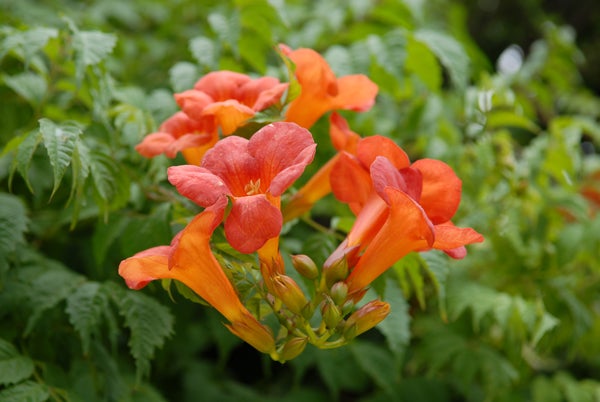 Colour rendition in normal optimisation mode is slightly muted and a little bit dark. It is somewhat brighter in RAW mode. 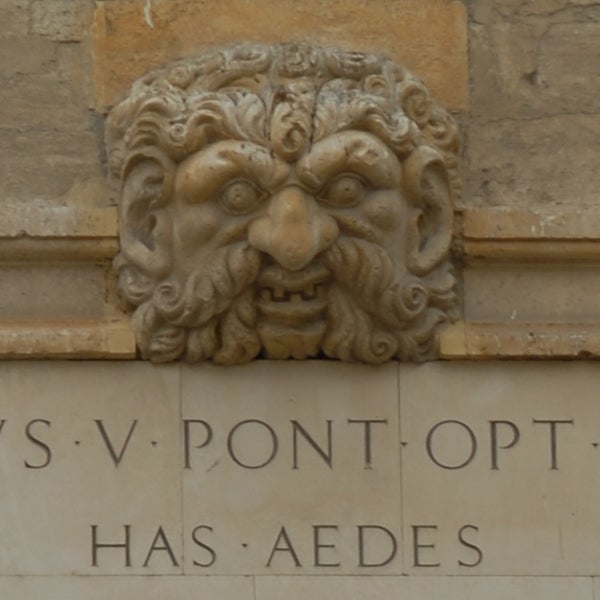 In JPEG Fine mode, there is a certain softness to the final images, as this 600×600 crop of a 100% resolution image shows. 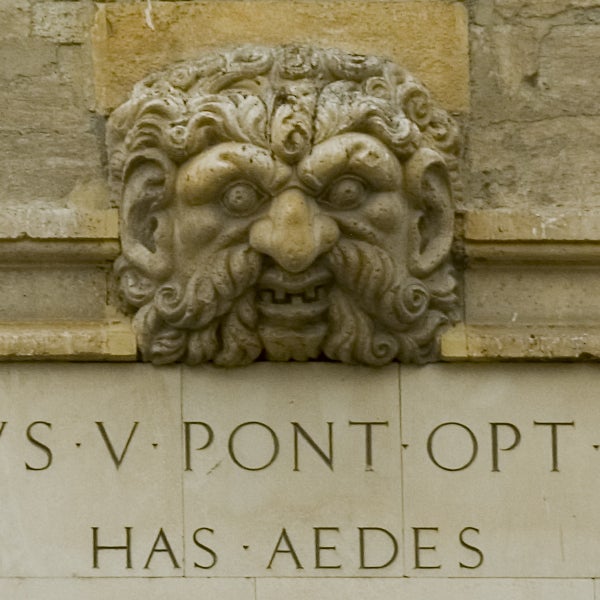 Converting a RAW file image in Photoshop with 50% sharpening produces far more detail and better contrast than the camera-processed JPEG. 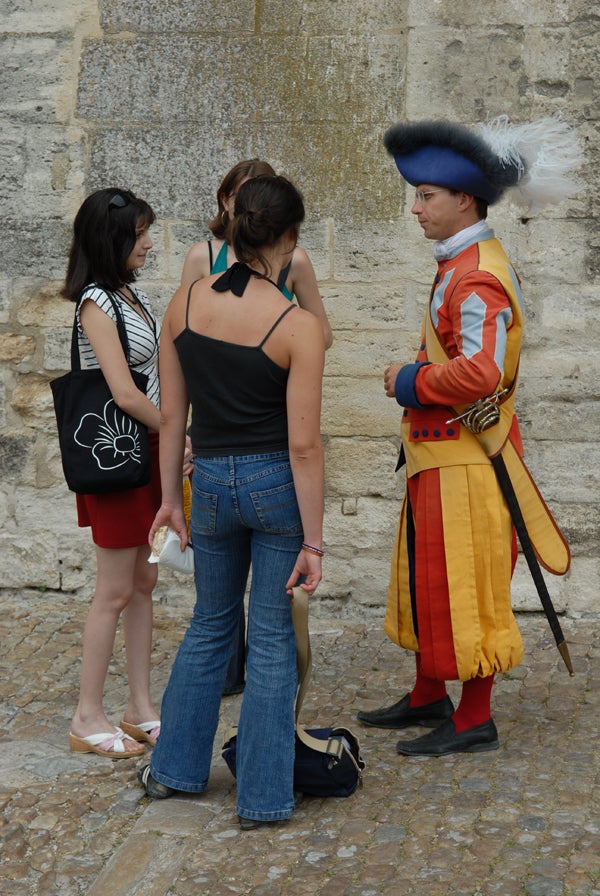 In the normal colour optimisation mode, colours are slightly muted, and lack punch and contrast. 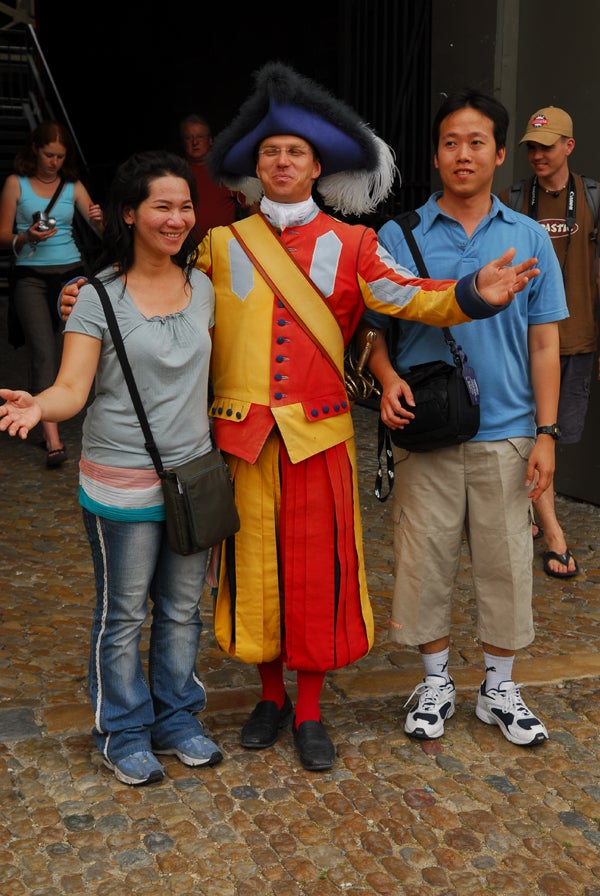 In vivid colour mode however the image is over-sharpened and the contrast and saturation are set way too high. The image looks over-processed and fake.