Up until a couple of years ago advanced compacts were seen as the natural choice for DSLR owners and photography enthusiasts looking for something a bit smaller than a full-sized DSLR and a bag of lenses. The arrival of compact system cameras with their bigger sensors and relatively small form factors might have been expected to change this, however this hasn’t actually been the case. 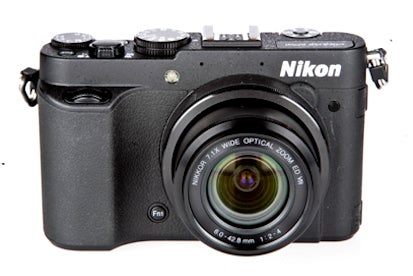 Indeed, far from cooling the interest in advanced compacts, the emergence of a thriving interchangeable-lens compact system camera market has only served to invigorate manufacturers into producing ever more performance orientated, pocket-friendly compacts. Indeed, in the past year alone we’ve seen some models – for example the Fuji X10 and, more recently, the Sony RX100 – take the advanced compact into new territory with larger sensors, faster lenses and added functionality.

The Nikon CoolPix P7700 marks Nikon’s latest entry into the advanced compact market and succeeds the P7100 model that we reviewed last year. There are quite a few differences between the two models, with the new model sporting a number of notable upgrades over its predecessor as well as a couple of omissions that may not necessarily be to everyone’s liking. 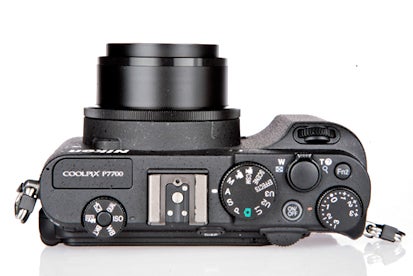 The first big change concerns the sensor; whereas the P7100 used a 10.1MP CCD sensor, the new P7700 is built around a 12.4MP backlit CMOS type. Video capture is another area that sees improvement with the 720p HD capabilities of the P7100 upgraded to 1080p Full HD on the P7700. Continuous shooting has been boosted too, with the P7700 making a significant leap from the somewhat paltry 1.3fps of the P7100 up to a much more respectable 8fps.

There are some similarities though. For example, the P7700 sticks with the same EXPEED C2 image processor found in the P7100. Sensitivity remains the same too, with a standard range of ISO 100-3200 along with an extended ‘Hi1’ setting of ISO 6400. As ever the exposure mode dial sports the full range of PASM controls for semi and full manual control over shutter speed and aperture, backed up by a fully Automatic mode for those point-and-shoot moments. The P7700 also gets 20 Scene modes, an Effects mode for giving your images a soft focus or cross-processed look, and last but not least three user-defined Custom slots. 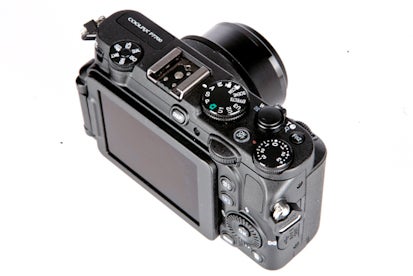 In addition to regular JPEG capture the P7700 also allows you to shoot Raw for enhanced digital darkroom flexibility – something that’s pretty much expected of any serious advanced compact these days. And as with the P7100 there’s also a built-in neutral density filter that gives you an extra three stops when activated – a pretty useful feature to have on board should you want to use slower shutter speeds in bright light in order to capture movement. EV Compensation of up to /- 3EV is also available via a dedicated dial on the top plate. 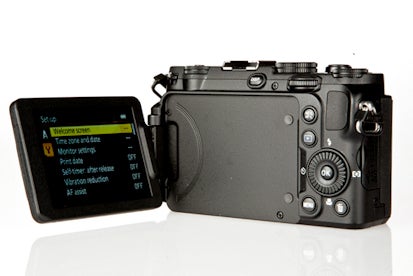 One thing that the P770 loses – rather than gains – over c its processor though is the optical viewfinder. There are certain to be mixed feelings about this move, with some decrying the extra functionality offered by having a viewfinder present while others will cite its tiny size and poor frame coverage as no great loss. Either way, making up for its loss is a newly designed vari-angle LCD monitor on the back. Whereas the core specifications of 3in/921k-dot remain the same, the fact that the new monitor is now side hinged – as opposed to the purely tiltable screen of the P7100 – adds much more flexibility, allowing the screen to be fully rotated for easy self-portraits as well as folded back into to body for safer storage when not in use.

Despite being relatively substantial – even by advanced compact standards – the P7700 is actually lighter than it looks. Build quality, nonetheless, is very good with a magnesium alloy shell complemented by a rubberised grip that enables you to hold the camera quite comfortably and securely. Whereas the P7100 offered a round command wheel that sat flush on the front of the camera the P7700’s command dial is set into the camera body on top of a small ledge at the top of the finger grip; those used to using Nikon DSLRs should feel immediately at home with it. The exposure and EV compensation dials on top of the camera, meanwhile, are both fashioned from metal, which adds to the overall feeling of quality. 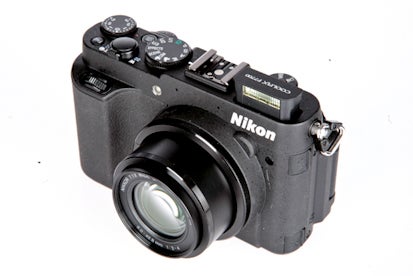 Given that the P7700 is aimed at enthusiast photographers it comes as no great surprise to find that there’s an abundance of physical controls littered about the camera’s body, especially on the back. For those that like to continually tweak and optimise shooting settings it’s much quicker than having to open up the in-camera menu. While the Mode dial and EV Compensation dials are both stiff enough to avoid accidental nudges, we did find that the rear command dial/directional pad is a bit loose. Given that your thumb naturally rests against it when holding the camera we found that this can be a bit annoying.

Given the removal of the optical viewfinder, we’re pleased to report that the 3in/921k-dot LCD screen offers excellent performance with clear, bright and smooth image reproduction. That said, it can be slightly more difficult to view in harsher light thanks to its articulation. Nikon menu systems have generally scored well in the past thanks to being well laid out and easy to navigate and the P7700 continues this trend.

Unfortunately in terms of performance, things aren’t quite so impressive though. Start-up time, while hardly instantaneous isn’t too bad. Write times, however, are frustratingly slow. Even with a relatively speedy memory card on board, the camera can take up to four seconds to process each Raw (or Raw JPEG) image, during which time the camera remains locked up. This was one of the major flaws with the P7100, so it’s disappointing to see that Nikon hasn’t sorted the issue out with the P7700. We can only speculate of course, but perhaps if the P7700’s EXPEED C2 image processor were to be upgraded to the more powerful EXPEED 3 chip, then the camera would have the required extra grunt to deliver snappy processing.

Of course, the P7700 is hardly alone in being a bit slow at processing images captured at the highest setting possible, but for the Raw-shooting target market this is likely to be disappointing nevertheless. Thankfully, the P7700’s contrast-detect AF system redeems things, and although it’s slower than we’ve seen on some recent compact system cameras it’s still perfectly quick enough when compared to its immediate advanced compact rivals. What is perhaps more of an issue is the Auto AF’s patchiness when asked to pick out the main subject in a scene; we found with some regularity that we had to swap from automatic AF mode into one of the user-defined ones and set the AF point ourselves, which kind of defeats the point of having an automatic AF mode in the first place.

In spite of its performance-related disappointments, overall image quality from the P7700 is very good. The metering system is consistently accurate, and when faced with the kinds of tricky situations that would cause many other cameras to underexposure the P7700 handled things with aplomb. If we were to be picky then there are occasional circumstances where the camera opts for slight overexposure, which in turn leaves images lacking a bit of contrast.

Colours tend to be natural rather than overly saturated, which suits certain situations better than others. If you’re shooting JPEGs then there is some scope to tweak the look and feel of your images via the on-board the Picture Control settings. 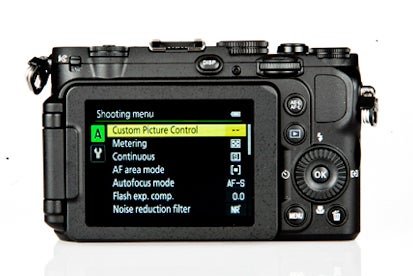 The 28-200mm fixed zoom also performs well although some minor barrel and pincushion distortion does make itself known at the respective wide and telephoto ends of the focal range. Thankfully this can be controlled quite well via the built-in Distortion Control feature that’s accessed via the main in-camera menu. Noise is visible to a lesser or greater degree at all sensitivity settings, however it’s far less intrusive than might be expected at the upper reaches of the ISO scale.

Auto White Balance is excellent in natural light, while under artificial light sources the P7700 impresses greatly with its ability to render images without any unwanted colour casts. In fact, if anything the camera can prove a little too eager to do so, sometimes removing some of the natural character of the light as well. 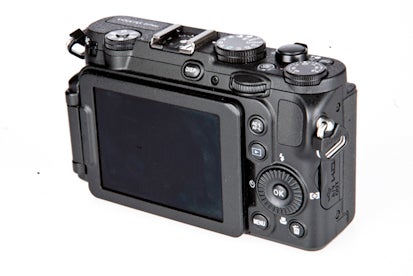 Verdict
The Nikon P7700 is a formidable advanced compact that is sure to appeal to plenty of enthusiasts looking for a camera that delivers full manual controls, a solid feature set and great image quality. While some may decry the loss of the optical viewfinder, the improved vari-angle rear LCD monitor does go at least some way to making up for it. Indeed, the only real disappointment is the slow write time when shooting Raw or full resolution JPEGs. If you can live with this then the P7700 offers a well-rounded package along with the biggest zoom in its class. 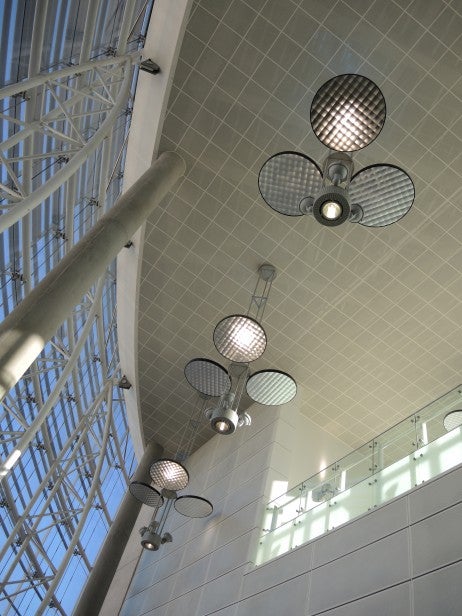 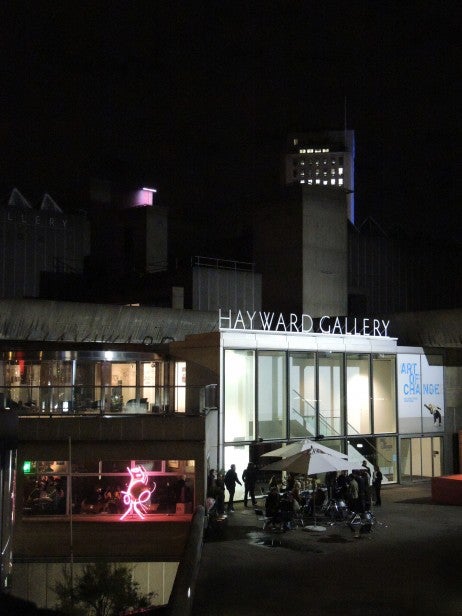 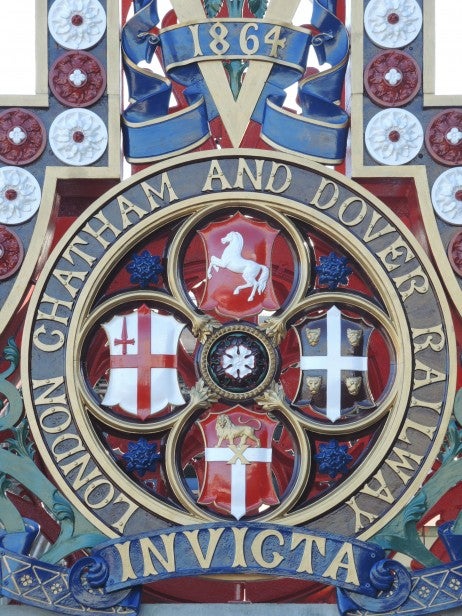 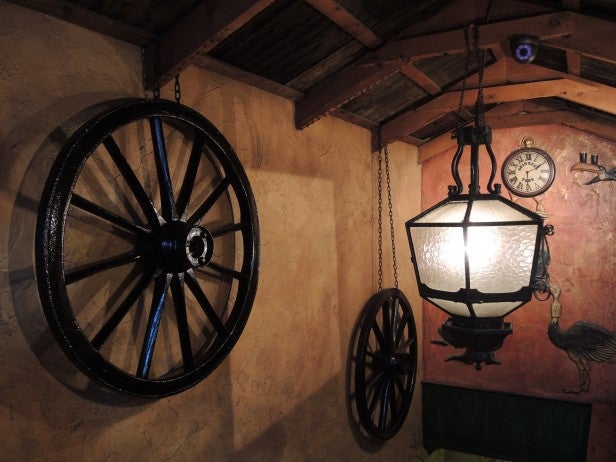 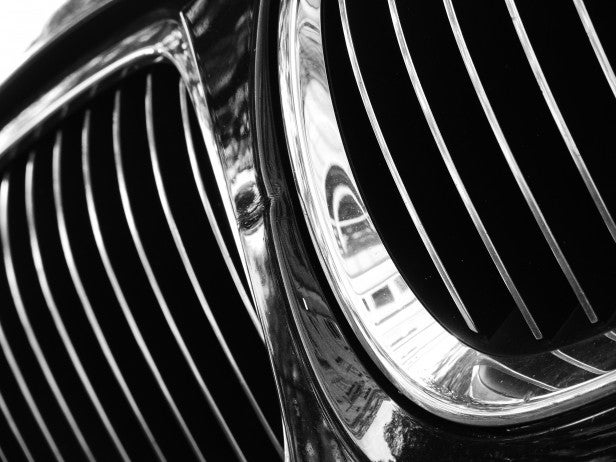