This is a camera I’ve been waiting to get my hands on for quite a while. Announced over a year ago, it’s still the Big Daddy of the Nikon CoolPix range. When I say big, what I actually mean is enormous. Nearly 15cm from front to back when powered up and weighing in at 680g including the battery, the 8800 is one seriously massive camera. It must be with a sense of humour that Nikon’s corporate website lists it under ‘Digital Compact Cameras’. 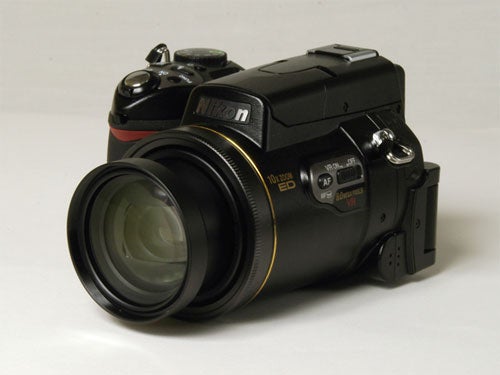 To be fair, it also comes under the heading of ‘Hobbyist & Enthusiast’, and that at least is right on the money. The CoolPix 8800 may be nearly the size of an SLR, but it has the specification to match. As well as a big 2/3in 8 megapixel sensor it features a massive 10x optical zoom Nikkor ED lens, equivalent to 35-350mm on a film camera. Nikon ED glass is renowned for its optical quality, and is found in Nikon SLR lenses used by professional photographers all over the world.


Coupled to this is a versatile exposure control system also comparable to that found in Nikon’s digital SLR cameras, a tough alloy body with SLR-like handling, a hot shoe for an external flashgun, as well as the ability to record TIFF and RAW files. It’s obvious that Nikon is aiming this camera squarely at those thinking of buying a digital SLR. Heck, even the V-shaped red flash on the handgrip is exactly the same as those on Nikon’s digital SLRs. This similarity is also reflected in the price. Even shopping around online it’s difficult to find an 8800 for much less than £500, while you can pick up a D50 SLR with an 18-55mm lens for under £450. Is Nikon actually undercutting its own market here? 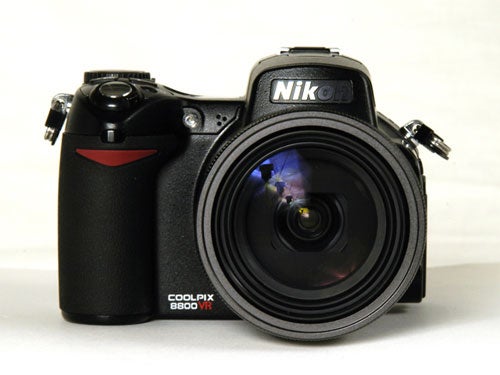 Of course a D50 with a 350mm lens would be a lot more expensive, and it’s here that the 8800 has its big advantage. Camera shake is a well known problem with large zoom lenses, so to combat this the 8800 is fitted with Nikon’s proprietary Vibration Reduction system, which uses motion sensors and moving lens elements to counteract shake when shooting handheld at low shutter speeds. Nikon claims 3 stops of extra low-speed shooting, and I found I was able to take sharp photos at near maximum zoom at 1/30th of a second, which is about right. This equals the performance of Konica Minolta’s moving CCD system, which in light of the recent news of Konica Minolta exiting the market, may next appear in a Sony digital SLR.

The list of features and options available on the 8800 is too long to explore in detail in a short review, so I’ll just concentrate on the highlights. Naturally, it features a full range of manual exposure options, as well as program, auto and 15 scene modes. The range of shutter speeds goes from 10 minutes on ‘B’ setting to 1/3000th of a second, which while not quite up to SLR standards is still one of the fastest on any digital compact. 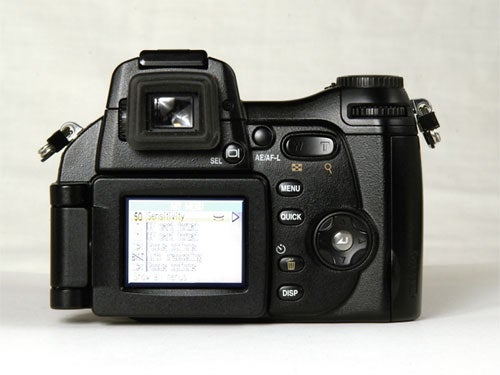 Like most SLR-style compacts the 8800 has an electronic viewfinder, but it is an exceptionally high resolution 235,000 pixel unit with a very fast refresh rate. It also has a flip-and-twist LCD monitor, which although only 1.8 inches in size is also very sharp, with 134,000 pixels.


The flash hot shoe has full TTL metering compatibility with Nikon’s excellent SB-600 and SB-800 Speedlite flashguns. However, you may not need one because the built-in pop-up flash has a range of 6 meters at wide angle and 3 meters at telephoto, more than enough power for most situations. However it has to be said that the flash does feel very flimsy when popped up, and seems to be mounted on rubber.


The AF system features a 9-point manual AF target grid, and the exposure meter can also be set to take a spot reading from the AF point, ideal for awkward compositions with unusual lighting conditions. Standard metering is a 256-point matrix. 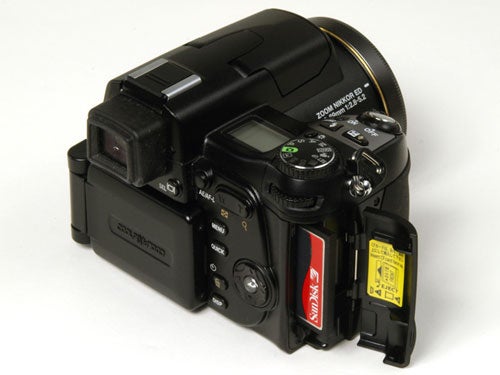 However the best feature doesn’t relate directly to picture taking at all. With a camera this complex, controlling it all could be a nightmare, but Nikon has given the 8800 an awesome fully customizable menu, which lets you copy your most often used settings to the front page, and then adjust them with the data input wheel. It’s easily the fastest and most versatile menu system I’ve seen on any camera. White balance, ISO and image quality can also be adjusted via the top dial.


In terms of overall performance however, things are not all so rosy. Thanks mainly to that gigantic lens, the start-up time is a leisurely 4.5 seconds. Once it’s had a stretch and put its shoes on however, actual shot-to-shot times are quite respectable, at least in JPEG mode. In continuous mode it can fire off a burst of 5 maximum quality shots in around 2.5 seconds, or 11 fine quality shots at 1.9 frames per second. An additional Ultra HS mode shoots 100 640×480 pixel shots at 30fps and saves then to a separate folder, presumably for use as animation frames.

In TIFF mode it takes around 16 seconds to record the huge 22MB files to the memory card, during which time the camera is locked, so this mode should only be used for maximum quality. RAW mode is slightly faster, taking around 9 seconds to record each shot.


The autofocus can also be a bit slow, especially at the long end of the zoom range or in low light situations. The camera is fitted with an AF illuminator, but it only has a range of about 2 meters.


I’ve also got to mention the zoom control, which is frankly bloody awful. It’s awkwardly positioned, jerky and difficult to control. A manual mechanical zoom control on the lens barrel would have made this camera 10 times better. 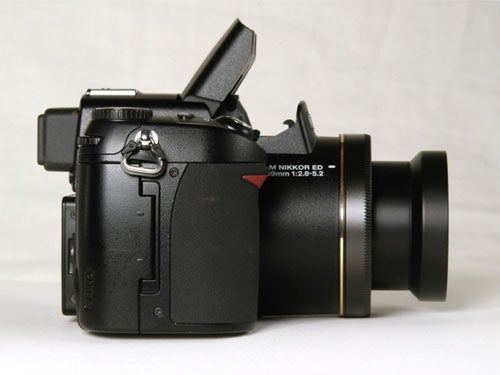 The 8800’s trump card is its almost flawless image quality. The lens makes up for its enormous bulk and weight by providing pin-sharp edge-to-edge clarity even at its widest setting, while the 8MP sensor captures every detail. Exposure metering is also virtually perfect, producing exceptionally accurate colour rendition even in low light sunset shots.


The only Achilles heel seems to be image noise at 200 and 400 ISO. At lower settings there is no noise problem at all, but I was surprised by how noisy the 400 ISO test shots were. To be fair I discovered later that the default setting for noise reduction is off, presumably to preserve fine detail at lower speed settings. Since I used the camera mainly at 50 ISO for maximum quality I would have turned it off anyway. 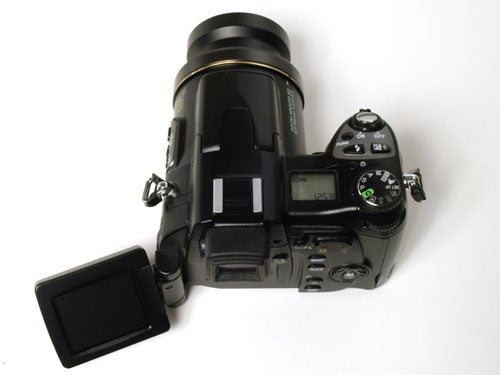 All in all, an outstanding performance from one of the best cameras on the market. There haven’t been many cameras in the past 12 months that I’ve really wanted to keep, but the CoolPix 8800 is certainly one of them.


The CoolPix 8800 is an awesome camera for any enthusiast with deep enough pockets. Thanks to the big sensor and superb Nikkor ED lens its image quality is among the best available, while the exceptionally versatile exposure and AF systems provide plenty of creative controls and ensure accurate results under a wide range of circumstances. It’s not without its problems, such as high-ISO noise and sluggish focusing, but it is one of the few a real alternatives to a digital SLR.


Note: These ISO test shots were taken with noise reduction set to ‘off’ – its default setting, in order to preserve image quality at low ISO settings. 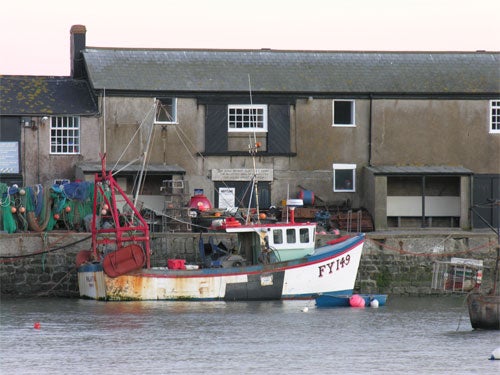 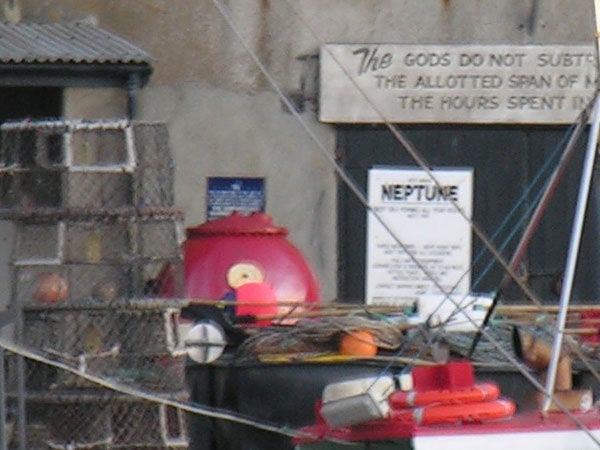 At the minimum sensitivity setting of 50 ISO there is no visible image noise. 1/5th sec at f4.7, with the camera on a tripod. I think I need a bigger tripod. 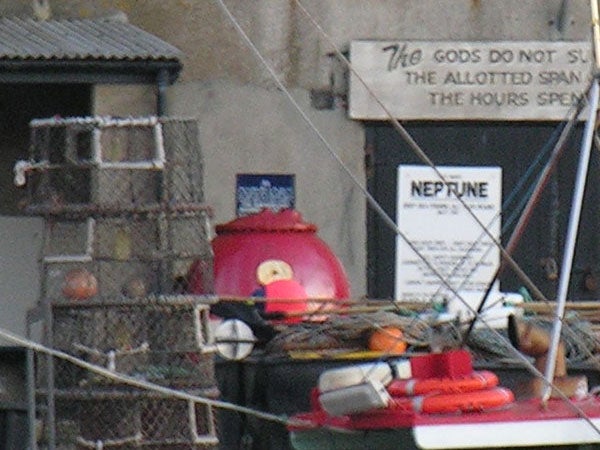 Already some image noise is visible in darker areas at 100 ISO, and a little fine detail has been lost. 1/10th sec at f4.7. 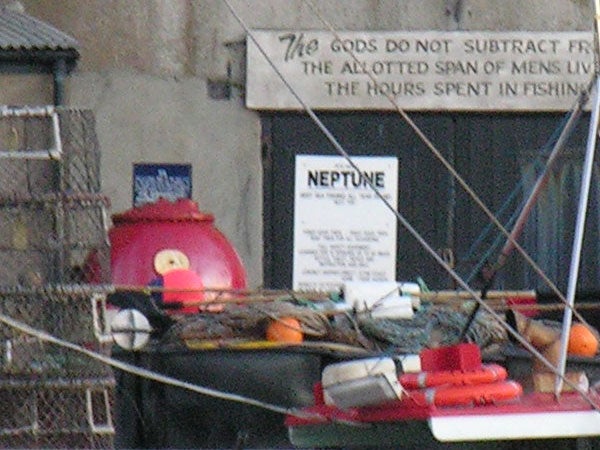 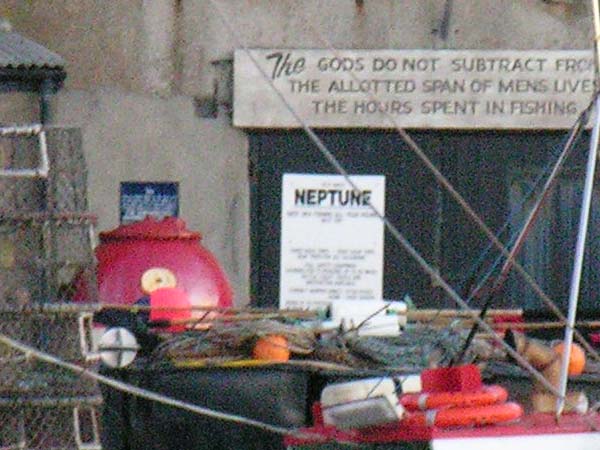 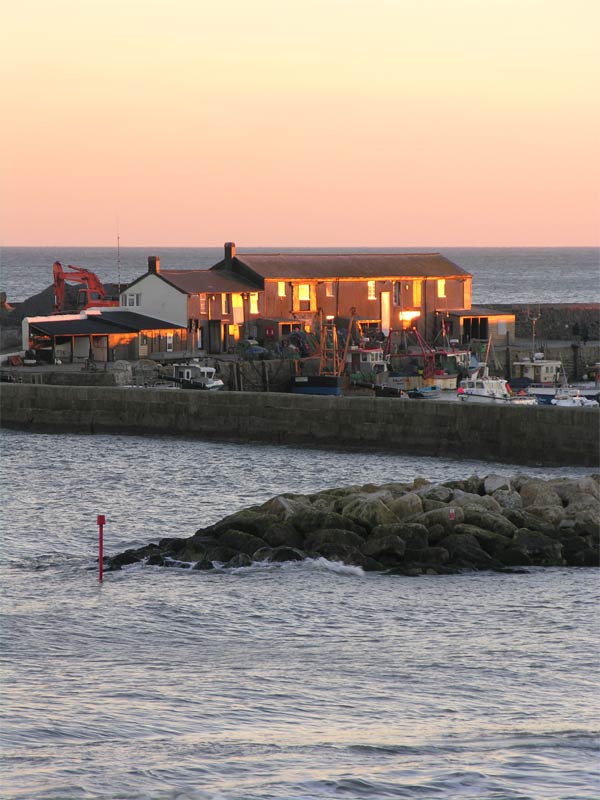 The outstanding colour rendition of the 8800 has captured every tone of this late evening shot. 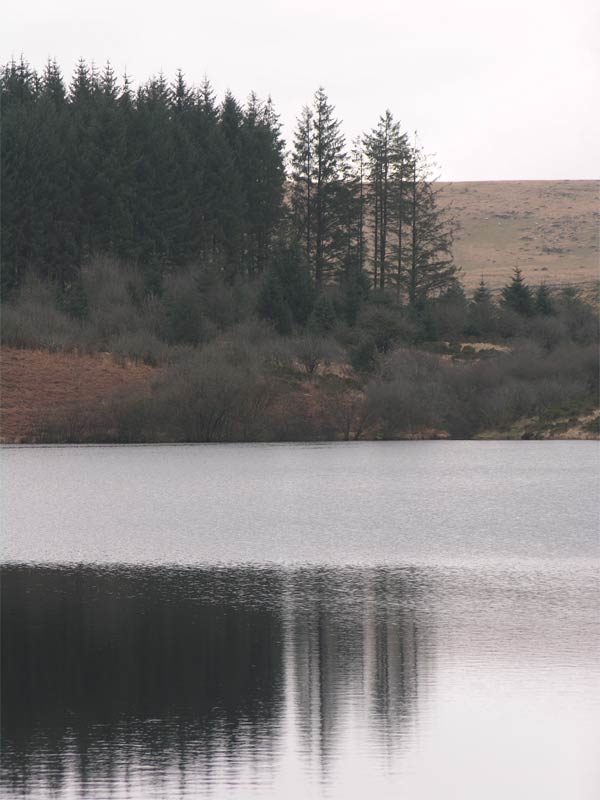 Even at the widest angle setting, the Nikkor ED lens is pin-sharp right into the corners of the frame. 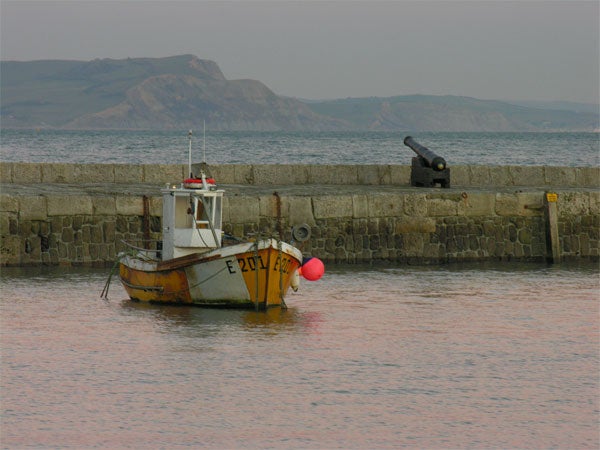 The VR system provides 3 extra stops of low-light shooting. This was taken hand-held at 1/30th of a second at a focal length equivalent to 280mm. 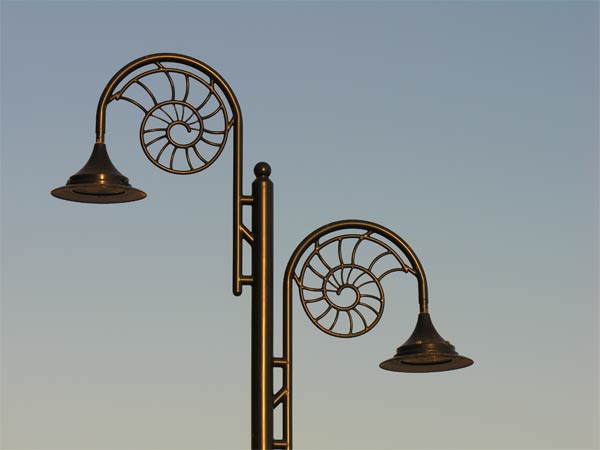 Even at the space-saving Normal quality setting there are no visible JPEG artifacts on the subtle gradient of the sky in this shot. 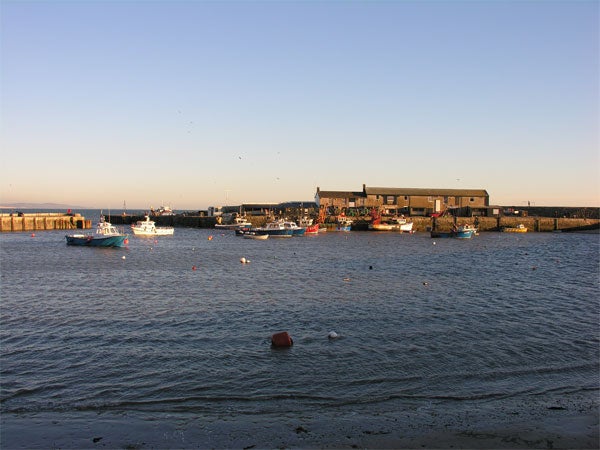 The 8800 has a wide angle setting equivalent to 35mm on a film camera. Not brilliant, but good enough for some nice panoramas. 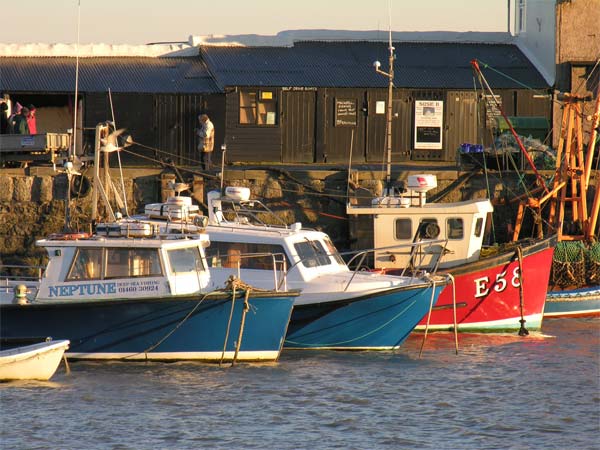 Taken from the same position as the previous shot, this demonstrates the magnification of the big 10x optical zoom lens. 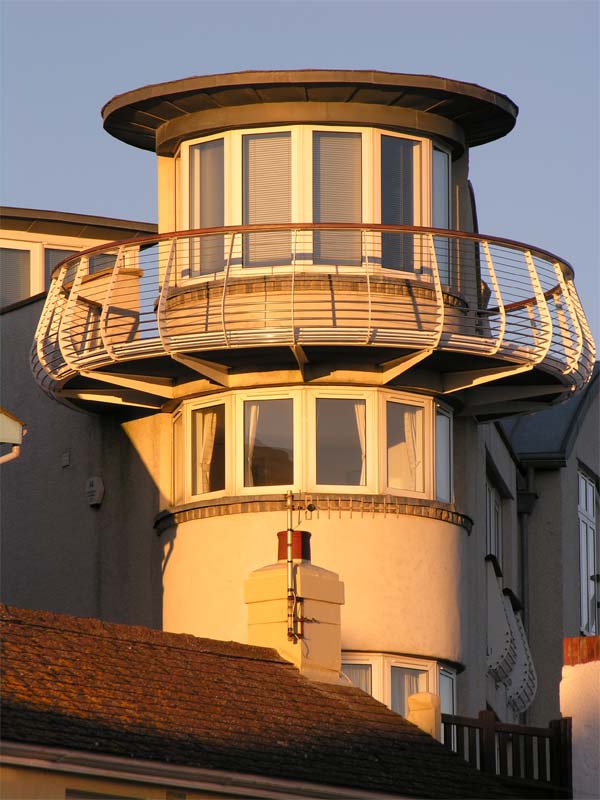 Again the accurate colour reproduction captures the sunset colours in this shot. I want to live in this house.