Nexon Technology is a newcomer to the UK storage market and claims that the NexonNAS 1000 as the world’s smallest RAID 5 NAS (network attached storage) appliance. Strong words which Buffalo Technology might take issue with as its well-received TeraStation is of very similar dimensions and also offers RAID 5 protection. Nexon also delivers the magical 1TB of hard disk storage, but with a price tag just on the wrong side of four figures the NexonNAS 1000 doesn’t initially look as good value. 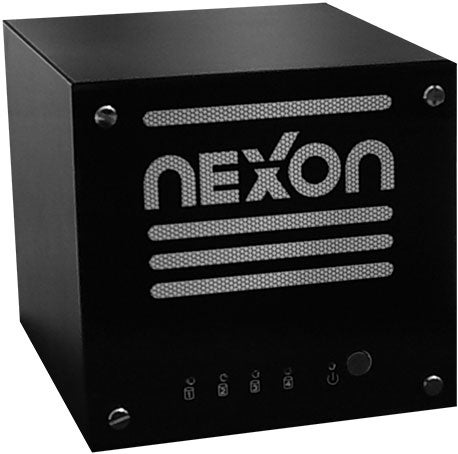 However, this compact cube does offer a large number of features not found in the TeraStation which could make it a better alternative for small businesses looking for more control over their network storage. At the core of the NexonNAS 1000 is a network storage processor developed by Infrant Technologies. This 32-bit RISC processor is quite unique as it delivers support for up to four Serial ATA (SATA) channels, Gigabit Ethernet and, more importantly, hardware managed RAID 0, 1, or 5 arrays. A modest 128MB of PC2700 SDRAM is supplied in the single DIMM socket but the Linux-based OS is implemented separately on a 64MB CompactFlash card so all hard disk storage will be up for grabs.


The NexonNAS 1000 doesn’t look as pretty as the TeraStation but internally it’s a lot tidier as the hard disk cage is a separate component. It isn’t surrounded by chassis support paraphernalia making the Western Digital WD2500 drives much easier to get at. All you need do is remove the lid and four thumbscrews to release the front panel, undo a couple of screws on the drive carrier, pull out the SATA power and interface cables and slide the drive out from the front.

With the bundled RAIDar software on the case, installation will be swift as it searches the network for appliances and displays them ready for configuration. It’s an informative little tool as along with the appliance’s IP address it shows status indicators for each disk and volume plus temperature, fan and power supply. From here you can go directly to web browser access which defaults to secure encrypted access over HTTPS. A setup wizard is provided to walk you through initial configuration. Access security is very good as the appliance supports three different modes. The Share setting provides minimal security by restricting access to shares with an optional password that applies to all users while User mode implements user or group membership authentication. Domain mode is the strongest option as the appliance can join a domain controller or Active Directory services to authenticate users.


The NexonNas 1000 scores even higher for its security features as each of these modes also support different disk quotas allowing a range of storage controls to be implemented. In Share mode you can set different quotas for each share which affect all users while User and Domain modes allow quotas to be applied to individual users or groups. The appliance supports the CIFS/SMB, NFS and AFP protocols so Windows, Unix, Linux and Macintosh clients can access network shares and it’ll also function as an FTP server. A couple of USB 2.0 ports are also available but these are only provided for attaching printers for sharing over the network or USB wireless access points.


The system is supplied with all four disks arranged in a RAID 5 array but you can break this up and create new ones. The process of deleting a volume is well protected so it’s very difficult to do this accidentally. You can select from RAID 0, 1 and RAID 5 arrays, designate one drive as a hot-standby and decide how large the volume should be. The rebuild begins after a restart and the appliance will email you to let you know when it’s been completed.


Backup options are extensive but whereas the TeraStation offers up to eight full or differential tasks for securing selected shares to a local drive the NexonNAS 1000 uses snapshots which take an image of selected volumes at scheduled intervals. As a first line of defense these are a great idea as they don’t take long to run and subsequent snapshots only secure changed or new data making them even faster. However, they use a reserved area on each volume which must be specified during volume creation and if it runs out of space the snapshot becomes unusable.


The bundled Genie Backup Manager Pro takes care of workstation backup to the appliance but this is the Lite version so only local and network destinations are supported. Removable media, remote FTP locations and tape drives can only be used if you upgrade to the full version. Nevertheless, it’s still more sophisticated than Buffalo’s Easy Backup utility and provides plenty of tools for users to secure selected data to shares on the appliance at regular intervals.


Nexon has informed TrustedReviews that it will be dropping the price of the NexonNAS 1000 to £998.75, just dipping under that magic £1,000 price barrier. With the new price, the NexonNAS 1000 looks even more attractive for any business that’s after a high capacity, fully featured, network attached storage solution.