New Star Soccer turns the football management game formula on its head. Rather than the player controlling a team, you play a 16 year-old whippersnapper with dreams of becoming the next Messi or Ronaldo and winning the World Cup for your country. This makes the genre much easier to shrink down to casual game size.

The road to superstardom isn’t easy. You start out at a semi-pro club, with few of the skills you need to impress your manager, team mates and fans. Skills are mainly improved through a number of “training” mini-games split into Pace, Power, Technique, Vision and Free Kicks. Improve your Pace and you’ll be able to cut out more passes, while increasing Vision gives you more, and better, opportunities to get that killer ball to your team. 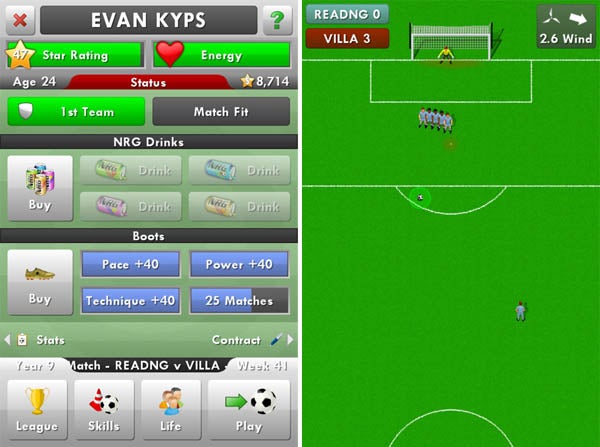 Gameplay is a streamlined process of carefully setting up power and direction by swiping back on the ball and then choosing where to strike the ball to add extra power, height or curl. New Star Soccer adds wind into the mix to provide an extra level of difficulty. It’s immensely satisfying to use the wind’s aid to pull off an amazing curled free kick into the top corner. The better you’re doing in the management side of the game, the more goes at this mini-game you’ll get per match.

Matches take the form of key incident reports, similar to the Football Manager games. Some incidents play out without any of your influence, others give you a chance to make or intercept a pass, take a shot, free kick or penalty. You can still influence a match without the ball by increasing, or decreasing, your level of effort throughout the match. As you might expect if you expend too much effort throughout the match you might run out of puff and be substituted, too little and you might not get the chances needed to impact a game. 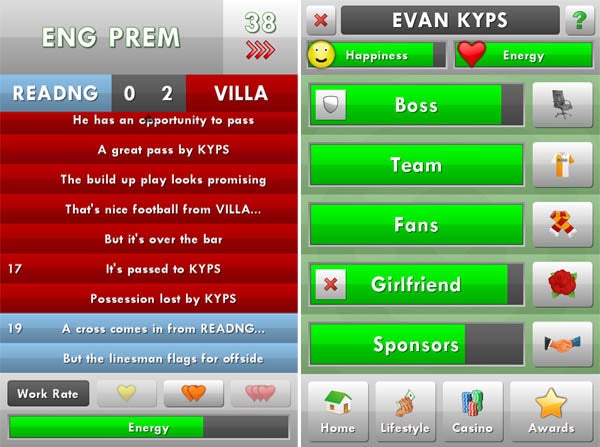 Your manager, team-mates and fans rate you at the end of a match, improving or decreasing your star rating depending on how you’ve performed. Team-mates will appreciate passes and assists, but might not be too happy with you if you’re a shoot-on-sight type player. Fans, on the other hand, mainly care about the result – win and you’ll be a golden boy, lose and boos will ring in your ears. Your manager only cares about your performance regardless of whether you win, lose or draw.

Even with just the football mini-games New Star Soccer is a fun and worthwhile game for 69p. What really sinks its teeth into you, though, are the RPG elements. Save up money to buy more bling and paparazzi will take snaps, improving your star rating and attractiveness to bigger clubs, sponsors… and the ladies. Spend it on vehicles instead and you’ll improve relations with team-mates and girlfriends who want to take your scooter (or private jet, once you’ve made it big) for a spin. Buying property improves the quality of the rest and relaxation you get between matches, ensuring you’ve got plenty of stamina for the next big game. 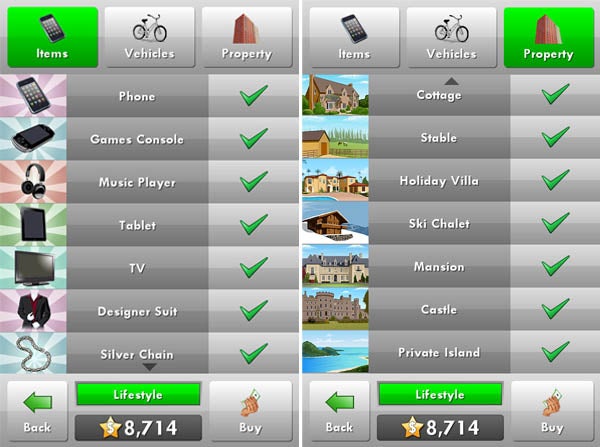 Get bored of playing football and you can spend some time in the casino – beware though, if you lose too much money your manager won’t be happy and you might become the target of unscrupulous characters looking for you to take a bung and throw a match. 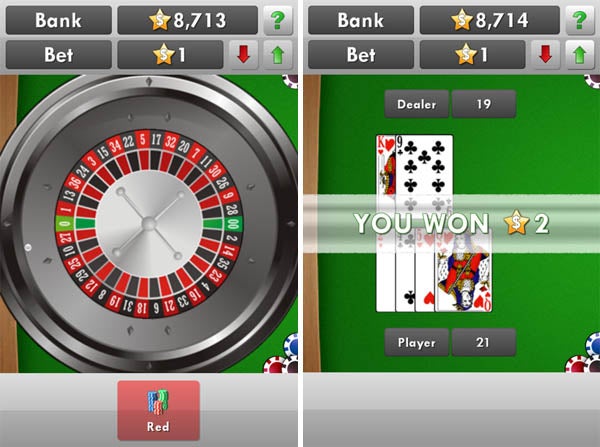 In its essence New Star Soccer is a very simple game with basic graphics and gameplay. Despite its name there’s nothing much here that’s radically new. However, much like a good football team, it’s much better than the sum of its parts. You’ll find yourself striving to improve your skills and saving fastidiously to buy that next item which will get you closer to an improved contract or playing for your country. Just don’t forget to take a break for meals and sleep.