There’s no doubt that Ethernet-over-powerline adaptors are a brilliant invention. As convenient as Wi-Fi is, there are times when it simply can’t provide the constant bandwidth wanted for streaming high resolution video, or transferring large files without going mad with frustration thanks to the process taking so long. Even 802.11n doesn’t solve the problems of Wi-Fi entirely. For one, a lot of devices, such as many TVs and both the PS3 and Xbox 360, don’t yet support the standard and for some purposes, primarily online gaming, the latency of a wireless connection is most undesirable. 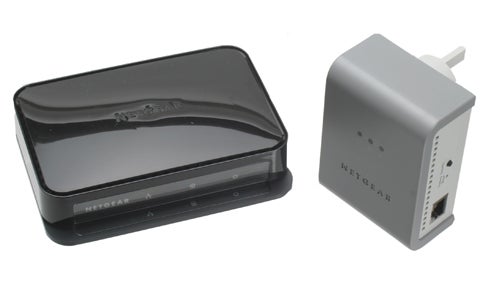 Traditionally powerline Ethernet adaptors also offered similar cable-reduction benefits to wireless, too, eliminating the need to trail Ethernet cables around your house to get a decent, stable, high bandwidth connection. With an every growing number of devices needing an Internet connection, however, the cable clutter is returning. It’s not hard to imagine having a TV, a Freesat box a PlayStation 3 and/or an Xbox 360 and a Blu-ray player in your living room all wanting access to your router.


It is, of course, entirely possible to use an Ethernet switch to connect all of those systems to a single powerline adaptor, but that’s a rather inelegant solution, not to mention one that sacrifices a power socket which is hardly convenient when a lot of adaptors still inexplicably take up two slots by themselves. The alternative solution is to combine that Ethernet hub with a powerline adaptor, which is exactly what the Netgear Home Theater Internet Connection Kit does.

The kit combines a four-port Ethernet switch with an XB101 adaptor, as found in the HDXB101 package. The packaging claims a maximum transfer speed of 200Mbps, which is a little misleading. That figure is a theoretical maximum (with the Ethernet connection running in Full Duplex mode which is fair enough), but unless you’re using two adjacent sockets or have implausibly high quality copper wiring in your property you’ll never see anything like that transfer speed.


Given its pricing, this kit competes quite closely with the Solwise Piggy6 HomePlug adaptor. Bearing in mind you have to add an adaptor costing about £40 to the Piggy6 to get the same functionality as the NetGear system, both cost just shy of £110 all in. While the Piggy6 has the convenience of combining its HomePlug functionality with a surge-protected power strip, the Netgear kit offers an extra Ethernet port. Which is more useful is debateable, but for me the extra port is the clear winner as I happen to have four devices needing a ‘net connection in my AV set-up.

The switch part of the adaptor pair is no larger than a normal four way switch, which is good. The four ports at the back are labelled with different colours, as the device supports Quality of Service, with bright green showing the highest priority port, dark green the next highest and the two orange ports the lowest priority. The idea is that you can ensure traffic on one device in your AV setup is given priority, but I’m not sure how useful that really is. I rarely download demos on my Xbox 360 while also playing Uncharted 2 multiplayer on my PS3, but maybe that’s just me. The built-in encryption may prove more useful if you’re particularly worried about others using their own adaptors to sneak access your network. 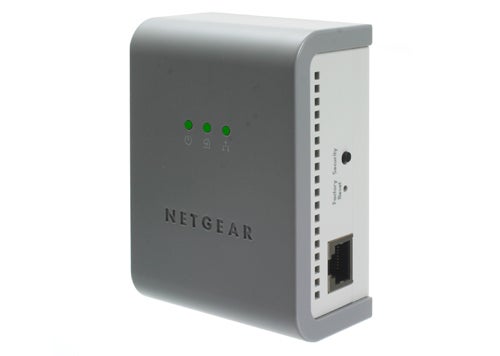 Also useful is the presence on both adaptor units of a connection strength LED. This lights up in red if the connection between the two is less than 50Mbps, orange if it sits between 50Mbps and 80Mbps and green if it’s greater than 80Mbps. That doesn’t definitely mean you’ll get transfer speeds in that region, but it’s a good quick indicator of whether you should choose a different socket to plug into.


In my home I was able to get a maximum transfer speed of 64.8Mbps, despite a green LED, which doesn’t sound great. That is, however, much better than the 25.6Mbps I was getting previously, with a set claiming an 85Mbps maximum transfer speed. To the maths-averse, I should point out that’s a better improvement than you would expect just from the increase in the max (theoretically) possible transfer speed. It’s also enough bandwidth to stream a Blu-ray movie, including its Dolby TrueHD or DTS-HD Master Audio soundtrack, were you so inclined and were it even possible.

More importantly latency between my living room and router dropped from some 50ms on 802.11g Wi-Fi to a mere 1ms with the powerline Ethernet kit. Gamers among you will appreciate that this could prove the difference between virtual life and death in a heated deathmatch. Don’t worry, you can still pretend to be using wireless if you die – nobody can tell otherwise.


As ever, this HomePlug kit proved incompatible with my old set, which is admittedly a couple of years old, but should work with any HomePlug AV adaptor such as a Solwise HomePlug AV Mains Pass Through or the aforementioned HDBX101. Considering four devices can be used with this kit, that’s not likely to be necessary though.


With transfer speeds as close to the theoretical maximum as can actually be achieved in real circumstances and the convenience of a four-port Ethernet switch at its business end, the Netgear Home Theater Internet Connection Kit is one of the best HomePlug systems we’ve looked at.