Netgear’s ReadyNAS appliances have always been well respected as they have consistently offered a good range of network storage features at affordable prices. The latest ReadyNAS NVX on review fills the gap between the six-drive Pro Business Edition and the older NV+ appliances and is aimed primarily at small businesses of up to 100 users. Key features are an improved hardware spec, a greater range of backup features including Netgear’s optional online Vault service and standard support for IP SANs.

The black chassis is the same as that used by the NV+ but we have no problem with this as it’s extremely sturdy and very compact. The NVX is only available pre-populated with hard disks but Netgear offers enterprise models with the review system kitted out with a quartet of 1TB Samsung Spinpoint drives. We were pleased to see the push button release mechanism on the old style drive carriers replaced with a new design as these have an annoying habit of jamming if not used for long periods.


Processing power gets a boost as the NVX sports Intel’s new 1.2GHz SoC (system on chip) and this is partnered by a decent 1GB of DDR2 memory on an SO-DIMM. Dual Gigabit ports are also included and these support load balanced or redundant link teams.

Installation is handled neatly by the bundled RAIDar utility and then you can move to the tidy web interface, which offers a quick start wizard that takes you through setting up shares and workgroup or Windows domain authentication. Client support is good as Windows, Unix, Linux and Mac systems can use the appliance and it offers FTP services on selected shares.


The improved hardware spec made its presence felt in our real world tests and to test the NVX we called up a Boston Supermicro rack server equipped with dual 2.5GHz L5420 Xeons plus 8GB of fully buffered memory and running Windows Server 2003 R2 x64. Copying a large video clip over Gigabit Ethernet gave us average read and write speeds of 52MB/sec and 43MB/sec – more than double that achieved when we tested the NV+.


FTP speeds were even better with the FileZilla client, returning read and write speeds of no less than 98MB/sec and 62MB/sec. We had no problems creating iSCSI targets as you access this option from the Volumes menu, enter a size in gigabytes for the target and apply CHAP authentication if required. Using the Iometer utility, we saw a single target return a raw sequential read rate of 105MB/sec – close to the maximum for a Gigabit connection.

If you want the best backup features then look no further as the NVX is stuffed with them. First up are snapshots, which take point-in-time copies of volumes and can be scheduled to run regularly. The NVX can manage multiple backup jobs itself where it can secure data stored locally or remotely on another share and copy it to a local or remote location and this includes other ReadyNAS appliances.


You get three USB ports for use with external storage devices and printers and the front port has a backup button alongside it. If you’ve defined backup jobs on the appliance and assigned them to the button then pressing it will run these in sequence. If not, then it will copy the contents of a predefined folder on the appliance to the attached device.

The NTI Shadow software provided with the NV+ gets replaced by a three-user copy of Memeo’s Backup Premium but this is for workstations only and will not install on Windows server systems. It functions in the same manner as NTI Shadow as it uses a background task to monitor selected drives and folders and once a full backup has occurred, it secures files as they are modified or newly created.


With the NVX, Netgear introduces the Vault – an online backup service handled by ElephantDrive. Once you’ve enabled the service on the appliance you can create an account from the Vault web portal and set up backup jobs to copy data from selected shares to the Vault data centre.

It’s very simple to use and we created a job to constantly monitor the Backup share on the appliance. Once a full backup had finished we dropped some more files into this folder and after a few seconds they were automatically copied to the Vault. Alternatively, you can create backup jobs for different shares and run them at daily, weekly or monthly intervals.


Usefully, the off-site data can be accessed from any location over the Internet so if your NVX goes belly-up or is nicked you can still get your data back. A search facility is provided in the portal and once you’ve made your restore selections you can copy them back to a destination of your choice.


Having used an NV+ in the office for a couple of years now, we can say the NVX introduces some welcome new features. Performance sees a big boost and small businesses will appreciate the wealth of backup features and particularly the reasonably priced off-site Vault option. 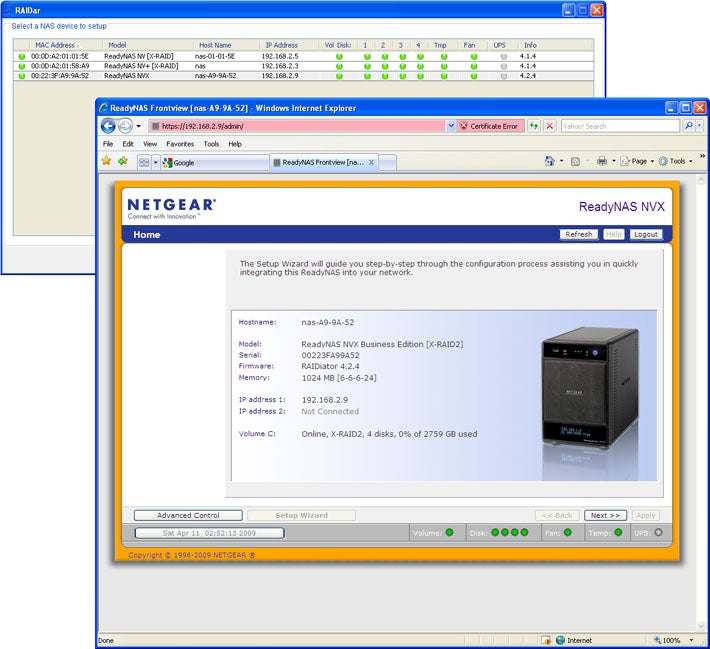 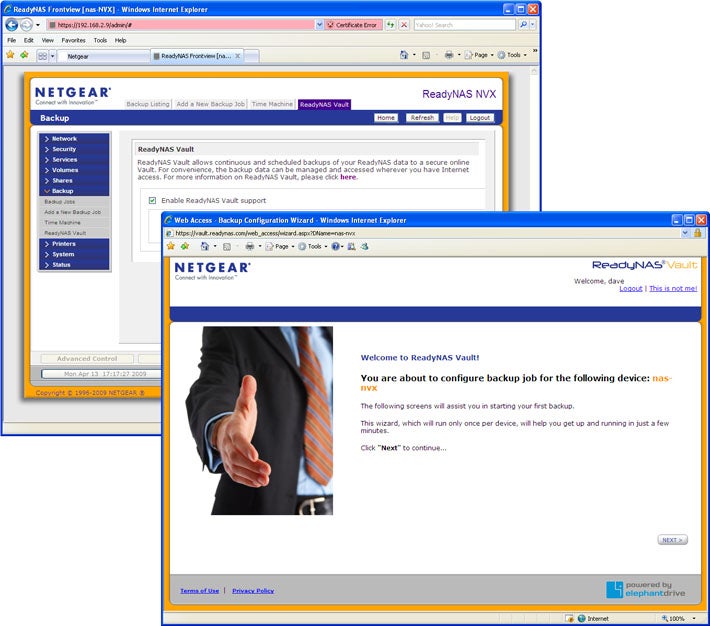 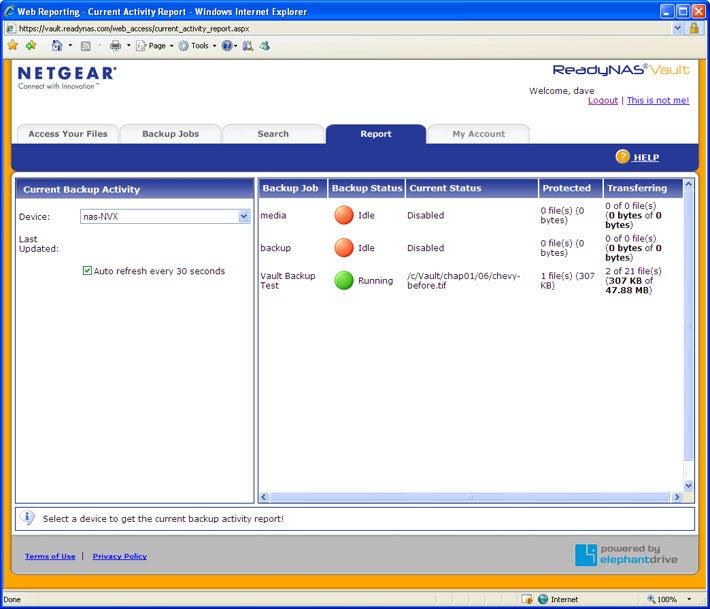 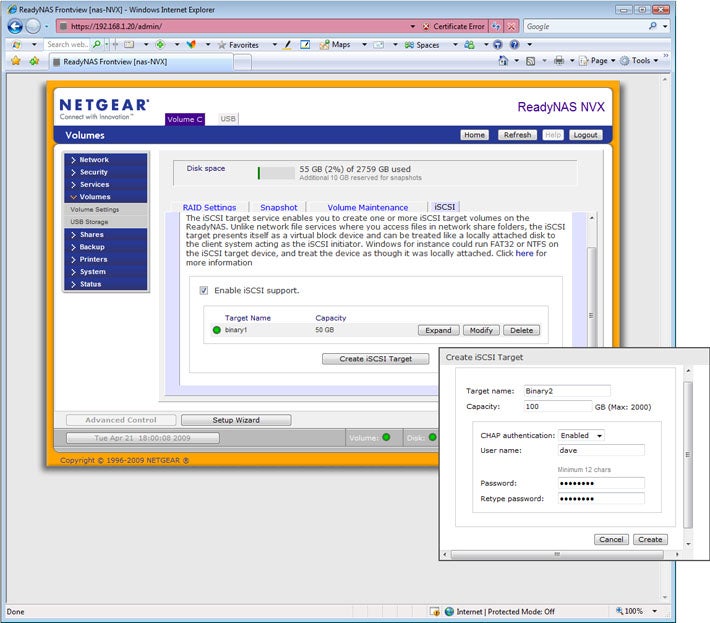 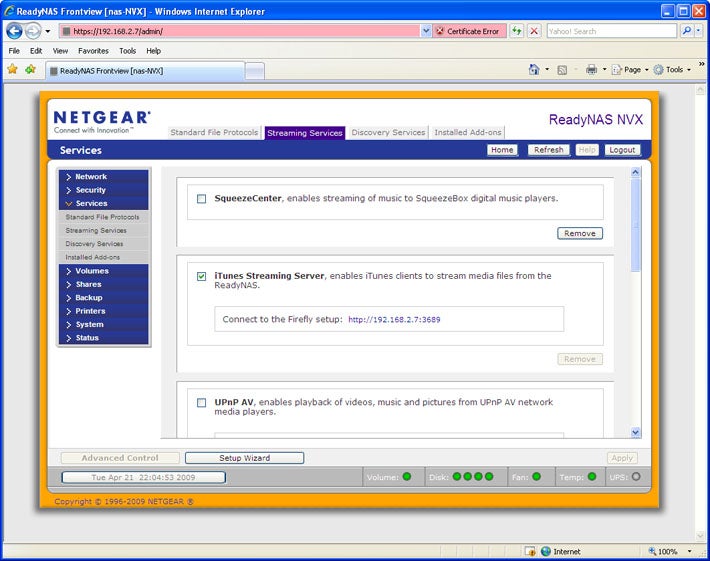