Netgear may be an indomitable force in the home and small business networking market but one of its weakest links has always been storage. Whilst many of its competitors were busy delivering NAS appliances by the bucket load, Netgear made the not altogether wise decision of cosying up with Zetera Corporation and launching the SC101 and Storage Central Turbo appliances – an odd couple that never really caught on and have since been demoted to home entertainment storage solutions. Clearly, it needed something to offer small businesses and in May this year it made the laudable decision to acquire Infrant Technologies and its ReadyNAS products. 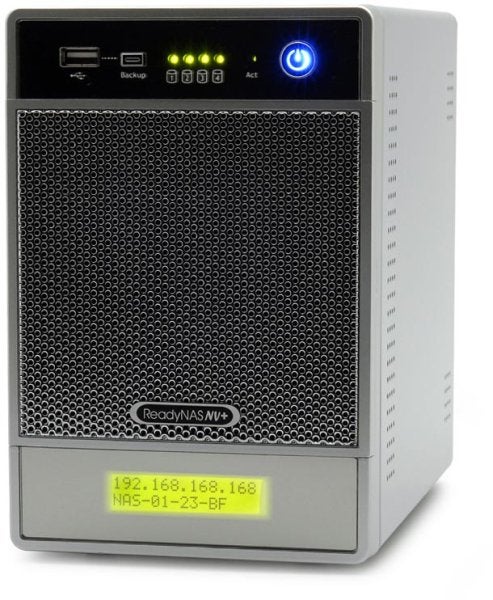 We’ve already given you the low-down on the ReadyNAS 1100 rack mount system and now we take a closer look at the latest ReadyNAS NV+. One feature that has always impressed us is that while the NV+ may be built like a tank it also looks good on the desktop. Furthermore, even though it has room for a quad of hot-swap SATA hard disks it is still one of the smallest appliances of its type. Cooling is handled by a large fan at the rear but the appliance is very quiet, making it suitable for both office and home use. The only external difference with the NV+ over its predecessor is the backlit LCD panel below the drives.


Usefully, this reveals the status of the unit during bootup and then settles back to show the IP address along with used and available disk space. It switches itself off after a few minutes and disappears behind the mirrored panel but can be brought back to life by jabbing the power button.


Although taken for granted a NAS appliance’s power supply is now much higher on the agenda as older boxes may not be able to handle the demands of the latest 750GB and 1TB SATA drives. We were advised by Netgear that the standard supply in the NV+ is sufficient for the higher capacity drives. Nothing’s changed in the processor department as the NV+ still sports Netgear’s IT3107 storage processor and this is teamed up with 256MB of memory.

The appliance supports hardware managed RAID arrays and Netgear’s X-RAID technology enables you to upgrade capacity by swapping out each drive in turn for larger ones. Installation is handled neatly by the bundled RAIDar utility and then you can move to the slick web interface which opens with a quick start wizard that takes you through setting up shares and workgroup or Windows domain membership. Clients support is tops as Windows, Unix, Linux and Mac systems can use the appliance and it offers FTP services on selected shares.


Netgear provides plenty of backup features with scheduled snapshots taking point in time copies of selected volumes. Standard backup jobs can also be scheduled where you select a source on the appliance and choose a destination which can be a local location, another ReadyNAS appliance or a remote network share. You can select a USB device as a destination and this brings the Backup button on the front panel into play. You assign the job to the button and pressing it automatically secures selected data on the appliance to a storage device plugged into the front USB port. There’s more as Netgear includes a copy of Retrospect Express 7.5 which is an ideal candidate for automating regular workstation backup to the appliance. 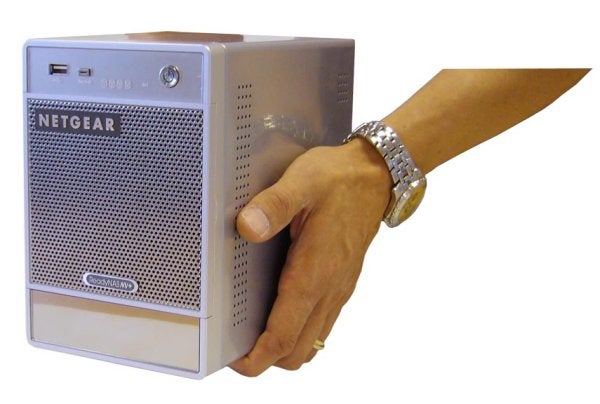 At the time of review Netgear was working on the next big firmware release and allowed us a peek so we can bring you a first look as what to expect. Naturally, the web interface gets the Netgear treatment and its responsiveness has been speeded up. Underneath this the Linux kernel goes from v2.4 to v2.6 and it brings in a stack of new features including support for volumes of 2TB and greater, improved USB device support including the NTFS file format, advanced X-RAID expansion, network UPS support, NFS over TCP and much more.


During testing we noted that some performance issues have also been resolved as FTP speeds have always been cause for concern. Prior to upgrading we used the FileZilla utility to copy a 690MB video from the appliance to a Supermicro 3.2GHz Pentium D workstation and back again over Gigabit Ethernet and saw 9-10MB/sec for both read and write operations. With the appliance upgraded these speeds improved significantly to 18.2MB/sec and 12.8MB/sec respectively. CIFS file sharing doesn’t get a boost with file copies returning a respectable 27.6MB/sec read and 15.3MB/sec write speeds on both firmware versions.


The ReadyNAS NV+ remains one of the best desktop NAS appliances on the market as it offers a quality range of feature highly suited to personal and business use alike. It’s competitively priced and our initial impressions of the next firmware release are very favourable as it promises plenty of valuable new features and a speed boost to FTP operations as well.

(centre)RAIDar find the NAS appliance for you which then presents a well designed web interface.

(centre)Shares are easily created and can have quotas assigned whilst USB devices can be automatically shared on insertion.

(centre)Backup options are very extensive and jobs can be run to a daily schedule.

(centre)This is what you can expect to see when Netgear releases the next firmware upgrade.”’