We’ve always been particularly taken by the desktop NAS appliances from Infrant Technologies with the compact and bijou ReadyNAS NV garnering a well deserved Recommended award thanks to its superb level of features and sleek design. Well, Netgear thinks the same as while we were looking at the latest ReadyNAS 1100 rack mount NAS appliance it announced that it had acquired Infrant Technologies.

This comes as no surprise as Netgear’s storage product portfolio is its weakest link as apart from the SC101 it has nothing to offer home users and small businesses looking for a standard NAS-based solution. This allows Netgear to present a well established desktop NAS product line and the latest ReadyNAS 1100 moves it into the equally competitive rack appliance market.


Netgear isn’t alone in this market as Thecus has also recently launched a slim-line rack appliance. However, the ReadyNAS 1100 benefits from more than a few design tweaks that makes it stand out. First up are its physical dimensions as this 19in wide box is a mere 12i. deep – Thecus’ new 1U4500 measures a full 22in from front to back. There’s room for a quartet of hard disks across the front all mounted in sturdy hot-swap carriers and the review system came with a full house of 250GB SATA drives. These are Seagate’s new Barracuda ES models which aim to offer increased reliability.


We’ve always found most half-depth rack appliances excessively noisy but not so with the 1100 as even with six cooling fans at the rear it’s surprisingly quiet. During testing we had the unit next to us on the bench and never found it intrusive. The hard disk backplane and motherboard are also separate units making it a cinch to remove the latter. Furthermore, the Linux-based RAIDiator OS is implemented on Flash memory so you can buy a diskless unit.

Last, but certainly not least, is Netgear’s ace-in-the-hole as it claims the appliance sucks up only 70-75W of power. To test this claim we hooked the appliance up to a PeakTech energy meter and watched it report a consumption of 68-70W in idle mode. Even a pair of Xeon 5160 servers running Iometer flat out on a mapped drive couldn’t push consumption past 72W. To put this in perspective we placed the meter on a standard Supermicro 3.2GHz Pentium D workstation and saw it drawing 105W in idle. With SiSoft Sandra pushing the processor to 100 per cent utilisation this peaked at an unhealthy 186W.

For installation the bundled RAIDar utility hunts appliances down on the network and presents them ready for secure web browser access. With the same OS in residence you’ll find the feature set is identical across all the ReadyNAS range. Consequently, you get the benefit of RAID0, 1, 5, hot-standby and hot-swap plus Infrant’s own X-RAID technology. The latter allows you to add drives whenever you fancy and the appliance will automatically expand the array into them.


There’s a lot to play with here as the 1100 supports Windows, Unix, Linux and Macintosh clients and provides FTP services as well. Three security choices are provided with the basic Share mode allowing access to be restricted with an optional password. User mode limits access based on local users and groups while Domain mode can use Windows domain controllers and Active Directory Services to authenticate users.

Although not so valuable to businesses the 1100 also supports a range of streaming services and we can confidently say the iTunes Server feature works perfectly as we’ve been using this on a ReadyNAS NV appliance for nearly a year now. Backup features are outstanding as you can schedule regular volume snapshots and general backup tasks that will copy data on the appliance to another local location, a different ReadyNAS appliance or a remote network share. For workstation backup, Genie Backup Manager gets the elbow to be replaced with EMC’s Retrospect Express 7.5. This is a far superior product as it supports agent based backup allowing multiple workstations to be managed from a single interface. The Backup button on the ReadyNAS NV is also in evidence on the 1100 and pressing it causes predefined folders on the appliance to be backed up automatically to the inserted device.


It’s all looking very rosy so far but the fly in the ointment is performance. Over Gigabit Ethernet, Iometer reported a decent raw read speed of 38MB/sec but in our real world tests this dropped to 19MB/sec when retrieving a 690MB video file from the appliance. Copying the file back saw write speeds of only 8.6MB/sec – reasonable but not as good as Thecus’ RouStor N5200. Netgear really slips up with FTP performance as we couldn’t achieve higher than a mere 3.5MB/sec read or write speed. Retrospect faired better with it securing a 5.3GB mix of data to the appliance at an average rate of 7.2MB/sec.


General performance isn’t the greatest but the ReadyNAS 1100 offer masses of storage related features and a brimming cup of backup facilities. Build quality is excellent and the reduced power consumption means Netgear will find it easy being green.

The RAIDar utility searches for ReadyNAS appliances on the network. 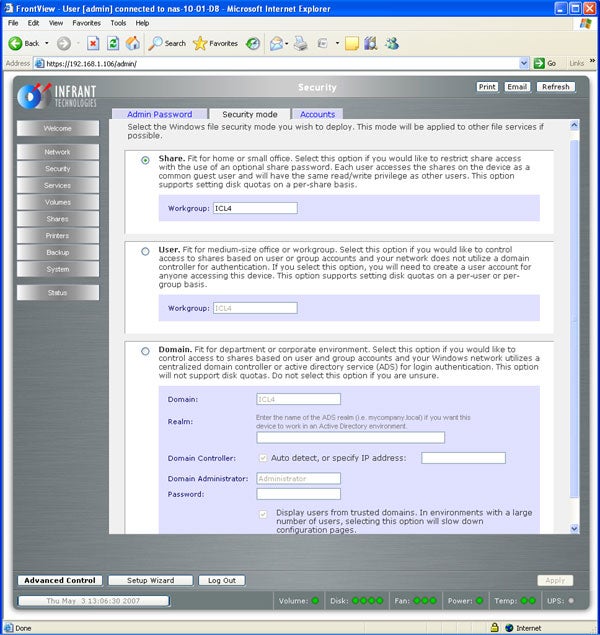 Security is extensive as there are plenty of access control modes to choose from. 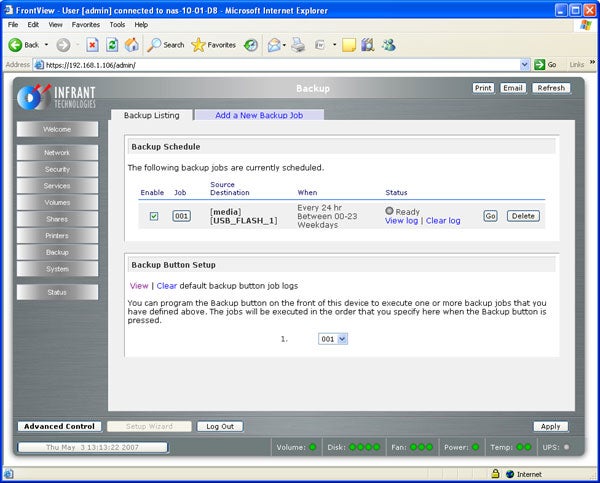 Selected backup jobs can be activated from the Backup button on the front panel. 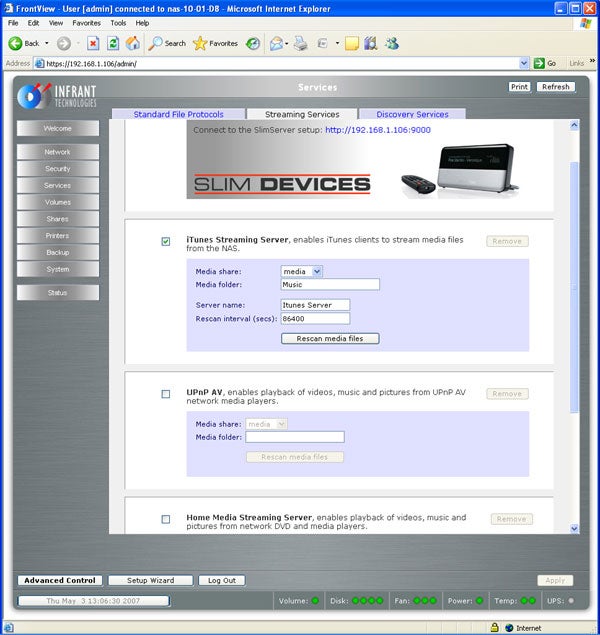 The appliance offers an extensive range of media streaming services.