Once as sure a bet for the Christmas number one as the X-Factor winner’s single, Need for Speed’s successful run fell apart last year with Need for Speed: ProStreet. Whatever the motivation behind it, the series’ switch from outlaw racer to legit arcade racing sim wasn’t appreciated by the fans, and it’s widely regarded as one of the weaker Need for Speeds. Unsurprisingly, then, Undercover is EA’s attempt to return to past glories; the urban setting, street style and focus on the illegal underground are a direct throwback to the days of NFS: Carbon and the NFS: Underground games, while the visual style gives more than a nod to 2005’s NFS: Most Wanted. Unfortunately, it’s not up to the same sort of standard. Frankly, it doesn’t even feel quite finished. 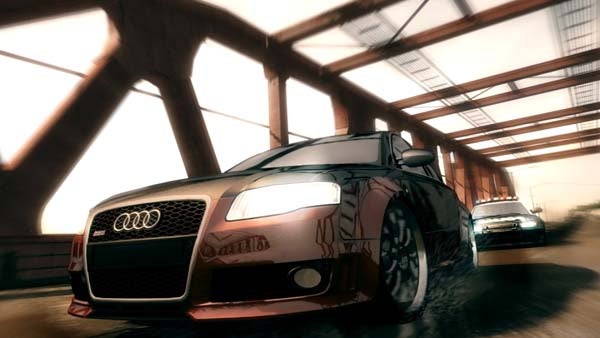 This time Need for Speed takes the route followed by many a TV programme or movie in which criminal activities are going to be made to look glamorous and exciting: the old undercover cop routine. In a series of video cut-scenes so miniscule that you suspect they were paying her by the second, Mission Impossible III’s Maggie Q briefs you on your continuing efforts to infiltrate a gang of car thieves/underground racers, giving you all the excuse you need to join their ranks and cause hundreds of thousands of dollars of damage to city property. The story isn’t brilliant, but you can see what they developers were going for – a sort of Miami Vice meets The Fast and the Furious as directed by a Michael Bay or Tony Scott. 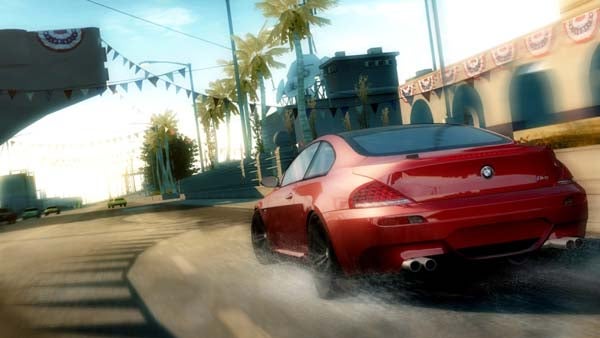 And you can see this influence in the visuals, which sidestep realism in favour of high-contrast, sun-washed imagery and lovingly modelled, over-polished vehicles that could have come straight from a car-porn magazine. Seen in stills taken at the right moment, NFS: Undercover is a beautiful racing game, and an almost perfect cocktail of the best style elements of Most Wanted and Carbon. The environment doesn’t seem designed to be a living, breathing space like Burnout Paradise’s Paradise City or NFS: Most Wanted’s Rockport; it’s more a canvas on which the game can paint its landscapes of headlight trails, speed blur and gleaming, pearlescent metal. 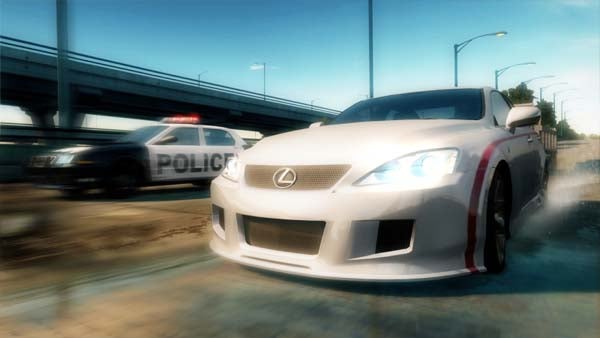 You can also see that this was a city designed to be explored. Like Most Wanted and Carbon, Undercover is an open world game. You cruise the streets looking for action, then join in races and police chases when the opportunity arises. Do enough to advance the plot, and you’ll get a mysterious call from some potential friend or foe asking you to show off your skills or join them on a caper. The urban setting covers several centres linked by a series of highways, and while some of it is a little generic, you can see that the designers have engineered some areas for fun, with unfinished raised highways offering an enjoyable string of jumps, and loads of civic spaces and industrial facilities providing shortcuts. Credit where credit’s due; the faults of Undercover aren’t faults of laziness or a total lack of imagination.

Nope. I meant what I said when I said that the game feels unfinished. Whether for technical reasons or lack of time, the streets are bizarrely empty during the majority of races. Barring rival racers, you might not see a single car for several seconds at a time; in fact, you can regularly drive in the opposing lane of traffic, safe in the knowledge that you’re unlikely to hit anything except the kerb or any railings at the side. Were the game set at 4am this might be acceptable, but a lot of it is set during daylight hours. Sure, during some events – particularly highway battles – the traffic ramps up considerably, but this just makes the other stretches seem all the more odd. 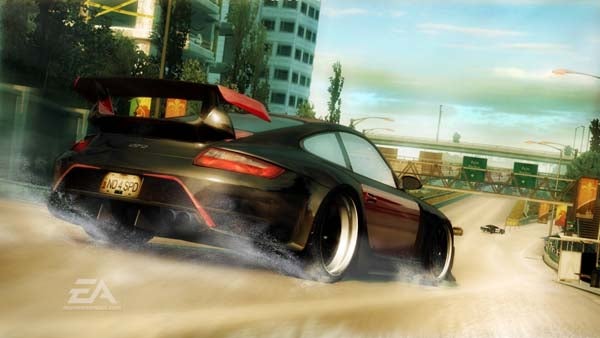 And this causes problems when you bear in mind what I said earlier about the city being a blank canvas. Because the architecture itself isn’t that interesting and the streets are devoid of personality, there’s really no motivation to explore. In fact, EA seems to have recognised this, because you don’t even have to make your way from one race to the next, you can just skip through from race to chase to race with a single press of the down direction on the D-pad. 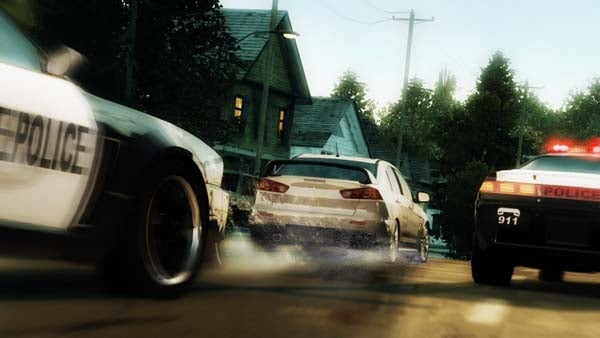 This in turn leads us to another shortfall: for a large part of its running time, NFS: Undercover is pitifully easy, and you find yourself practically sleepwalking through its steady stream of races and chases. I’m not some kind of ninja gamer or anything – and I’ve really struggled at times with the likes of Project Gotham Racing 4 or Race Driver: GRID – but I played through vast swathes of Undercover without failing a single race event. I crashed plenty of times, sometimes once or twice per lap, but I’d swear that you can see the opposition slowing down to give you a chance to catch up. Get in front in a decent car and they’re toast. One minute they’re taunting you, the next they’re not even visible on the mini-map. In roughly 85 per cent of the events in the early part of the game, there’s just not enough of a challenge to keep the action exciting.

The other 15 per cent? Well, this is the bit that Most Wanted and Carbon did best – the police chases. On top of the usual racing and outdistancing events, we get specific police chase events plus challenges in which you have to cause a specific amount of damage to city property (including cop cars). When it works, it’s brilliant, as you storm through the streets, wreaking havoc wherever you go and evading capture by a whisker every thirty seconds. Unfortunately, it doesn’t always work. One of the problems with the ‘Cost to State’ missions is that you have a five minute time limit in which to cause your damage, and then lose any cops still in pursuit. In a few cases I actually struggled to round up enough cop cars to do the necessary damage before four minutes or so were out, leaving me with less than a minute to get rid of those I’d finally dragged into my wake, and none of those handily placed fragile structures/piles of pipes/poorly constructed billboards with which to do it. When this results in failing time after time, the fact that the rest of the game is so ludicrously easy only makes it more frustrating. 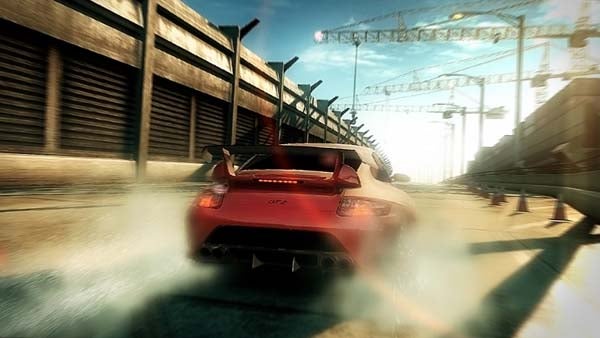 This sort of thing is typical of Undercover; it has some great ideas, then blows them with shoddy execution. This even follows through when it comes to technical issues. You’d think that with the deliberately clean style and the lack of traffic on the road, you’d at least get huge draw distances and a solid 60fps frame rate. No such luck. Objects pop into view on the horizon on a reasonably regular basis, while the frame rate judders painfully on some corners, and even during some of the pre-race cut scenes. Again, it leaves you with the impression that you’re playing a half-finished product. 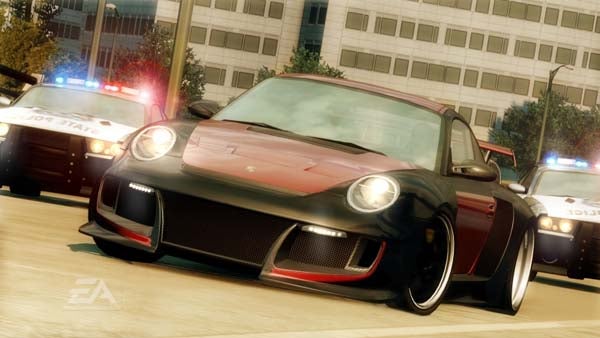 I don’t want to be completely damning. Undercover does have some other things going for it, such as a decent line-up of real production cars (one advantage it has over Burnout: Paradise), some solid multiplayer options (including a team-based cops vs robbers mode) and some sex appeal in the shape of Christina Milian (who, unlike Maggie Q, isn’t constantly shown in silhouette). All the same, you can’t help feeling that EA had a game with the potential to put the series back on track, but somehow kludged it. It actually depresses me to think that this is currently at number five in the UK all formats games chart, and that this means a lot of people are going to end up with it sitting under the tree on Christmas morning. When games like Burnout: Paradise, Midnight Club: LA and even Need for Speed: Carbon offer a similar but superior experience, that’s not just a shame – it’s inexcusable. 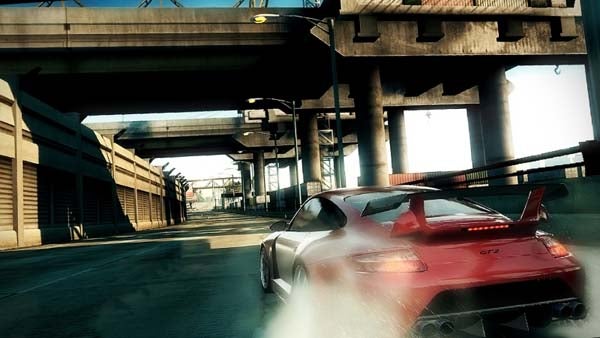 
Undercover had the potential to be the best Need for Speed this generation, but blew it with a range of design and technical issues. Unpolished, unexciting and seriously disappointing.