There’s an old joke in ”The Simpsons” that if Meryl Streep had a perfume, it would be called ‘Meryl Streep’s Versatility.’ The NEC VT-800 isn’t quite as flexible as the multiple Oscar winner/Mamma Mia star, but it’s not far off. While it doesn’t offer cutting-edge resolutions, an ultra-mobile package or a bargain basement price tag, it does pack in a fine selection of features that make it an effective presentation tool and – on the sly – after-hours entertainer. It’s flexible enough to work in a range of environments, and it’s easy to get up and running. Yep, ‘versatile’ pretty much sums it up.

Let’s start with the business stuff first. It’s true that the VT-800 is a little behind the curve with its bog-standard 1,024 x 768 native resolution, and also that it’s not the most svelte or glamorous projector in town, but it does have a couple of features that make up for it. First, while you can still relay presentations directly from a PC or laptop via one of the two VGA ports, the VT-800 has a couple of more unusual ways of getting slides to screen. The first is the USB port, with the projector displaying files directly from a USB memory stick. Cleverly, NEC bundles in a utility that converts PowerPoint slides to JPEGs. The second feature is more interesting and potentially more useful. One of the many connections at the back of this fairly bulky white box is an Ethernet port. Hook the VT-800 up to your network then install NEC’s Image Express utility on a PC or laptop. Connect that PC up to the same network and you can display the image on your PC screen through the projector without any direct video connection. 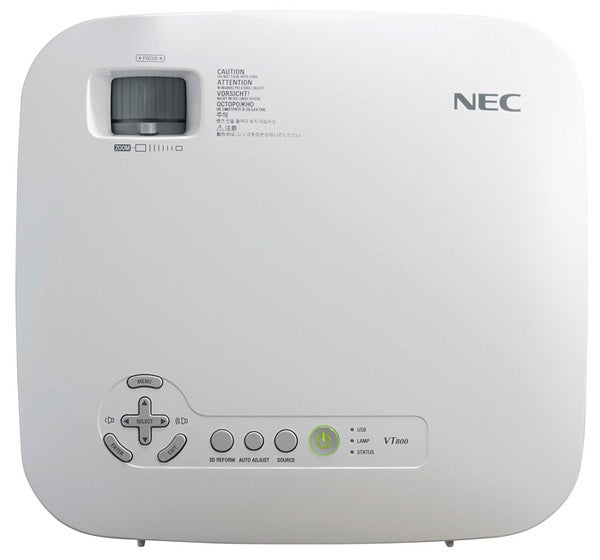 It’s easy to set up and, more importantly, it works. With the VT-800 plugged in and a laptop hooked up to the network via an 802.11g WiFi connection I experienced slightly less than a second of lag while switching slides or opening and closing windows. Meanwhile, the compression algorithms used to transport the data (and the slow speed of the connection) resulted in some minor artefacts in SD video, not to mention the odd glitch or jerk. All the same, I can see this being a real boon in companies where a single conference room might be shared by several teams or individual employees. You don’t need to put your presentation on your laptop and take that down to the projector; you just beam the image through the network from your regular system. Cunningly, an additional piece of software (or just the remote desktop features built into higher-end versions of Vista) allows you to control the presentation on your desktop using a USB mouse plugged into the projector. Very slick.

Other business-friendly features reflect the fact that you don’t always get to present in ideal circumstances. The VT-800 will perform perfectly well with a throw of as little as 0.7m, filling a 50in projector screen at a distance of around 2m. For those times when you don’t have access to a screen, it includes a series of preset colour balance fixes for different coloured walls. And for occasions when you don’t have time to adjust the image to the point of perfection, a quick and dirty auto-adjustment feature, not to mention automatic keystone correction, should sort you out. Meanwhile the 3D reform feature does an excellent job of squaring the image when you’re unable to put projector or screen in the optimum position. In fact, ease of use is a real strength all-round. The button layout is sensible, the menu system clearly navigable, and NEC also bundles in a fine remote control.

As a data projector, the VT-800 excels – provided you can stomach the fact that it has fewer pixels horizontally or vertically than anything but the most bargain-basement laptop. For presentation purposes, this isn’t a disaster, and the VT-800 has other things than resolution going for it, namely excellent clarity, a fine control of geometry even at the top end of the zoom control and a strong, bright image with plenty of contrast. 2,700 ANSI Lumens means bright whites and strong, vivid colours, even in reasonable daylight or normal artificial lighting. And while the 500:1 contrast level might not sound like much when some home cinema projectors are claiming 12,000:1 or more, it’s a realistic figure and still allows the VT-800 to differentiate darker shadow tones in photographs from deeper blacks. It’s also worth noting that you can extend the lamp life from 2500 to 3500 hours and make the projector an awful lot quieter by switching the lamp to the 2160 ANSI Lumens Eco mode, and the reduction in brightness really isn’t all that drastic.

Beyond the business stuff, the VT-800 has some other tricks up its sleeves, and these are exactly the kinds of tricks you’ll appreciate if you’re the sort of person who’s inclined to make use of work resources for, ahem, not-so-work-related activities. Just take a look at the connections at the back. As well as the twin VGA connectors you’ll spot S-Video and Composite connectors (while the VGA ports will also work with Component Video adaptors). The star of the show, though, is the HDCP-compliant HDMI port. Through this the VT-800 can accept HD resolutions up to 1080p, plus audio. This, in concert with Silicon Optix’s HQV video processing and scaling technology makes it one of the more movie-friendly business projectors in town. I’m sure all the noise reduction, adaptive de-interlacing and detail enhancement processing technology included in HQV helps make business video presentations look their best, but it also does wonders for other video content.

Admittedly, the XGA LCD panel means that you’re not really getting Full HD or even a proper 720p resolution, but the HQV processing does a great job of disguising that fact. Connecting my Xbox 360 Elite via HDMI, I ran through a selection of DVD, downloaded movie, and game material and the results were consistently impressive – to the extent that I had to re-check the specs just to ensure that the XGA resolution was correct.


LCD panels still have a bad reputation for producing muddy grey blacks and differentiating between darker tones, but while the black level isn’t as deep as it might be on a good DLP home cinema projector, the VT-800 still did an excellent job of handling the night fight between Spidey and an airborne Harry Osborne in ”Spider-Man 3”. 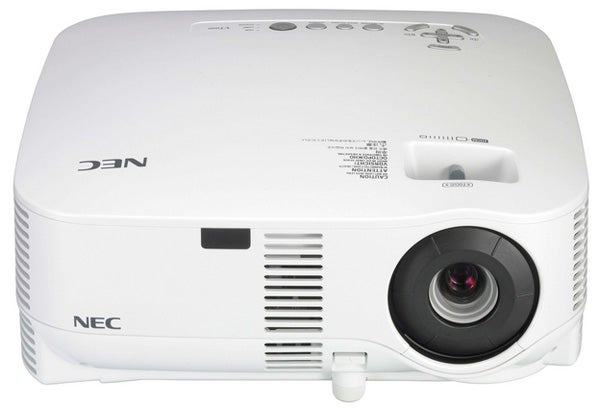 A quick session of Ninja Gaiden 3 showed that this business projector can also deal with the rapid motion, high detail, rich colour and spurting claret the game is famous for. Race Driver: GRID, meanwhile, was a horrendously high-octane experience, the beautifully modelled motors glinting gorgeously in the sunshine as they speed towards the next collision. If you want a projector that can handle a little play on top of work, then the VT-800 will certainly do the job. Or help you avoid doing your job, come to that.


Of course, it’s not alone in this and the one fly in the ointment is the existence of the Infocus IN35W, which packs in a more HD-friendly 1,280 x 800 resolution and an excellent DLP engine at a very similar price. What’s more, while the VT-800 comes with a shoulder bag, its 3.7KG weight means it’s nowhere near as portable as the 2.27Kg Infocus. That said, it does have the networking features and built-in HDMI, where the Infocus would require an HDMI to DVI cable.

In the end, it all comes down to how much you value the NEC’s versatility against the Infocus’s higher resolution. If you don’t need the networking features (or can plump up the extra for Infocus’s LiteShow Wireless projection adaptor) then the Infocus still has the edge, but if I were in the market for a strong business projector with the potential for a little play, then the VT-800 would still be on my shortlist.


Despite its XGA resolution, the VT-800 combines a strong performance as a business projector with excellent networking features, strong connectivity and surprisingly good HD and SD video playback. Even given strong competition from the WXGA Infocus IN35W, it’s still well worth considering.